I needed a bit more space to expound upon the rules than what Gab provided in the sidebar, as well as some general usability tips, so I figured I might as well create a whole page here, and link it on the group itself for easy access.

Firstly, let me introduce you to the mod team. It consists of myself, @BasedNrd (aka BurialSociety), and @Guild. Based and Guild are great people who volunteer their time freely, so show them respect. The easier you make their job, the happier they’ll be.

If you do any of those things, you will be reported to Gab’s admins, and you will lose your account.

I’ll also add here, don’t post any gore. Personally, I’ve seen worse than you can imagine, both IRL and online, so you won’t be successful in getting me to throw up, but nobody else wants to see that.

The big thing you need to understand about the group is that it’s primarily for discussing QAnon-related subjects. I realize this is a wide umbrella, and we mods generally pretty laissez-faire when it comes to different posts, but at a certain point, we need to strive to stay on topic. Yes, we realize you probably support POTUS and can’t stand Obama. No, we don’t need to see another pixelated meme ripped from the church’s knitting group page on Facebook. 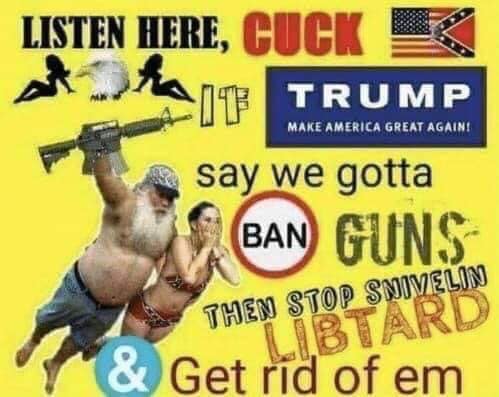 So stay on topic. This group is for research, discussion, and the occasional kek or two.

It’s not your personal platform for crappy memes that only serve to preach to the choir.

Bad memes push good research off the page – and since fostering research is the goal, bad memes will be summarily removed from the group, since they’re competing for screen real-estate with research posts.

Repeat offenders will be warned, and if they don’t fix their ways, removed from the group.

Likewise, I’ve recently seen a rise in cheap “attention-grabbing” tactics. What I mean by that is, someone will post something old, or boring, or irrelevant, and frontload the post with a ton of emojis to make other people think it’s important – or WRITE THE ENTIRE POST IN CAPITAL LETTERS AS THOUGH THEY WERE SCREAMING AT THE TOP OF THEIR LUNGS.

If you do these things, I will personally send you back to remedial netiquette school. Honestly, learn how to function online before coming into my group, acting a fool, and then getting indignant when I tell you to knock it off.

And that’s another thing: if I correct you – the smart thing to do is accept the correction. Unless you’re doing something intentionally out-of-bounds, you’re just getting a slap on the wrist. Fix your behavior and move on. You will not get special treatment if you throw a tantrum and try to “call me out” in my own group.

The group has been around for the better part of a year now, and as of this writing, has over 7000 members. We do not need to change for you. You need to lurk more, get a feel for the culture, and integrate.

You know, just like how you expect legal immigrants to integrate when they move into a new nation. You expect them to learn the language, customs, and practices of the people who were already there. They don’t unbuckle their belt, drop their drawers, and then get to take a dump on the sidewalk – only to get mad when the police taze them.

Really, we just want to keep the group as useful and functional as possible. The group is a great resource, and it’s one of the many reasons Gab has been targeted by the Radical Left for deplatforming, time and time again: because they want so desperately to shut us down.

Some other banned behaviors:

No #JFKJrLives posting. That’s banned, outright. Accounts that engage in this will be insta-banned from the group.

Do not promote paid products to the group. Yes, I sell hats/t-shirts/and soon, my own book – but those are through my own profile and site. Even I don’t promote my own products through the group. The purpose of the group is to share research and build the QCommunity – not to make a quick buck.

Don’t harass anyone. You can disagree on subjects, but keep it at an intellectual level; not a personal one.

Moderation is done on a case-by-case basis, and at the sole discretion of the mod team. We’ve cultivated something pretty special here, and all mods are empowered to make executive decisions to protect this community and foster high-quality discussion.

When Q makes posts, it’s a bit of a feeding frenzy in the group. You’ll probably see multiples of the same drop, posted by several people. It’s not a huge deal – but if there’s one person who is available to post, let them do it. No need to double, triple, or quadruple up.

There is a standard format for posting screenshots of QAnon drops.

Here is an example of what a Qdrop formatted in the standard format looks like: 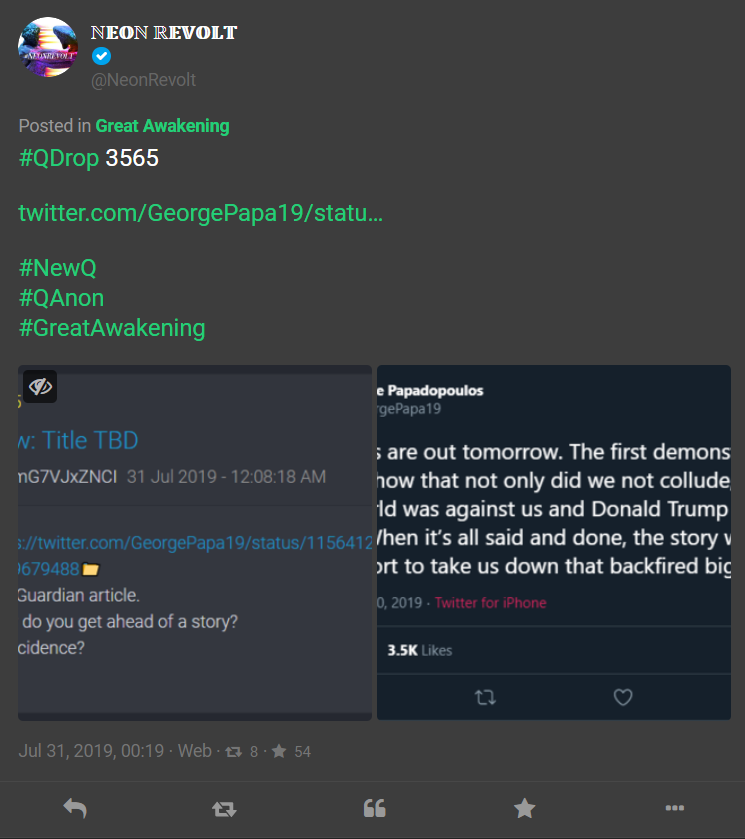 Essentially, each drop must be formatted with the drop number, a section for links, the three hashtags below it, and a screenshot of the drop, and anything relevant in the drop itself.

Take your screenshot from an aggregator (I prefer QMap.pub).

Include any screenshots Q might include, or screenshots of relevant links (for instance, Q often posts static tweets. It’s best to grab a screenshot of those posts, and post them alongside the drop itself.

That’s really all there is to it. The hashtags and enumeration are essential, to help people searching and sorting through particular drops.

There’s really only one usability tips I have right now for the group, and that’s turning off the comments in the main feed.

The standard way Gab displays posts in the group is like a firehose blast. It shows you everything.

To make it so only the top-level submissions show up in the main group feed (excluding comments), you need to tweak an easy setting.

Just click the little “hamburger menu” at the top of the feed, and turn off the replies. That’s it! Hit the hamburger menu again to close the slider. You’ll get a feed where you only see top-level submissions if you do this. And if you want to see the comments on a particular post, just open the post like you normally would – by clicking on the timestamp.

That’s it for now, folks. If you can abide by these rules, you’re welcome in the group.

If you can’t, well… you can always make your own group (or find another), I suppose. Yes, Gab is a free-speech platform, but freedom of speech goes hand-in-hand with freedom-of-association. You don’t get to force anyone to listen to you, especially if you’re being disruptive or otherwise breaking the rules.

Thanks for helping me and the mod team make the Great Awakening group great!