The Indiegogo is OFFICIALLY OVER! Over the course of 25 days, we raised over 158,000 dollars. We’re now working on getting this book finished and printed, and into your hands.

And if you missed the Indiegogo, don’t panic. You’ll just have to wait a little longer for the official retail release!

I’ll announce more as the time draws near. Stay tuned!

The INDIEGOGO Pre-Order campaign for Revolution Q is NOW LIVE!

The campaign will run for a total of 23 days, and this will be the only way to get your hands on a copy for quite some time!

So head over to Indiegogo to join the pre-order, now! 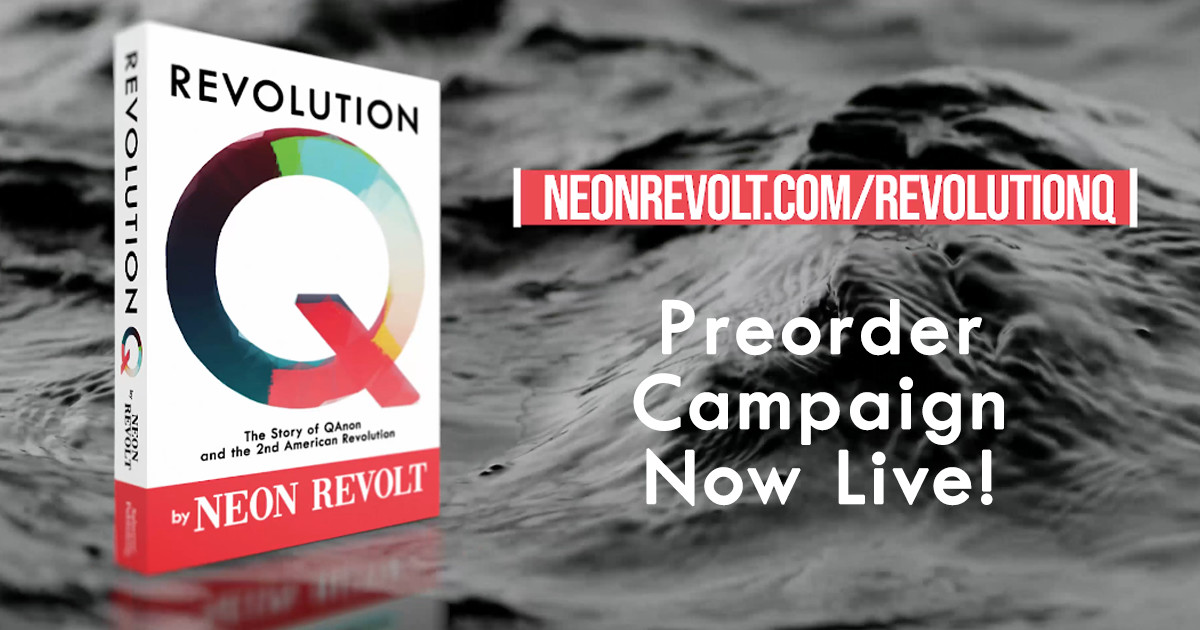 Welcome to the Revolution

Many reading this will already be familiar with who I am, but for those who are stumbling across this page for the first time, my name is Neon Revolt, and my work over the past two years has been to predominantly follow and document the exploits of a Military Intelligence figure who posts intel drops online, and who goes by the name of QAnon. During that time, I’ve written close to 500 articles on the subject of Q and the broader Q-movement, and came to understand that this movement would greatly benefit if it had a comprehensive book at its disposal; a printed resource you could hand off to a friend to help them understand what’s really happening in our nation and around the world.

So that’s what I set out to try and write.

Revolution Q: The Story of QAnon and the 2nd American Revolution is the culmination of over a year’s worth of writing and research. I’ve taken over 400 jam-packed pages to delve into the world of Q, and present the most explosive information in the most approachable, and understandable way possible. Here’s a preview excerpt from an early chapter, where I explain where the term “conspiracy theory” came from, why it’s used, and how it affects our perceptions of things:

Across nine chapters, we explore all manner of topics, starting with the origins of QAnon and the history of the wild, raucous boards populated by the Anons – all to give the reader a fuller understand of why Q finally appeared when he did. We then begin to explore the plans that the Cabal had laid, as well as Q’s plans to counteract them and save humanity. After that, we trace prominent families and bloodlines through world wars and revolutions, all gain a better understanding of this ancient death cult whose origins lie in antiquity. We dissect the mechanisms and tactics they employ to maintain their hegemony over the population and then, knowing what we now know, we place modern events in this historical context, to gain a deeper understanding of why certain events occurred when they did. And finally, we look to the future, to the disclosures, the revelations, and the “golden age” presaged by Q.

(Oh, and you might just learn a little bit more about me as well, in the process).

It’s been quite a journey, getting this book across the finish line. And much like what Q has done, I’ve had to bypass every single traditional communication channel, and come straight to the people.

And that’s why I need your help to get it there.

This is Where (You) Come in:

I always knew a book about QAnon would be a difficult sell, but I never anticipated that there would be this many hurdles involved.

Even my literary agent was shocked. (Yes, in the course of writing all those articles for the past two years, an agent took notice when they heard about my initial plans to write a book, and decided to represent me). When I finished the first draft, my agent took the book to all the major relevant publishing houses (of which, there are only a handful to begin with), and while 5 out of the 6 loved it…

They were all too petrified to publish it.

The President of the biggest publishing house even said,

“If any of this starts happening, come back right away, and we’ll pay whatever we need to for it.”

Well, sorry, but History can’t wait for them to catch up and change their minds!

That’s when we decided to forge ahead and tackle this thing completely independently.

We also had to find an independent printer who was willing to work with us.

We did – and they’re absolutely great. They print millions of books every year, and will be printing and distributing this first run of Revolution Q.

What’s more is that we will be bringing this to you in full-color, with a “French Flap” style cover. Cost-wise, hardcover was just way out-of-reach at the moment since we’re doing this independently – so a choice had to be made:

Did we want a hardcover? Or did we want full-color print?

There are over 400 images in this book, so believe me, full-color was absolutely the way to go here.

That said, a French Flap is a fantastic middle ground between paperback and hardcover. Think of it as a “deluxe paperback.”  It’s sturdier. It looks great. And you’ll get a lot more mileage out of it than with your typical paperback.

And because we anticipated censorship from the likes of Amazon, we’re bypassing them completely. To be clear, we’d love to be on Amazon, and may still land there at some point in the future, but that may also never happen. And if it does, who knows how long it would be before they decided to burn my book, like so many others of late.

So how does this campaign work?

Essentially, you’re pre-ordering Revolution Q when you contribute during the crowdfunding campaign, bypassing all traditional retailers and ordering from me and my distribution team directly.

I don’t know when, if ever, the book will hit store shelves, so this may literally be your only chance to snag a copy for a while. (Obviously, I hope we’ll be able to sell through more traditional channels at some point, but I can’t guarantee that right now).

The book is in full-color, with the French Flap cover, and starts at 25 dollars for a single copy (plus shipping).

But I realize a LOT of people want to be able to buy more than one copy, usually to give them away, so there are bundles available. The more copies you buy, the bigger the discount.

The campaign runs for 23 days, and the books themselves will take 4-6 weeks to print. We expect them to start shipping sometime in August.

The biggest challenge in doing all this independently comes from reaching the minimum number of orders necessary to make this cost effective. My goal here is to sell roughly 1000 copies of the book (basically, a 25,000 dollar threshold, when you factor in the discounted packs).

If I can’t reach that minimum threshold, the book can’t be printed.

But I’ve got amazing readers who are hungry for this book, so I have no doubt we’ll exceed this threshold.

Other than that, there are the typical challenges that come along with printing and shipping anything, but I’ve got a smart team dedicated to getting this all out in a timely manner, and I’m always able to be reached to hear any concerns

Of course, there’s also the wildcard of Q himself. Long-time followers know that Q has said that there will come a point where the entire Internet goes dark for a while.

If that happens during the campaign, there might be a delay as we figure out work-arounds – but we won’t be the only company affected by such a blackout, not by a long-shot!

But then again, that’s also another reason why I wrote this all in the first place, so everyone could have a physical copy when the net goes down!

Lastly, there’s the issue of things being outpaced by the news. I tried very hard to future-proof this book, and will be editing and tweaking things right up until the day we go to print, so I don’t see that being too much of a challenge.

Guys, I can’t stress this enough: this campaign will live or die based on your ability to help promote it.

SHARE SHARE SHARE the video and the links to the campaign wherever you can. There are tools built-in to Indiegogo that will allow you to do this on social media quite easily, but I ask that you share it in groups you’re in, on Facebook, on Twitter, across Youtube, on discord servers, on Gab, MeWe, Minds, and on literally any other platform you can think of. Try to get someone you know to contribute; at least one person.

I really want to hit my minimum, but I think the potential for this book is through the roof. The more copies are ordered, the more on the back-end I’ll be able to print. And then we’ll be able to start pushing it through more traditional channels, which means… you might end up seeing Revolution Q come to a corner-bookstore near you very soon indeed.

Guys, that’s all I have to say about the book for now. I’ve poured my heart and soul into this project, and I’m really excited to finally be able to get this out into the public sphere. It’s been a long road, full of unique challenges, but we’ve managed to overcome each hurdle along the way. I hope you’ll partner with me for this next phase, and support the Revolution however you can.