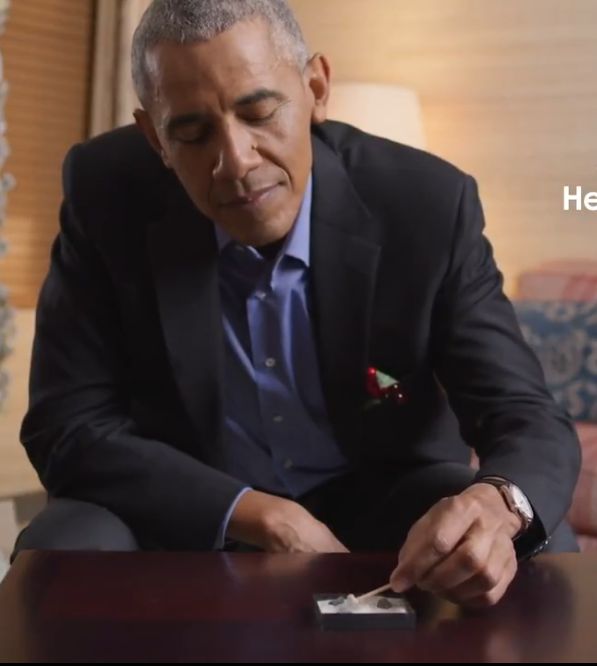 Kind of excited to share this. I was initially thinking about posting this to Gab, but stayed up extra early to give this the screenspace it deserved. Because I think I’m on to something potentially very big here!

Remember how Obama hid a comm in the Jimmy Kimmel RED video, with Bono? And then it was followed up with a meeting request on the RED website (for those who understood the comms and knew where to look?) 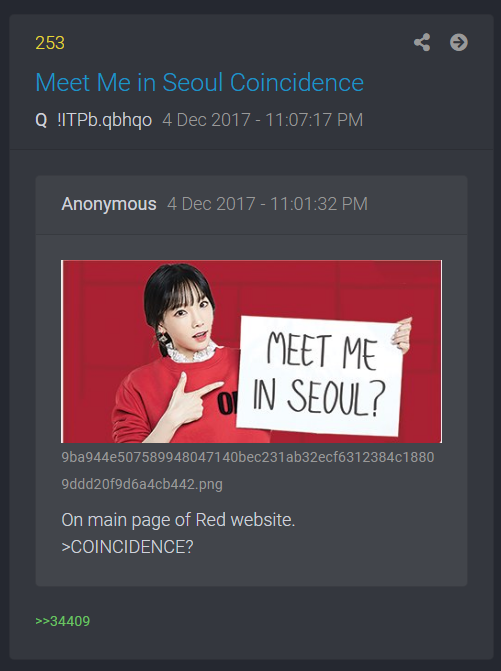 Earlier today on a whim, I decided to check out the social media pages of some Swamp-types, and I stumbled across a video Michelle Obama had posted on the 9th of December to her twitter page.

She was evidently in Vietnam! This was part of the Obama’s trips to the Asian-Pacific region, because they were hosting their “Obama Leaders: event in Malaysia.

And she was raising money for the “Girls Opportunity Alliance” – which is part of the Obama Foundation – using GoFundMe.

Support Girls Opportunity Alliance projects around the world on GoFundMe

Join Michelle Obama, Girls Opportunity Alliance, and GoFundMe to empower girls through education and support changemakers across the world making a difference.

But I was operating on a theory now: if the Obamas were trying to raise money… what was being offered?

I wanted to know.

Maybe I could find out by looking at who donated. I looked first at the big donors for any clues.

Only two stood out: Ellen and Michelle herself. And these were very much self-promotional kinds of donations:

No, if someone was trying to donate a lot of money in a clandestine manner, they’d probably break it up into lots of smaller donations and use fake names to hide their tracks. I went through all the donors and didn’t find anything that would be useful there.

I decided to do some more digging on the main page for the Girl’s Opportunity Alliance itself:

The future of the world is only as bright as our girls.

The first thing that stood out like a sore thumb was the drawing of a lotus on the wall behind Michelle, drawn in crayon. 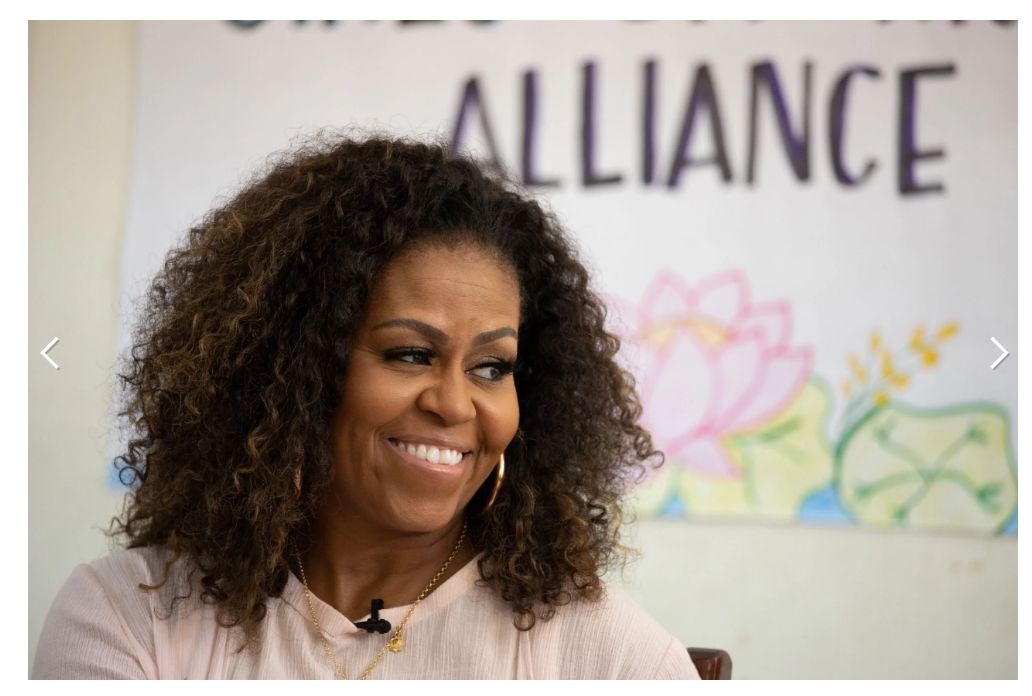 “Flowers and Gardens” are a concept Q-readers should be familiar with by now. Were the Obama’s selling off girls from the Asian-Pacific region? Was that what this fundraiser was all about?

Seemed a bit… idk, too low level for them. They don’t strike me as the kinds of people to traffick themselves. Oh, they may facilitate it and support it, but they’re not dealing with the logistical side of things.

Having hit a dead end, I jumped over to Barack’s twitter page to see if I could find anything related to this.

Lo and behold, Barack had a strange video uploaded as well:

Now this was an odd video. THIS looked so much like coded comms… I needed to figure it out.

And so I went to Gab, and started working on trying to decode what I thought was going on. And major h/t to @amjurfinah here who joined in and started making a lot of these connections. What you’re about to read is the result of our back-and-forth conversation about the topic.

So get ready to listen carefully to what Obama says in the video above, because we’re going to dissect it.

And just a word-of-warning before we dive in. This is a potential decode; not an authoritative one. I’m not trained in this, and I’m just operating by instinct, so there may be things I either misinterpreted or missed entirely. However, I think we have a very good lead here, and if Q wants to help us flesh it out, or confirm any findings here, that would be amazing.

Okay, so here’s the potential decode on the Obama Comms:

The first thing to note is that Obama posts this first video on the 10th of December: 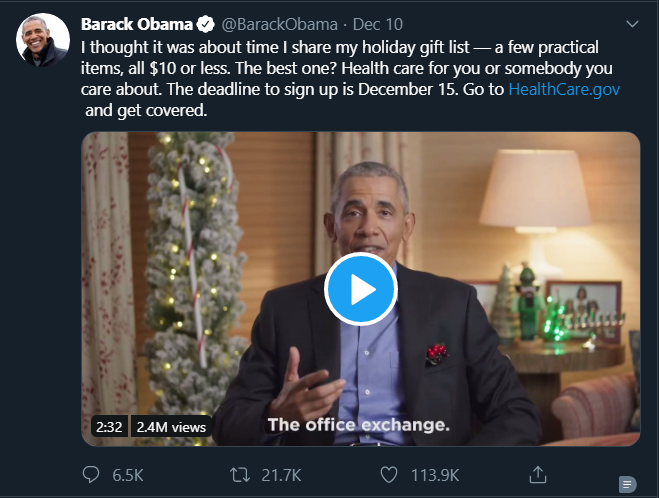 Obama also repeatedly says “less than ten” in the video.

See, the background to this is that the Obama Foundation was having its “Obama Leaders” event in Kuala Lumpur, Malaysia that same week. And of course, from the post below, and the video above, we also know that Michelle had been in Vietnam. 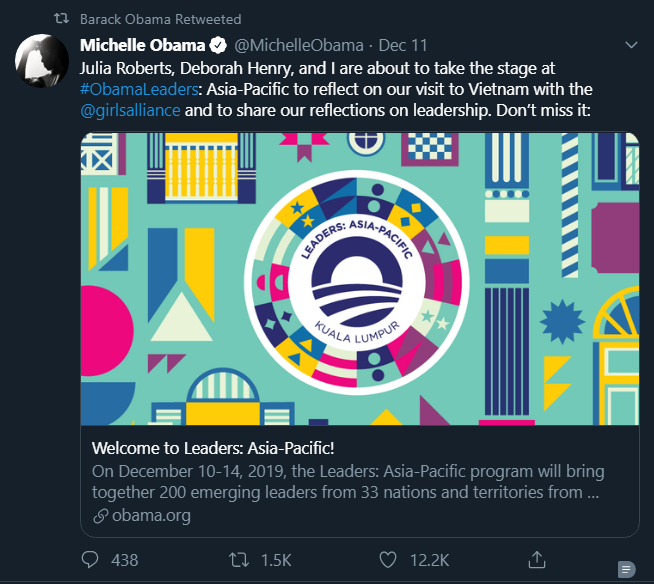 For those who may need a geographical refresher, Malaysia and Vietnam are a stone’s throw away from each other:

It’s really easy to get from one country to the next, very quickly.

So the first part of our decode is Obama signalling that he’s holding a meeting in less than 10 days.

Next, in the video, Amjur noticed in that there was a sweatshirt featuring Obama’s dogs (read: Cabal/Clowns/CIA/Trump calling people “dogs)” and the National Archives Museum.

Abbreviate that and you get NAM. Vietnam! I believe this was the signal for the meeting location, and it’s more than coincidental, given Michelle’s travelling schedule. 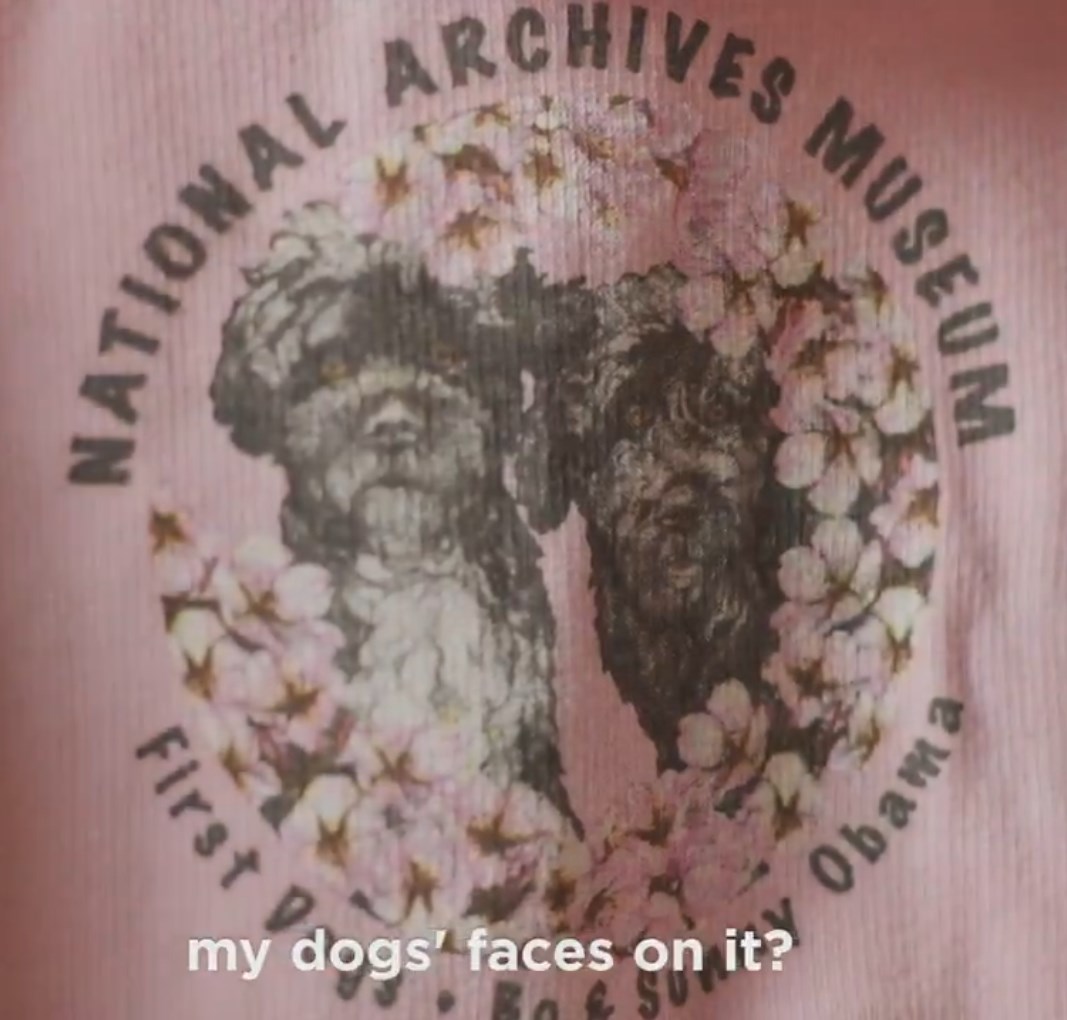 So now we have a timetable, and a location for the meeting.

Scroll back a bit, and you have the “Green Goblin” holding a wad of cash in Obama’s video. 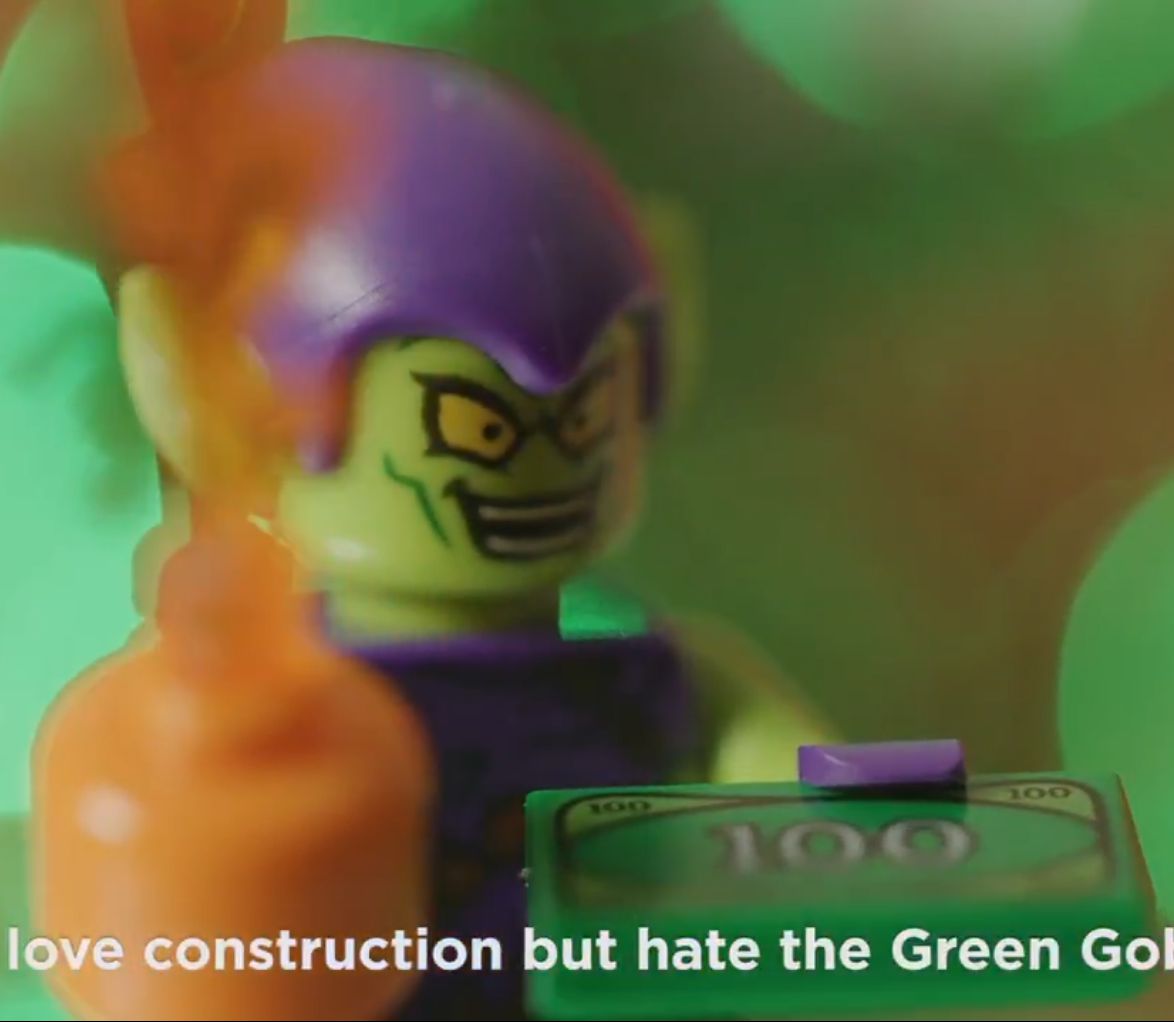 Is this a signal naming the price of admission for the meeting? (This would tie back to the GoFundMe). It seems possible.

So now we have time, place, and potentially price of admission. These are all the basics anyone would need to know if they wanted to meet with the Obamas – for whatever clandestine reason they may have.

But what might that reason be? Does the video tell us?

Obama references the zen garden he advertises in the clip twice during the whole video. I believe this is the core of the signal he’s trying to send.

Obama attempts to look relaxed in as he plays with the garden, and can be seen pushing a rock around at the end of his video. Amjur noticed that the rocks in a zen garden are called ishi, and represent mountains (strength/power). 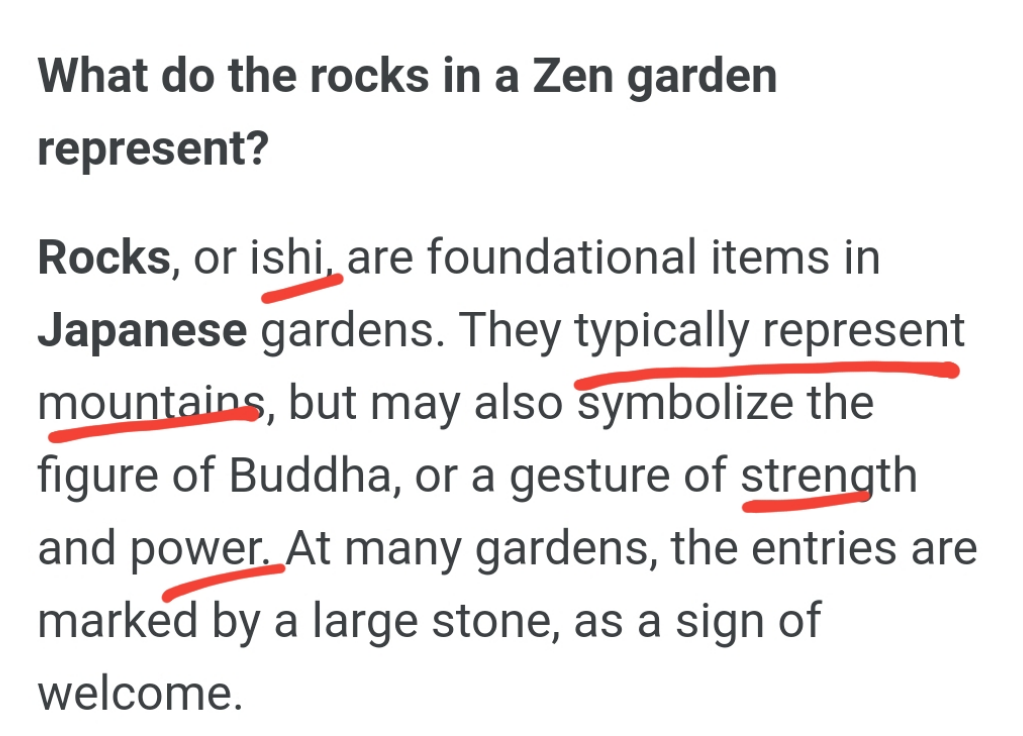 I think the message is pretty clear here: Obama is trying to show how he’s still in charge, and capable of “moving mountains” ie, dealing with the threat of Trump in a calm, collected manner.

And I can’t understate the inclusion of the “Garden” imagery again – both in Barack’s video, and on Michelle’s website. Remember, this was at a place where Michelle potentially had access to many young Asian girls (and boys, I suppose, but only girls are shown in the video, and “flowers” typically only refer to girls).

Which actually brings us back around to Michelle:

Michelle then posts another video of her in Vietnam on the 20th, ten days later, with some A-list Cabal-affiliated types – Jenna Bush, and Julia Roberts:

Again, note the timetable. Obama’s “invite” went out on the 10th saying “less than ten” over and over, and Michelle’s “confirmation” video goes out ten days later, on the 20th.

I think it’s really telling that Jenna Bush is present on this trip. I’ve never seen her as a serious Bush. More of the coke-fiend, party-girl-raised-in—privilege-kind (yes, Jenna, if you’re reading this, we know about St. Charles, so don’t try to deny it). Perhaps she’s acting as a messenger in this scenario – possibly on behalf of her father. Who would Roberts be the courier for? I’m not 100% sure right now, but Hollywood is obviously represented by her presence there. Geffen springs to mind, but I have no reason to suspect this beyond circumstantial theories.

So what was Obama trying to coordinate here, exactly?

Well, let’s review the facts and some questions they lead us to ask:

But again, despite the attempts at humor and trying to maintain a calm disposition, this reads to me more like a last-ditch effort to coordinate whatever kind of resistance Trump they can muster at this point. They’re not in a power position, and you can read it on their faces in almost every frame.

Man… I feel like we’re catching on to this a bit late, but I suppose ultimately we’re only a couple days after all of this has unfolded. I just gotta think these are comms going on right beneath our noses, given some of just the verbal oddities going on, and the semiotics seemingly situated beneath the surface in these videos.

Obama has operated in this manner before, as we’ve all seen, and I think we’re seeing it all play out again, before our very eyes.

The only difference is, this time we’re keenly aware, and able to see through their messaging. A Great Awakening, indeed. 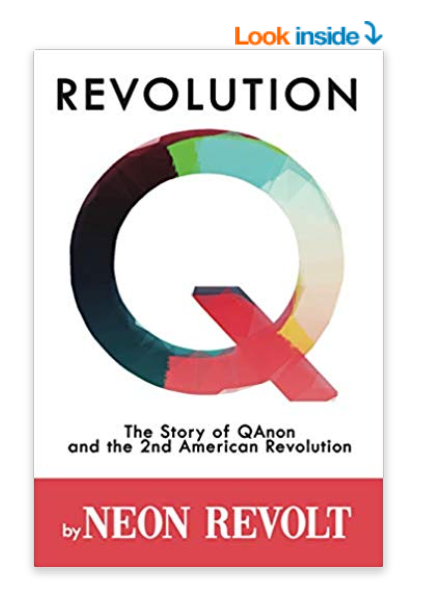 Okay guys, that’s it for this article. It’s shorter than my last one, which if you haven’t read yet, you can catch by clicking here: https://www.neonrevolt.com/2019/12/21/the-enormity-of-the-implications-of-qanon-greatawakening-neonrevolt/

Reception to that article was outstanding, receiving hundreds of comments as it grapples with some very meaty subjects, so if you haven’t read it yet, I hope you come with a hungry and open mind, because there’s a lot there to digest!

And of course, guys, I have to shill my book here. Revolution Q – if you don’t have a copy already, you should probably pick one up! It’s a tremendous resource into which I poured over a year’s worth of work and research, packing it full of as much valuable content as I could summon in this volume. And I have to say, the reaction to the book has been overwhelmingly positive.

Take one review from a reader who picked up a Kindle version, entitled Read this book!

“Since “awakening” this past spring, I have read & listened to many articles, videos & opinions about *Q*. Some have been broad in scope, some more focused, some questionable. If you sense the oppression, (spiritual & otherwise), ongoing corruption and inequality that surrounds us but have no answers or understanding of why/how, or what’s next, this book is well written and comprehensive. Neon Revolt reveals an underpinning sense of hope and a positive future for us as we go through the storm that is upon us. I see so many diverse people, each bringing a unique thread to this “tapestry”; Revolution Q is a bright gold thread.”

Wonderful review. Thank you so much to the kind soul who wrote it! If you want to pick up a physical copy, you can do so on on Amazon, or, if you prefer, an ebook version at all major ebook bookstores.