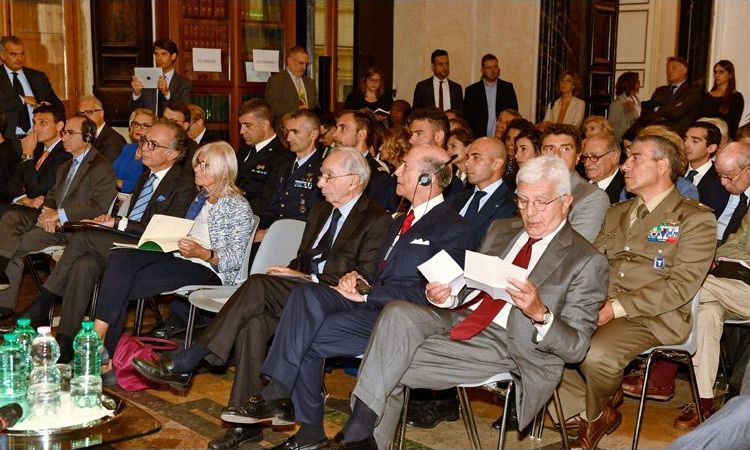 My long-time readers will recall that back in May, I published my first article on the case presented by Giulio Occhionero, and how a web of espionage unfolded before our eyes, showing how rogue elements in the Italian government had hacked into American servers in an attempt to plant Hillary’s emails there, and use that against President Trump in order to frame him as part of a larger #Spygate scandal: 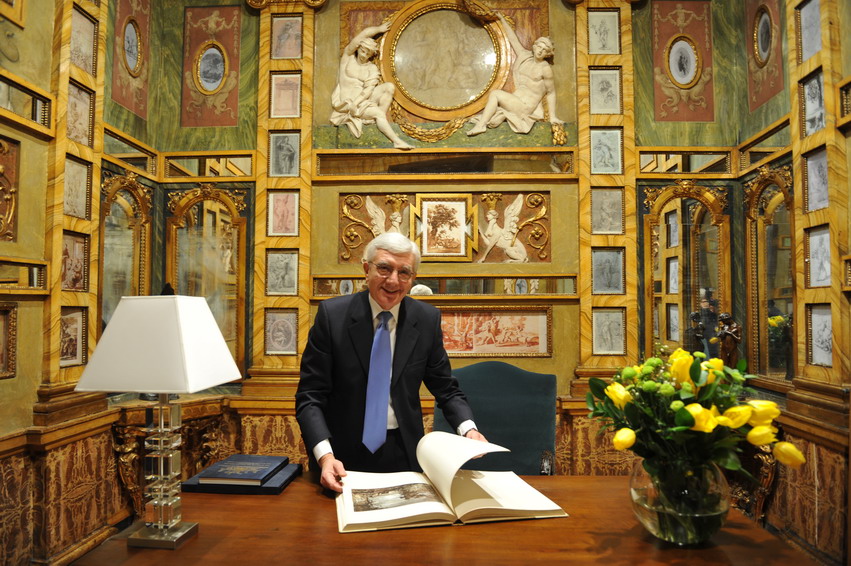 Before I begin, a hat tip to TheBigOldDog, Zatvornik, and Anglojibwe. Also, I’ll address recent “drama” at the END of this article. For now, I want to get right into this: It star…

I was told that after I had published my article, panic ensued among the international Deep State, with the article above evidently travelling all the way to the Italian PM’s desk, at the time.

The media then went into “damage control” mode, because, due to the nature of the subsequent revelations this line of inquiry would produce, this was a particular thread they did not want anyone pulling on.

So of course, I had to pull on it again: 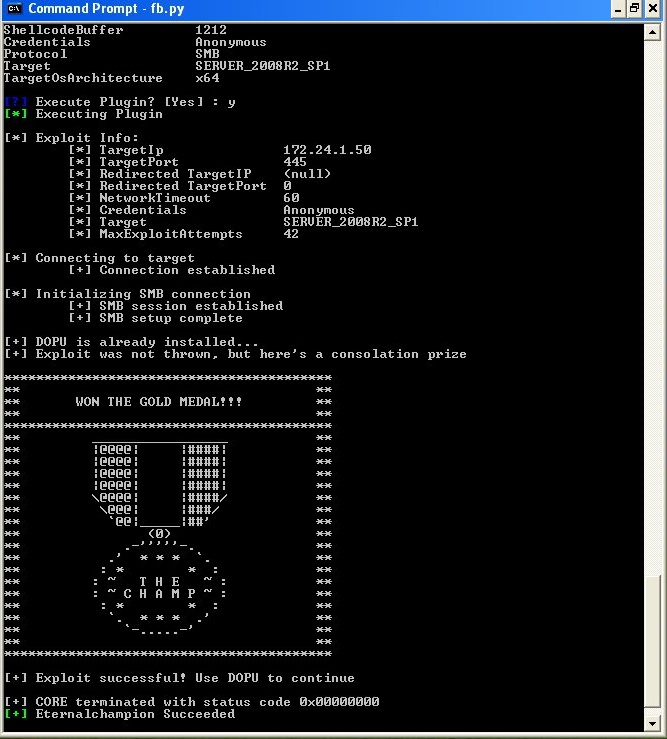 Both those articles are essential to what comes next, so if you haven’t taken the time to track these yet, please do.

I don’t think it’s an understatement to say that Giulio Occhionero and his family have been thrust into the spotlight as a result of this, and have largely been embraced by the Patriot/QAnon community, where their unique contributions and perspective have proven valuable.

And of course, Joe Hoft over at the Gateway Pundit has been tracking the story for some time, and Occhionero’s work was even highlighted by Dan Bongino the other day. Needless to say, this story, and the subsequent corruption it implies, is huge!

If you read the above articles, you will remember the great lengths to which Occhionero went in order to fight back against the frame-job by the Italian Deep State. Well, surprise surprise, nothing has changed on that front, and since being freed from his wrongful imprisonment, Occhionero’s efforts have only intensified. Since moving to the UAE, where Occhionero working as a quant, his lawyer back in Rome has been pursuing all manner of strategies to bring this story to light.

And this brings us to the other day, when Occhionero wrote to both myself and Redpill78, to update us on his current situation:

I wanted to let you know what happened two days ago with US Embassy Rome, the cove of anti-Trump US overseas officers. My lawyer Parretta went to the Embassy deposit the attached criminal complaint.
After making him waiting outside the entrance, one of the officers took the complaint from him and brought it into some office. After some time, while Parretta was still waiting outside, this guy came back and said the Embassy would not accept such deposit.
Embarrassed and upset, Parretta asked how could it be possible that the Embassy would not accept a complaint signed by an American citizen (Francesca Occhionero) which details serious crimes against US cyber space. They just shrugged shoulders and didn’t provide any answers.

You’ll recall from the original case that both Occhionero and his sister were targeted in the EyePyramid investigation – precisely because Occhionero has more right-leaning sensibilities, as well as for his technical capabilities – and because his sister Francesca has dual citizenship with both the USA and Italy. Planting the emails on Occhionero’s server, and then tying the Occhionero’s to Trump (with plenty of lies and media help) should have been easy. But, through a series of errors which, as far as I can tell, can only be explained by serial incompetence, the Italian Deep State failed in this effort.

But for the US Embassy to simply REFUSE to accept the complaint of a US citizen – especially one so close to the current Spygate scandal we’re all enduring – well, that’s just unheard of.

If those at the Embassy wanted to cover their tracks, they would have been smarter to simply take it and throw it away without Occhionero’s knowledge. But for whatever reason – I suspect they weren’t quite prepared to respond to something like this – they didn’t.

They simply returned the complaint to the lawyer, effectively stonewalling him.

Startled by this turn of events, Occhionero did some digging.

Turns out that someone with a vested interest in not being connected to this whole Spygate / Silent Ones scandal had been present at the embassy just mere days prior:

See that picture? Here’s a screenshot of it on the Italian Embassy’s site, for posterity: 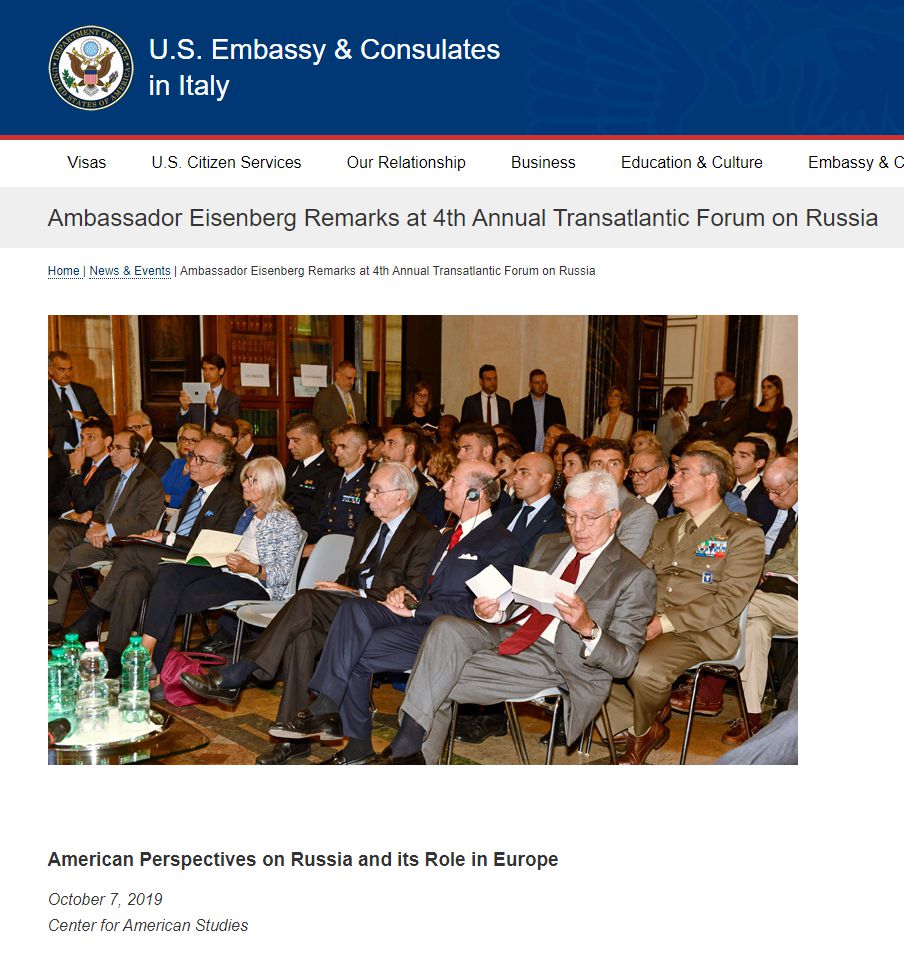 That’s Ambassador Eisenberg sitting right next to Gianni de Gennaro for this conference. (And I imagine they knew this picture was being taken – showing the world that they’ve met in some capacity together).

My readers will recall from the first article in this series that Gennaro is the former Chief of Polizia di Stato, was then the Head of Dipartimento Informazioni e Sicurezza (the Italian DNI) and is currently the Chairman of Italian weapons conglomerate Leonardo/Finmeccanica. He is also Chair at Centro Studi Americani, and was also awarded the FBI’s Medal of Meritorious Achievement by then director of the FBI – Robert Mueller: 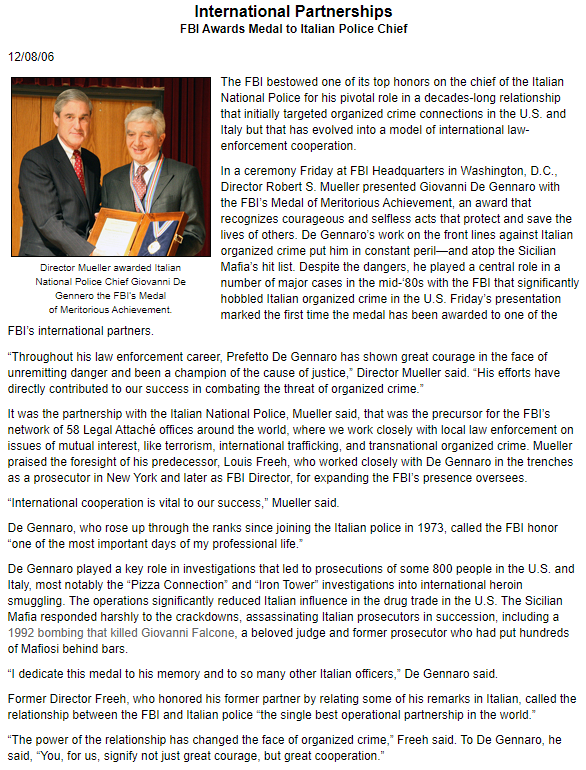 He’s basically the Italian version of Mueller, and oh… he’s also the top candidate for being Comey’s “Confidential Human source.”

Recall that the entire Crossfire Hurricane investigation was started because this CHS was telling Comey where he was supposed to find all this dirt on Trump. But when Comey was fired, and the FBI subsequently found nothing on Occhionero’s servers, Rosenstein pulled McCabe off the investigation and switched gears towards starting the Robert Mueller Special Counsel.

So yeah, Gianni Gennaro, being the pezzo di merda that he is, is turning up again, seemingly stifling Occhionero’s efforts at THE AMERICAN EMBASSY.

It seems, the US Embassy in Rome is willing to prevent the surfacing of these crimes; as unfortunately my lawyers and I have always thought. I think someone in Via Veneto is deeply compromised with CNAIPIC, Procura di Roma and, of course, with De Gennaro.

No wonder the likes of Barr and Durham have to make surprise visits overseas.

And if Occhionero’s suspicions are correct, this likely means that the Italian Deep State has members of OUR embassy blackmailed into submission.

Occhionero, as a result of being stonewalled by the US embassy in Rome, provided both myself and Redpill78 with copies of his most recent letter to the DOJ and the FBI, both in English and the original Italian, as well as the court document referenced in his complaint.


(Here’s the Italian version and here’s the document referenced in the follow-up).

As you can see, chief among Occhionero’s concerns is that the kind of cyber-attacks he experienced while being framed by the Italian Deep State are still ongoing (and, as he mentions, a violation of the Budapest Convention). By filing this follow-up to his original complaint with the Procura di Perugia, and essentially attempting to CC in FBI and the DOJ, Occhionero gets all this on the public record and keeps the government’s feet over the proverbial fire.

By having Occhionero’s sister – a US Citizen –  sign the complaint, that should have guaranteed it went through the proper channels, all the way to the DOJ and the FBI.

But that didn’t happen.

Instead, it seems that the compromised assets within the US Embassy in Rome stonewalled the Occhioneros at the behest of the Italian Deep State – all to continue covering up the manufactured pretenses of the whole Spygate/Russian Collusion narrative.

Thankfully, Occhionero has some recourse in that he can contact both myself, Redpill78, and other like-minded individuals in the alternative media, and we can help bypass and mitigate some of that. It’s my hope that by publishing this article, and Occhionero’s documents, that they will end up in the hands of the proper authorities, and provide some insight as to what’s really going on inside the US Embassy in Rome – which seems quite overdue for a house cleaning.

I don’t know about you, but as an American citizen myself, I’m furious to hear that the US Embassy was essentially denying due process to an American citizen – and one who was targeted and framed by the Obama administration (and its foreign allies) itself – all as part of a broader scheme to frame Trump for “Russian collusion.”

If you’re someone with contacts at either the DOJ or the FBI, I would ask that you forward this article to them so that the information within can work its way up to the proper channels, because we simply cannot allow these criminals to get away with this.

Thank you for all who share this with those respective agencies. Hopefully we can get some eyes on this, and clean house at the US Embassy in Rome.

25 thoughts on “Sounding the Alarm for Occhionero – Stonewalled by the US Embassy in Rome? #Spygate #TheSilentOnes #GreatAwakening #NEONREVOLT”