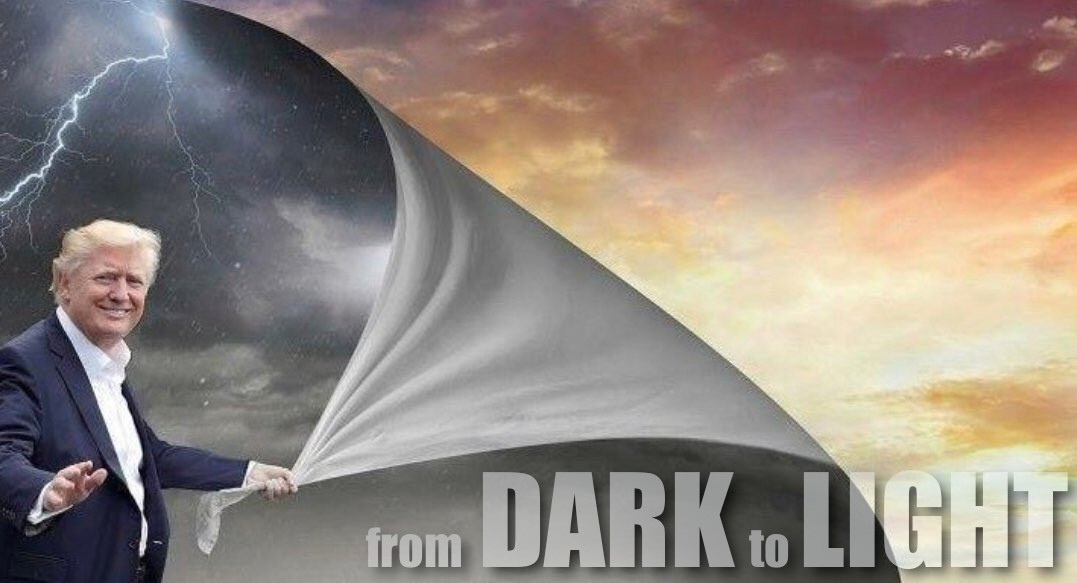 Guys, I’m really excited to be able to help break this news along with Thomas at TruReporting, and Redpill78.

I recently had the chance to talk to the #GoogleWhistleblower, Zach Vorhies, who you’ll recall recently dumped a ton of incriminating documents he had saved over the years working at Google with Project Veritas, leading to a number of stunning revelations about the way Google is manipulating the public’s access to certain kinds of information they unilaterally deem unacceptable, on top of interfering in elections world-wide. Zach was also able to submit tons of materials to the DOJ, and had, at one point, police sniper rifles trained at him from the rooftops where he lived, following Google’s attempt to paint Zach as mentally unstable. In response, Zach not only set up a dead-man’s switch was forced to go public, where the spotlight of the press would provide him some much-needed protection, and mitigate Google’s sinister escalation of the matter.

In talking to Zach, I learned a number of things, but naturally, being who I am and what I do, the conversation soon turned to the subject of #QAnon. I asked him his thoughts about the level of censorship Q is experiencing (and likely going to experience in the future), as well as his own thoughts on the movement, and that’s when he dropped a bombshell on me.

The very day that Vorhies went public with Project Veritas, he gets a text message out-of-the-blue.

It’s from a number he has never seen before, and has never had any contact with.

And it is startling:

Zach shows me this conversation, and of course all kinds of questions run through our minds. Is this legit? Is there anyway to verify this? Should we, uhhhhh, call back the number it came from?

Now, I’m not about to publish that number that it came from. I have no desire to “doxx” Q, or anyone potentially related to the operation. And besides, I advised Zach to pretty much forget the number. If this is legit, and this is actually originating from Military Intelligence, they can spoof numbers anyway. For all we know, it could be a number they selected at random. It might also be from a burner.

I also tell him I will not be calling back the number because if this is legit, I do not need spooks showing up at my doorstep. (Not that that would stop them in this particular scenario, per se).

Guys, I’m not saying this is 100% beyond-a-shadow-of-a-doubt legit… but I will say right now, I’m definitely leaning towards this being legit. And this isn’t exactly unprecedented.

I realize Q has said “no outside comms” in the past, but this kind of thing, you’ll recall, has happened before, and Q has told it it has happened him/herself: 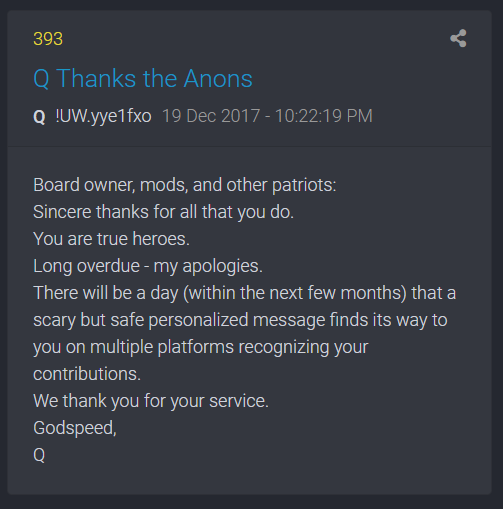 There will be a day (within the next few months) that a scary but safe personalized message finds its way to you on multiple platforms recognizing your contributions.

And then, after this post, Frederick “Based Hotwheels” Brennan (who shall heretofore be known as “Betrayer Hotwheels,” given his recent media appearances) posted this:

So yeah, I’m leaning towards the text Vorhies received as being one of those rare, legit occurrences – especially considering his incredible contributions to the movement, and especially considering 8chan was down at the time Vorhies would have received this message, so Q didn’t have his normal channels through which he could communicate.

Vorhies was very hesitant to let me share this at first, and I understand why. He didn’t want this to be used against him in any way by his enemies, especially if it was some kind of trap; say, for instance, by someone related to Google, trying to trick him in some way. I told him I thought it was fine to share the content of the message, as he’s not doxxing anyone, and literally just conveying something he personally experienced. And that’s when he agreed to let me post this.

If the boards were up, I’m sure we could all talk about this there.

But seeing as they’re not right now, well…

We’re going to have to wait a bit to see if Q will either confirm or deny. If it is actually Q, this will be very cool, indeed. If this is a bad operator imitating Q, it’s better we all know and understand their tactics.

Vorhies will be on TruReporting later tonight, and Redpill78 will be covering this as well, this evening. I’ll update this post with links to both here, so you can hear more straight from Vorhies.

As promised, here’s the two videos:

With all that said, we are rapidly approaching the time when Jim Watkins, owner of 8ch, will be testifying before the democrat-run clown circus known as the House Homeland Security Committee, where he will be forced to endure a grilling from the likes of Sheila Jackson-Lee, who is perhaps best known in the Qcommunity for wearing a pedophile symbol ring in Congress, and who Q said was “Part of the club.” 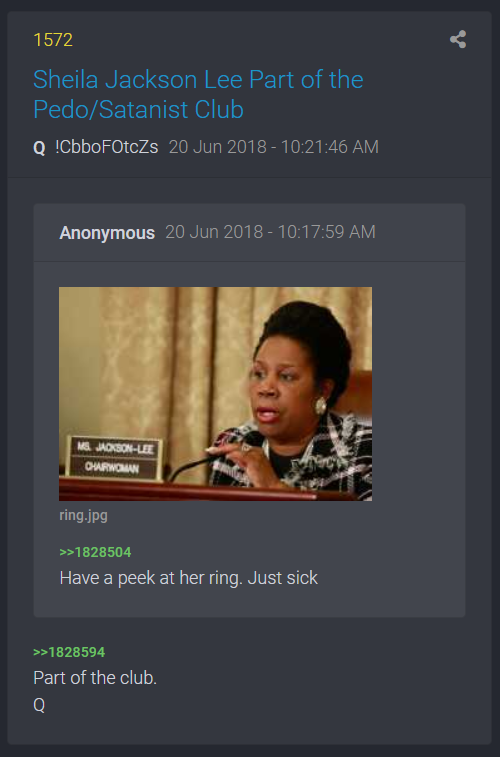 Make no mistake, folks. The only real reason they want 8chan offline is to protect their power. Collectively, we are a threat to their hegemony.

Watkins did something very smart when he took the site offline prior to this hearing. As I’ve stated before, the site has had the ability to come back online for some time now. It’s not a question of capability. Watkins was, smartly, looking to deprive the Deep State of any more false-flag ammo. Because you just know the Deep State would just loooove to get some other shooter posting some other manifesto on 8ch prior to this hearing. Clearly, the better course of action was to keep the site offline for the time being.

Pray for supernatural wisdom for Jim Watkins. He’s going to need every ounce of it he can muster. We’ve got a handful of good guys on the committee, but this is like going into the lion’s den. You can bet I’ll be up and watching every moment of the hearing on C-SPAN. I’m sure there will be more than a few surprises in store.

Okay, shorter article here today, but I hope it offers some reassurance that Q is still out there, still watching, and still active.

I wanted to take some time at the end of this article to talk about a member of the community who was recently in a very bad car wreck, totaling his new truck.

Sean Cordicon has been in the ranks of the QArmy for quite some time, and for many, he needs no introduction. He has been “Q’ed” himself (in drop 3469), speaks to General Flynn, and now, he could really use some help following his devastating accident, in which he broke many ribs, part of his back, collapses a lung, shattered his spleen, and required 8 quarts of blood during a life-saving transfusion. 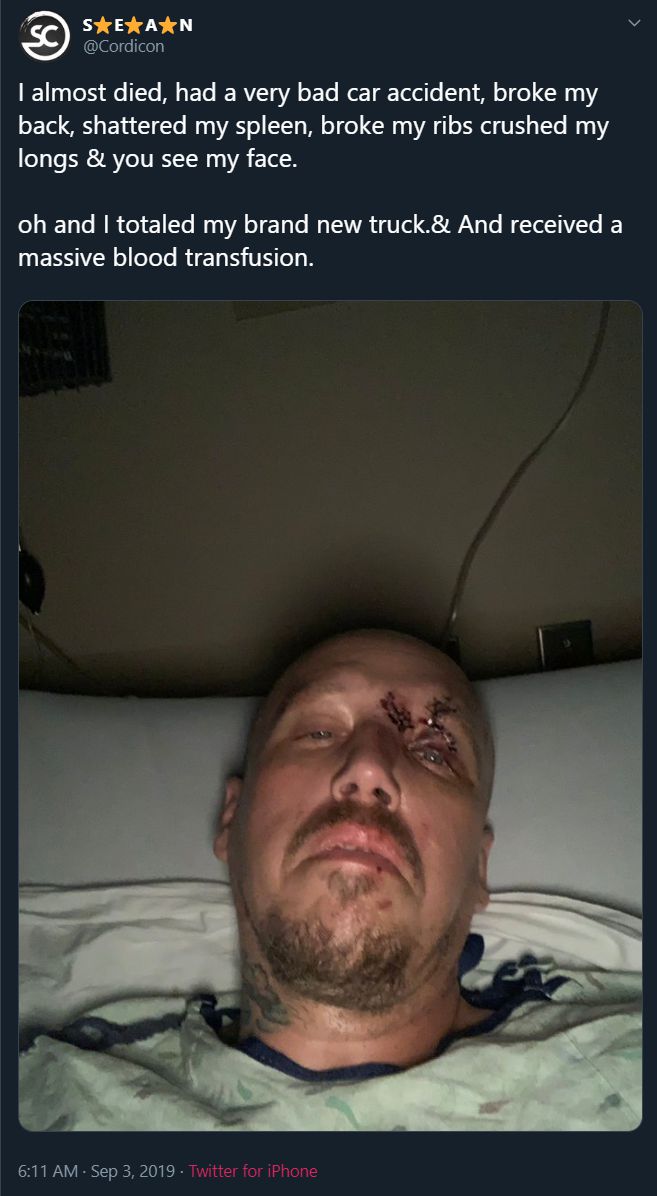 Judging by his twitter feed, Cordicon is in relatively good spirits, but this is no easy thing.

If you feel so led, you can donate to Cordicon via Paypal, and help him on his road to recovery:

44 thoughts on “The Google Whistleblower’s Message from #QAnon. #GreatAwakening”