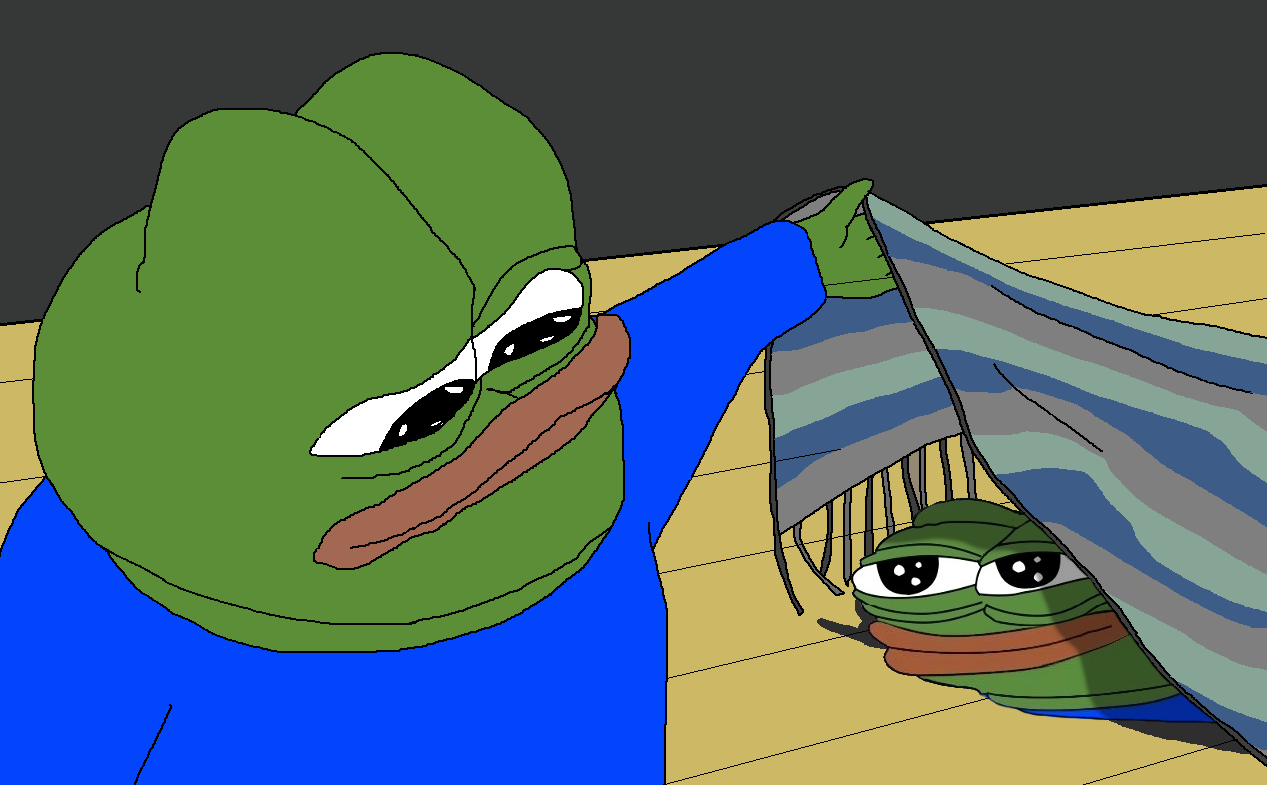 What follows are a set of posts from the past few days that seem to be from what I’ll term “Clandestine” Q posts.

What do I mean by that?

#QAnon doesn’t always post with his Tripcode. You may recall back around March 2019, when there were a bunch of “sec_tests” which were linked to Q’s device ID, but which lacked Q’s tripcode.

If I recall correctly, Q previously told us that this was important for future proofs (though I’m having trouble locating the specific drop where this was said). However, 8ch bakers all agreed to not list the posts when they tracked Q’s posts:

In other words, there’s a slew of QAnon posts floating out there on the boards, which don’t have his Tripcode in place, and we don’t entirely know what they are right now.

That said, sometimes we get a good idea. Device IDs are definitive proof (because no one can post from the same device as Q), and sometimes, the content of particular drops is compelling enough to make Anons wonder if this was really Q posting, minus a tripcode.

We have several instances from the past few days of potential “Clandestine Q” posts, and I wanted to track them here on my site, so that the wider-Q-community was aware. If you follow me on Gab, you’ve already seen this, but yeah, wanted to make sure everyone saw these here, today (because not everyone follows me on Gab).

One important caveat before we begin:

I’m NOT saying this is Q beyond a shadow of a doubt. For all we know, this may just be a really impressive LARP. But at the same time, there is a possibility this isn’t. So, I have to cover this with the caveat/warning/disclaiming that this is for informational purposes only.

So, starting from 4 days ago, on the 29th, we get this pic from the DMZ between North Korea and South Korea: 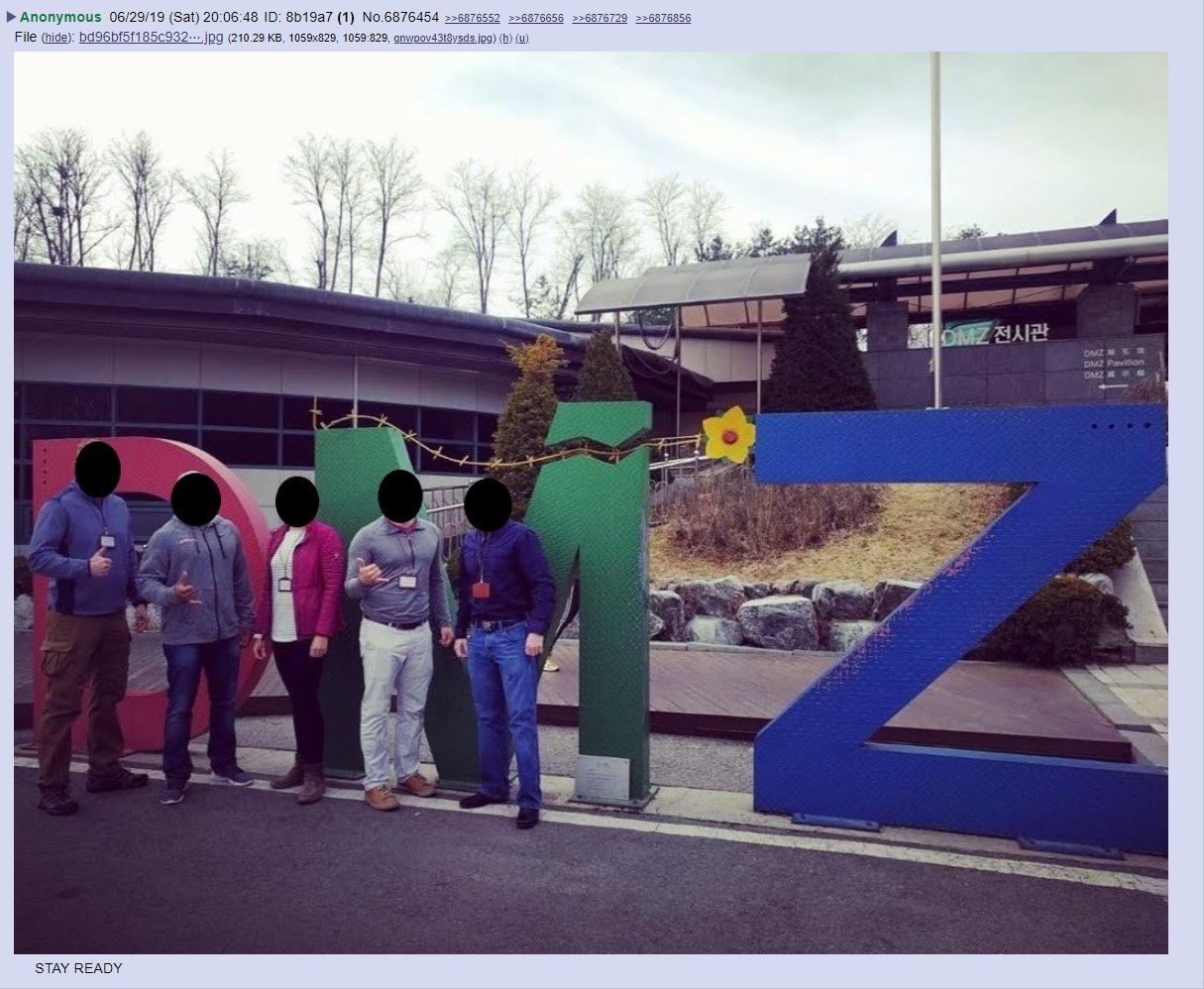 Anons did a reverse image search on the image, and nothing came up at the time.

Later Anons noticed that the season was “wrong” in this photo… And true, this isn’t a “current” photo, but I don’t think that particularly matters. What matters is what’s being communicated with this photo and the fact that it didn’t appear anywhere online until the 29th of June.

So what is this photo communicating?

Read on, for the next day, we get four drops, starting with this: 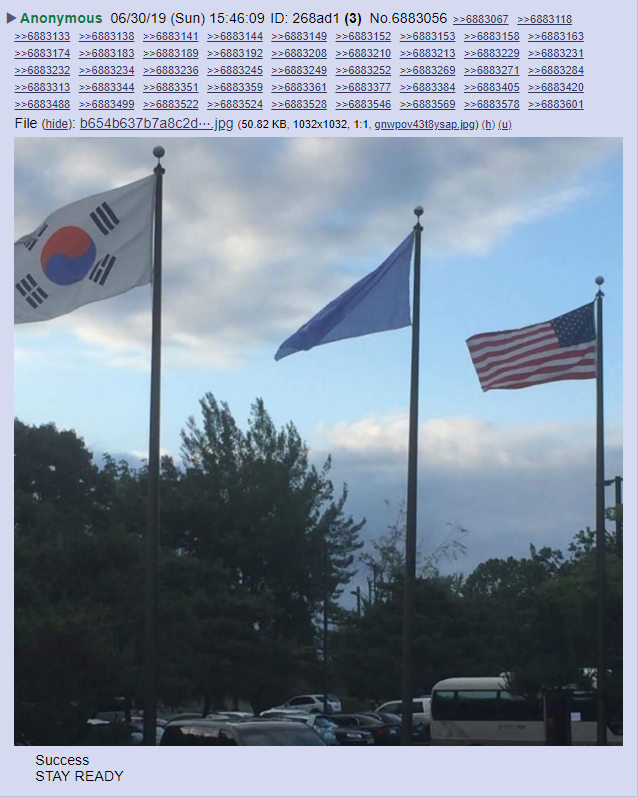 This was right after Trump’s historic meeting with Kim Jong-Un, where he stepped into North Korea while all the cameras were rolling.  I’m sure everyone is well aware of this event by now: 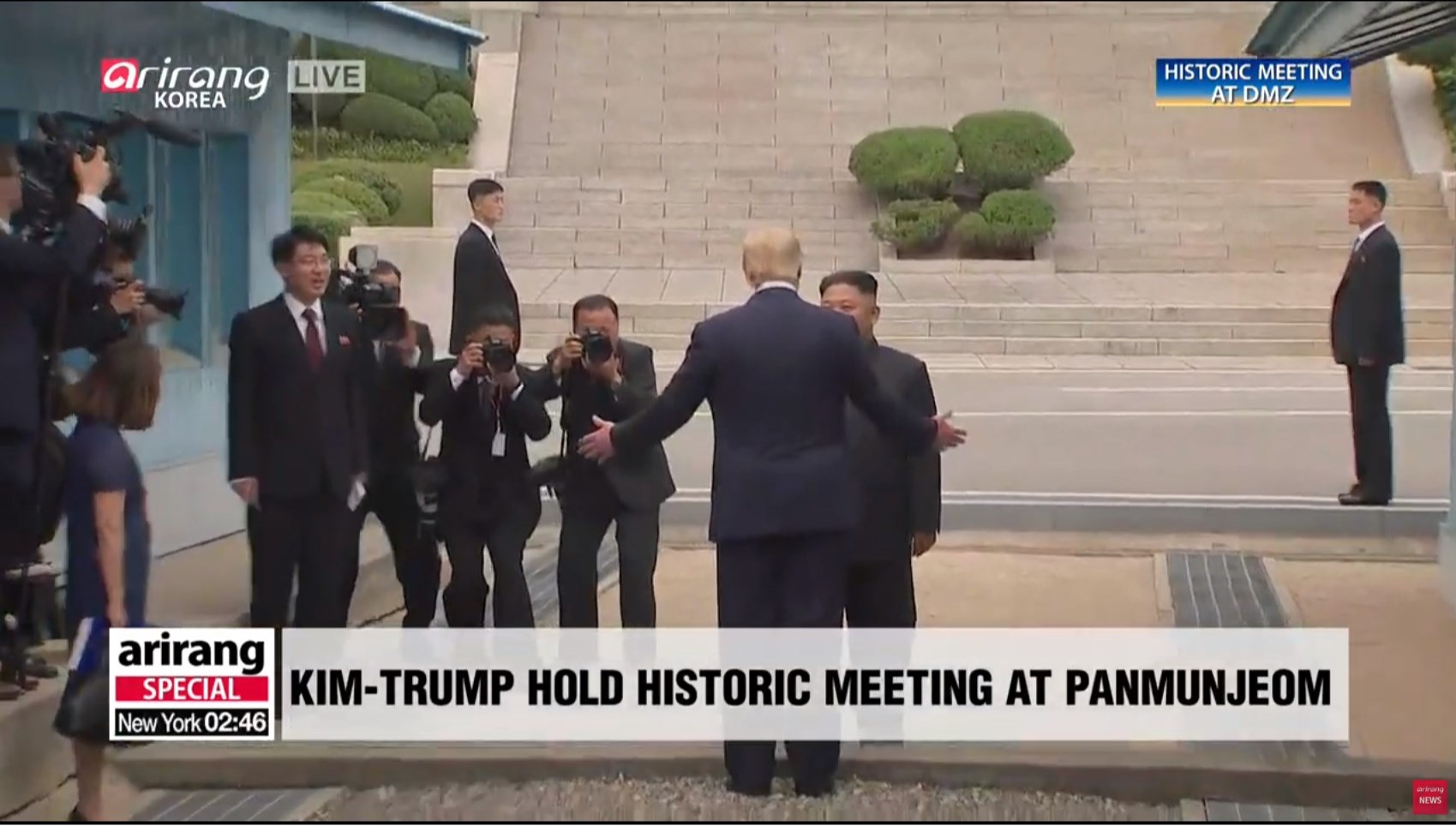 The poster, our potential “Clandestine-Q” then referred back to the DMZ post from yesterday, with a bit of message clarification: 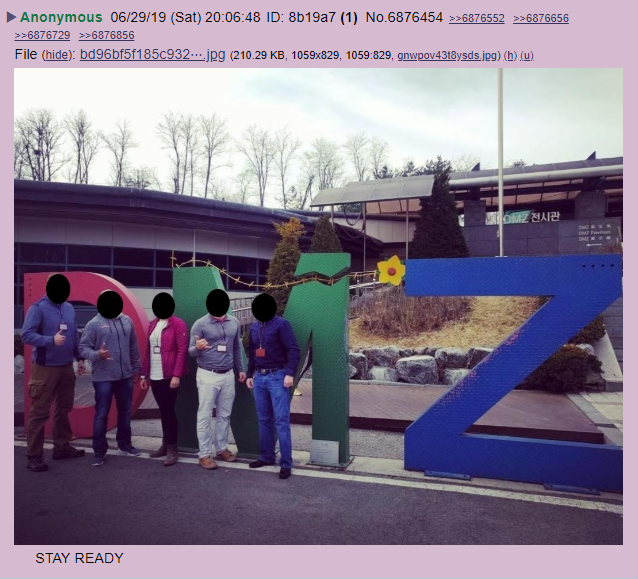 Some people at the time mistook the hand gesture for Baphomet horns, but yeah, it’s actually the relatively benign “surfs-up” gesture.

“Clandestine-Q” then posts the image again, with some additional commentary: 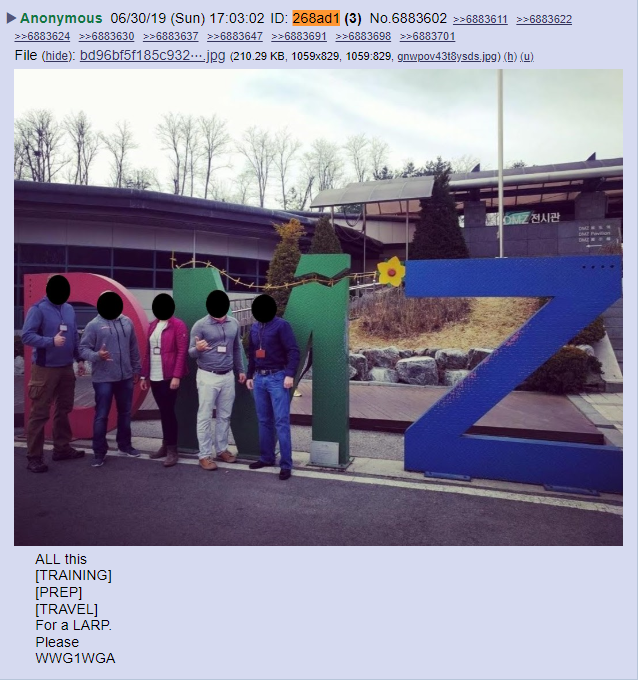 And that was the end of the posts on Day 2.

Day 3 we get two more posts, starting with a familiar “sec_test.” 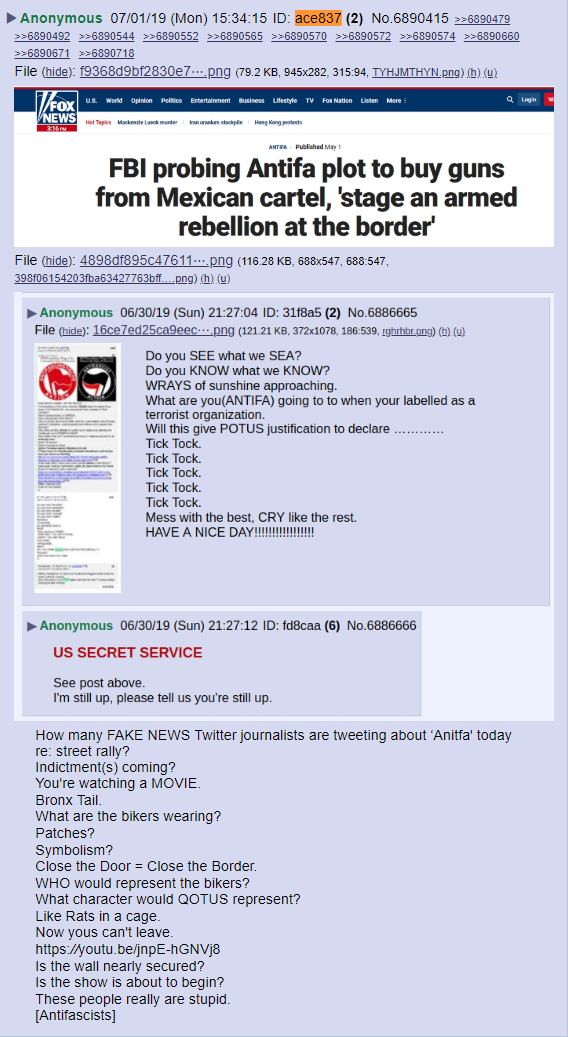 Now obviously, this post is in relation to the violence and domestic terrorism we all witnessed in Portland just a few days ago. Many were attacked, notably Journalist Andy Ngo, who suffered a brain bleed after being attacked by an Antifa mob, where he was beaten, had his equipment stolen, and had a “cement milkshake” thrown on his head. 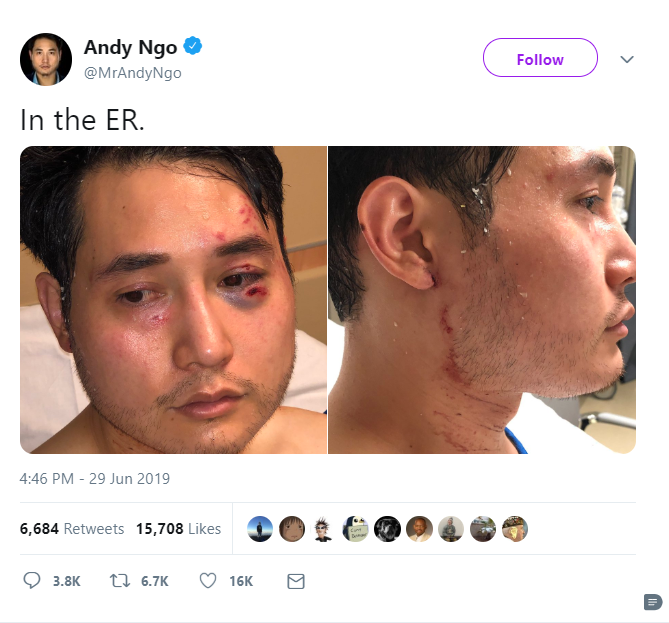 And Portland is a real nightmare hotbed for this kind of Antifa activity, because not only are some cops literal Antifa (sporting their stickers on the bumpers of their police vehicles), but the Mayor told the Chief of Police to have her forces stand down, which she did.

The violence was so bad, that Ted Cruz started to call for the prosecution of Portland’s mayor: 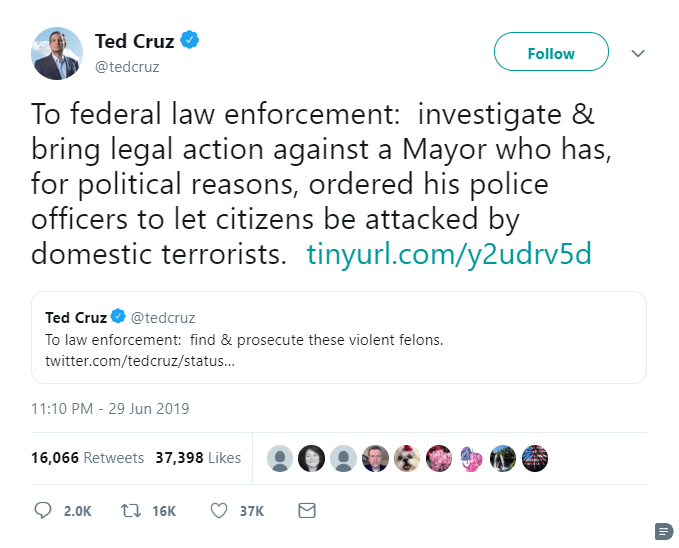 Thankfully, Anons have begun to identify the attackers and submit their information to the proper authorities, so hopefully, we’ll see some justice on this front, soon.

However, in regards to the “Clandestine Q” drop, a number of “misspellings” were concerning to Anons, notably a “Bronx Tail” (should be Tale), and the double “is” in the line:

“Is the show is about to begin?”

Others pointed out the “yous” in:

Not realizing it was a line from the scene “Clandestine-Q” was quoting:

Not to insult anyone by spelling it out, but “Clandestine Q” is using this clip to illustrate how Trump is shutting down the border-related machinations of Antifa (with Antifa being the Bikers, and “Trump” being played by Chazz Palminteri, the gangster who locks the door/”secures the border.”

Note, also, the “Iron Cross” on the Biker’s jackets. That’s the patch symbolism “Clandestine Q” is talking about here, and which I’m sure you’ll recognize by now from other, past Q-drops.

In my humble opinion, given Q’s penchant from quoting movies from this era, this seems to be a fit for Q, and the misspellings don’t bother me so much (especially given the penchant of mobile devices to “autocorrect” every little thing).

So now, the million-dollar-question: Are these posts actually from Q?

Whether you believe they are, or they aren’t, I wanted to bring them to your attention because they were very easy to miss, regardless. Not everyone lurks on the boards all day. Many in the Q-community rely on aggregators like Qmap.pub, or QAnon.pub in order to pull the Qdrops down to them. Others use similar apps on mobile devices. So these folks don’t touch the boards at all, and would have never seen these posts otherwise.

At any rate, I think these “drops” paint an interesting and compelling picture, and I wanted you to be aware of them.

Because ultimately, you never know where Q might be lurking…

That’s it for the post today, folks. A relatively short piece, but hopefully you found it worthwhile.

Quick update on #RevolutionQ. We’re still in the typesetting phase as we await the passing of certain milestones, behind-the-scenes. After this is done, perhaps in a week or two (that’s speculation on my part), we start printing. There really isn’t anything holding us back now. It’ll be full-steam ahead before you know it!

And with regards to people who missed the chance to pre-order on Indiegogo – yes, the book will be available through retail channels soon. We’ll be opening up for pre-orders through traditional retailers shortly. But don’t worry, Indiegogo backers – the plan is to get you your books before anyone else!

As for the Mega-backers – a huge thanks goes out to them. I’ll be in contact with you shortly, and we’ll get you down on a schedule in short order so I can fulfill your other reward tiers.

58 thoughts on “Clandestine #QAnon Lurking on the Boards? #GreatAwakening #NEONREVOLT”