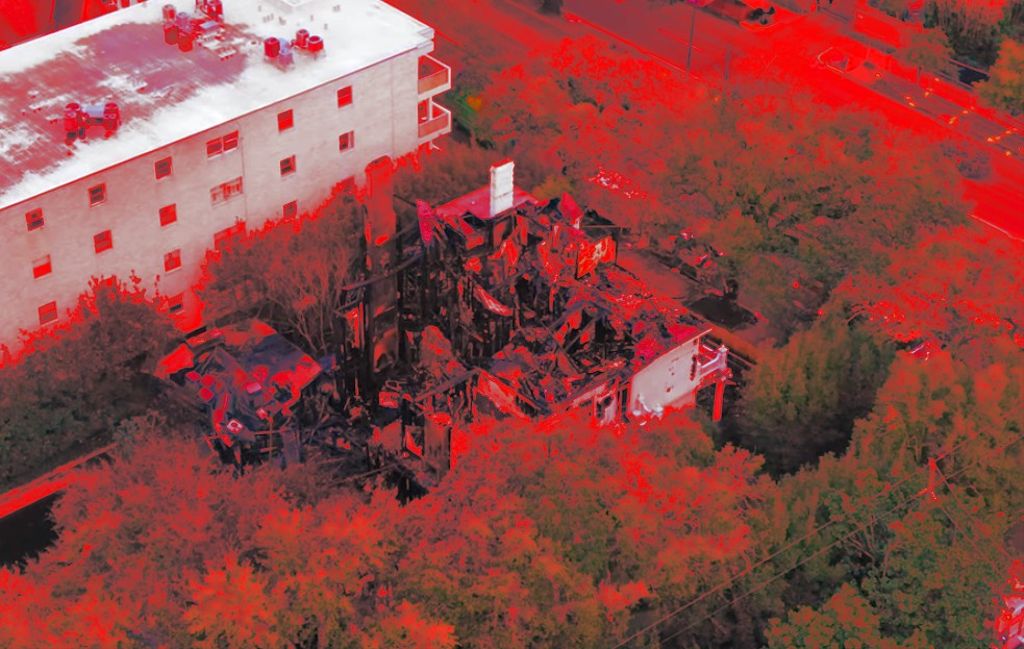 So, my longtime readers will know that I’m a huge fan of #CDAN and the rare “conspiratorial” drops he releases, pulling back the curtain just that much more on the global elites. Whether its his series on “The Church,” his exposes on The Geffen family, or his posts about the serial abusers lurking in plain daylight in Hollywood… CDAN is always a fascinating and important read, which is why I’ve shared so much of his content over the years.

And for those just joining us, CDAN is an abbreviation for CrazyDaysAndNights.net, and technically… it’s a gossip site run by a high-level entertainment lawyer in Hollywood. Thus, he utilizes the “Blind Item” format, where basically all the names and any other other directly identifying descriptors are removed from the write-up. However, really savvy readers will almost always be able to read between the lines and figure out who/what/where he’s talking about.

(And if that’s not enough, you can always lurk in the comments to see who other people think is involved).

All that said, you can imagine my shock late last week, when I read: 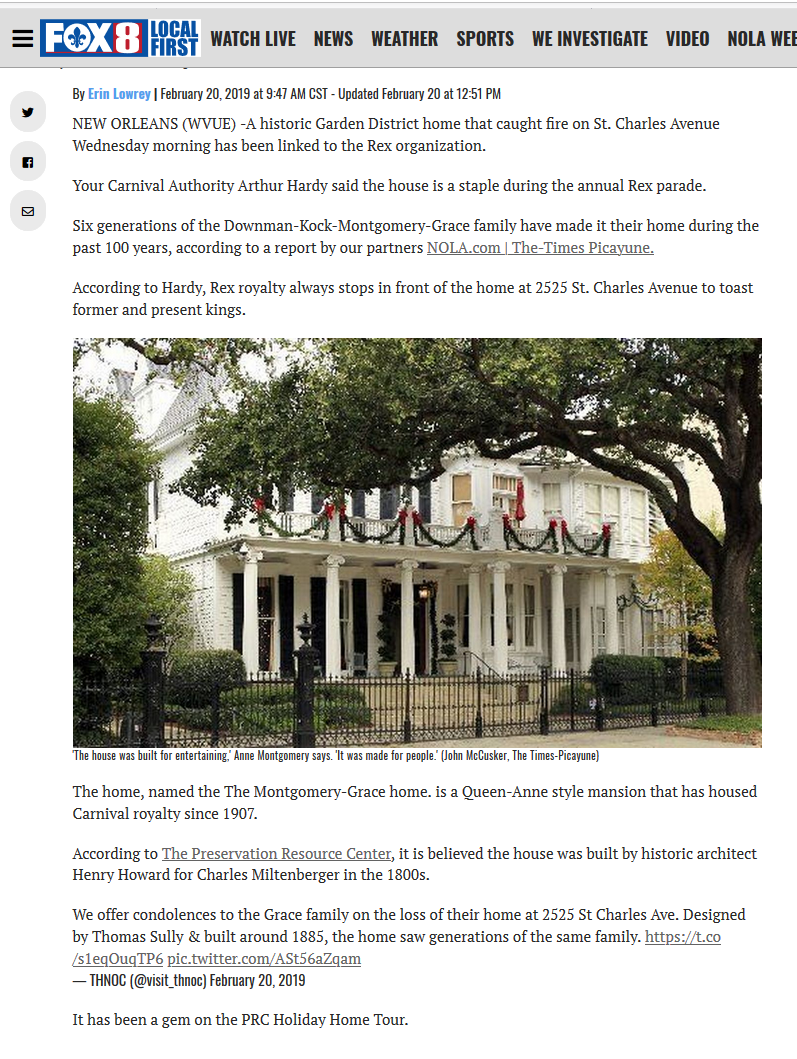 And for those of you wondering what house I’m talking about, well, catch up here with this older blind item about The House on St. Charles street: 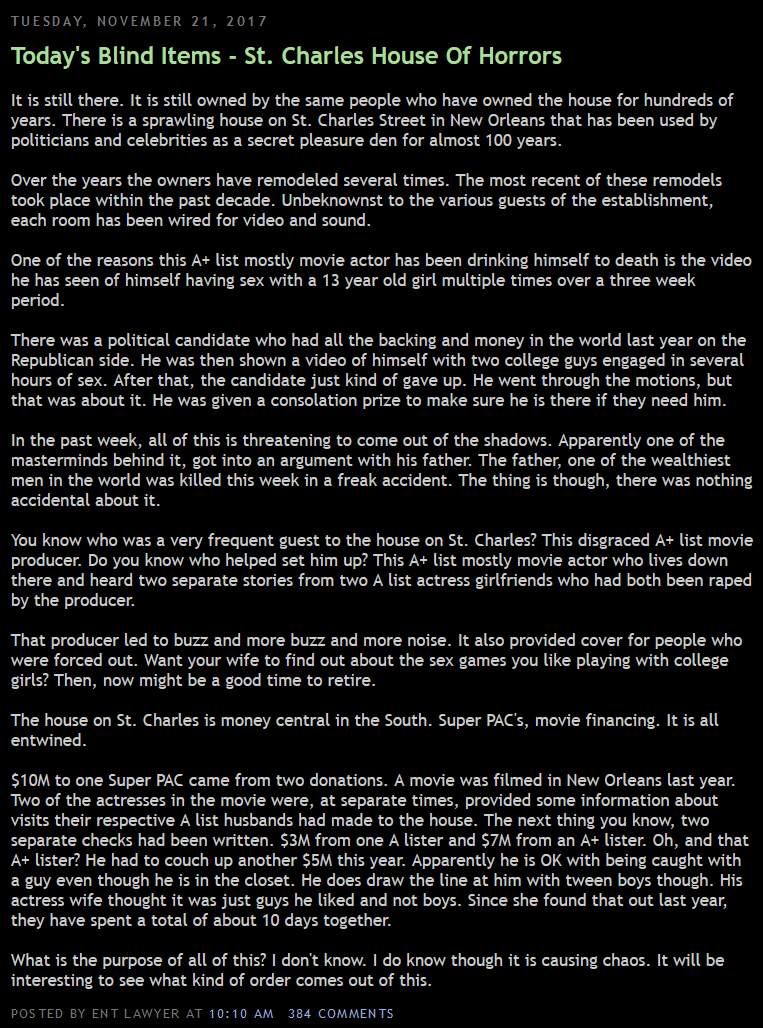 So this is a famous honeypot that’s been used for years and years, mostly to catch Celebs and other important figures in compromising film and video.

From the comments, one person suggested that:

There is disagreement about these names, however, so I don’t want to present them as “THE” correct answers. Many, for instance, suggested Jeb(!) or Rubio (more likely, in my opinion) for the politician.

And the person killed in the freak accident? Well… I think you need look no further than the collision over the Rothschild estate, where Captain Mike Green perished. You’ll recall those events from the early Qdrops.

And if that’s true, that means this Honeypot house was a Rothschild operation.

And, well, with the house burning down, I foolishly figured that was the end of that.

This video gives a good look at the extensive damage:

This all lead to some cursory digs into the REX society as a result over with the folks over on /g/GreatAwakening, and while we saw the initial connection to the annual Mardi Gras celebrations down in New Orleans, and I want to highlight #Anon’s excellent digs on this subject: 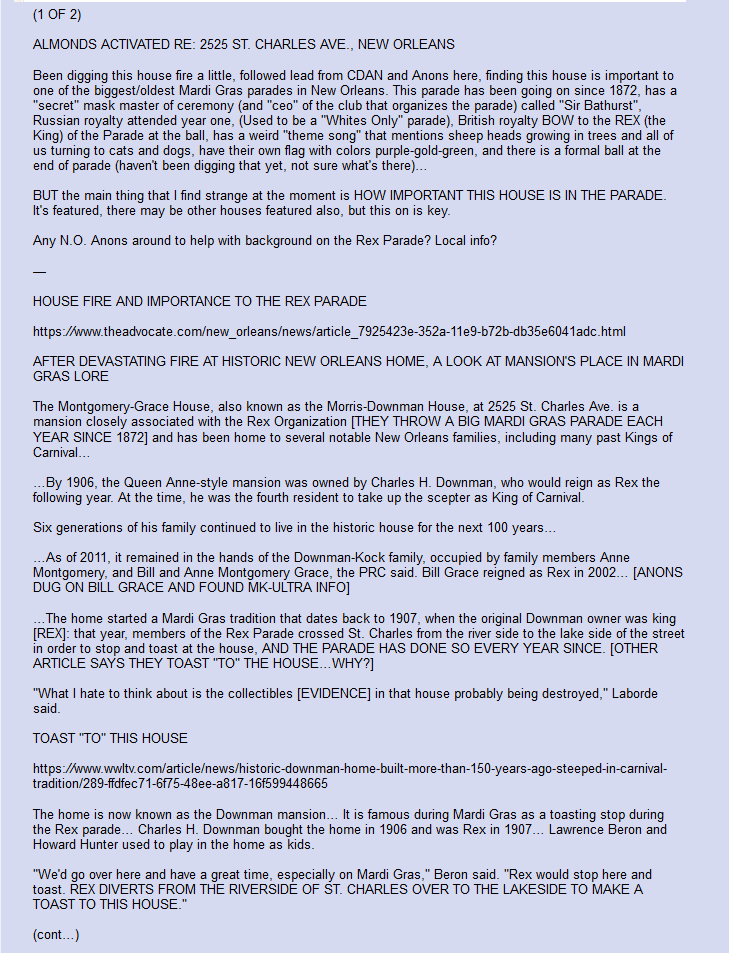 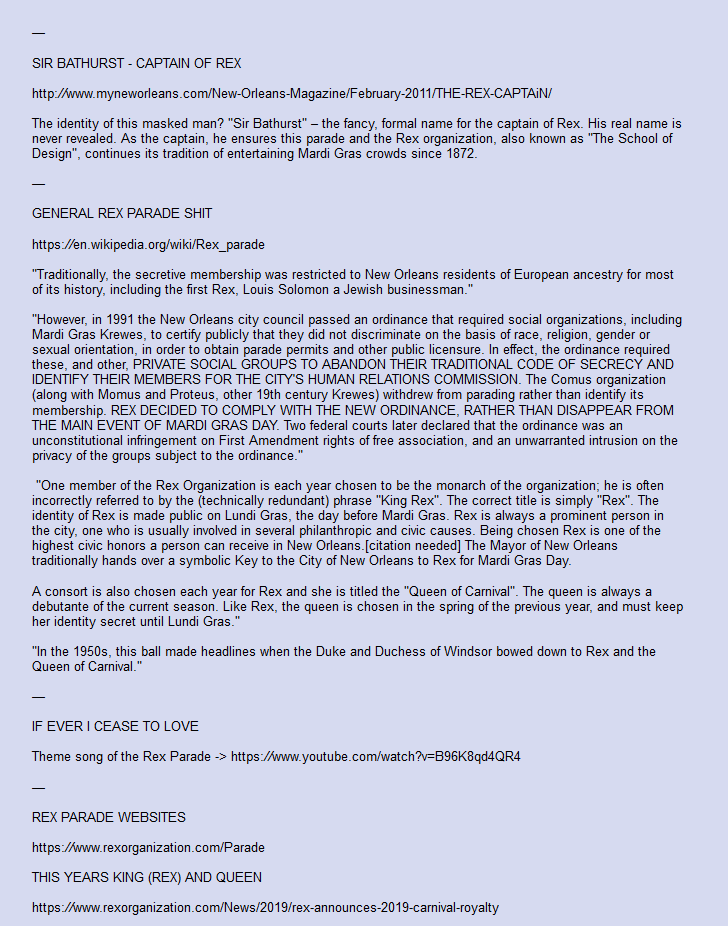 So, quite a few secret societies involved in these events, historically speaking. God that? Lots of pseudo-pagan symbols flying around, too – such as the Bull – which, I think, requires no real explanation on my part.

This has got #TheCabal written all over it, right?

So when I saw this CDAN today, I was immediately floored:

How could I have been so stupid!

Well, maybe I wasn’t. I was very busy with the book (and still am, frankly). But I was kicking myself because of course – of course! – I should have dug deeper in to this.

Anyway, following Enty’s lead here, the owner of this home is William Grace, and if you search his name, you’ll find a page, just like Enty says: 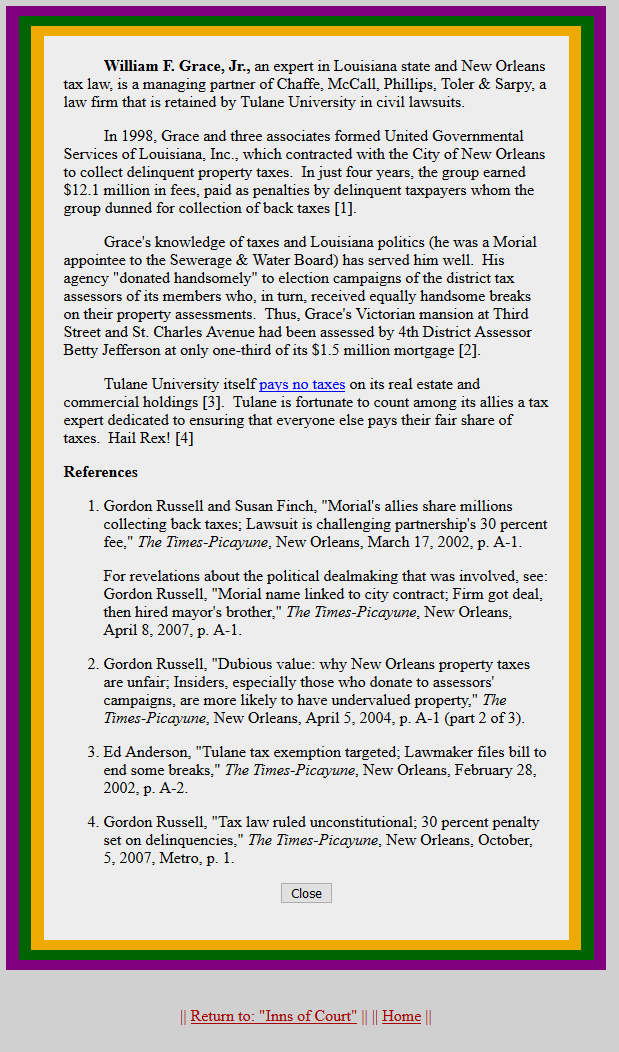 As per Enty’s instructions, we click “Home” on the bottom left. That brings us to a page that looks like this. Remember, this is not an official Tulane page.

This is something… else: 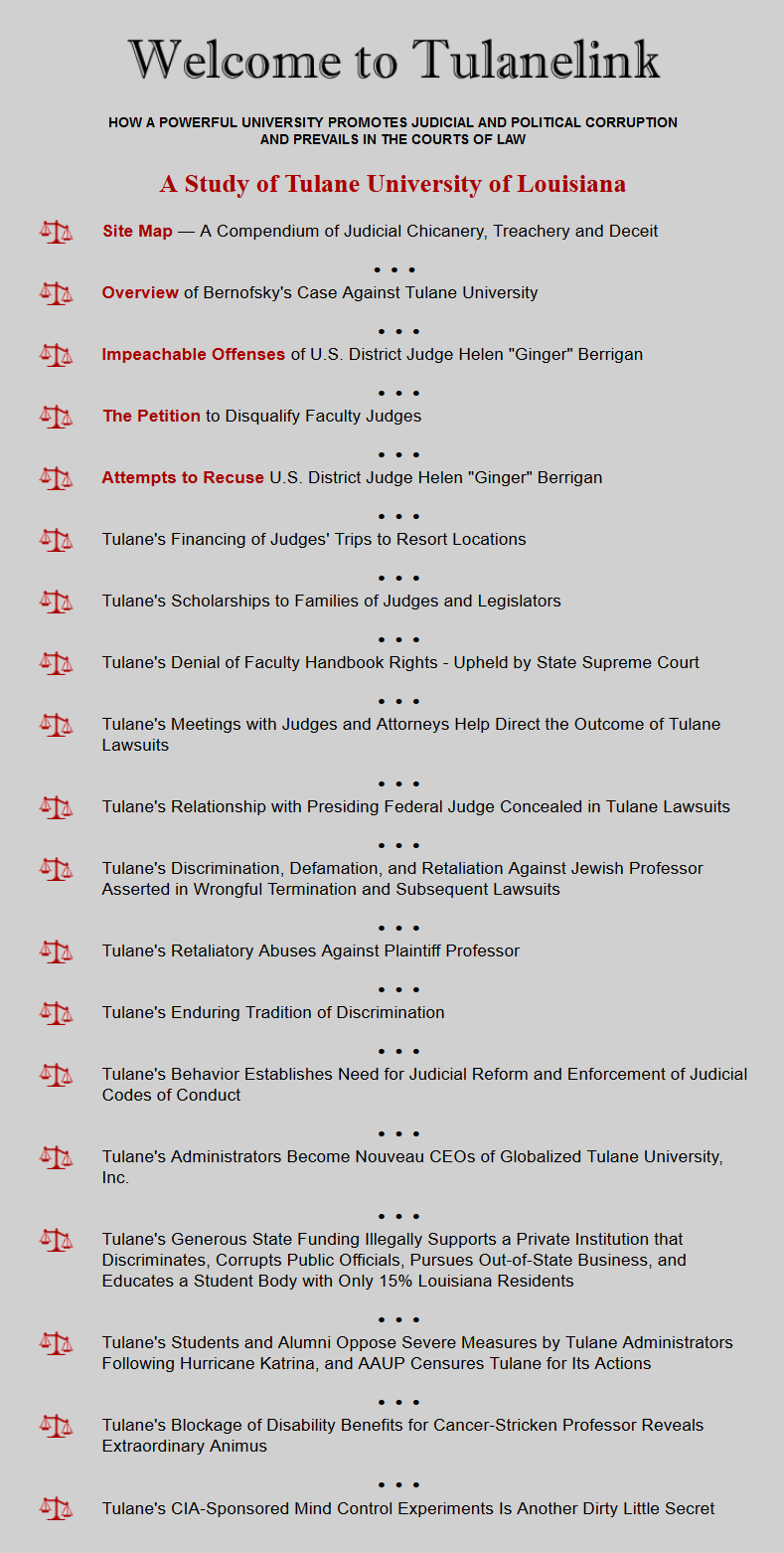 And I’m sure you’ve already seen it by now, but Enty directs our attention to the link at the bottom of this page, entitled:

Clicking on it, we find a massive interview given by a therapist and two previous subjects of CIA mind control experimentation… 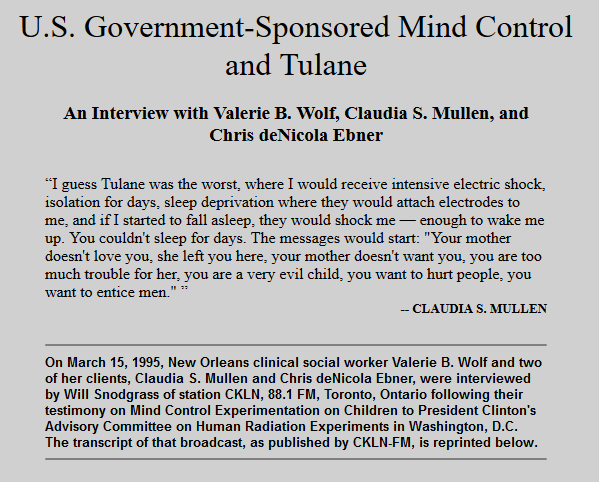 The link is, frankly, too large to replicate here, so if you want to read the whole thing, go to the archive page:

Do both of you now remember going into laboratories or clinics or being involved in immersion therapies, or dark rooms, those kinds of things?

I remember being in a laboratory in 1966. I was four years old, and I was strapped down on a table, on my back. I was naked, I had electrodes all over my body … my head, temples, chest, stomach, back, legs. Dr. Greene was there, and there were other children in the room as well. It was a laboratory at Tennessee University. I remember he had what looked like an overhead projector, it had a red flashing light. He was saying that he was going burn images in my brain, and I would do whatever he told me to do, and how the images would go deeper and deeper into my brain. Just consistently repeating the information along with electric shock, and he would use the electroshock and then the imagery and then more shock, and drugs to make me drowsy. Sometimes I would pass out … yes, I do remember that. I remember being in a dark room as well. Actually a lot of the experiments took place in a dark room out in the desert in Tucson, Arizona. Most of the experiments took place there with Dr. Greene.

People today at the Hearing asked, “Where were your parents? How could this happen? How could you be taken out from your home or the place where you lived and brought into this situation…”

My parents were divorced when I was around four years old. My Mom had no knowledge, but my father, Donald Richard Ebner, was involved in the experiments with Dr. Greene. And he would sneak me out of the house in the middle of the night. I remember feeling drugged in the house and these men coming in, and they would sneak me out of the house, and my Mom would be asleep. That’s how he gained access to me, and visits, things like that. They did most of the experiments in the middle of the night. He just found his way into the home. My Mom had no knowledge of it at the time. She divorced him because I was afraid of him, and she couldn’t figure out what was wrong. He had to be sneaky in order to get a hold of me, and that’s how he would do that. He would just … he got the key from me … and he would sneak in in the middle of the night, and drag me out, and bring me back before my Mom woke up, and that’s when most of the experiments took place. I have talked to my Mom since then, since the memories have surfaced, and she confirms that she absolutely believes that he was capable and did in fact participate in these experiments.

So Dr. Greene was operating at Tulane University and also at Kansas?

And at Tucson. Dr. Greene has been reported — he is probably the most consistent figure or doctor that’s been reported by almost everybody. He went under the names of Dr. Green, Dr. Greenbaum, Greentree, Greenberg. But always with the Green in his name. He travelled throughout the country, training people, doing consultation and also doing stuff on his own, I think, as Chris experienced.

He used disguise with me as well. I never saw him without a surgical mask, usually something on his head, and all I ever saw was a little bit of the black rimmed glasses and whatever. He was just a sadistic, evil man, and he hated me because I would not comply with what he wanted me to do.

We have memories that have surfaced here at some point in time. Did both of you, or either of you, recall these memories before you got into therapy? Were there some memories at all of what had happened to you?

Well, there would be times in my life over the years … I guess the last time I was actually involved in the projects was 1983. After that, I was supposed to be monitored by a family doctor who was a family friend who was to keep track and make sure I didn’t get any memory back. And if I was, he was to report it to them, to Dr. Greene. I had started to get somatic symptoms. I would end up in the hospital and they couldn’t find any reason for the illness. They would call in this Dr. Brown and he would notify the other doctors, and they would make sure my amnesia was reinforced.

Valerie what is the significance of these organic symptoms that presented?

Basically, what you have to understand is how trauma memories are encoded, and that is sort of a technical term for how memories are remembered. There has been a lot of controversy lately about research on memory. There has been a lot of research done on memory, and what they are finding is a lot of the information that is in the public is about normal memory. One of the things that those of us who work with traumatic memory have found is that it is very different, even as to where it is stored in the brain. Regular memories are stored in the part of the brain called the hippocampus.

That bold line remind you of anyone in particular?

This ties back to this testimony given by Valerie Wolf during the Clinton years on the President’s Council on Radiation, alongside her two patients. The video is blurry and old, yes, but the audio is clear enough.

What follows are the testimonies of Wolf’s two patients:

Astounding testimony, is it not?

I’ve only just begun to take a crack at understanding this subject, but for a much deeper dive into this particular story, I recommend reading this page:

Institute for the Study of Globalization and Covert Politics (ISGP).

But the connection #CDAN gives us here can not be missed: from the Rothschilds, to the CIA, to Hollywood, they’re all part of the same sick cult!

37 thoughts on “Digging through the Ashes of the House on St. Charles Street #CDAN #GreatAwakening”