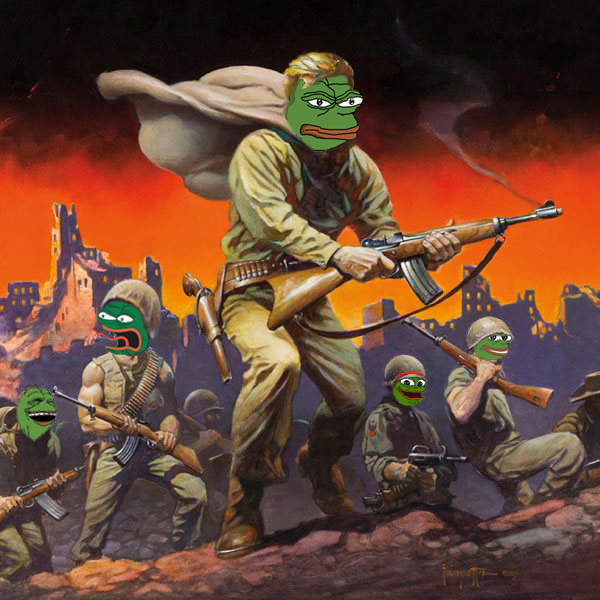 I know I said “no new articles” while I write my book, but this was quick to produce. Normally, I can fit a handful of images into shorter Gab posts, but this was too long to squash into Gab. (And let’s face it. Though there have been a slew of #NewQ posts I haven’t covered, they haven’t needed much decoding. The posts that got me most excited were his “earthquake post” and the post about the Fed – and the post that got me the most skeptical was when #QAnon “confirmed” that the baker was wearing a frog pin… when she was clearly wearing a St. Jude’s pin. Idk if Q didn’t know himself, but it reminded me of the time when he talked about the photoshopped flag as though it were real. Not good, Q!)

But we’re not here to talk about Q today (at least… not yet).

No, we were visiting by another insider, who left some interesting drops worth reviewing.

Essentially, someone calling themselves #JrSenatorAnon landed on /pol/ tonight, and started a Q and A.

/pol/lacks jumped onboard, and after reviewing everything, I would say this was a visit from a legit insider. Obviously, feel free to disagree. This comes with all the standard disclaimers and YMMV.

What follows are all the questions asked by #Anons and which were then answered by #JrSenatorAnon.

Expect all sorts of offensive language ahead, because it’s /pol/, so put on your big-boy pants and learn to mentally filter and not get offended and start whining like, well, #Crybaby Jared Holt or #SorosRentBoy Jordan Uhl. I’m more interested in JrSenatorAnon, and what he had to say. But also, realize, this isn’t going to be like QAnon, either. This isn’t someone with a high level security clearance leaking stuff. It’s someone with a very close, on-the-ground perspective answering random questions on the fly. Still interesting. Still worth noting.

But the big revelation hits home at the end, once QResearch Anons start talking about what they were just told in light of recent events.

I’ll be keeping commentary to a minimum here, only when absolutely necessary. I’ll trust most of you are familiar with the formatting as well, but JrSenatorAnon’s id is L2cGmwkr, and generally speaking, the questions and context will be embedded within his responses. You’ll see. It’s easy to follow once you get the hang of it: 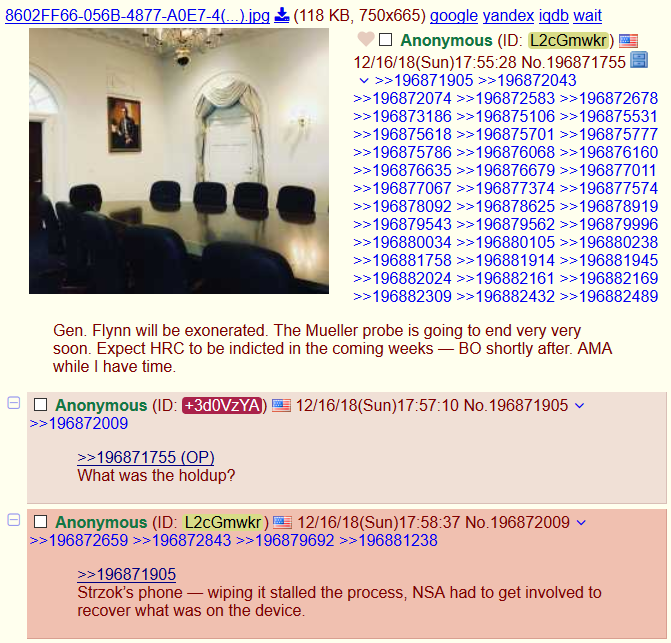 Consistent with what I’ve heard about them having to pull something from Samsung Knox – which is a security program on Samsung devices. 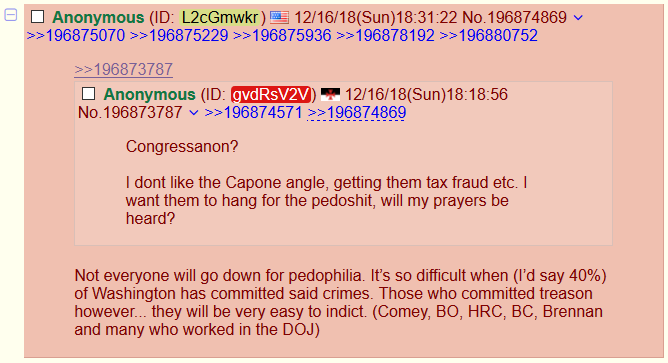 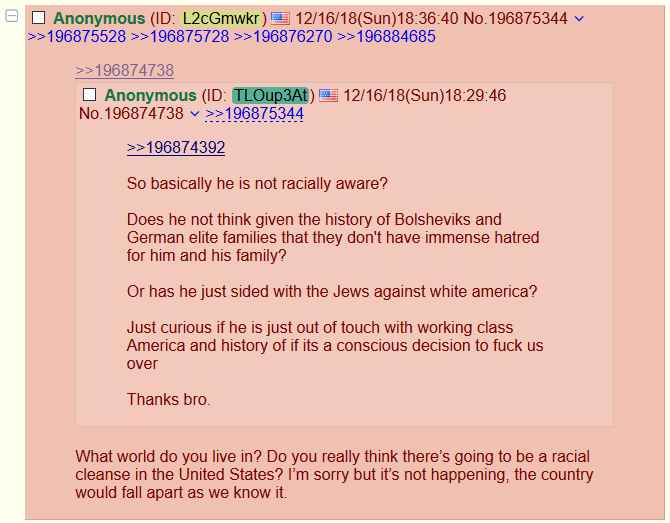 I think he’s very wrong on this front. The market looks set-up for a spectacular crash here; one which only requires a little push… perhaps from a Payseur sell-off.

Hard to say, of course, but that’s just my personal opinion. 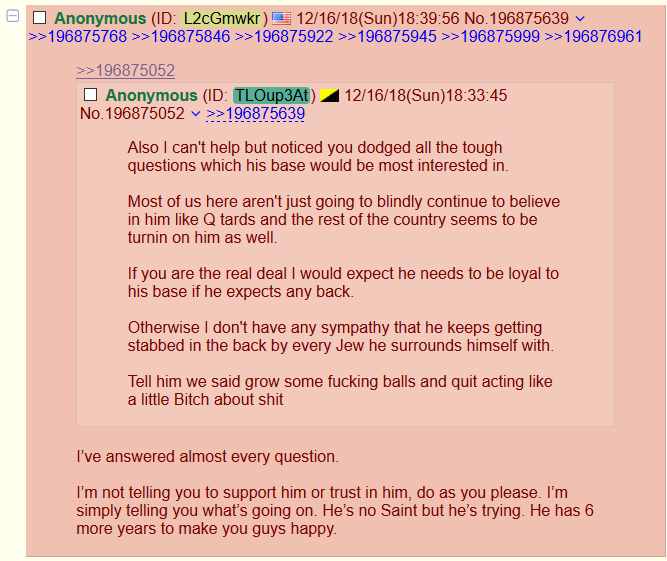 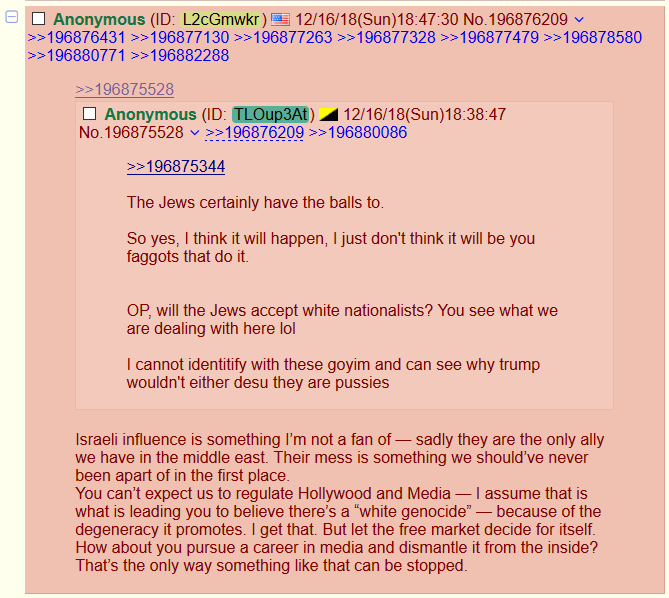 I would hope, at the very least, that we could expunge CIA and MOSSAD influence from Hollywood. And maybe ban pornography on public health grounds.

THIS^^^ was the post that attracted the most attention.

I posted these images to Gab on Friday, because, yeah, you may have heard, an entire court floor was sealed off for a mystery case: 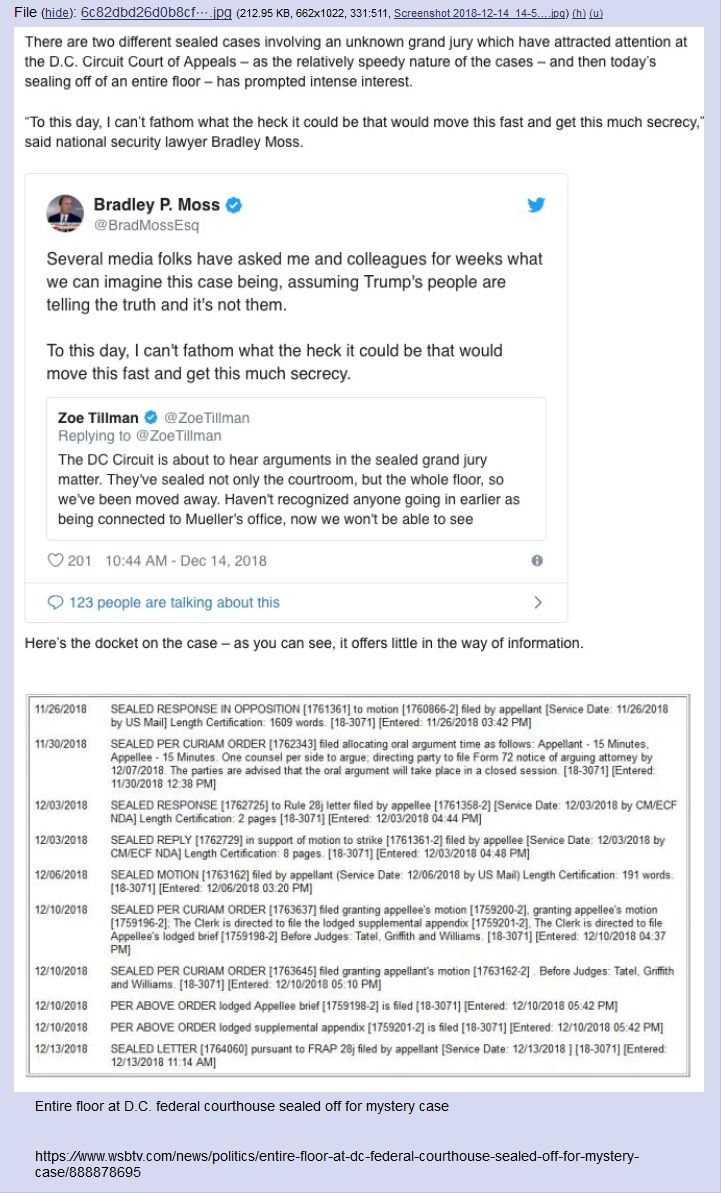 We’ll get to what Anons discovered about this at the end of the drops: 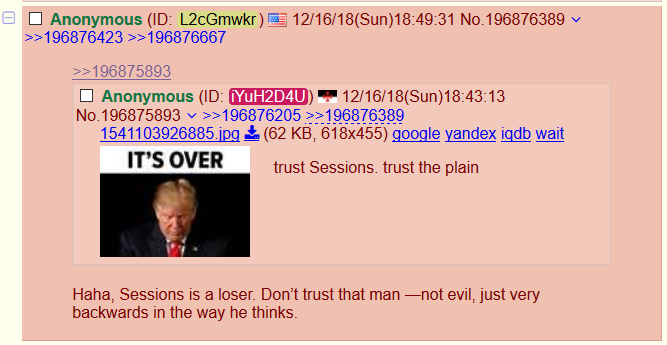 Lame, but everyone is entitled to their opinions.

I’m not surprised a JrSenatorAnon doesn’t know the details of #ThePlan. 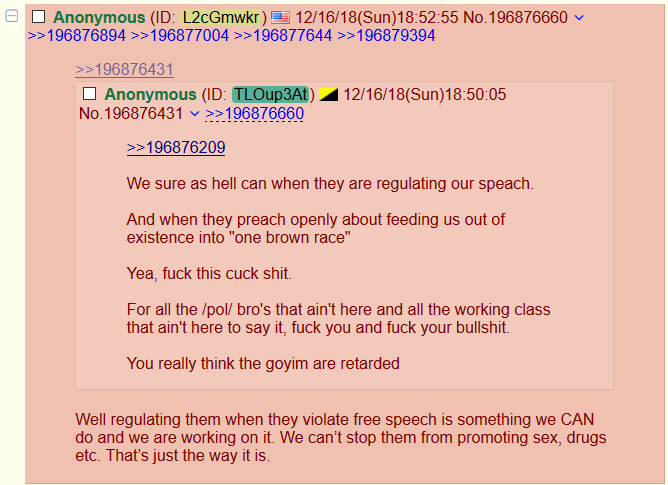 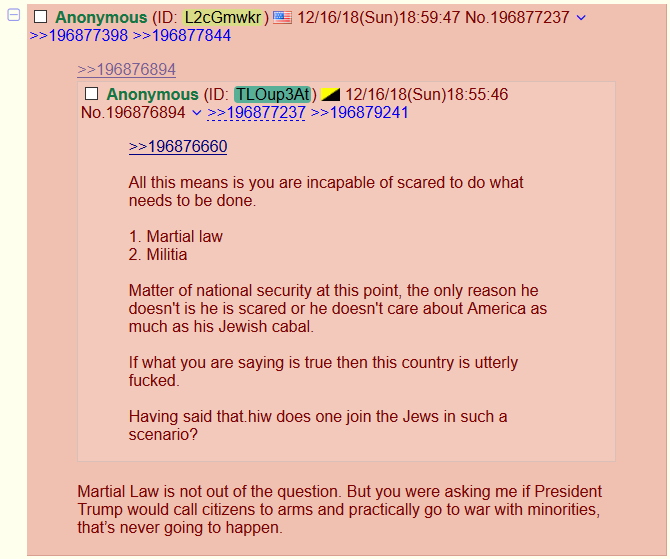 The Foundation is just the beginning. It will lead to many, many more things coming to light. 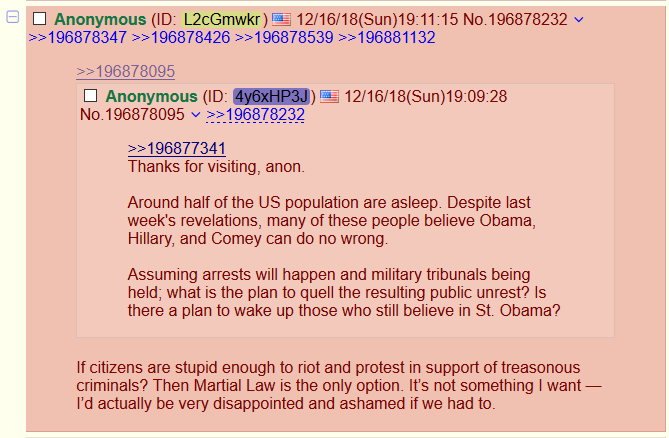 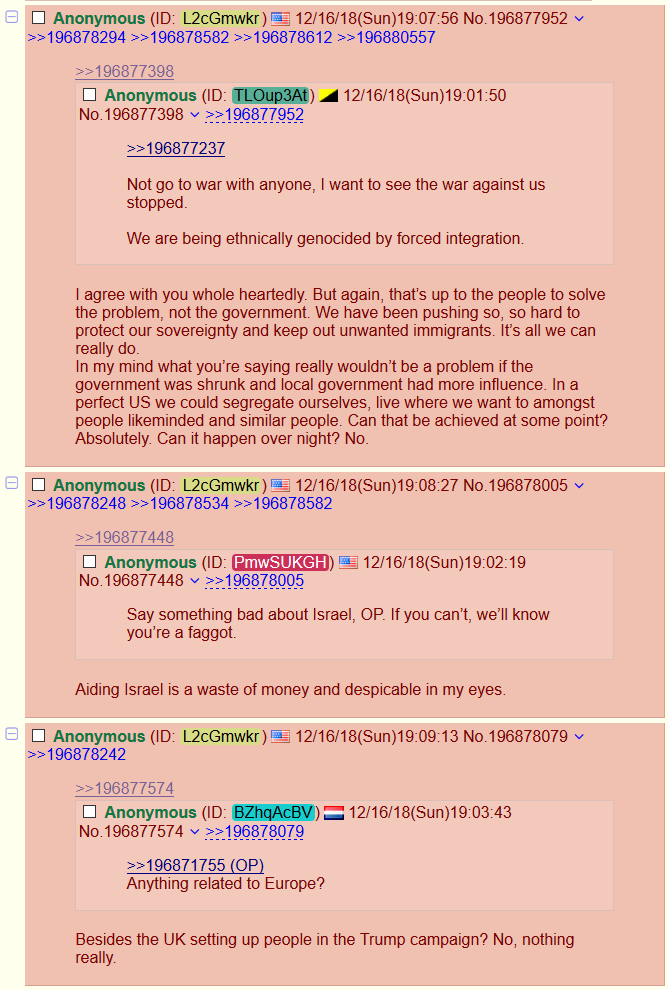 Interesting to see JrSenatorAnon basically advocating for ethnic Balkanization of the US. Might be inevitable, honestly. Tribalism is a powerful instinct, ingrained in humanity. It creates high-trust-societies. 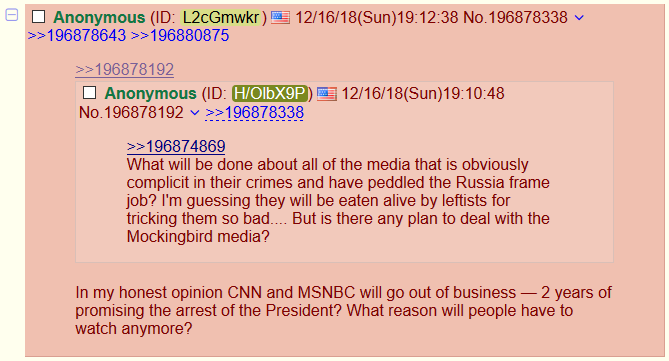 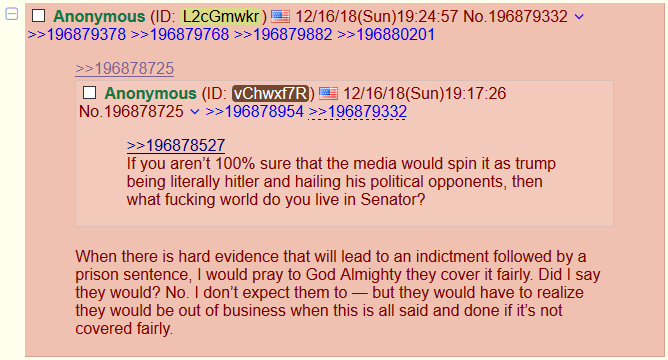 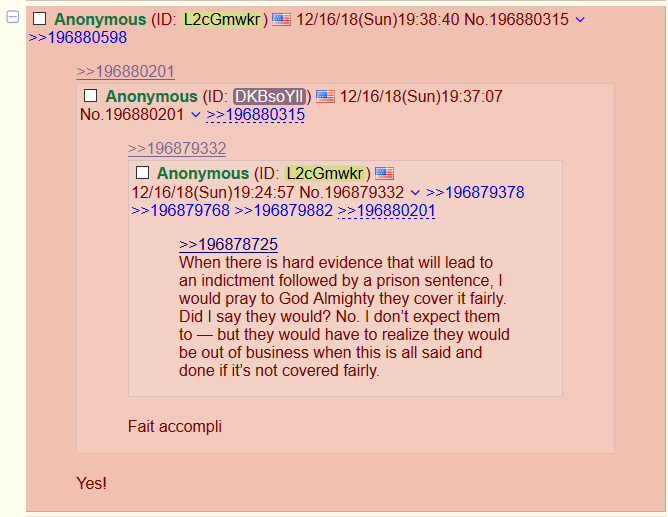 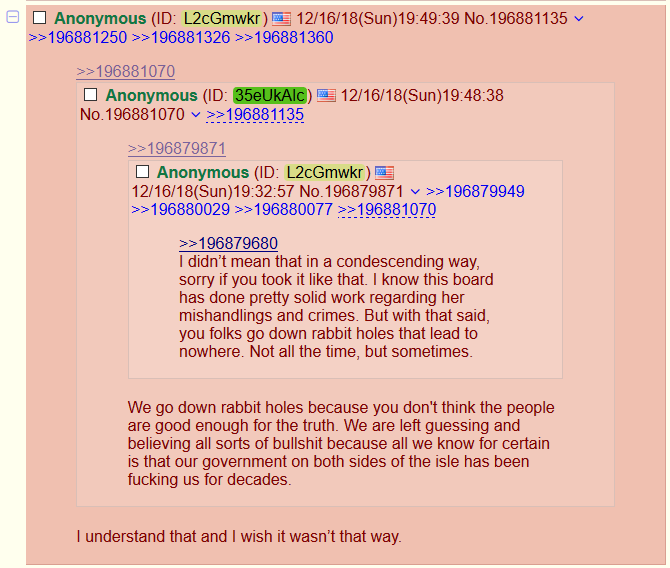 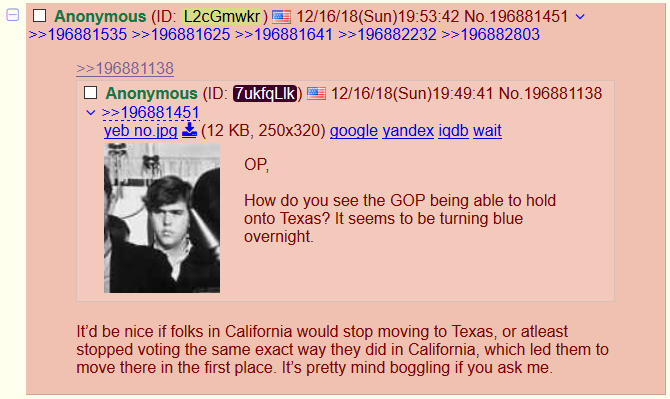 That’s the most annoying thing about Californians right now. They turned their state into a burning hellhole, and now they’re exporting the same ideas to “nicer” areas, with absolutely ZERO self-awareness. Austin is basically Little Ventura at this point. 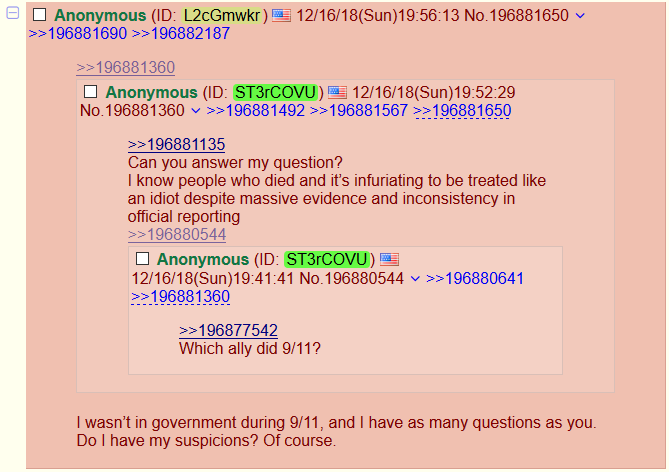 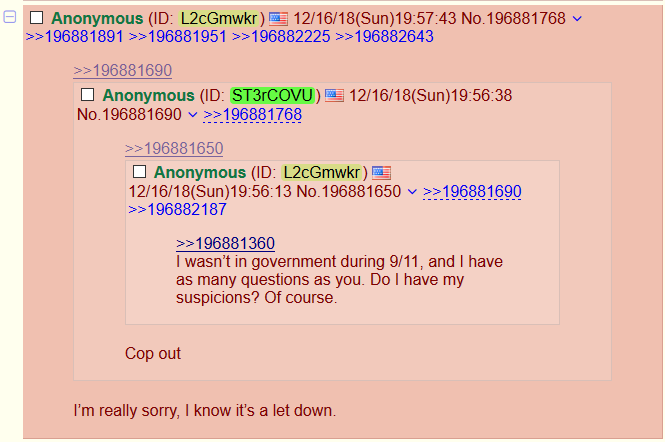 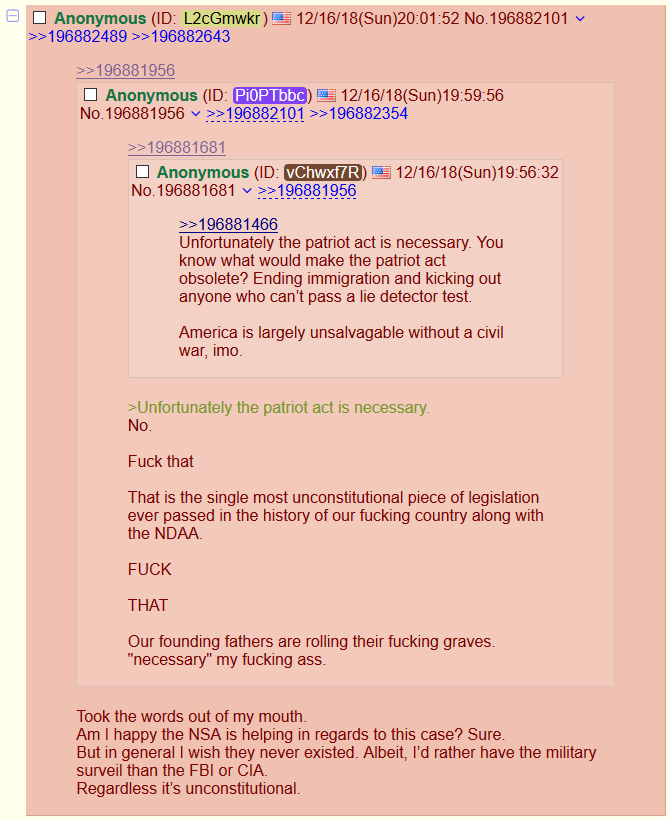 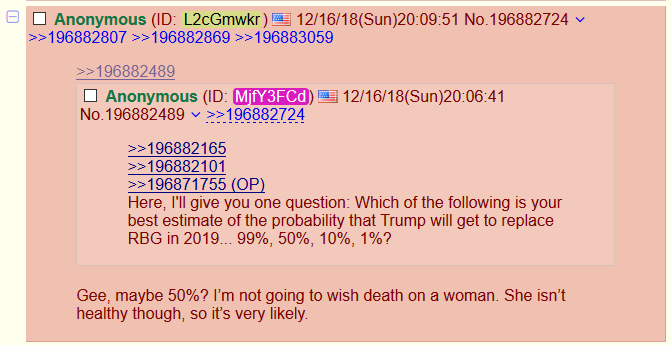 I mean, to be fair, she looks like she’s ready to croak at any moment.

He can’t, really. I mean, he’d have to establish his credibility somehow, but even then, without a tripcode, it’s a crap-shoot.

That said, go back to that post where JrSenatorAnon confirmed that the case was getting moved from an Article 3 court to an Article 1 court.

(Article 1 are basically military courts [created by Congress given the powers granted to it by Article 1 of the Constitution; thus, it’s name]. Article 3 courts are more what we normally think of as regular courts – from the Supreme Court, down to the District courts; the Judicial Branch of things).

In other words, a Military case was getting converted into a Judicial case.

Now who could require such treatment?

Anons expanded their thinking over on /QResearch/: 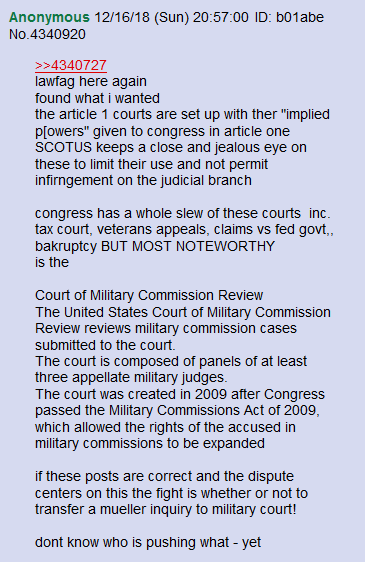 Here’s the link Anon referenced, if you want to see the EO for yourself:

Sounds awfully Mueller-related, if you ask me – especially considering the recently recovered texts from Strzok’s phone.

This could be very big. And I think this, if nothing else, is the biggest take-away from it all: 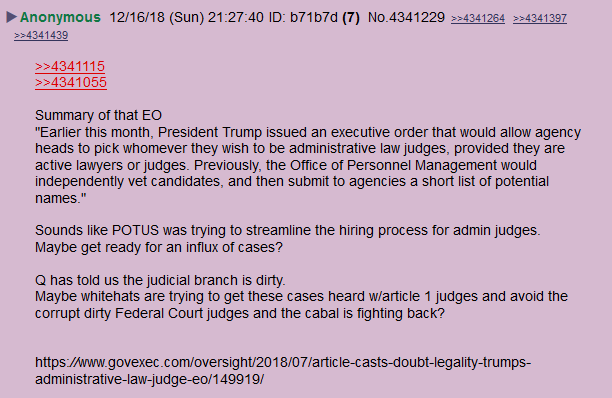 Well, I just wanted to make you all aware of that, seeing as none of it would have been picked up upon by any Q aggregators. Again, YMMV, but I thought this was compelling enough to report on, and naturally, I hope you agree.

I wanted to take a moment to highlight some recent Gab threads I’ve composed, in order to fill you in on some major happenings.

I know I harp on and on about following me on Gab, but there’s a good reason for it. Big articles take a lot of time to put together. With Gab, I can respond very quickly to whatever is happening, and build threads as things progress.

I want to highlight some of those worthwhile threads, starting with this wild three-part dig on Arlington National Cemetery. Each link will take you to an individual, subsequent post:

Here’s a thread talking about why a #GovernmentShutdown may be EXACTLY what the doctor ordered:

And here’s a major two parter that started off with an intentional misspelling from Rudy Giuliani, that inevitably lead to much bigger discoveries:

(You may have to download, or otherwise zoom in, on that last big screenshot there).

And I’ll tell you again, give me a follow over on Gab. I realize it’s not quite the same as getting massive articles that take you anywhere from 1 – 6 hours to read, but it does allow me to create nice, digestible, mini-blogs of a sort, on a rolling, up-to-the-minute basis.

Plus, we have a lot of fun there, too.

Things are moving right along with the book. I’m generally able to crank out a couple thousand words a night, but I’m certainly struck by how much of a moving target this all is – especially with things like the recent Arlington Cemetery revelations (should they turn out to be true).

And before you ask, yes, I have a title in mind.

No, I’m not ready to reveal that just yet.

Oh, there’s also one other thing I’d like to talk to you guys about…

This is an idea I was playing around with the other night, but I was thinking…

How cool would it be if we held a QAnon March in Washington D.C.?

Now, honestly, I’d love to get some direct feedback, not only from the QArmy and Anons out there, but also from Q himself.

In my mind, I’m just sick of seeing all the #LunaticLeftist marches getting all the attention, and I’m tired of hearing (some) patriots out there despair. WE can help in this scenario, and what better way to make our presence undeniable than by taking to the Capitol?

I honestly believe we could EASILY get over a million people (if not multiple millions) peacefully marching through the District.  And boy, wouldn’t that force the question. Could you imagine if a MILLION QAnon patriots descended upon DC, and the likes of CNN just closed their eyes and ears and pretended like it wasn’t happening?

But I also am aware of what kind of a target such an event would be, how so many security issues there are, and how much opportunities there would be for subterfuge. I wouldn’t want a group of spooks infiltrating with Qshirts, and then instigating violence or something horrible – or worse. And that’s the kind of reality we’re talking about here.

I’m also keenly aware of the level of planning and coordination that goes into something like this. So it’s CERTAINLY not something I could pull off by my lonesome.

But there are a lot of possibilities here, and if anyone is a specialist in this kind of thing, hey, reach out. Best way to do that, again, is through Gab.

And once more, if Q wanted to chime in on this particular idea, I’d be all ears. If he gives the green-light, let’s go for it. If he pumps the brakes, we’ll respect that, absolutely.

But I wanted to field this idea with you guys here; to sort of inject it into the conversation and get a feel for what’s possible.

Needless to say, I think a lot of people are going to like this idea.

One more thing before we go, and that’s a reminder of the CHRISTMAS SALE:

That’s right guys, all my hats, shirts, mugs – everything – is on sale right now for Christmas.

Following the link will get you all the details you need. 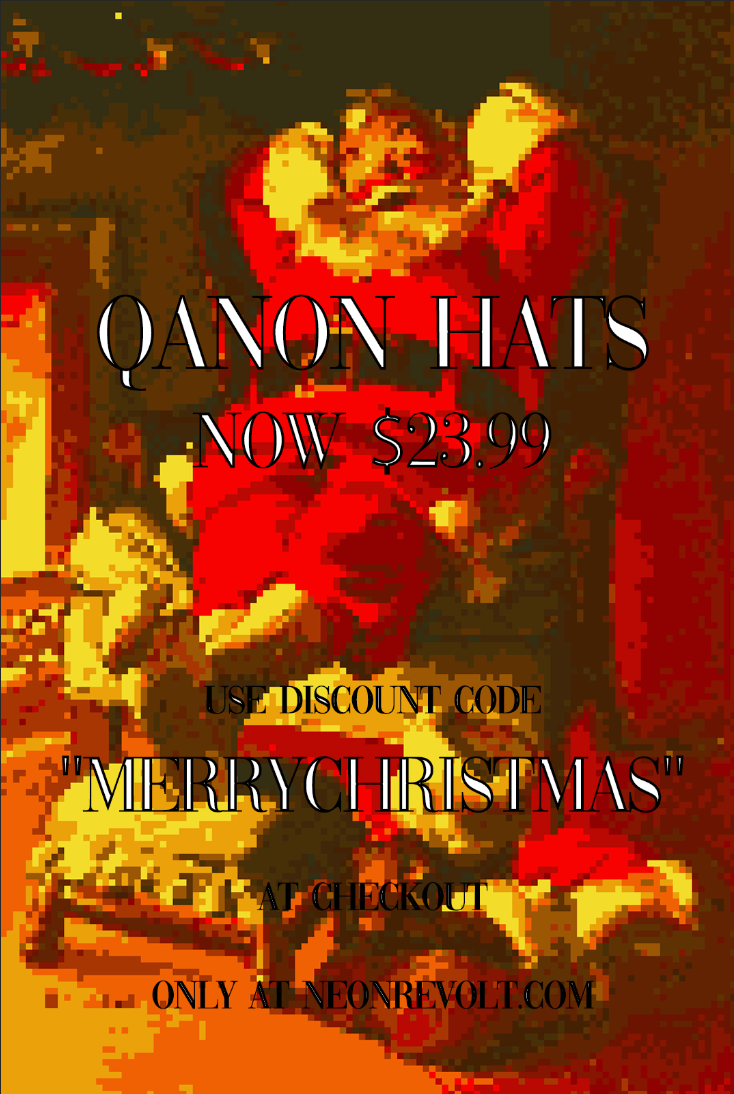 Hi guys, I wanted to take a moment to update everyone on the state of the site, and my efforts over the past few weeks. Those who follow me on Gab will already know what’s up, but not everyon…

Thanks so much, guys!