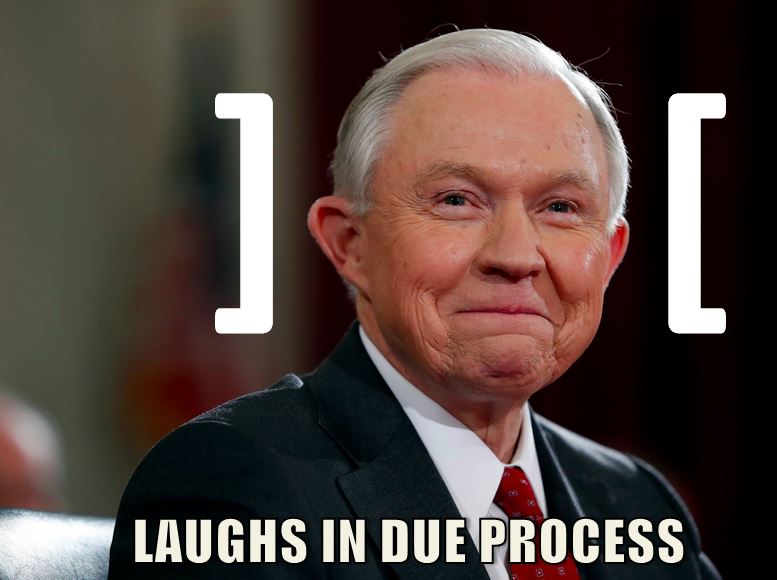 In case you didn’t get it:

Anon has a good theory on how it will happen: 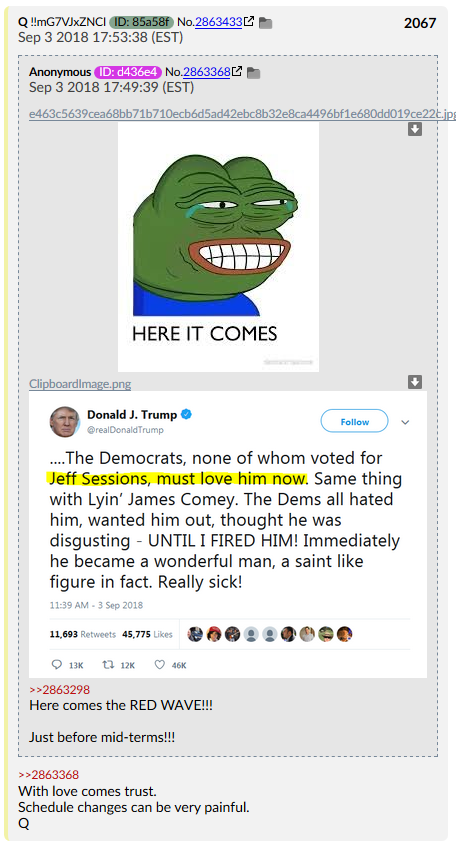 Gregg Jarrett: AG Sessions ‘Will Be Fired’ After Midterms Due to Carter Page Surveillance

Fox News legal analyst Gregg Jarrett said Saturday on Fox & Friends that he believes Attorney General Jeff Sessions will be fired after the midterm elections. His comments come after a court filing uncovered by Judicial Watch revealed that no FISA court hearings were held regarding warrants to spy on former Trump campaign aide Carter Page.

…get Lefties to love Sessions? 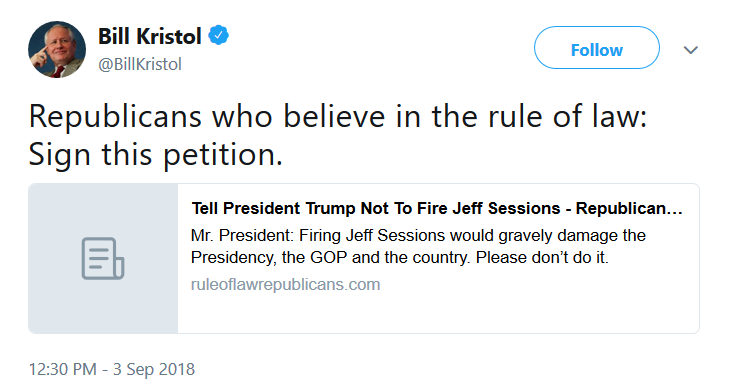 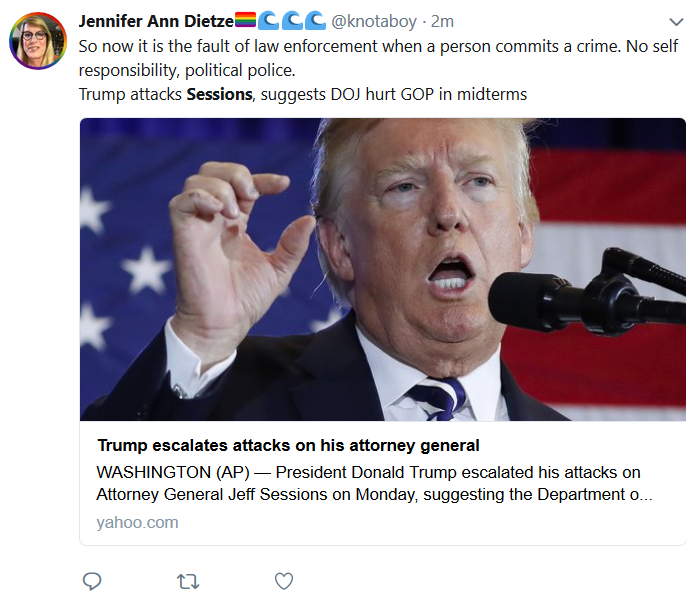 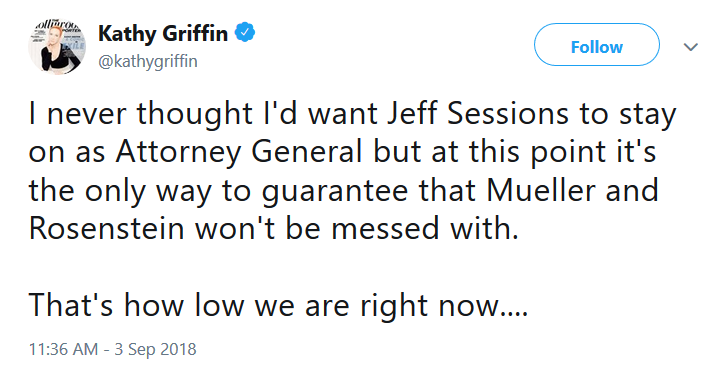 On second thought, nah, you do you.

Ah, okay… So the Magic Sword drop from last night was pointing us to a strike on a Clown base in Syria. #Anon points us towards this monument as the give-away: 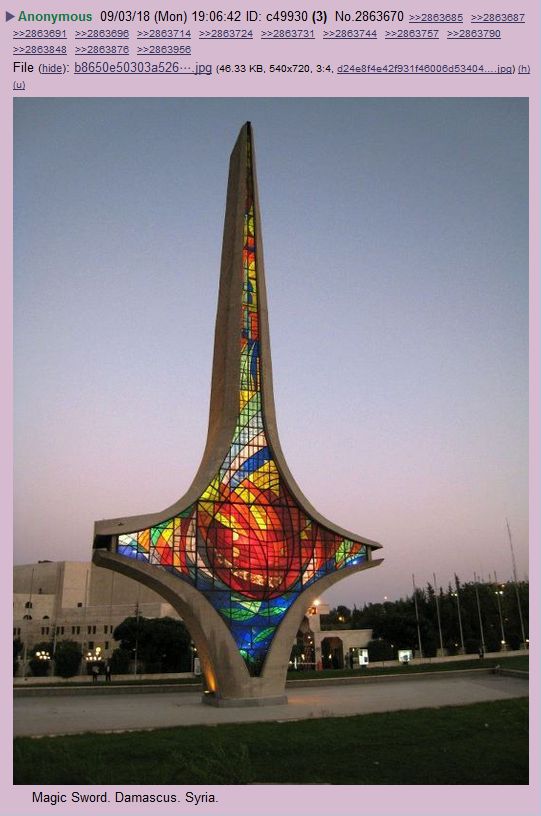 Umayyad Square ( Arabic: ساحة الأمويين‎ / ALA-LC: sāḥat al-Umawiyīn) is a large and important square in Damascus, Syria. It connects the city center with several important highways and areas and contains various important buildings including but not limited to the Ministry of Defense, Syria’s national Opera house and the headquarters of the Syrian Armed Forces. 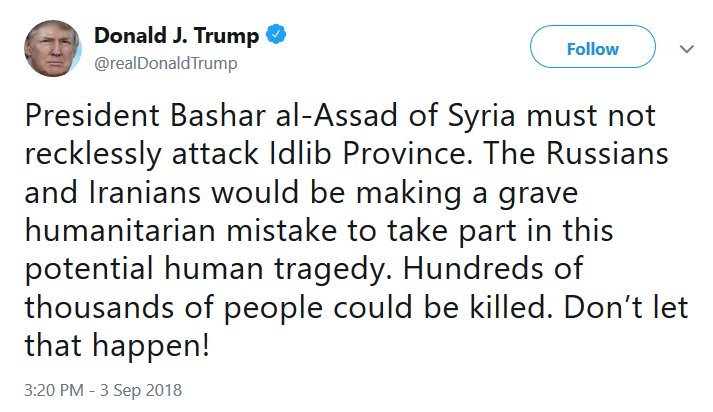 Syria has denied reports that a series of blasts at a military airport near Damascus on Sunday were from Israeli air strikes, state media say. The loud blasts, reported at the Mezzeh airport, were caused by an explosion at a munitions dump, Sana news agency said, citing Syrian military sources.

The loud blasts, reported at the Mezzeh airport, were caused by an explosion at a munitions dump, Sana news agency said, citing Syrian military sources.

The incident was the result of an electrical fault, the agency added.

Was that “Electricity” a platoon of highly trained, 240 lb, grizzled commandos armed to the teeth, wearing night-vision goggles, and dropped in by heli in the middle of the night?

Anon gives us an overview of other potential strike sites: 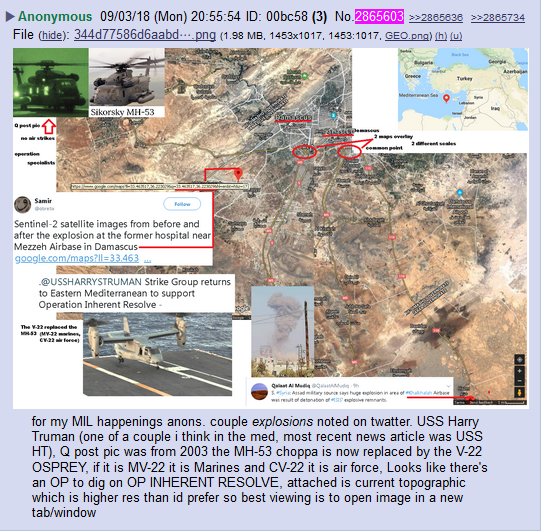 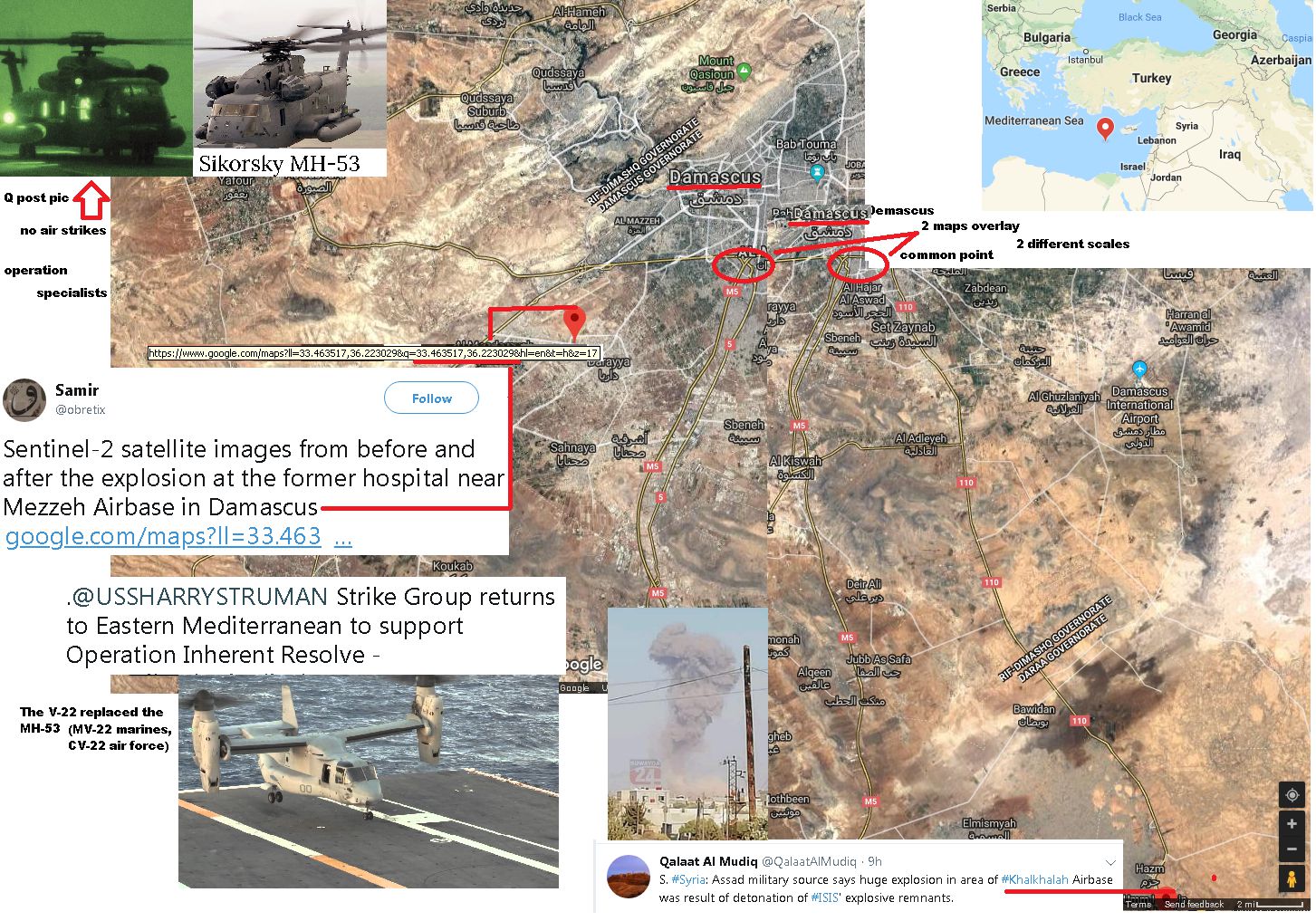 RonboSoldier had a lot to say along these lines:

Copied, in its entirety:

John Glacalone is easily the most interesting one of the bunch right now, and #Anon did a good dig on him:

On the surface, looks like a good guy. Wonder if they’ll bring him in to testify at some point…

Oh, and another Anon noticed this… 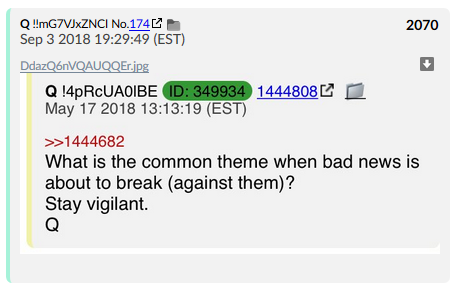 False flags, guys. Be careful out there. This is the 2nd warning we’ve had from #QAnon in under 48 hours… 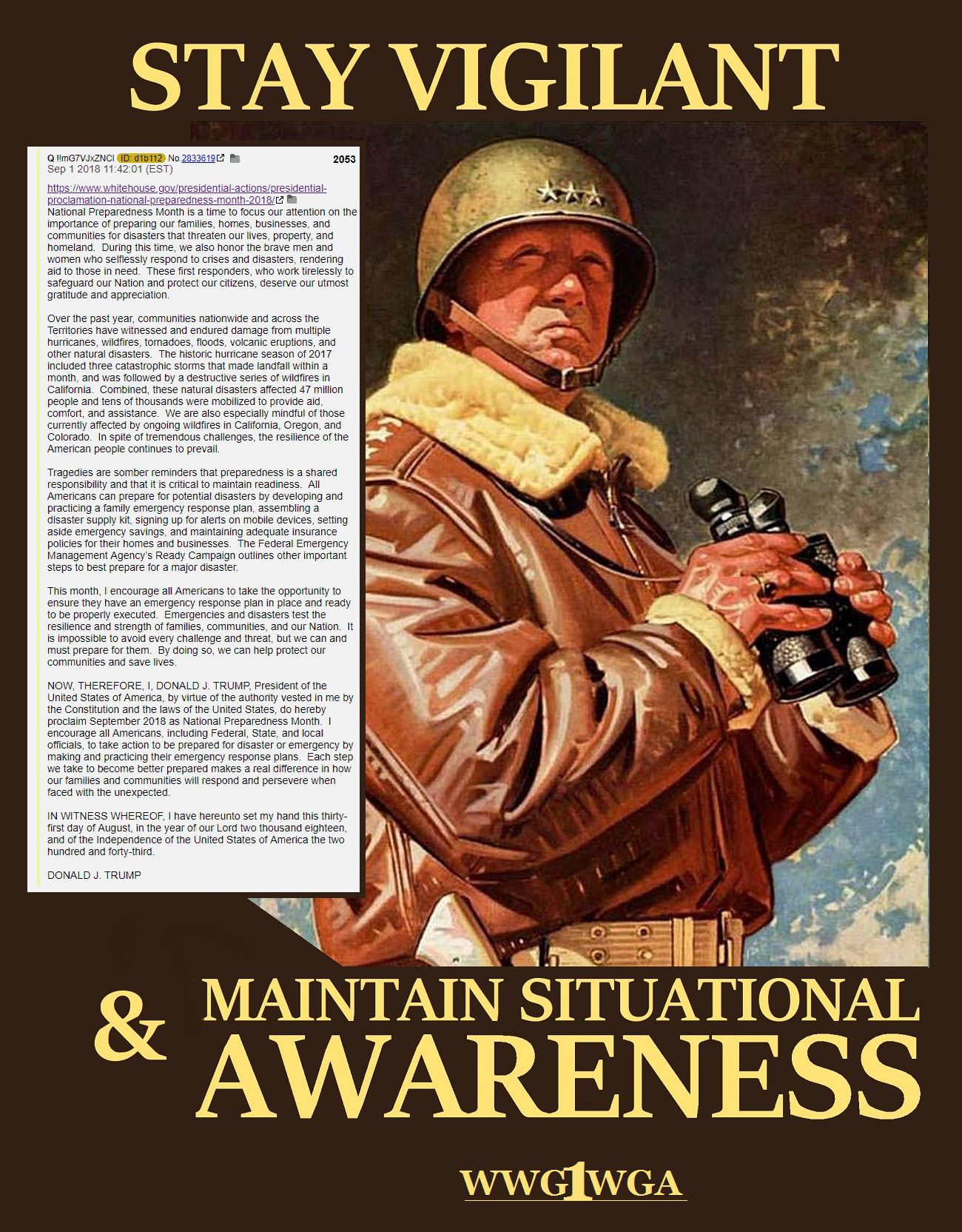 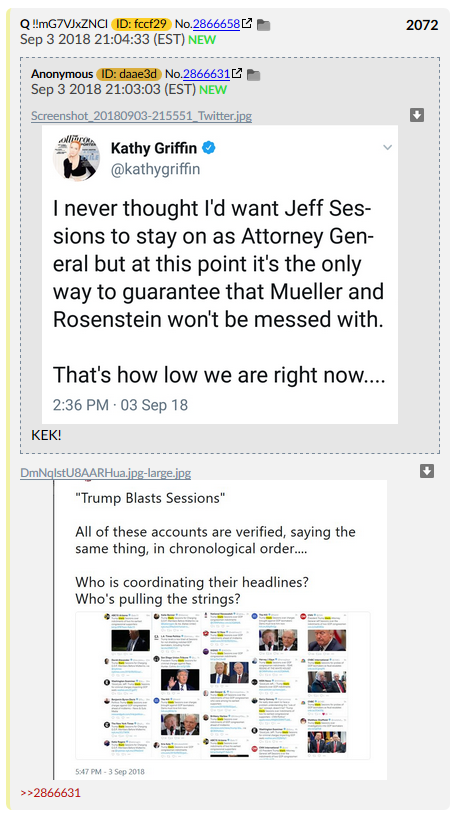 Oh, come on. I swear I picked out that Kathy Griffin image before this anon did lol.

It IS really funny, though.

Here’s the other image from that drop: 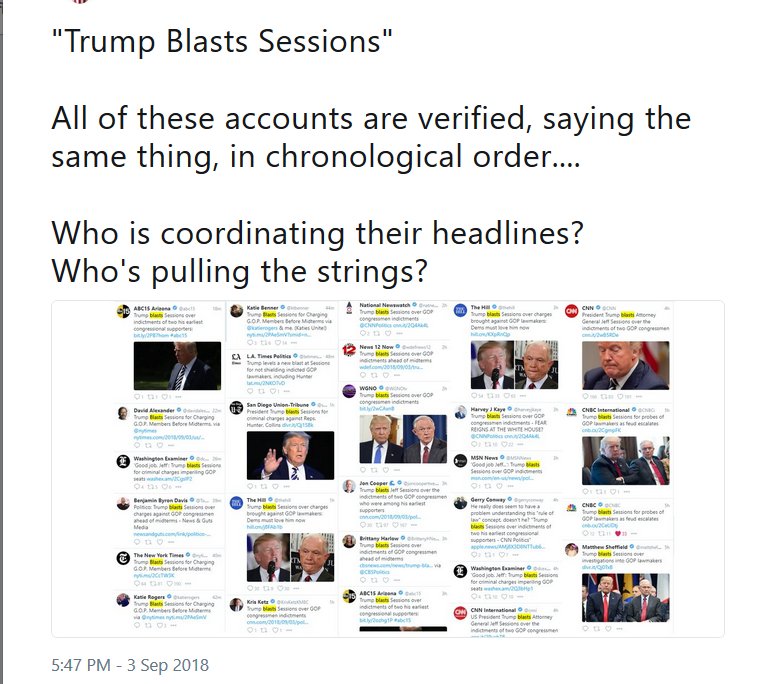 Now this (and, admittedly, a comment in Gab) got me thinking.

The media can’t be so stupid as to not be aware of Q’s plans.

Their marching orders are still coming from the CIA through the SecureDrop system.

At least, the “CIA,” ostensibly speaking.

To see them all just march like lemmings off the cliff when Q has been telegraphing his plans for the past few days makes me think the Clowns no longer control whatever distribution mechanism they had in place through SecureDrop.

White hats now control it and are sending out the media’s marching orders.

Prior to this, I believed they only had access to the system, so they could see the drops as they happened, and counteract them and such. I didn’t think Q meant they had total control of the system…

But then again, that’s kind of what the NSA specializes in, right?

This is, as far as I can tell, the only reasonable explanation at this point for as to why the #MockingbirdMedia would behave exactly like the lemmings they are, when Q has been boldly shouting his plan from the rooftops for the better part of a week.

There’s no other reason they would walk right into a trap like that.

They just, for whatever reason, haven’t figured this out, yet.

But here’s that graphic again, this time zoomed in on the individual tweets: 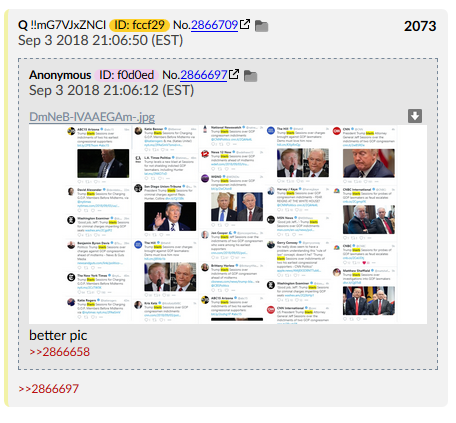 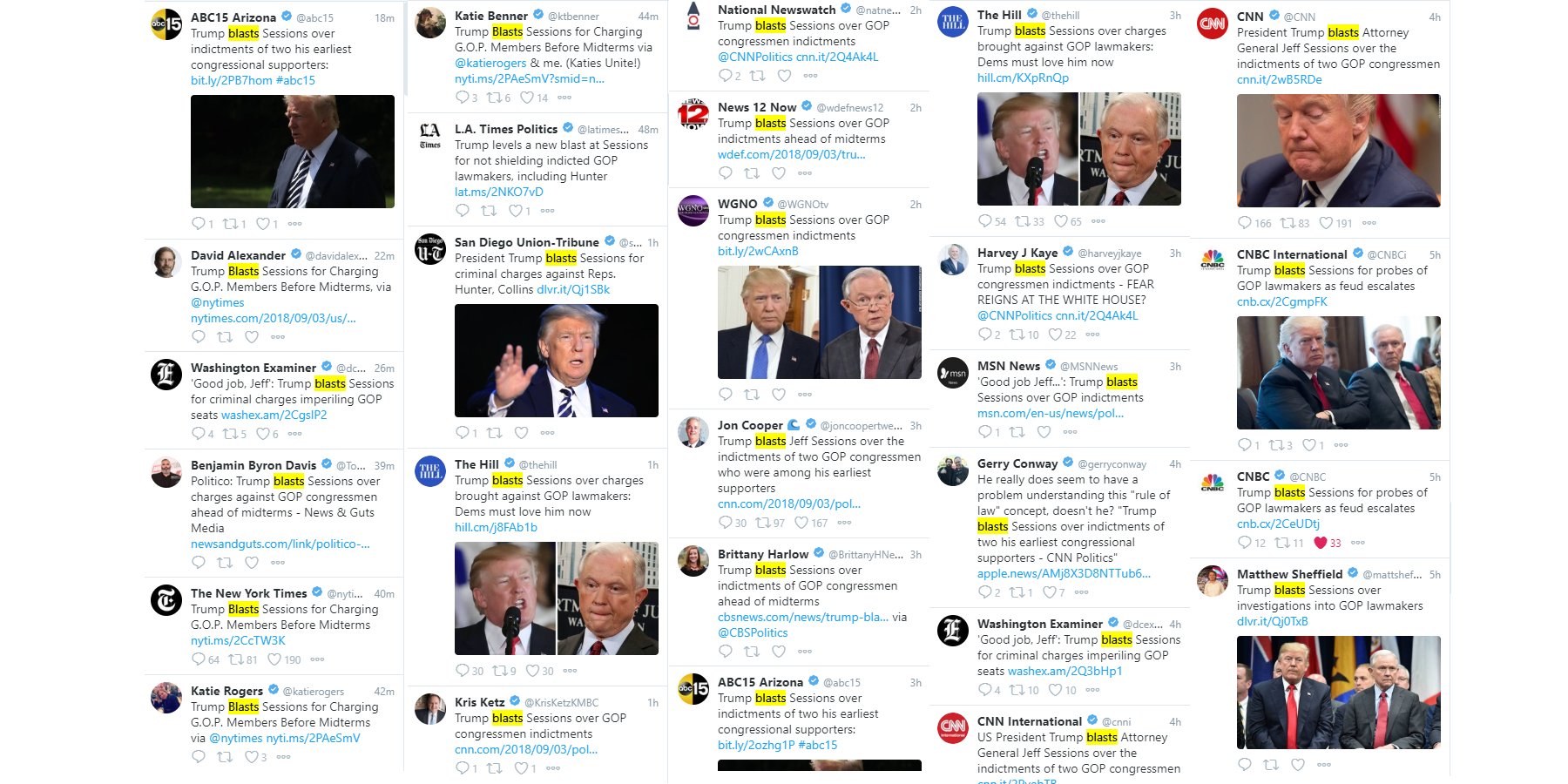 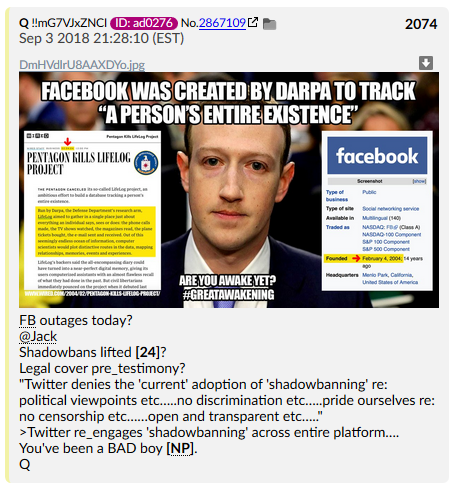 Hey Q, my twitter account is still banned. Any chance of me getting it back by you guys working your magic?

(It’s fine if not. Been rocking Gab for a while and it’s growing at a very rapid pace – and I hope you guys come on over, soon… if you’re not planning to already… and I have my suspicions about that… But you know I’m biased ;D)

Speaking of Gab, I did note the facebook outages when they happened: 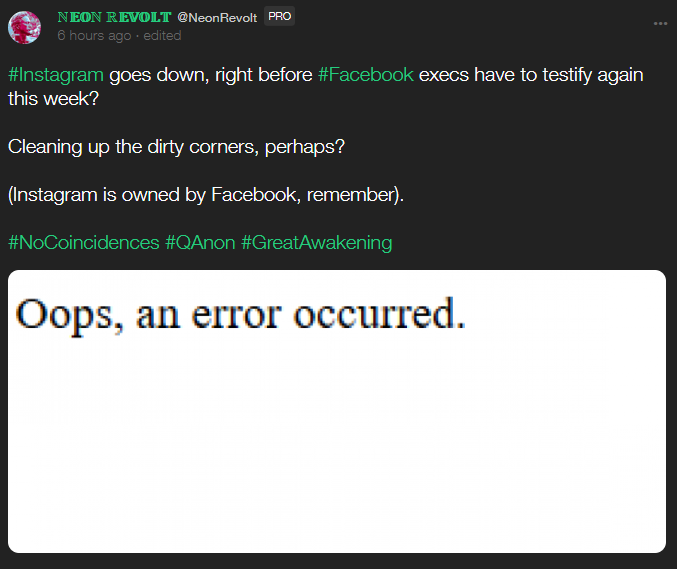 And yeah, this was my reaction of the Nancy Pelosi line, too, Anon: 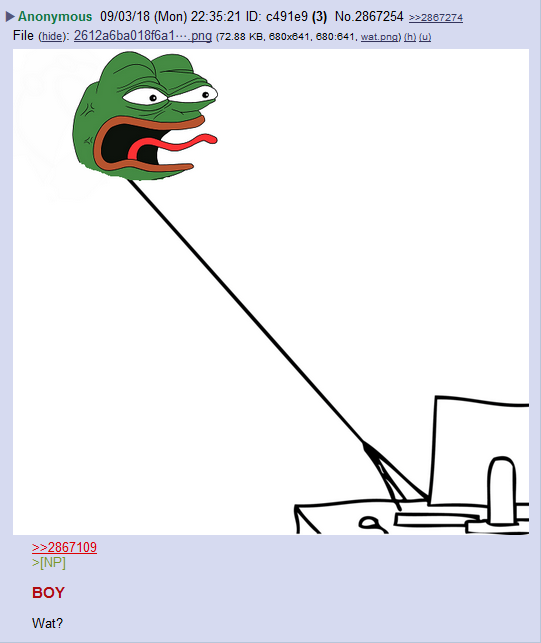 But in all seriousness, I’m thinking it’s a marker, like BIG. 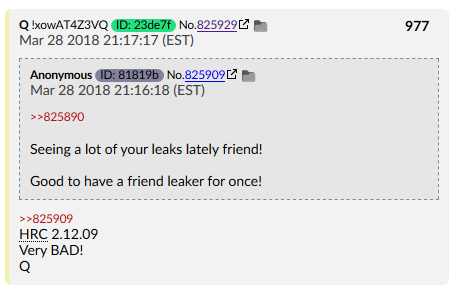 Do me a favor.

Tell her to “lean in” when she’s testifying in front of Congress.

I’m sure that incredibly astute/insightful/profound/book-worthy business advice will prove itself in the arena on Wednesday, right?

Tell her to “lean in” when she gets grilled.

Tell her to “lean in” when she finally gets cuffed. 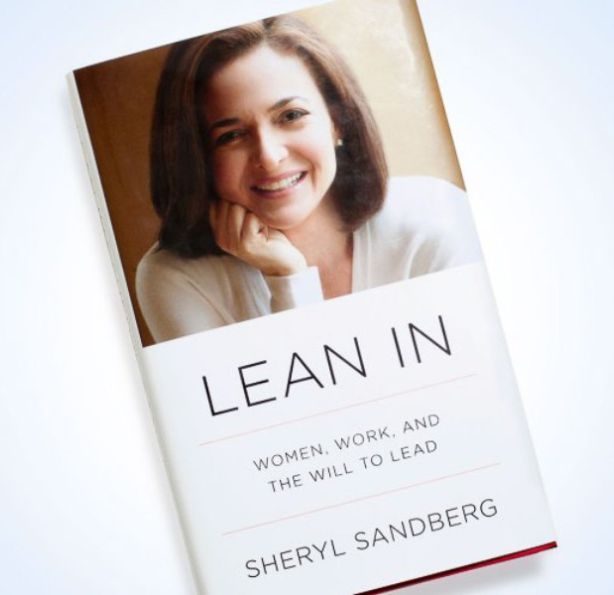 And tell her to “lean in” when she, and all her Cabal buddies in Silicon valley, are finally hauled off to #GITMO for the rest of their unenviable lives.

Hey guys, thanks for reading and sharing my articles today. I’m excited to share this with you because Threadless decided to give me a coupon to give to all my readers.