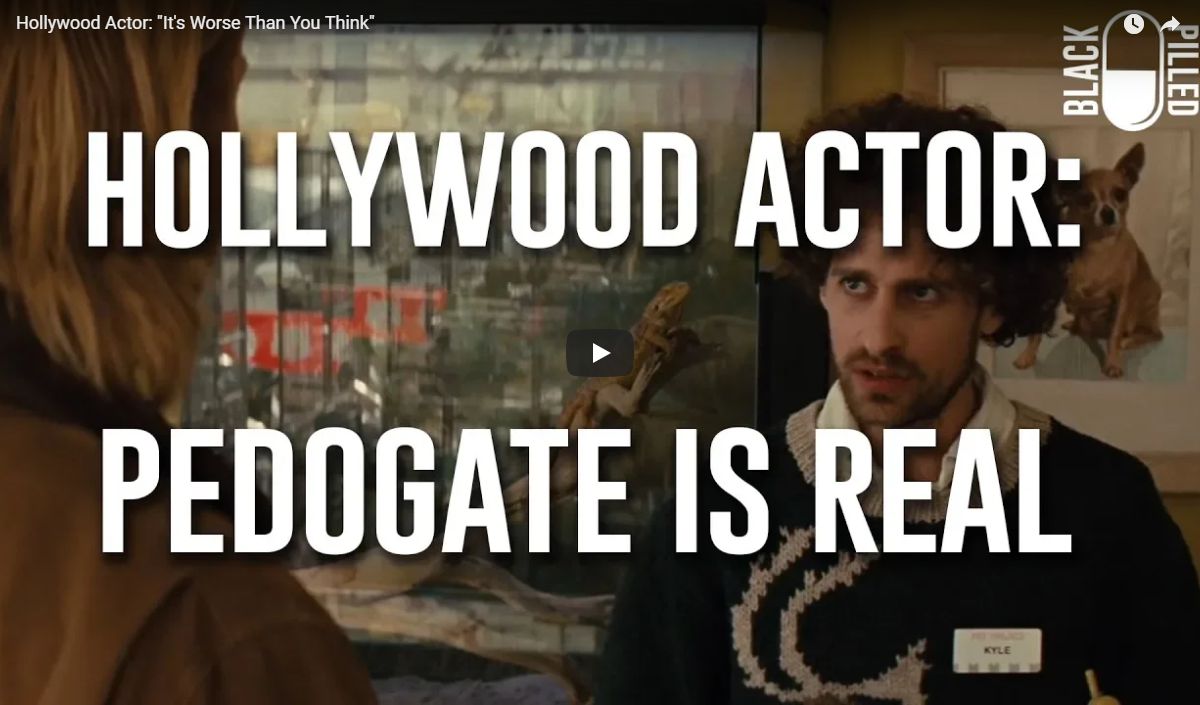 To follow up on my Whistleblower article, let’s look at an actual whistleblower who has been talking for the past few days.

For those who missed it, Isaac Kappy is an actor who is blowing the whistle on #Hollyweird, just out in the open…

If you haven’t seen it, start here:

After that, he started dropping on Twitter, but decided that it was time to move to 8ch, because Twitter was censoring him, limiting his reach, etc. The usual cuckery. 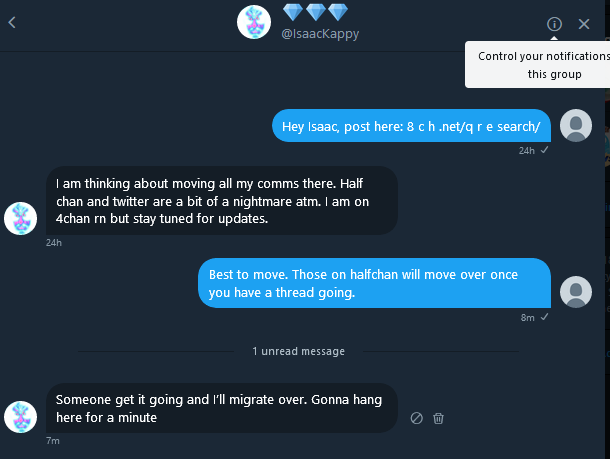 And thus, “Honeycomb” was born and his drops started. Now, these aren’t very cryptic – which is good because it means there’s not much decoding required. In fact, I’m kind of shocked at how straightforward he’s being, but maybe that will be the key to his success; going SO public, SO wide that no one can touch him because everyone will be watching.

I’m not going to say whether or not that will work… but I will boost his signal with my platform (and keep my commentary to the barebones essentials in the meantime): 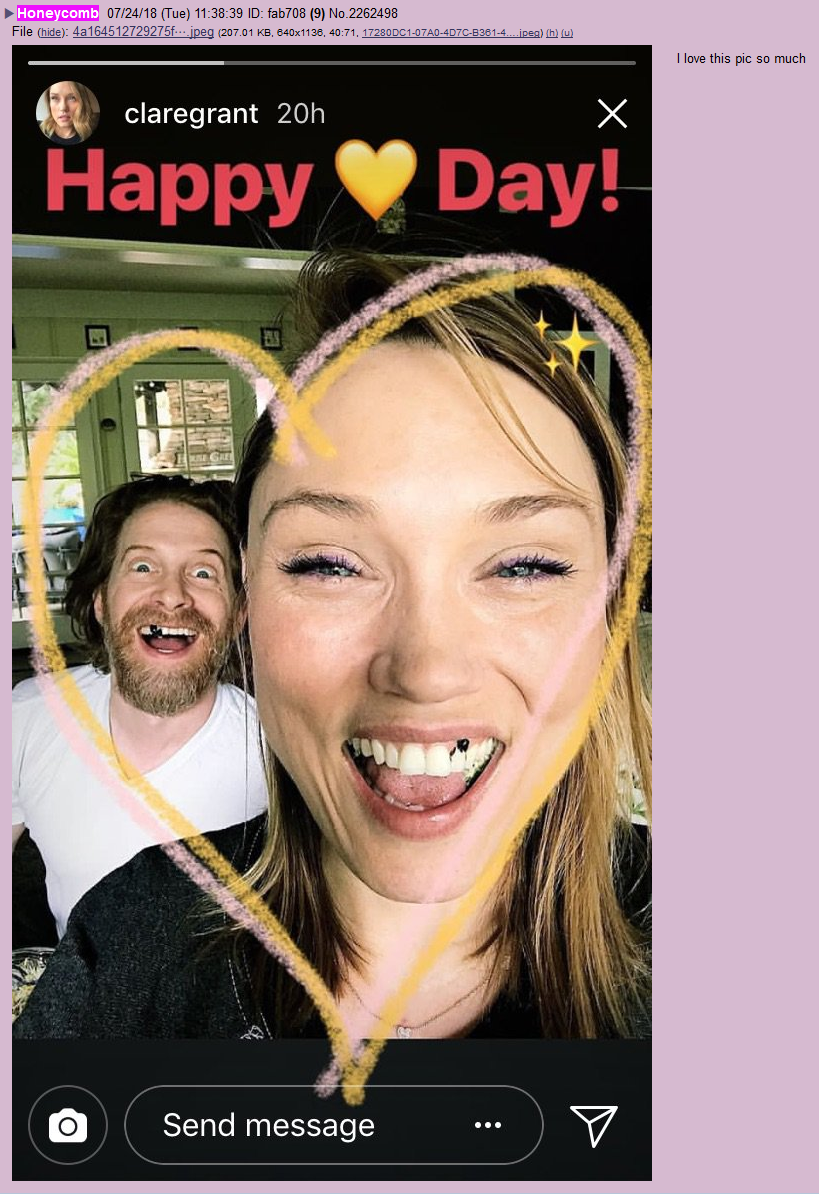 This is Seth Green and his wife Clare Grant.

Seth is recognized for his work on the Austin Powers series and his tv show, Robot Chicken.

Clare Grant is just some actress, I don’t know. I’ve never seen any of her stuff.

This was #Kappy’s first real drop:

I captured most of these in tree view, so you could see these drops in a sort of Question-Response format. Kappy’s drops are all labelled Honeycomb:

Those captchas can be a pain man, I know.

Always have to have a PLAN if you’re going to drop. This can not be overstated.

He’s got a deadman’s switch in place, too, which is exactly what I advised all other whistleblowers to have, just in case:

And finally, he gets into it. He had a buddy working with him, who added the annotations in the brackets: 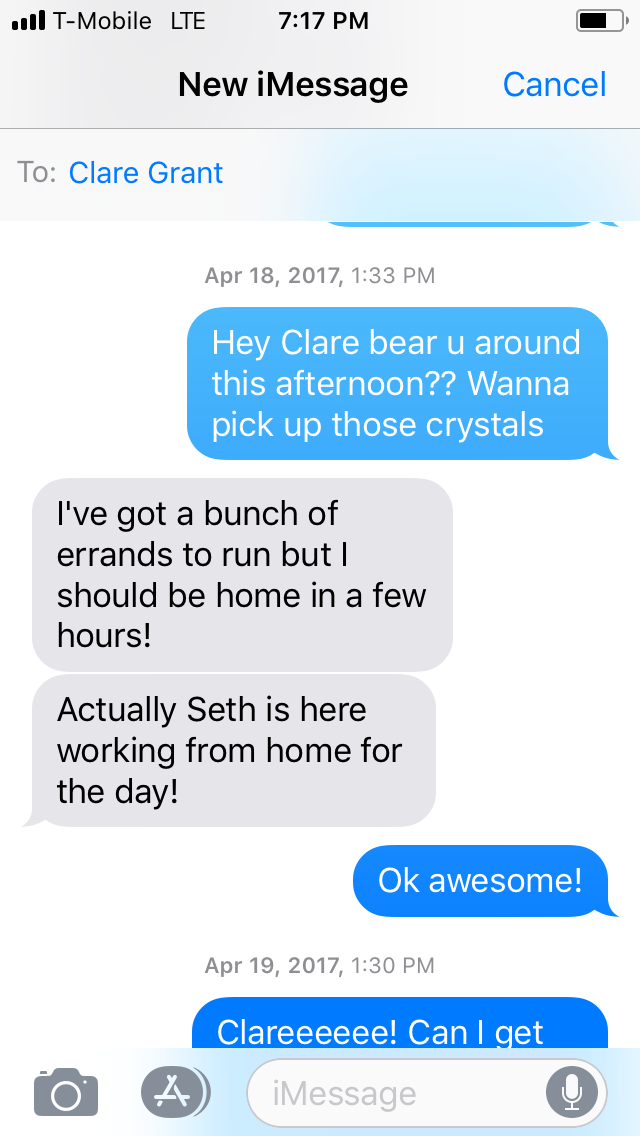 Now, keep in mind, Kappy has made these claims several times, very publicly now. If he was lying, he could really be destroyed in a lawsuit. The fact that he keeps repeating this, and keeps reinforcing this story lends credence to what he’s saying. 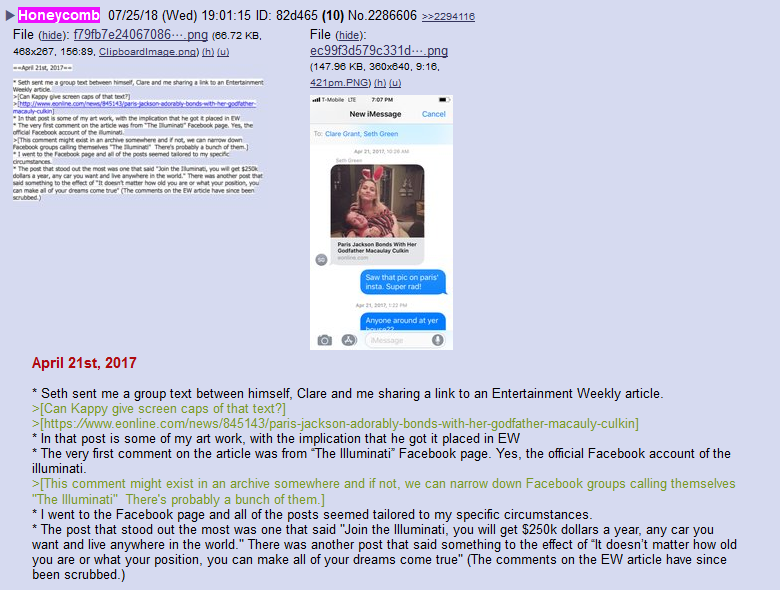 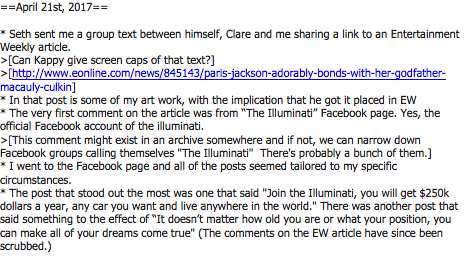 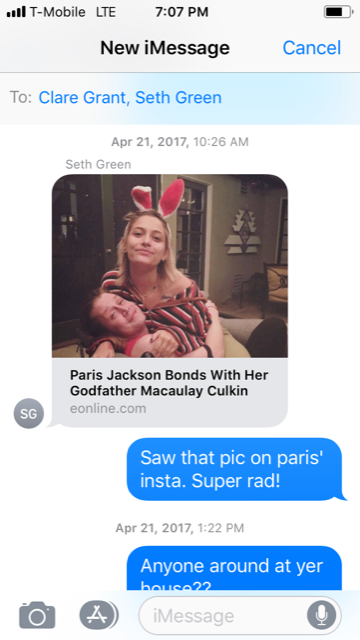 The whole Macaulay Culkin/Paris Jackson thing is…. weird. Especially given the ages.

And remember, Culkin and Green were in that degenerate film together in 2003 – which almost looks tame by 2018 standards – Party Monster:

Cabal imagery all over the place in that, just so you can know how long this stuff has been going on. 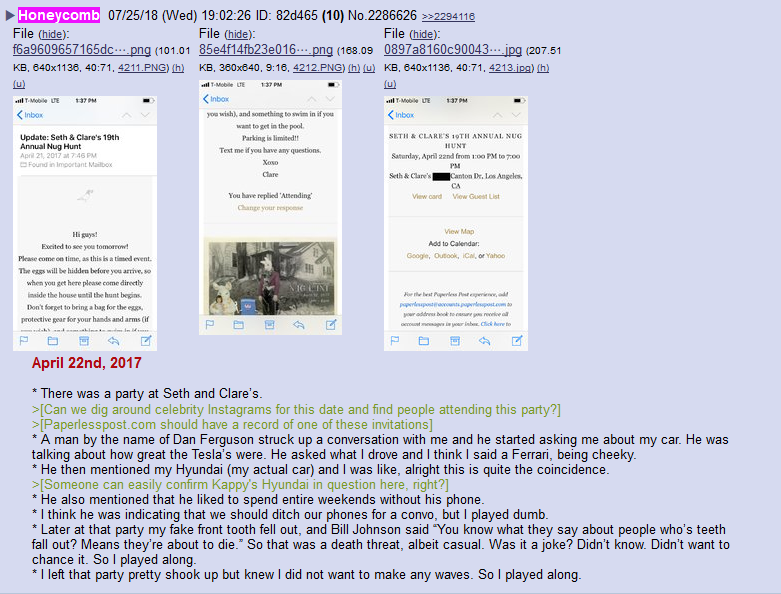 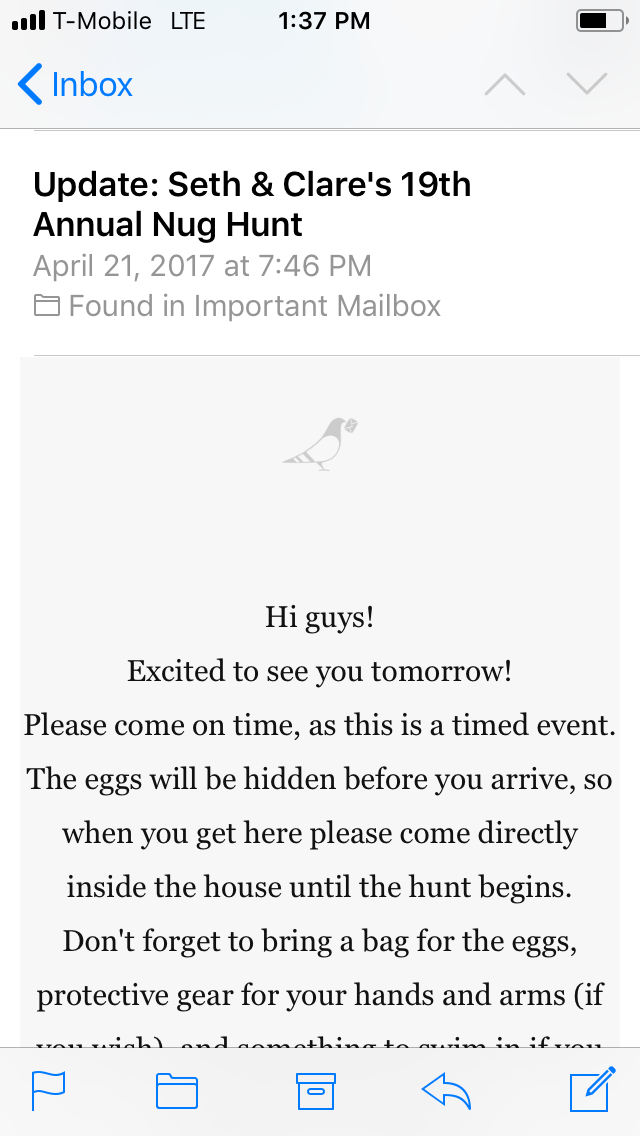 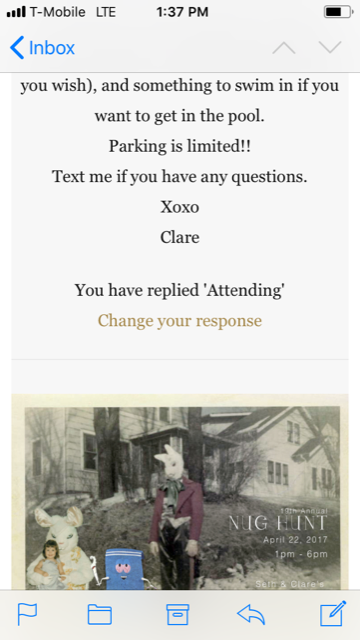 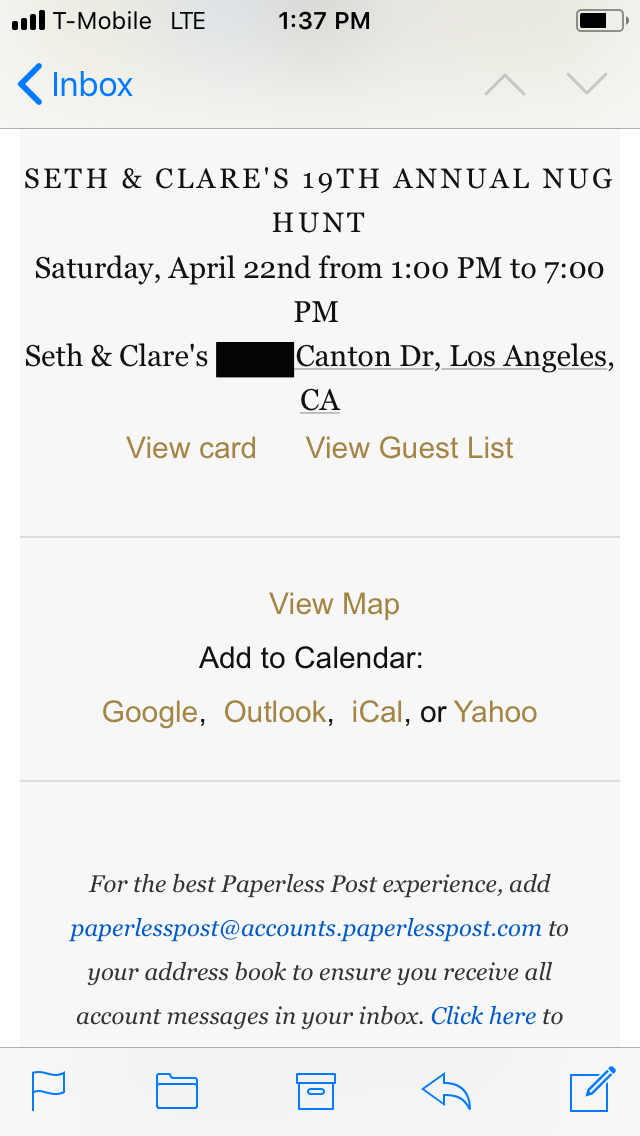 I will say, it’s good he’s posting all this supporting evidence in the form of screenshots from his phone. Really bolsters his credibility. 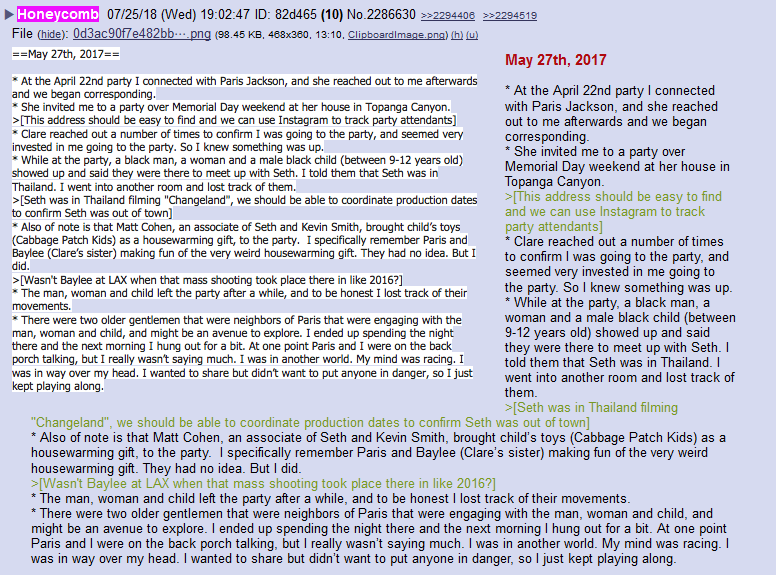 Honestly, this is a pretty normal reaction to Pizzagate-related stuff. I’ve told you many times how I would involuntarily weep and shake from it all. I have more than a few gray hairs as a result from the days when that all came spilling out in the wikileaks.

And it’s also good he didn’t go to LAPD.

I’ll trust you know enough by now to know what these symbols mean: 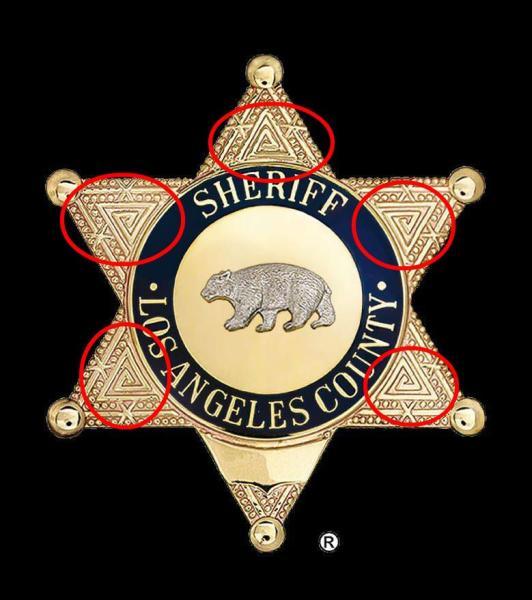 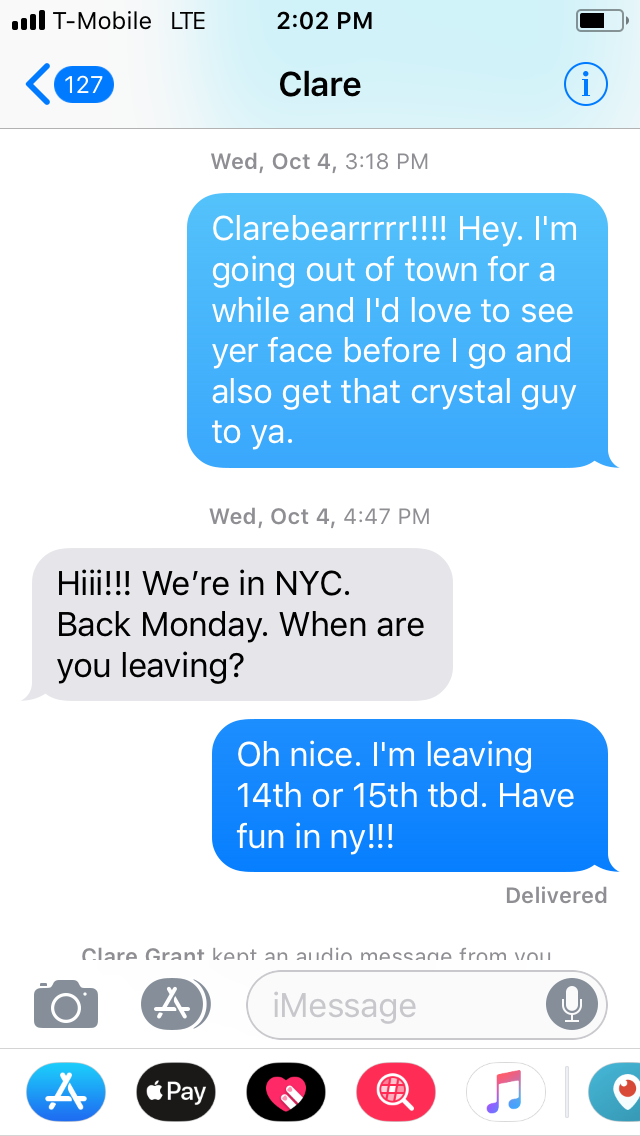 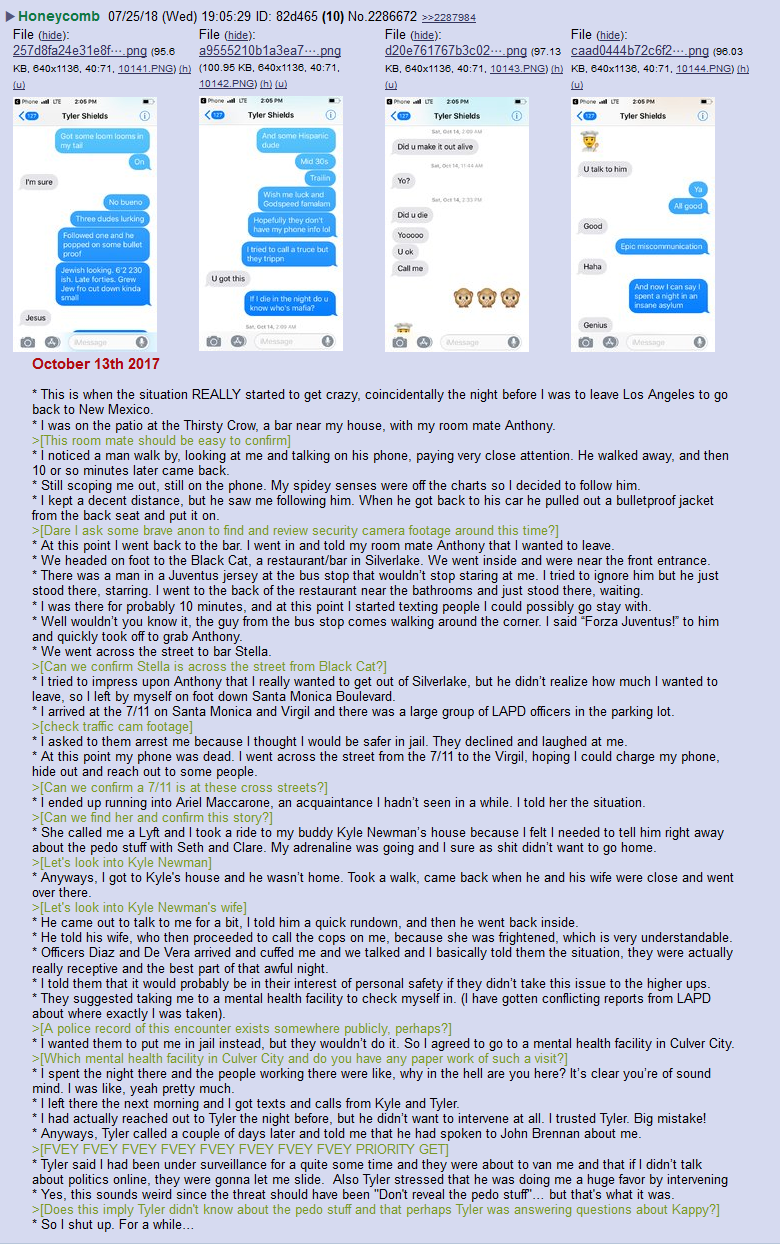 Wow. They got John Brennan involved.

Be careful who you trust. 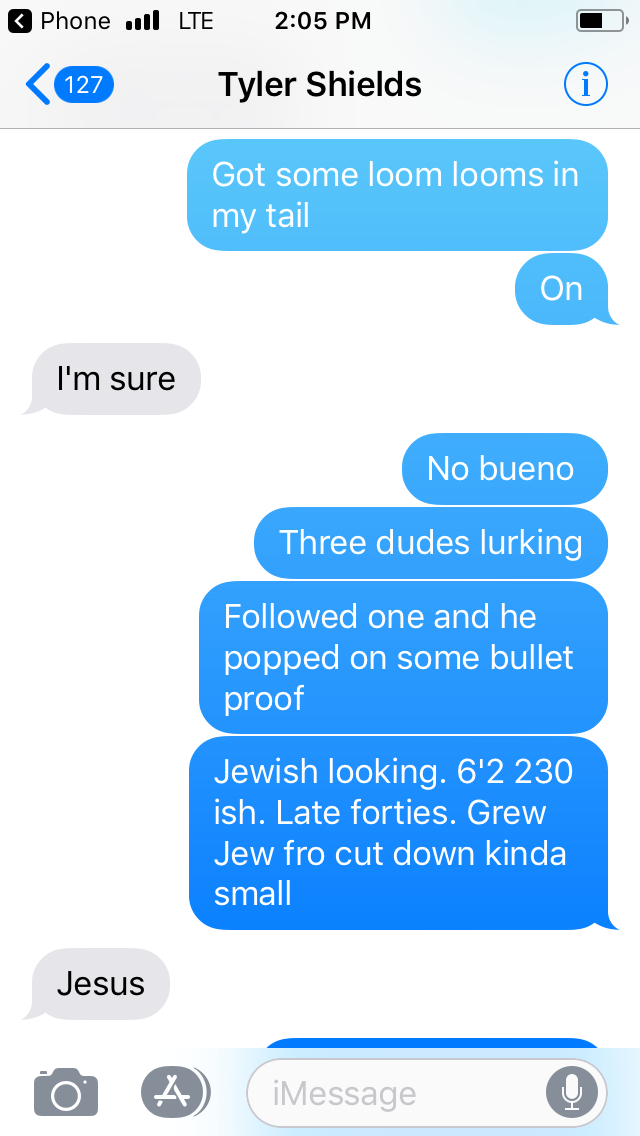 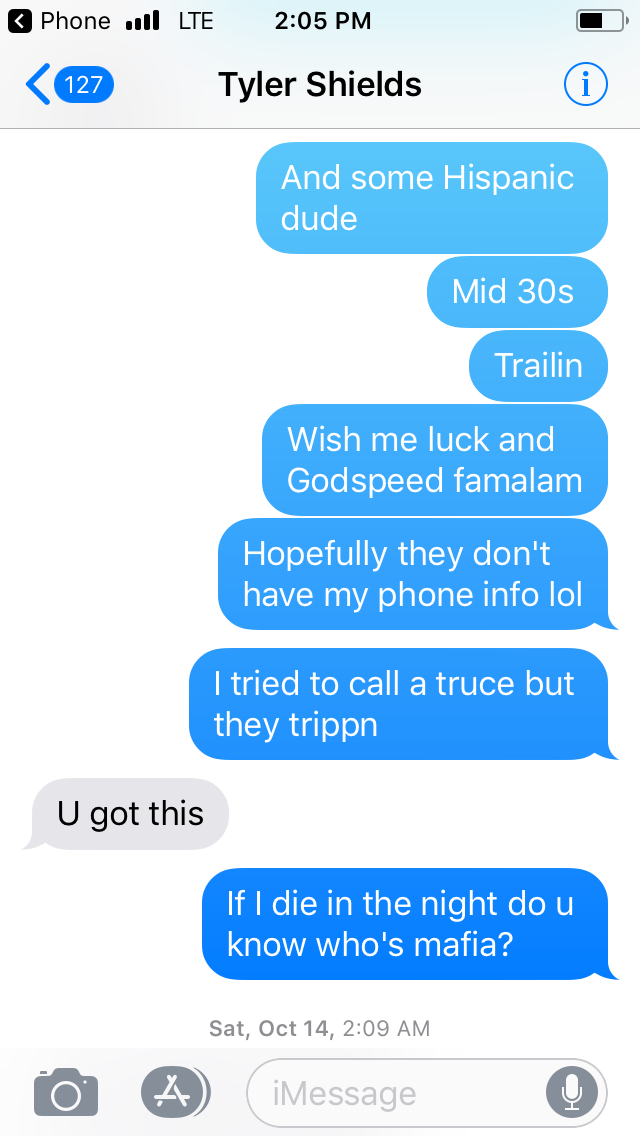 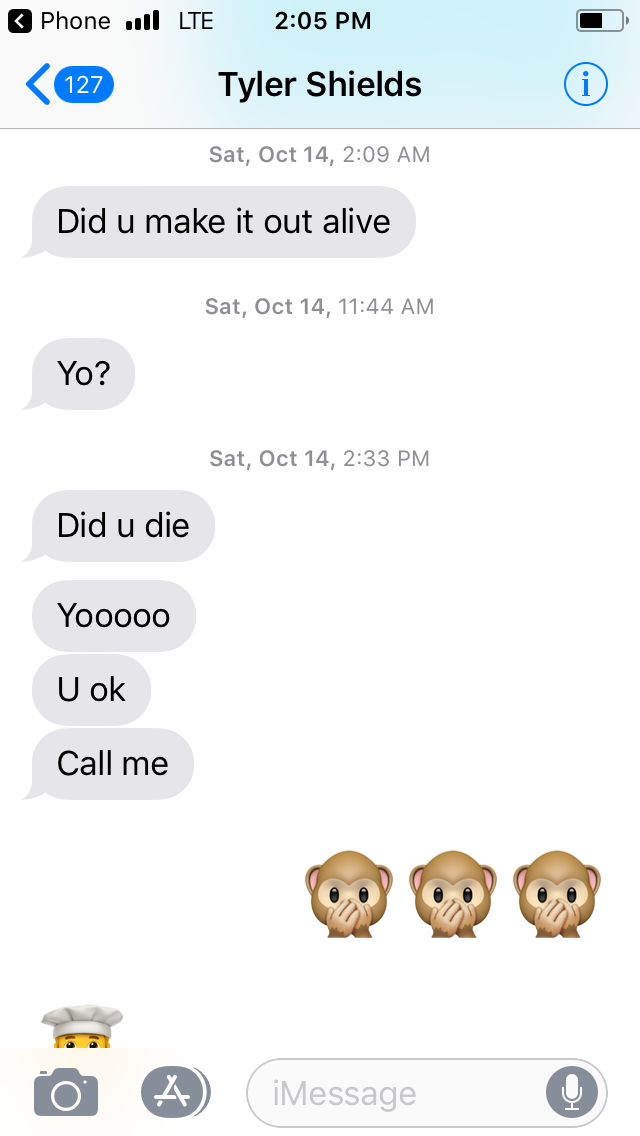 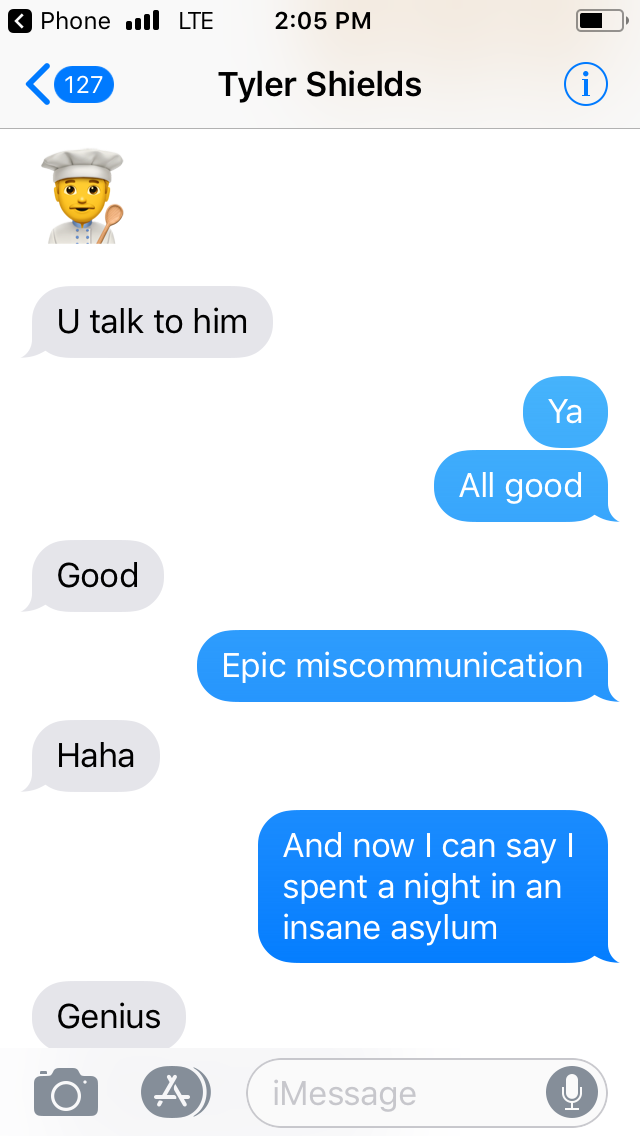 UPDATE: I’ve been corrected. This is just Kappy having some fun with his drops. He DID post this, and confirmed it at the end of his Periscope broadcast, which is linked below.

He also kept tweeting during all of this: 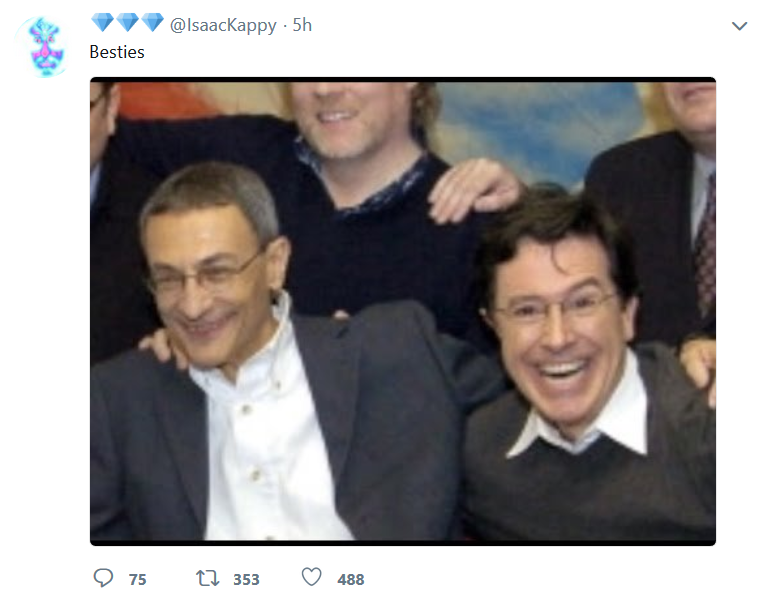 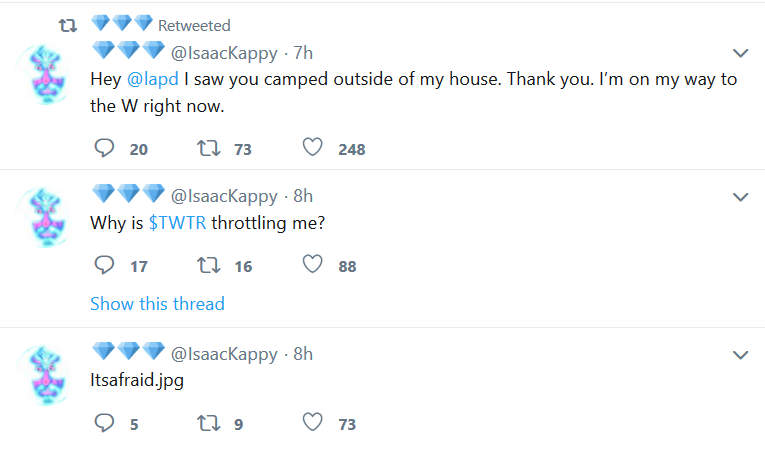 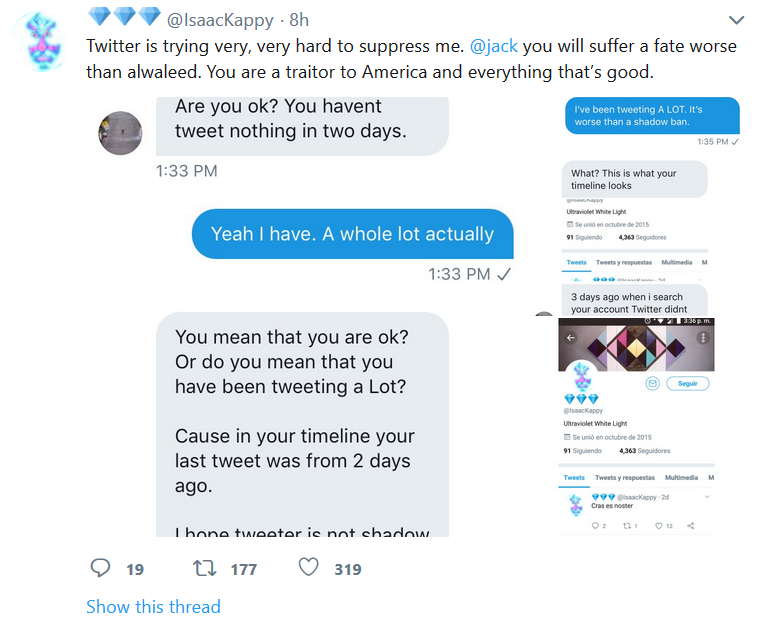 And he also made a Periscope broadcast, which I suggest you spend some time with, because he not only verifies what #Renegade was saying (and asks him to come out), but names some serious names.

All I can say to what Kappy is doing is this: