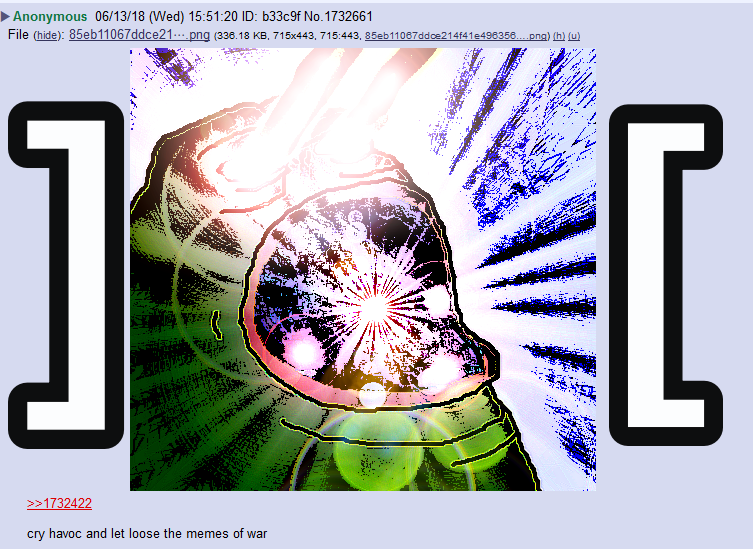 Site problems still abound. I think I’ve figured out some workarounds for the time being, but we’ll see.

If you get a 403 error – give the site five or ten minutes. It should come back online for you.  I’m working on figuring out exactly what’s causing that still, but it’s a lot of trial and error, with a loooot of different variables involved. As long as I can keep writing, and keep publishing, I’m happy.

Okay, let’s get into #QAnon: 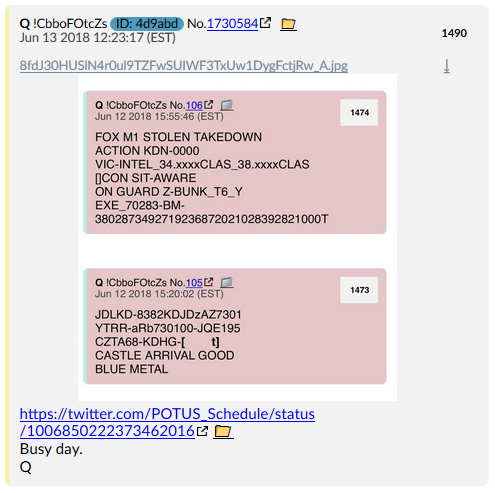 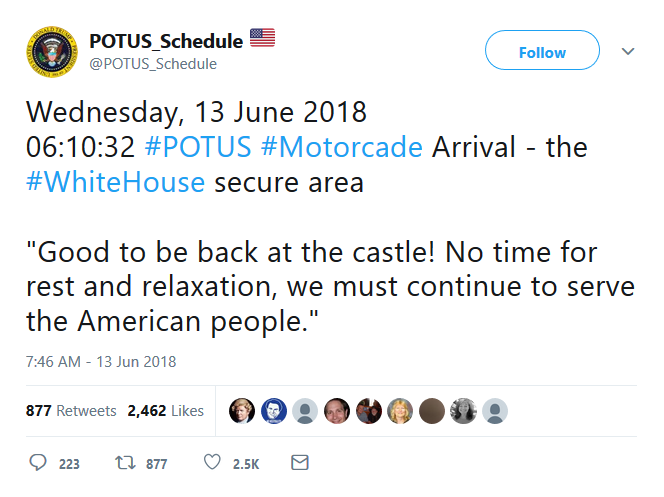 POTUS is back in CONUS, at the White House, and hard at work! In faaaaact: 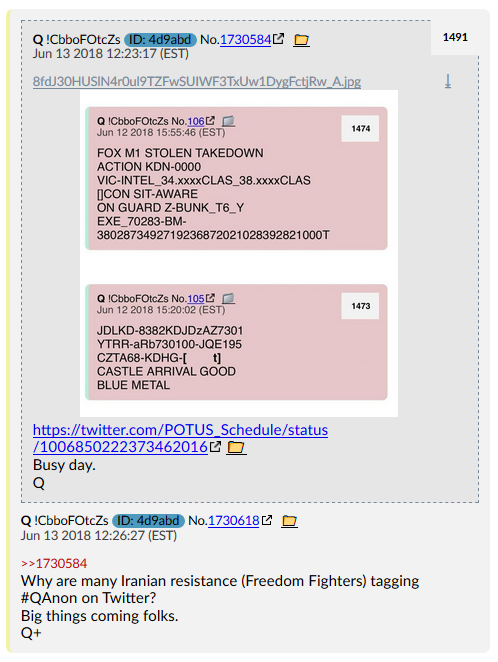 This sounds like Trump talking directly to us, again. After all, it’s Q+. 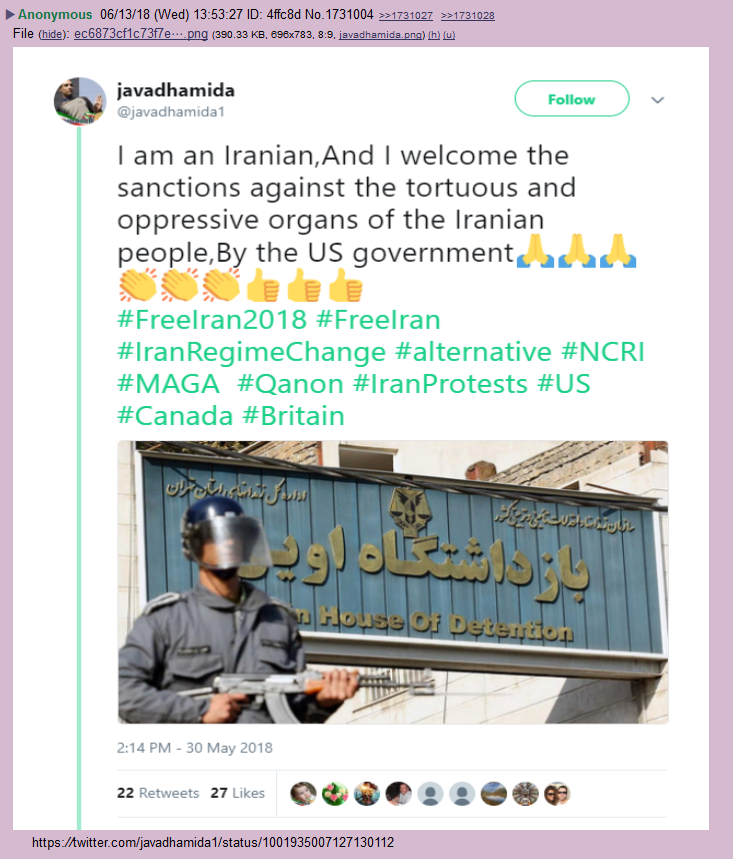 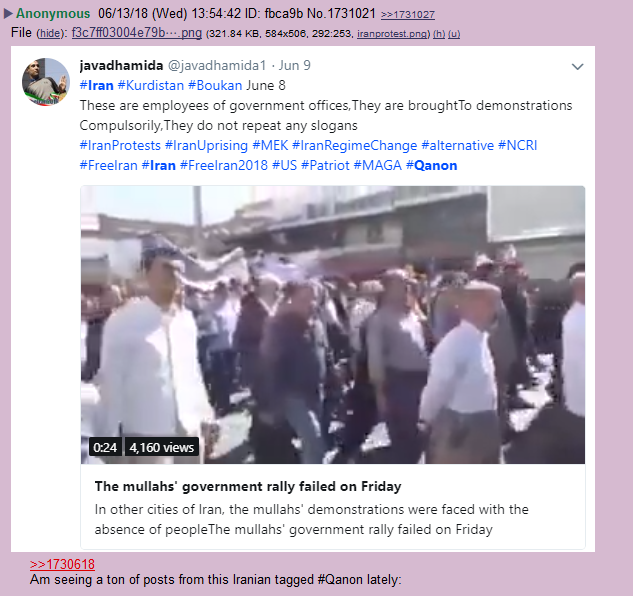 One Anon notes the “23” reference, on the image of the man being hung: 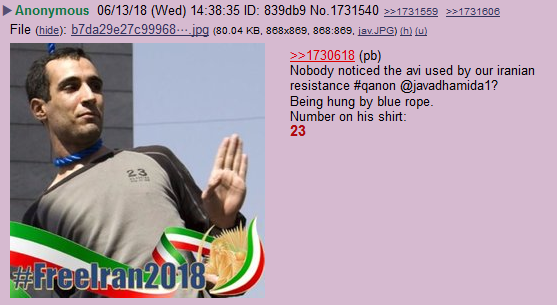 So, I wouldn’t be surprised if the Iran issue is resolved very, very soon. 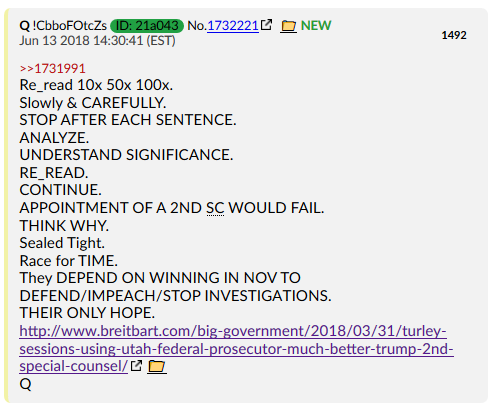 Q answered a really stupid anon here, for some reason.

I’m not joking. Get a load of the stupidity Q is responding to here:

Shame on you, #Anon! That’s what you say after all this time?

But we’ve been through this article multiple times, so I don’t know what Q is trying to get at by showing it to us yet again. Huber is Grand Inquisitor. He has everything. There will be no second Special Counsel. The indictments are already in place, and aren’t leaking. This will all unfold before Midterm elections, because they are not going to get a chance to impeach Trump, or otherwise block him legislatively. The media are pushing for a 2nd Special Counsel because they want to disrupt and delay, by forcing Republicans to start from the ground up – essentially erasing all of Huber’s hard work.

If there’s something else here that I’m missing – because this is the third or fourth time Q has posted this link – let me know in the comments below.

But because this is their only hope, #TheCabal is pulling out all the stops right now. We’re seeing massive censorship, botnets deployed across the internet, the media going into overdrive, and literal missile launches.

The ultimate takeaway, I think, is this: 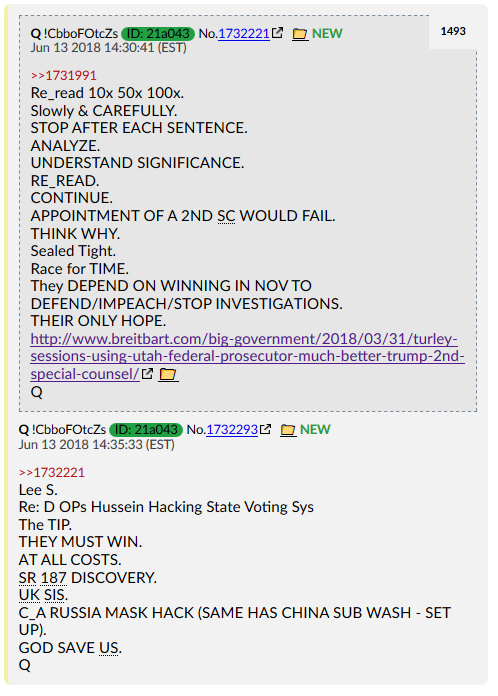 Q is referencing the tweets by Lee Stranahan, who go the important tip: 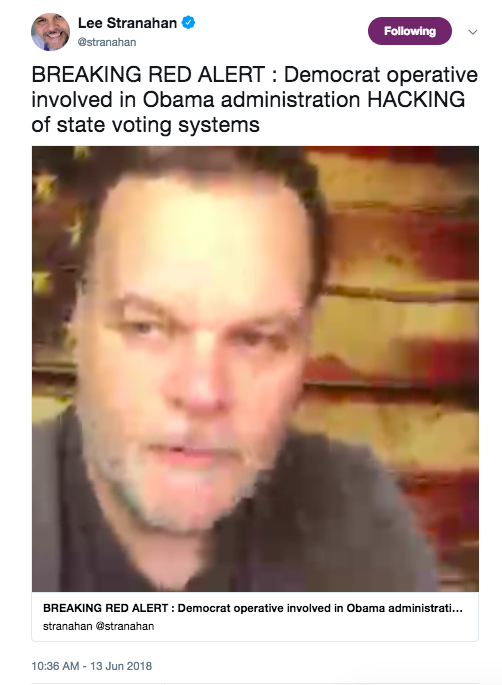 In the video, he talks about how the Obama Administration was working with a SERIAL BOMBER to hack elections in multiple states.

Likewise, the Obama administration, the Obama DOJ and the Dept. of Homeland Security were working with an Anonymous-connected hacking group called the “The Protectors.” 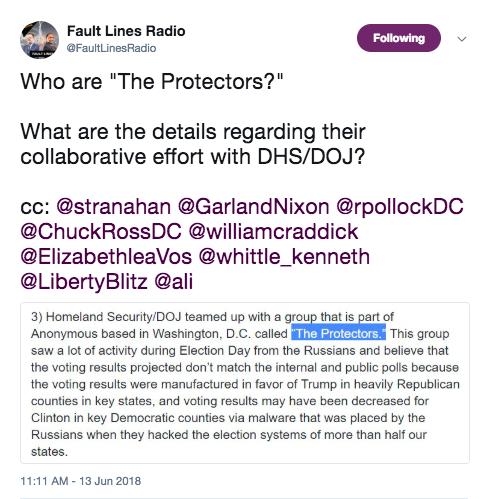 “Coincidentally,” he started getting attacked by bots, shortly thereafter: 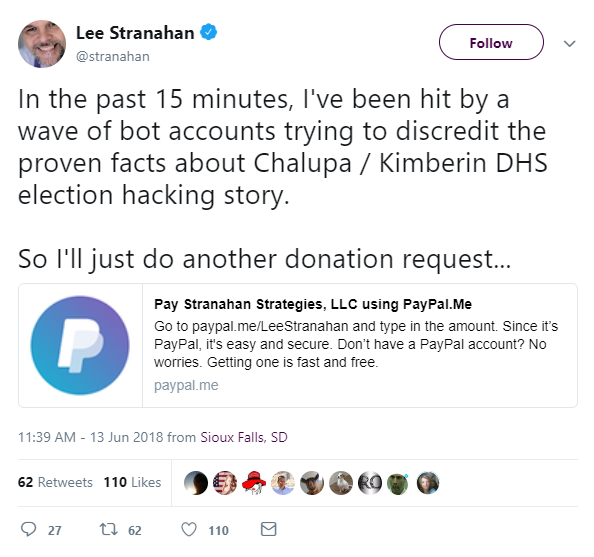 Here’s the article he cites in his video:

Indiana Secretary of State Connie Lawson, the incoming president of the association, told TheDCNF Tuesday that, “we know that between November 1 and December 16 we were scanned with about 14,800 scans, nearly 15,000 different times.”

The state’s IT team traced the intruder to a DHS computer’s IP address. The same DHS unit attempted 10 times in 2016 to hack into the Georgia electoral system.

We went over this, I believe a day or two ago, but discovery is a legal phase that allows both sides to gather evidence from other parties, through, for instance, the use of court-ordered subpoenas. This was the link I posted related to that, I believe: 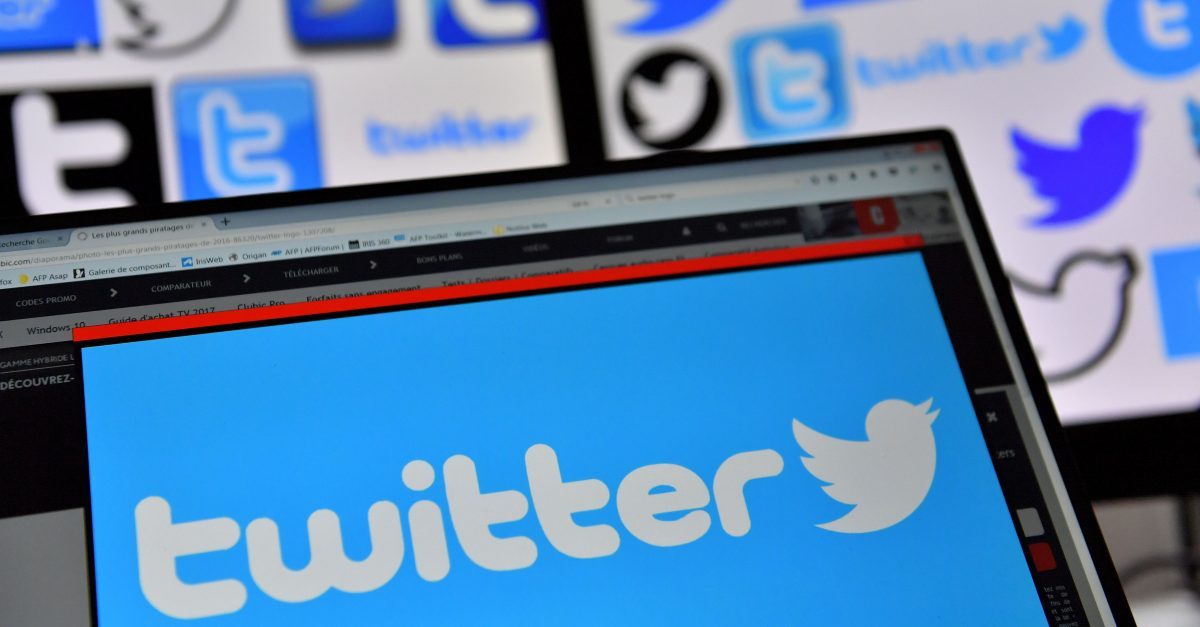 The defamation lawsuit filed in March by Aaron Rich, the brother of murdered former Democratic National Committee staffer Seth Rich, appears to have ramped up significantly with the subpoena of several Twitter accounts including private messages sent over for the timespan of Jan. 1, 2015 to the present.

Leftists didn’t realize what this meant until too late, however, because it will reveal that Seth Rich was in contact with Wikileaks, and was, in fact the leaker – so now they’re shrieking about privacy laws and such. It’s all a sham to prevent the good guys from obtaining evidence. 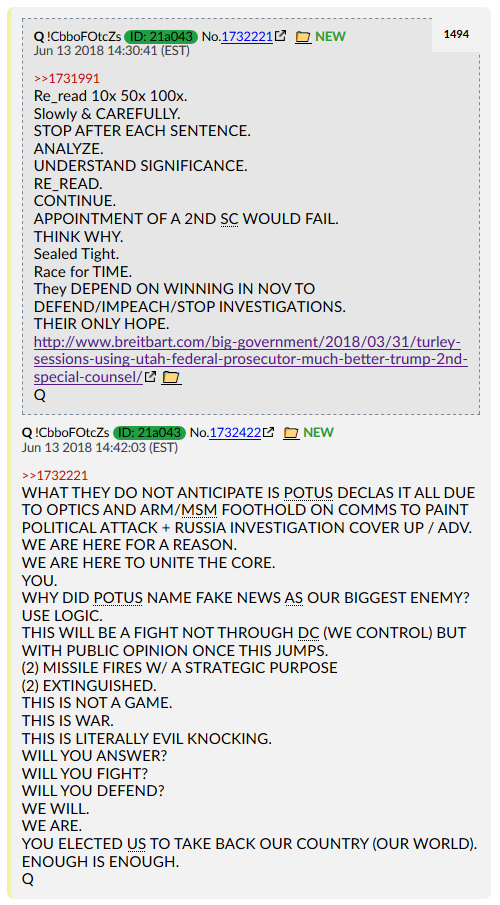 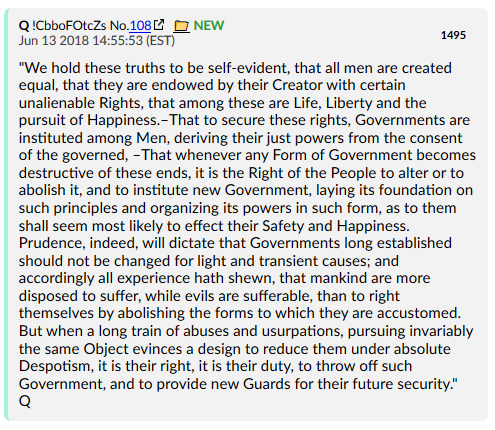 Many have wondered why Trump doesn’t just send out the military, start arresting these evildoers, and executing them where they stand. One of the Cabal’s explicit goals was always to destroy the nation and create chaos. If Trump became a sort of military dictator and just went on a unilateral purge, it would create chaos, which would cause destruction, and inadvertently end up accomplishing one of the Cabal’s goals for them, even as they were being executed.

So what Trump has to do is launch a total narrative reversal on them; systematically expose the evil as they attempt to lie, confuse, and slander, and get a critical mass of people on-board with his plan to #MAGA. There’s literally no other way to make this happen.

This movement is about THE PEOPLE, and carrying out the will of THE PEOPLE.

We still have a lot of good people in America; they just need the better information, so they can make better decisions, and have better opinions.

Which is why we’re here.