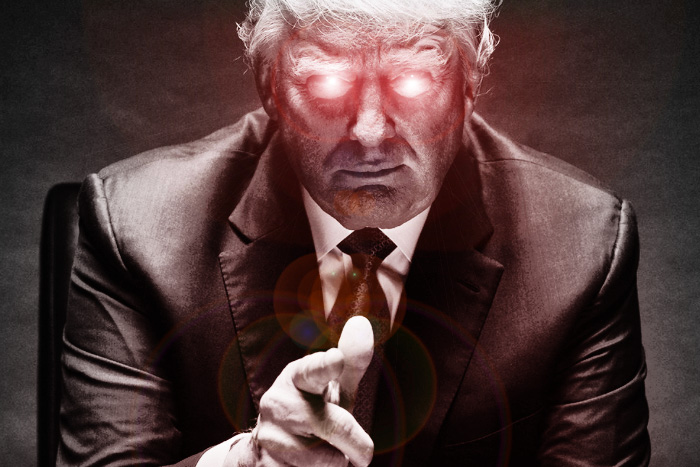 That’s right, it’s Q! It’s been his longest real absence yet (save for one post in the middle of it, just to let us know that, yes, he’s still there). And boy, did he bring the goods tonight! 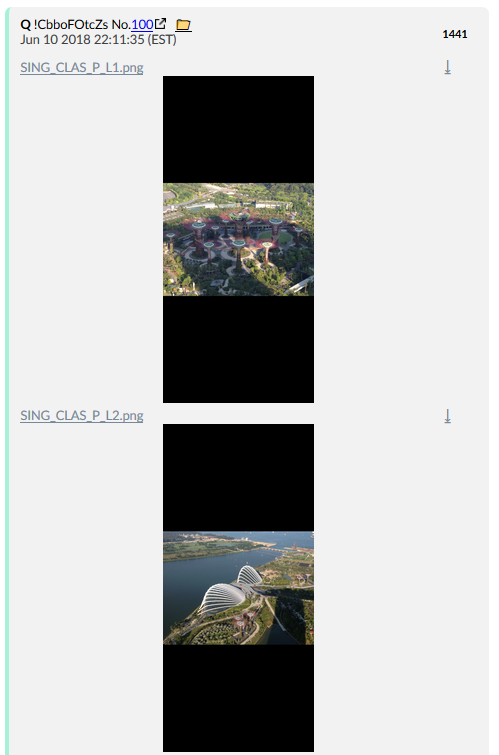 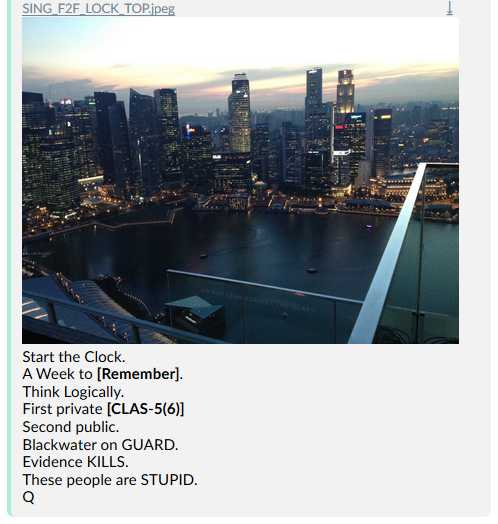 Pics will come in a sec, but I really want to dig in to this.

Q gives us a signal to start the clock. I think this is an obvious  reference to Trump and Kim Jong-Un’s peace summit meeting, while simultaneously calling out the #QClock as valid. If that’s the case, just know we are at :05 on the QClock.

I went back through the older :05 drops tonight, using EvilWulf’s QClock program, but I don’t see any immediate relevance to tonight’s drops. Still, if you want to give that program a shot, you can grab it here:

But more importantly, I think Q is telling us that this week, starting on the 11th, is the week to Remember, from his last Q drop:

If I had to venture a guess as to what the four booms were:

The suicides were extra.

Anyway, those stories all look pretty boomy to me.

As for [remember] being in the killbox… I had to stop for a second and go, “Wait, is ‘Remember’ a marker?” And then I asked, “Is ‘Remember’ a code-name?” I even went back and read through every instance of the word “remember” in Q’s previous drops, but where I landed is this:

As a people. as a nation – even globally – we all have memories of past events. There’s a narrative playing inside the majority of the minds in the world. Even if they don’t necessarily agree with that narrative. they understand it, and they understand that the rest of the world lives by it.

What I think Q is saying here is that this week will literally shatter the minds of the world. It’s like when you’re watching a movie (and remember, Q says we are watching a movie), and suddenly a plot twist kicks in, and it forces you to reframe EVERYTHING you had seen up until that point. Suddenly, you have to go back and rethink every scene you just watched, because… how could you have missed it?!

Remember the first time you watched The Sixth Sense? And then that moment came? (Don’t worry; I won’t spoil it for the remaining three of you on the planet who haven’t seen it by now – and really, you should). But that twist in the story came, and suddenly, you found yourself so far behind the narrative; the story was so far ahead of you, that you almost felt dizzy and lost; like your brain just couldn’t keep up.

I believe what Q is saying is that a a twist like that is coming, but on such a scale and magnitude that it will rock the world and send the population reeling for years to come.

But what could cause such a dramatic turn so quickly? Hmmm…. 🤔🤔🤔🤔🤔 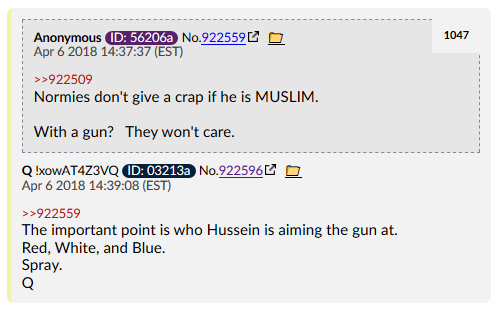 Let’s see if I’m right about this.

As for the latter half of Q’s drop:

This one is public.

Blackwater is guarding… someone.  Many immediately thought Trump, but Q denied it later.

#Anon had a thought about that:

Not a bad thought.

As for the pics: 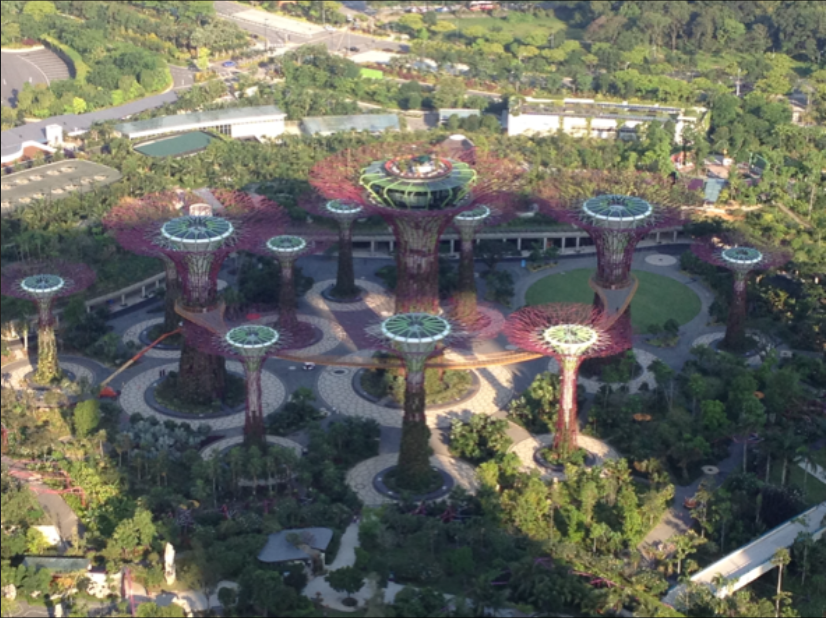 First up up are the so-called “supertrees” at the “Gardens by the Bay” in Singapore. 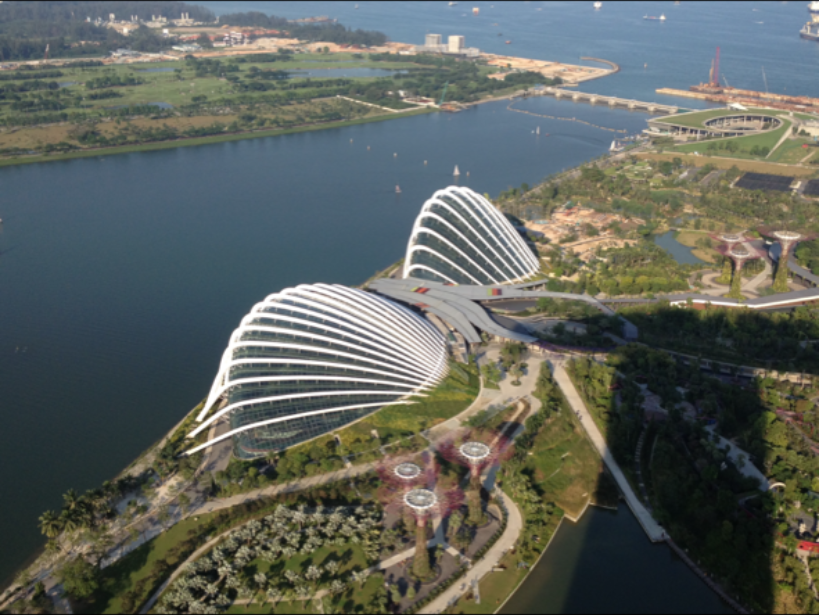 And this is the another part of that same complex; you can see the same “trees” there, next to the domes.

Both these pics, judging by the ominous T-shaped shadow, show that they were taken from atop the Marina Bay Sands Hotel. There really isn’t any alternative in the area, in terms of vantage point: 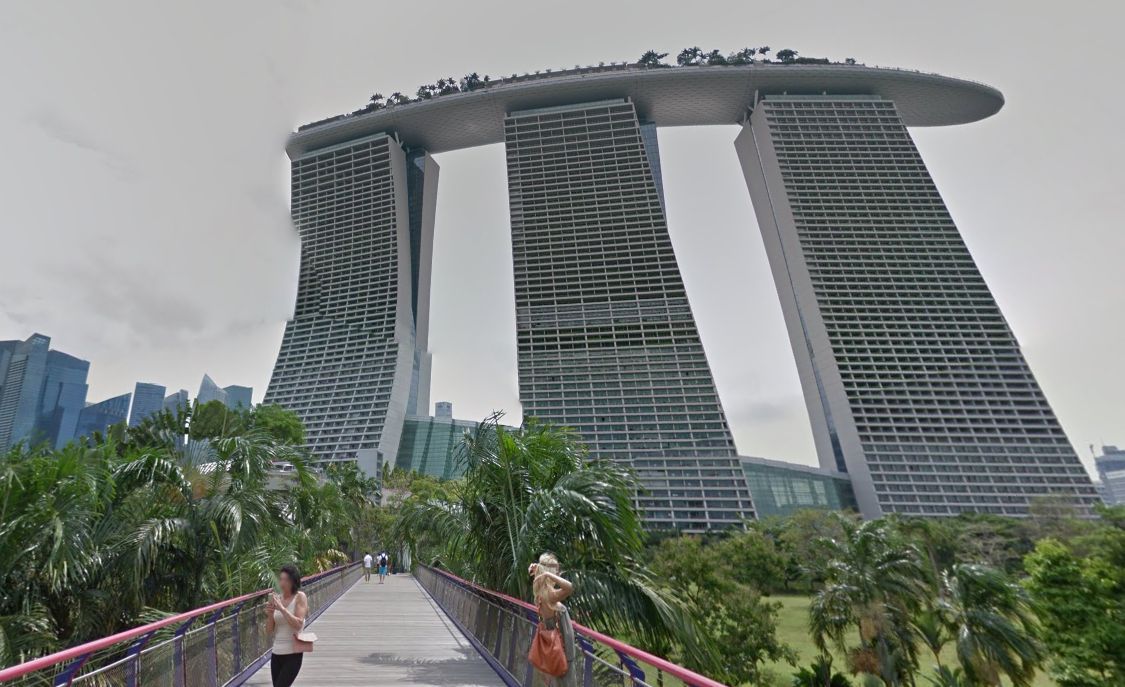 As for who took these photos… well…

I’m gonna jump ahead and spoil this for you:

Whoooooaaaahhhhh. #Anon helps explain, in case you didn’t catch it yet:

Okay, the last pic in this drop: 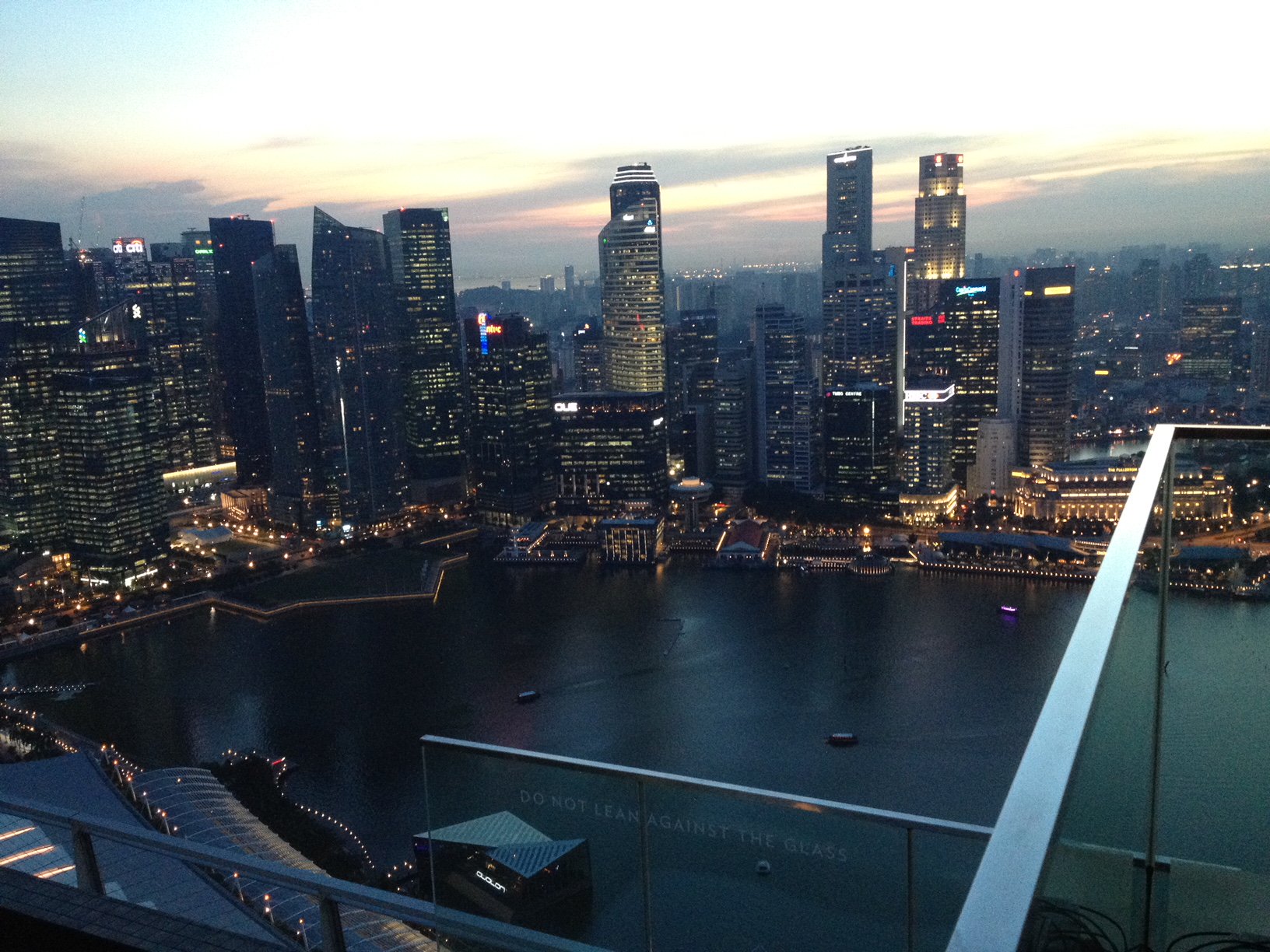 Then note the etching on the glass: “DO NOT LEAN AGAINST THE GLASS.”

And one Anon couldn’t help but wonder: 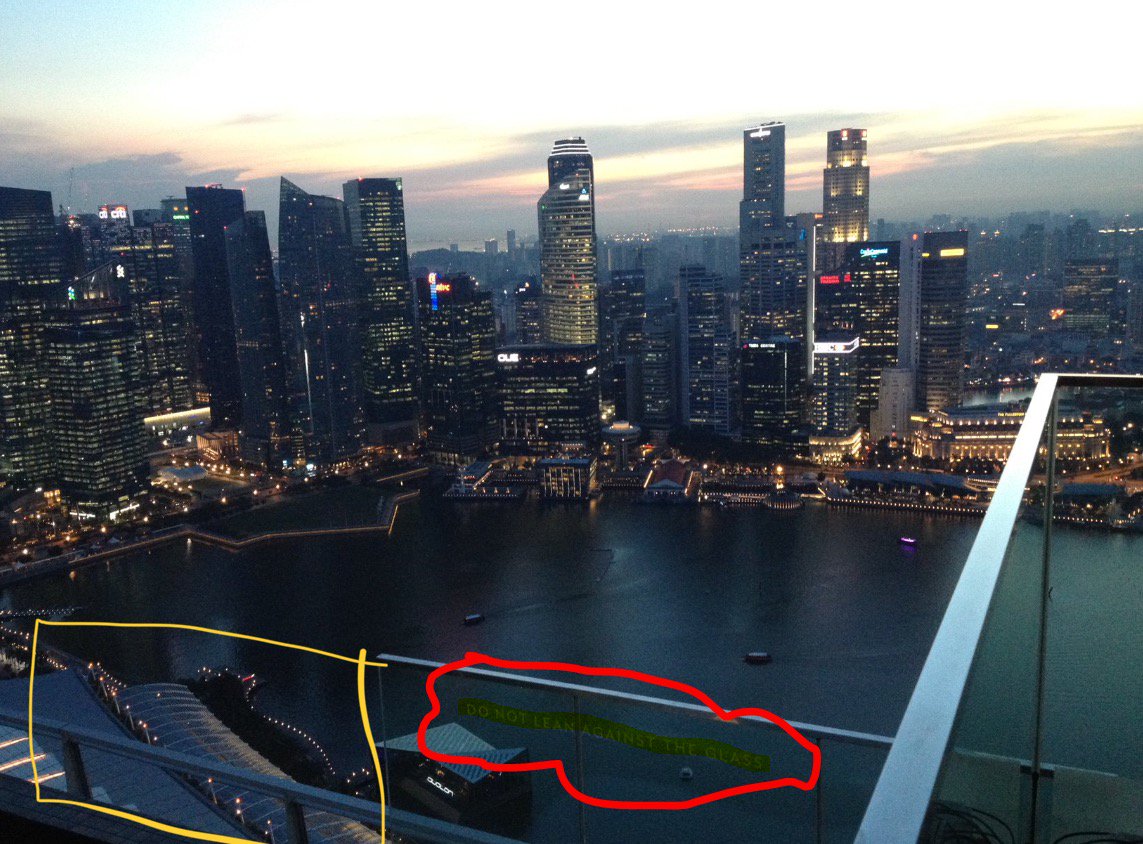 Of course, you all realize what this means.

Q has dropped very blatant hints for months about this meeting. Trump has talked it up for a very long time. They’ve telegraphed when Q has already told us:

Except he seemingly has been, for months. 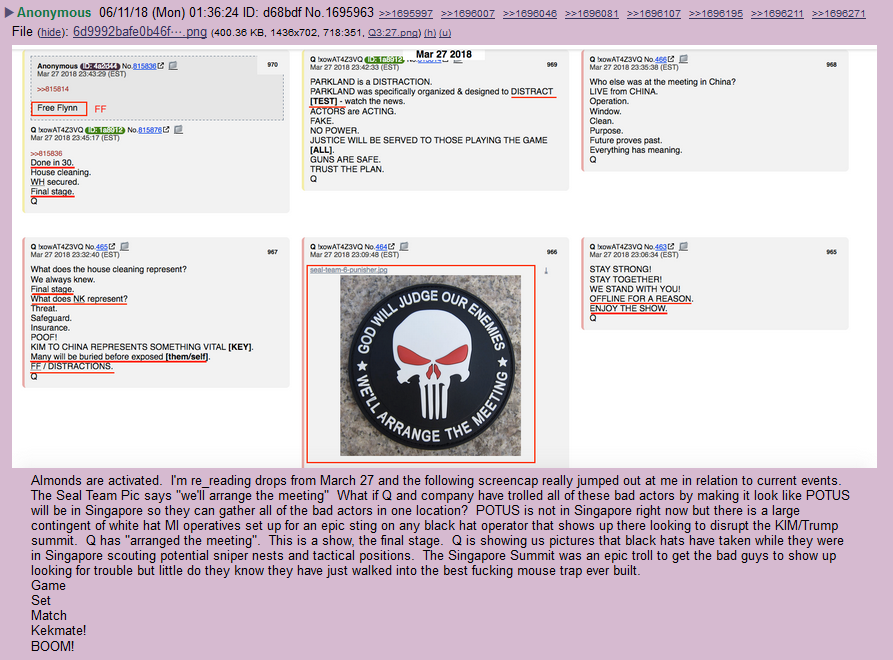 Anon thanks Erik Prince for guarding POTUS… But Q clarifies:

Huh… so who is Erik Prince guarding then?

I know I mentioned it in passing on Gab, but… when you re-read older Q drops, it looks like QTeam may have extracted Julian Assange on Christmas. 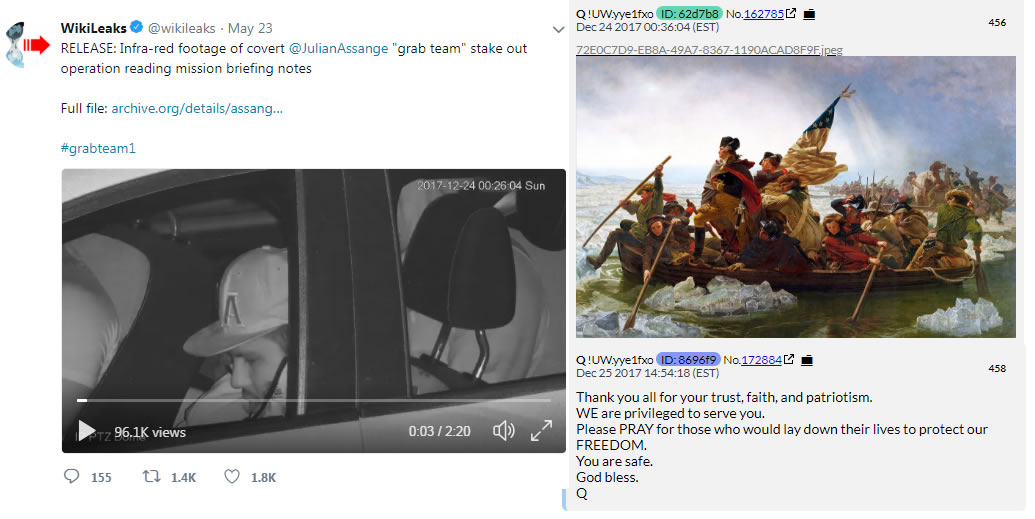 Don’t be surprised if Assange suddenly appears out of nowhere in all this. Know that it’s been in the works for a long time. 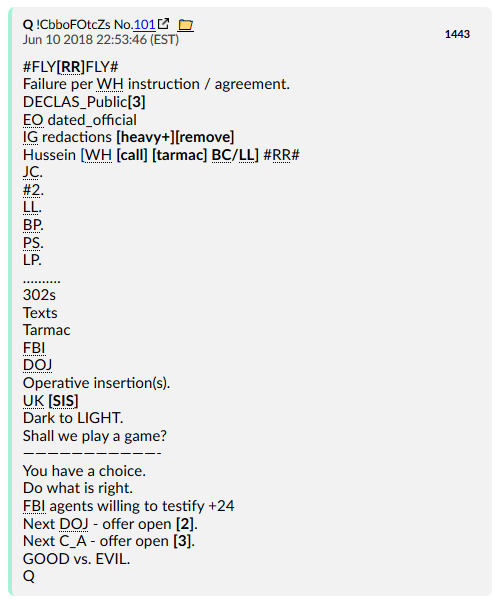 Now this… This is a spicy drop.

Looks like Rosenstein is a black hat after all! I had gone back and forth for a while on the issue, but it looks like Q is saying he’s reneging on a previous agreement he had with the White House. Not good! Time to get rid of him!

WHEW! Catch all that? Rosenstein was in on the Tarmac meeting! POTUS gave him the chance of a lifetime, and now, well… Looks like he’ll be going to jail with the rest of them. How stupid! 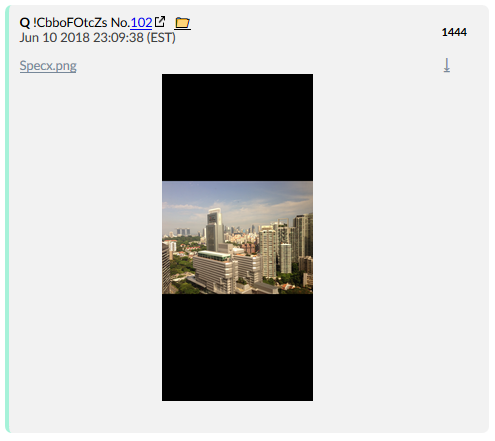 As for this show, entitled Specx… frankly, no one has any idea what this is all about yet.

Some anons pointed to the specks in the sky, as evidence of drone activity, but it just looks like a dirty window to me. 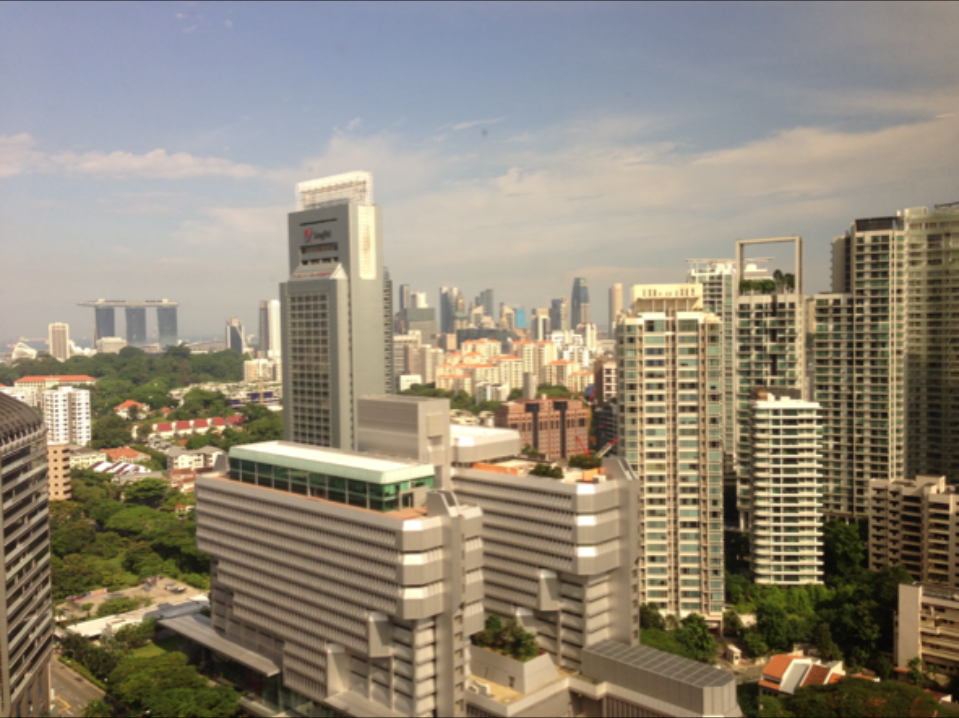 I’ll update this article here if anything develops on this point. 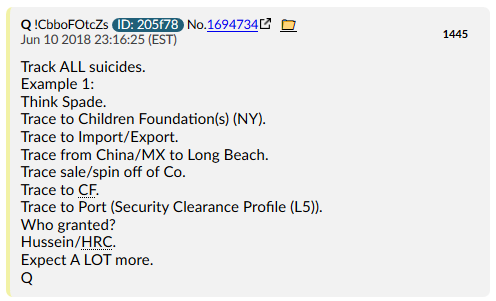 Oh, and look at this! Q verifies that the Kate Spade suicide wasn’t just a normal suicide!

And he gave very specific instructions on how to link this one back to the Clinton Foundation!

Anons immediately started digging, but there are more connections yet to be made! 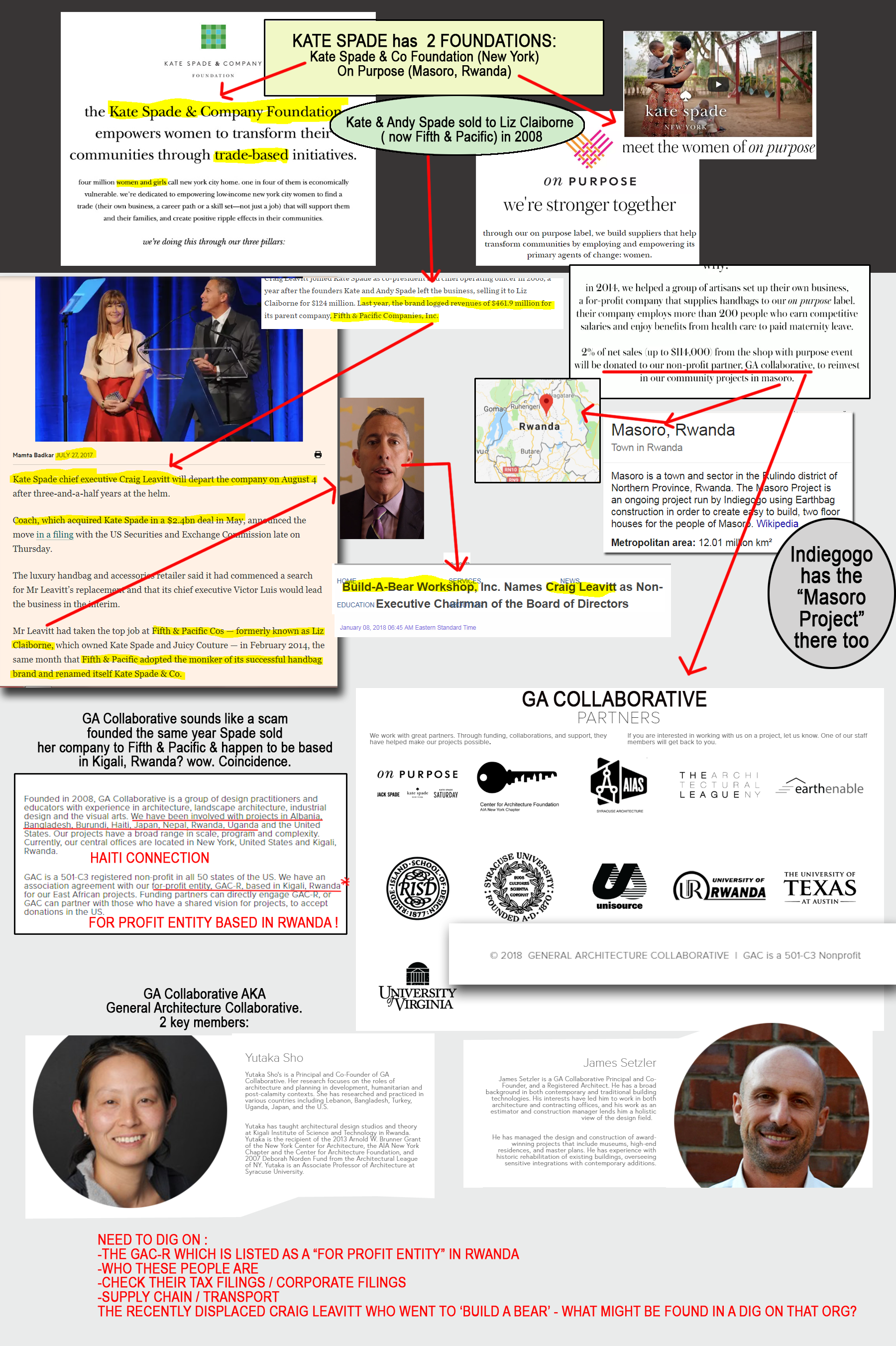 This we already went over, above.

Looks like this really is the last chance for #TheCabal to mount any kind of serious counter-attack – and I hope they are foiled at every turn.. But no doubt they’ll be pulling out all the stops. But QTeam was smart. They waited until school was out, nationwide, so there would be no more school shootings. They started this on a Monday, so there would be no church shootings. They strategically planned this to give Cabal operators as few “easy” options as possible, and make their evil task as insurmountable as they could make it.

Personally, I would avoid mass transit and population centers this week.

We are about to experience a real turning point in the history of the world, guys. There’s going to be a real delineation between the period before these upcoming events, and the period after.

Like B.C. transitioning to A.D. – the difference will be (almost) as profound.

I, for one, am looking forward to our future.

44 thoughts on “A Week to Remember! #NEWQ #QAnon #GreatAwakening”