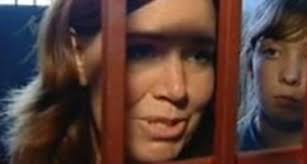 Major developing lead on the boards right now! I’m going to assume you know some basics about #Haiti and the things #QAnon has posted about it, previously and dive right in.

Key players you need to know:

The Clintons (and the Clinton Foundation).
Podesta
Laura Silsby
(and the new ones we’ll go over as we encounter them).

If you don’t, for whatever reason, have an understanding of what the Clintons did (or attempted to do) with Haiti, catch up with these two Qposts at the very least: 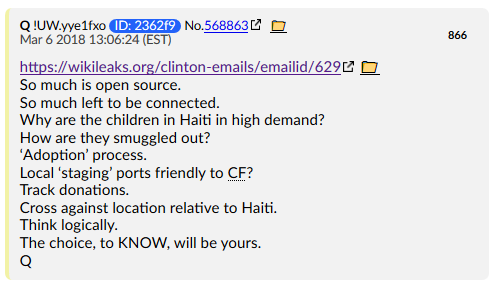 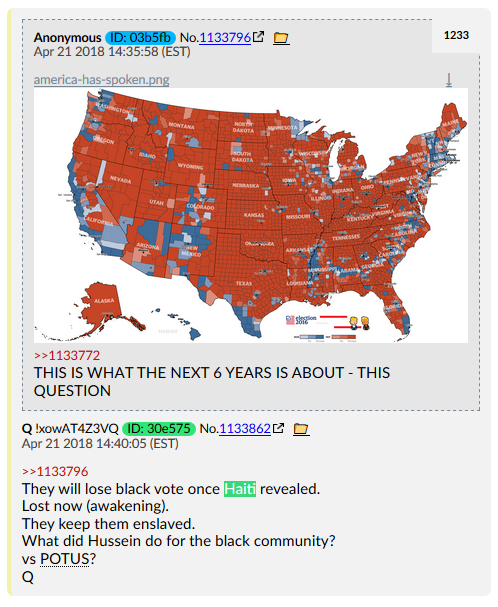 The main gist of it is that Haiti is prime ground for child trafficking. Most of the human sacrifices, and many sexual abuse victims came from Haiti. On top of that, the Clintons stole aid that was donated for Haitian relief in the wake of the big quake they had there a few years back…

And used it to finance Chelsea’s lavish wedding.

We’re really hitting the ground running here tonight, because we’ve got a lot of ground to cover, so let’s get into it, starting with this:

A #HelperAnon dropped this tonight: 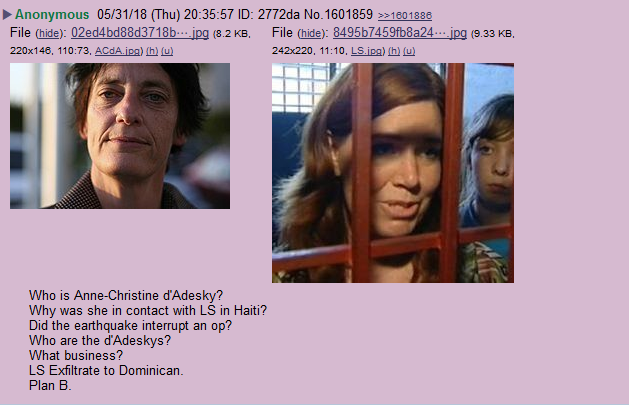 But something odd and kind of funny happened.

No one paid attention.

At least… not at first.

So, someone – it may have been the same Helper or another #Anon – tried again.

God bless ’em, because this time, it worked!

And let’s get into some of the questions here, following anons as we pick apart this puzzle.

First question: Who is d’Adesky?

Turns out she’s a Degenerate Lesbian who worked for “Out” magazine, then an HIV magazine, and also as a “foreign corresponded” for several papers in… Haiti… where she had familial roots. 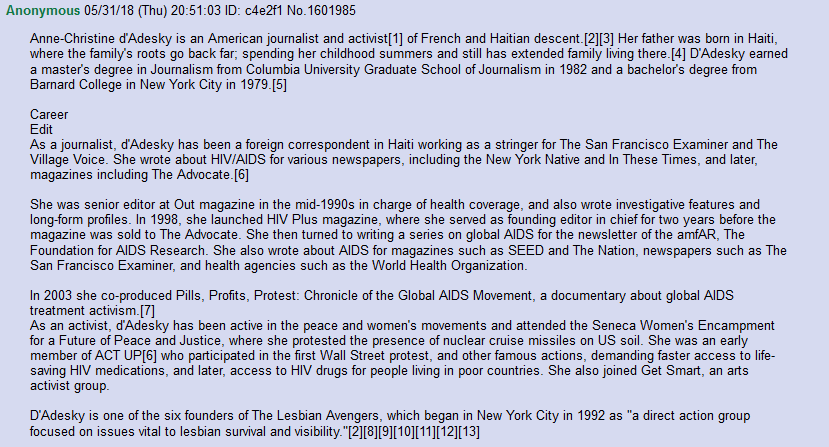 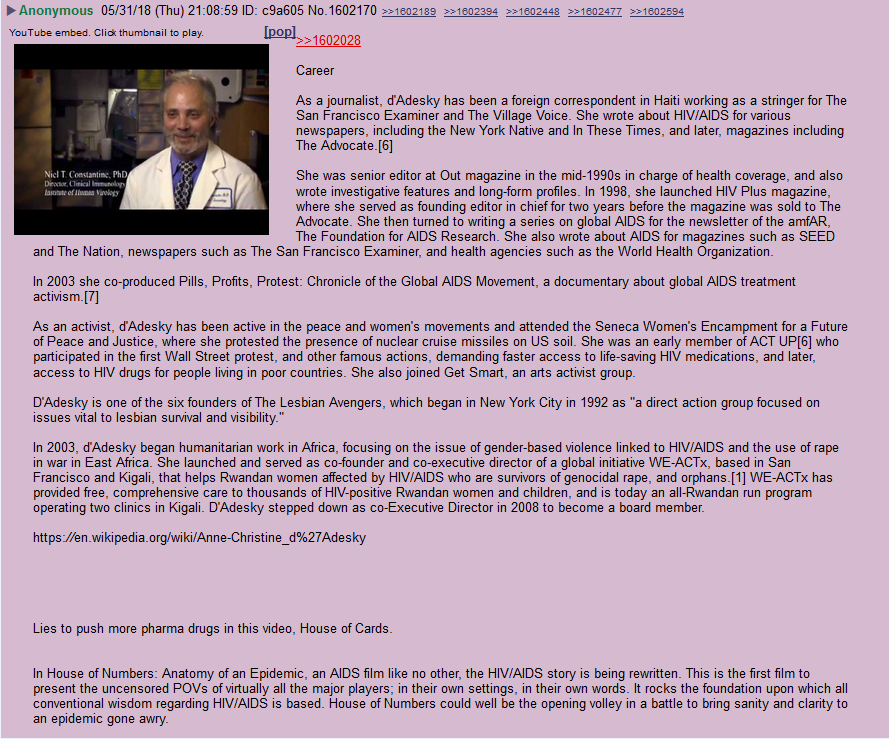 So she tends to work in very poor areas, has ties to Haiti, and tries to advance the agenda of the “#PurpleMafia” everywhere she goes.

Now… remember. Silsby is a convicted child-trafficker who worked with the Clinton Foundation:

ZeroHedge - On a long enough timeline, the survival rate for everyone drops to zero

I will add here that she now works for the service that issues Amber Alerts, under the name Laura Gayler, despite her previous conviction.

THIS IS NOT A DRILL FOLKS! The National Center for Missing and Exploited Children IS RUN BY CHILDREN KIDNAPPERS AND CHILDREN EXPLOITERS! NOT A DRILL! from The_Donald

But as to their meeting, d’Adesky is actually quoted in this article: 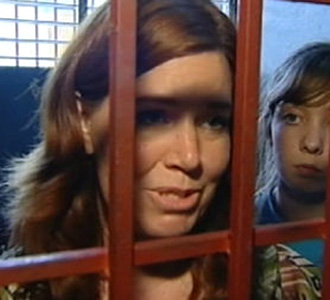 Ten missionaries are in jail in Haiti, accused of kidnapping 33 children--but the U.S. media has stopped just short of portraying them as victims.

In a letter to the United Nations, Anne-Christine d’Adesky, a writer and human rights activist, said she met with Silsby on January 24 in a hotel in the Dominican Republic. Silsby allegedly told d’Adesky that her authorization to pick up Haitian orphans and bring them into the Dominican Republic came from an unnamed Dominican official.

“I informed her that this would be regarded as illegal, even with some ‘Dominican’ minister authorizing, since the children are Haitian,” d’Adesky wrote, adding that she directed Silsby to UN agencies dealing with orphans and adoptions in the country.

D’Adesky told the Wall Street Journal that Silsby responded: “We have been sent by the Lord to rescue these children, and if it’s in the Lord’s plan, we will be successful.”

Oh-ho-ho – so now Silsby is a “Christian Missionary,” doing the Lord’s work…

By… trafficking children in the wake of an earthquake…

…not orphans, mind you, but children with parents who still wanted them…

…and through the Dominican Republic…

Oooooh sure! d’Adesky is the character-witness here!

The same d’Adesky- remember – who is a die-hard, uber-leftist Lesbian – the same one who is a founding member of “The Lesbian Avengers – she’s the one who is vouching for the “Christian” character and dedication of Laura Silsby here.

And the purpose of their meeting just happened to be to warn Silsby that, hey, maybe moving a horde of children through the Domincan Republic – and gathering up to 100 more along the way (as the article attests) – is illegal.

Why, they’re just two peas in a pod!

One problem with that story, though. One teensie-weensie, itsy-bitsy problem! 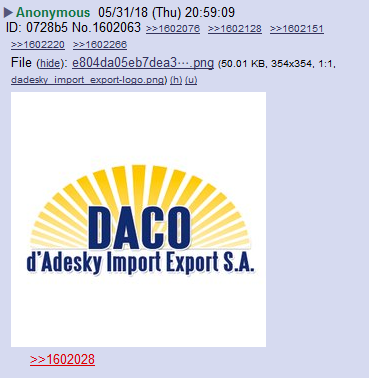 d’Adesky’s family owns one of the biggest shipping companies in Haiti. 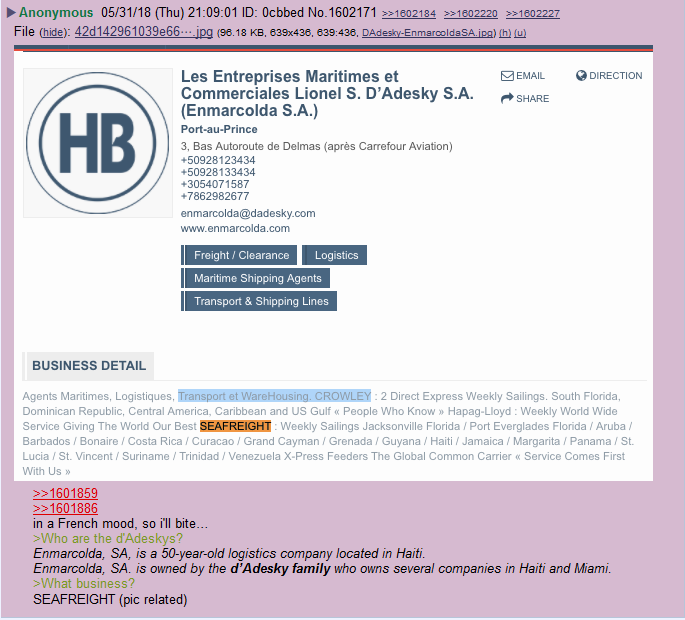 So let’s think for a moment here.

Silsby is looking to illegally move a lot of people out of the country.

And d’Adesky has access to a shipping and freight company. 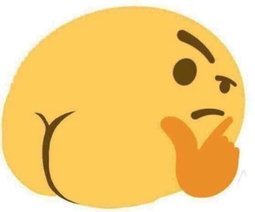 Hey, as a brief side-note, did you remember Jeff Kasky? The father of #Parkland shooting “survivor” Cameron Kasky?

Remember the write-ups I did about his “adoption agencies” in Florida?

Oh yeah, there’s a major connection between Silsby and Kasky that’s since been uncovered: 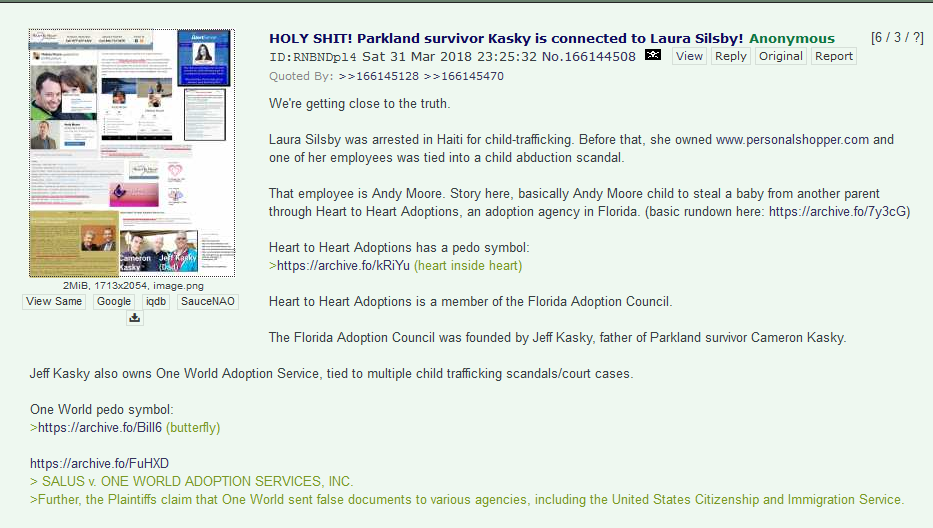 Andy tried to “steal” a kid from Kasky.

Uh-huh. Just a total coincidence, especially considering all we uncovered about Kasky and how he had to shut down due to corruption charges.

Here’s the infographic that the anon above made. And I realize my site doesn’t scale things quite correctly at the moment, so I try to include links to the full-sized versions of the images when things get too big to scale – right underneath the image: 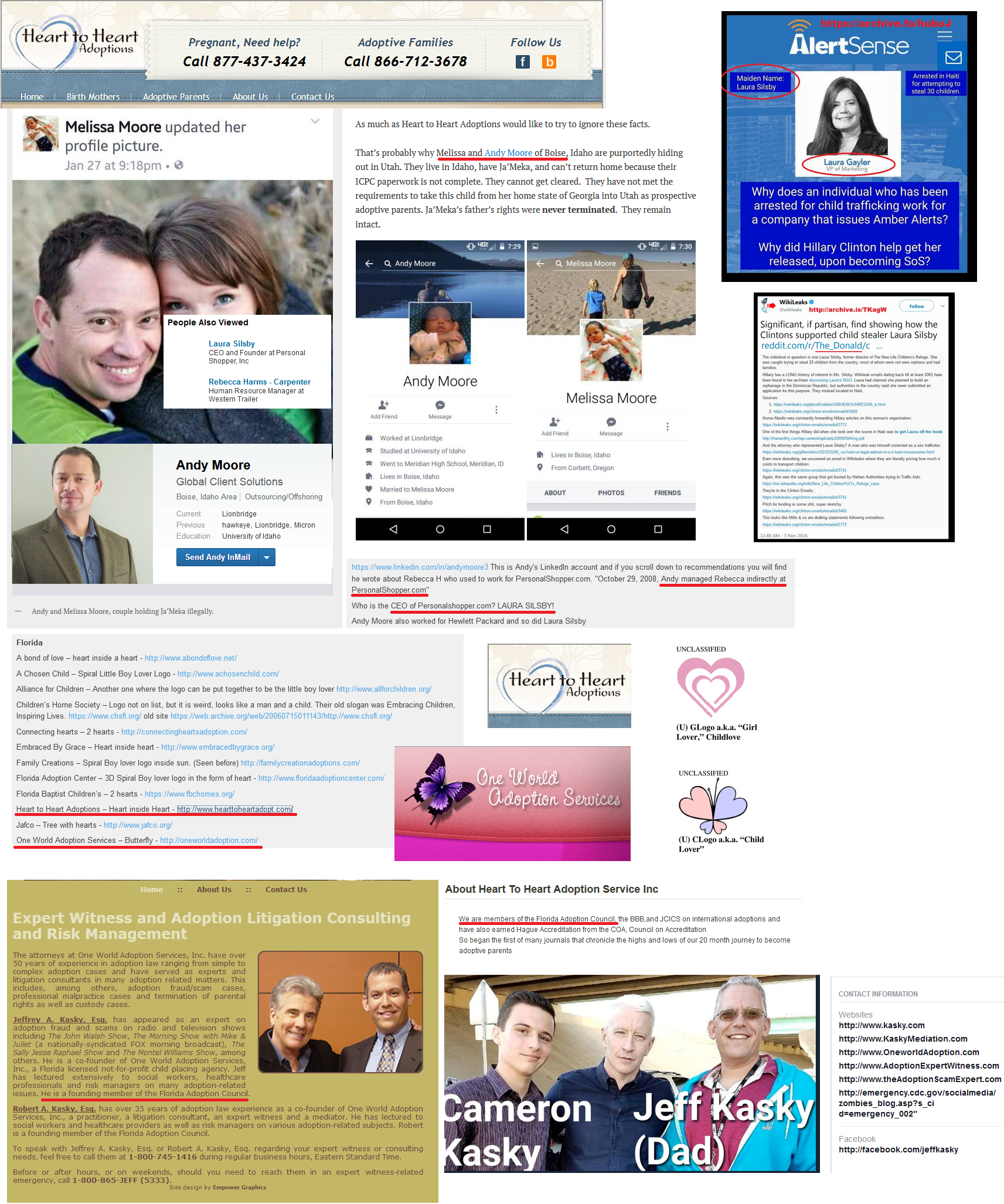 But to get back to the topic at hand, anon then asks the next logical question: 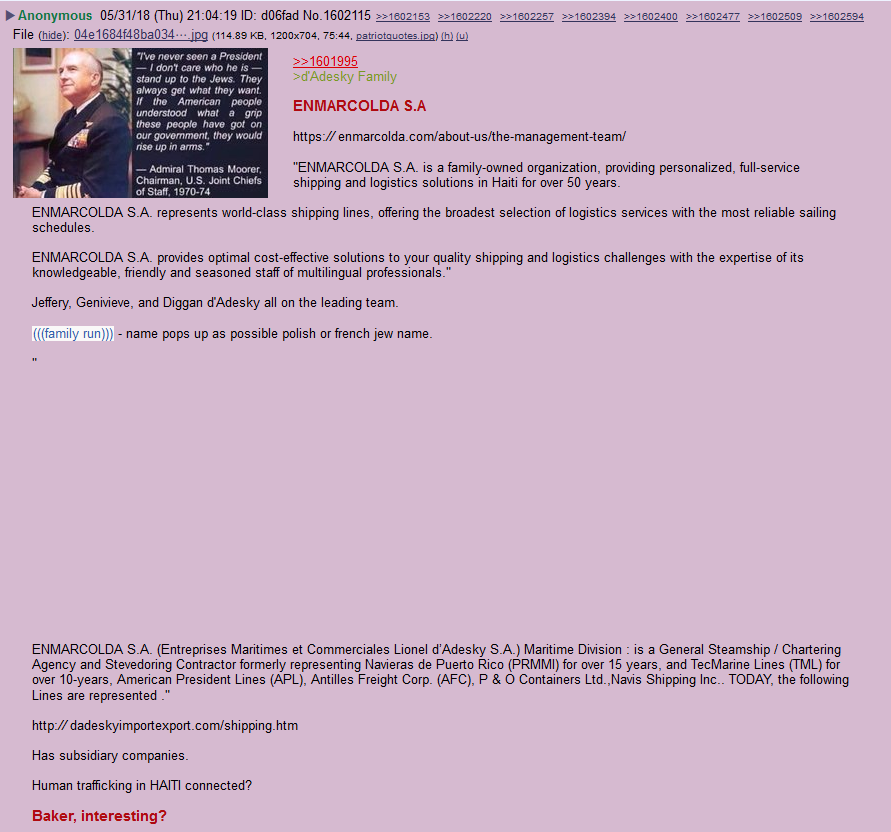 And second anon then comes back with this: 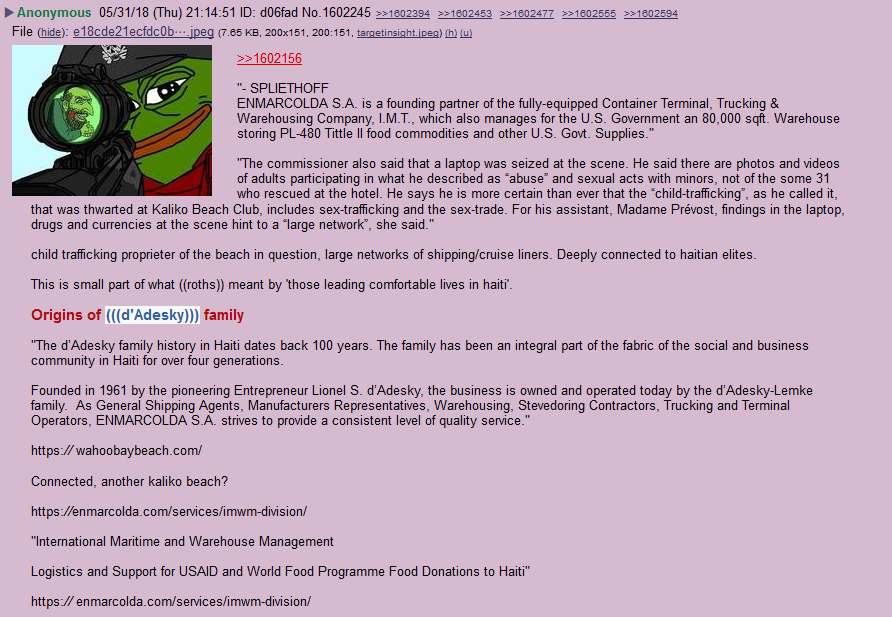 Now, I had to go looking for the article anon was quoting here, but I did find it – from a Haitian newspaper:

HOLD UP, GUYS – I think I just realized something the boards missed:

Mr. Leger also provided details on the sting in several interviews he held throughout the day. He says Room 158, where the adults were found, adjacent to Room 155 where the “33” girls were, substances resembling cocaine and marijuana were recovered. This is interesting because such drugs, especially cocaine, is not widely used in Haiti. It is not easily purchased in retail in non-producing third-world countries, like Haiti. Although such countries like Haiti are trafficking routes for narcotics to the U.S. and Canada, usage of the costly drugs are rare.

The commissioner also said that a laptop was seized at the scene. He said there are photos and videos of adults participating in what he described as “abuse” and sexual acts with minors, not of the some 31 who rescued at the hotel. He says he is more certain than ever that the “child-trafficking”, as he called it, that was thwarted at Kaliko Beach Club, includes sex-trafficking and the sex-trade. For his assistant, Madame Prévost, findings in the laptop, drugs and currencies at the scene hint to a “large network”, she said.

It was through the help of “missionaries” in Haiti that police were tipped off of the activities in December. Both Commissioner Leger and Inspector Desrosiers have confirmed this. They said that these foreignors were approached by individuals offering them minors. It was then that the investigation was launched.

33 children stolen. “Missionaries” with knowledge of this?

Oh, you mean EXACTLY like what was attempted in 2010 by Silsby??

I wish you could see my face right now…

Someone better post this “coincidence” on the boards as soon as I publish this.

Oh screw it. I’ll do it myself right now. This stuff is moving so fast:

One anon then posted a link to this article, which refers to the d’Adesky family as part of the MRE’s – the “Morally Repugnant Elites.”

Her face was twisted with rage, her voice cracked with fury, her body cramped with hate.

Paradoxically, some of the most elite of the MREs, the Mevs, Brandt, Madsen and D’Adesky families, are now in business with the supposedly hated American invaders, renting and selling land and services to the U.S. forces.

One Haitian political expert, who supports Aristide’s return as an exercise in democracy even though he dislikes the man and his radical policies, believes at least some of these families are subtly engineering a plan that will frustrate the Americans and leave the families in eventual control.

Anon then presents some big-digs, going through all of helper’s questions at once: 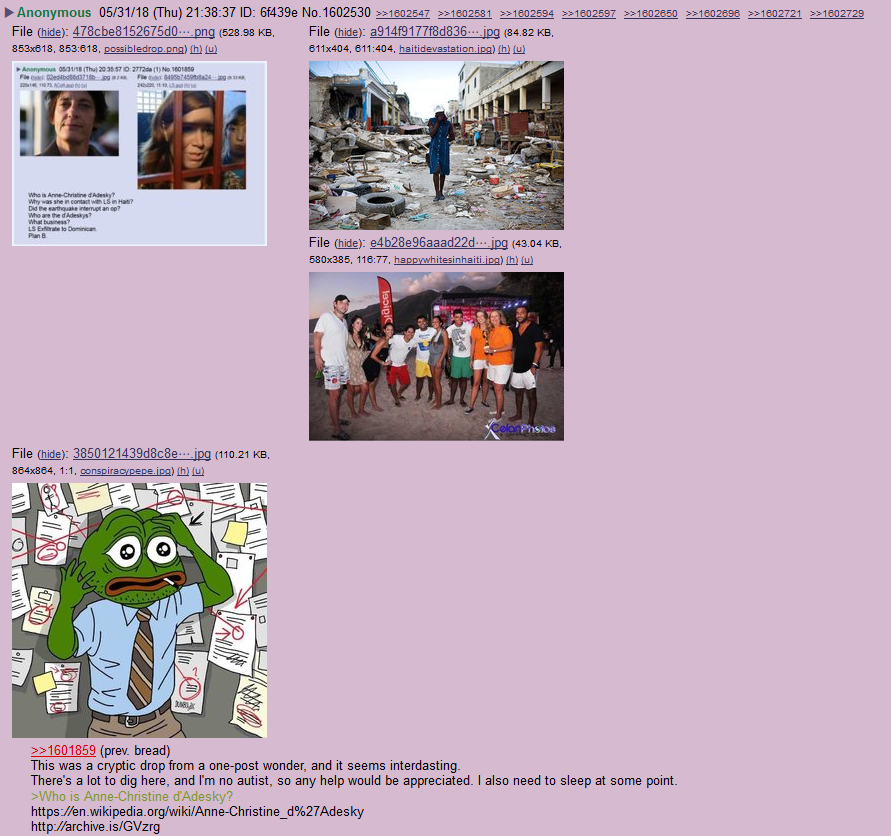 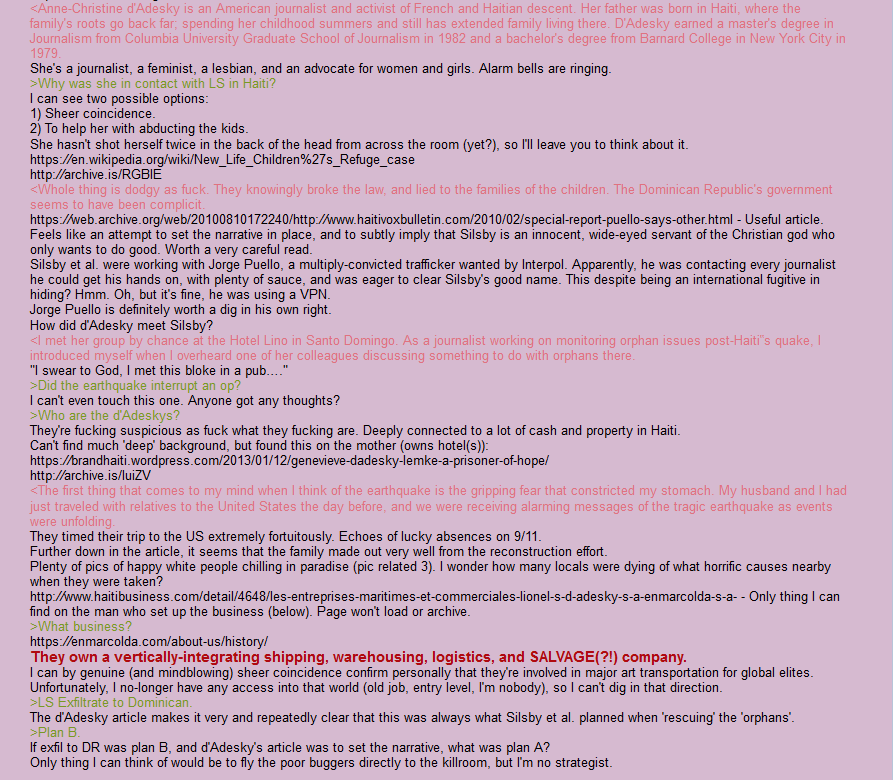 The question he didn’t answer – Did the Earthquake interrupt an Op? – I would answer that with a resounding “yes.”

Traffickers do NOT want to get stuck with a bunch of crying, hungry, scared children in the middle of a natural disaster. It does NOT make their lives easier.

This trafficking MUST have been underway already when Silsby was caught in the quake.

Plan A  to move the kids was lost. Whatever it was; it was no longer viable.

She needed a plan B.

Because she could move the children with her family’s assets on the other side of the island! 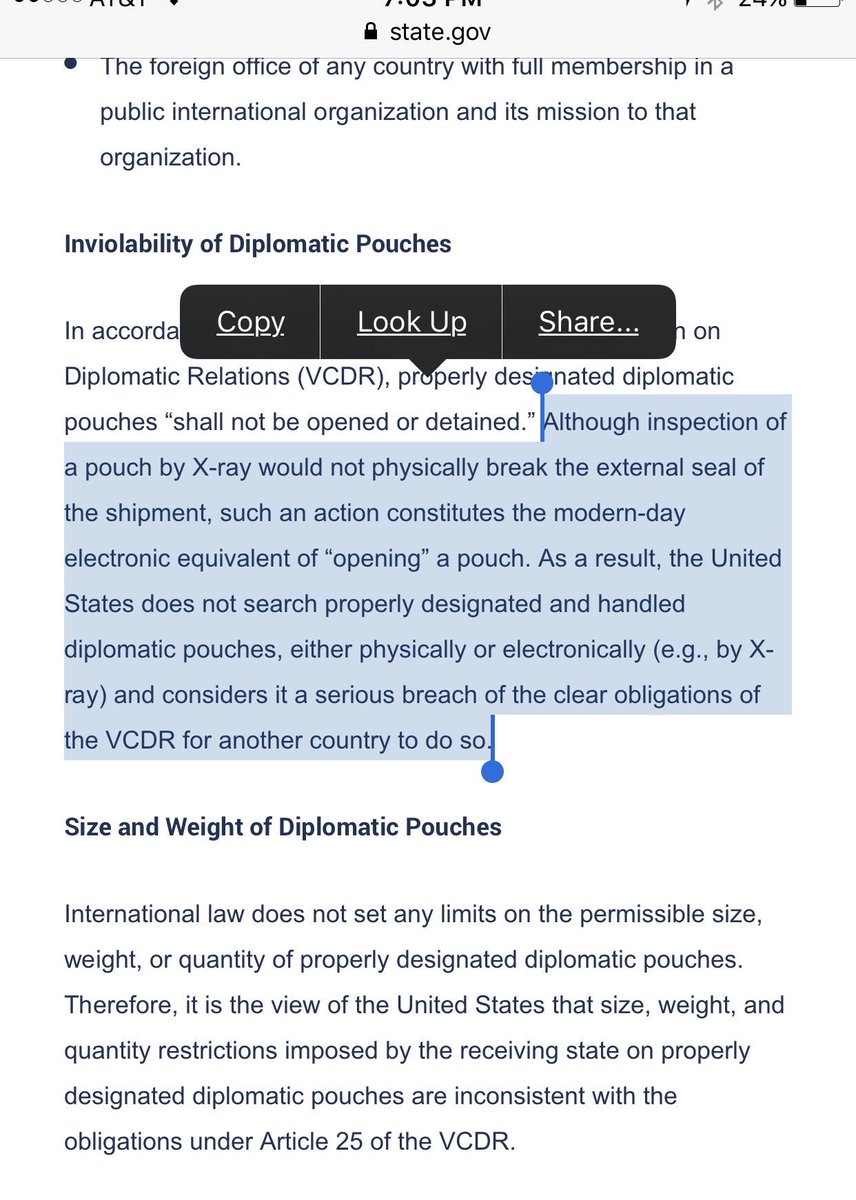 I realize we’re getting into a lot of details here, but really – this is so important – so make sure you catch it!

Anon references the Haitian Sentinel report linked above, and YES – BILL AND HRC HAD THEIR HONEYMOON THERE!

Which… I actually wrote about a while ago… but maybe not about what you’d expect:

The #Clintons and their History with #Voodoo. THEY GO AFTER TWINS!!! #Haiti #ChildTrafficking #RitualSatanicAbuse #QAnon

Sure, Bill. The early 2000’s were your “first” encounter with Voodoo – which, in all seriousness – is a cult where individuals offer themselves up to be “ridden” by spirits (like a horse) with blood sacrifices and such. The whole practice is frightful and utterly demonic.

But then Anon then drops a bomb: 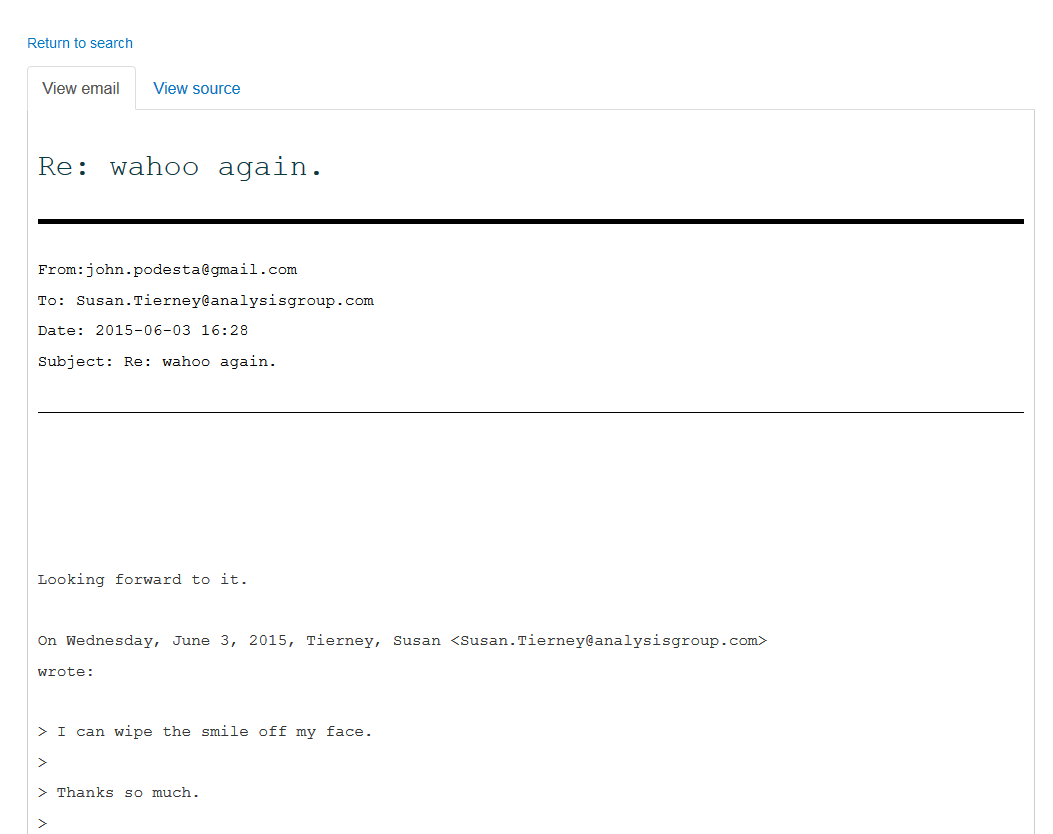 I’ll post the image again, in case you didn’t make the connection:

Wahoo beach. Owned by the d’Adeskys. Same people who own the shipping company we were talking about. #Podesta saying he [can’t] wait to get to Wahoo.

I swear, every time I see that miserable chicken-necked skeeze… 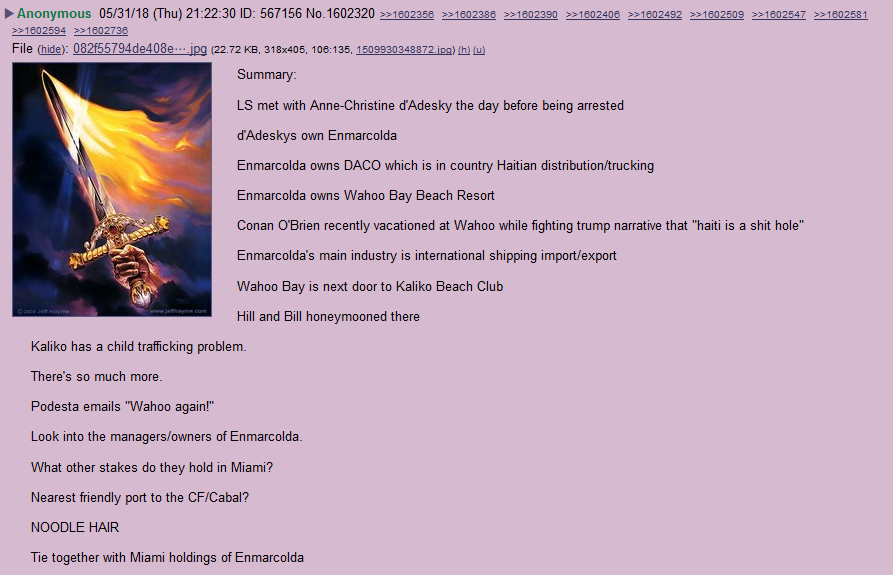 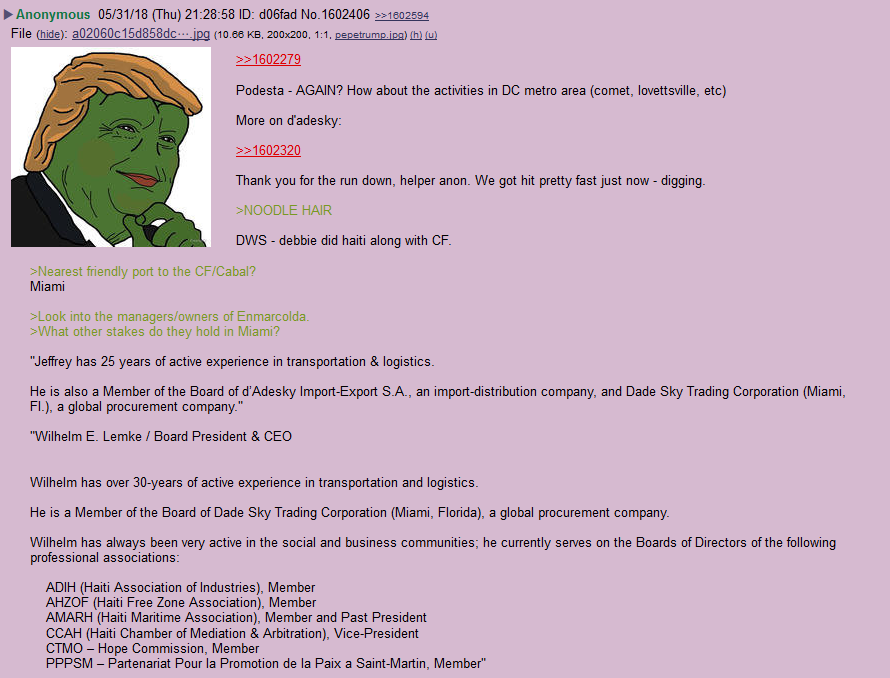 Ah, so here’s how they get them into the US. The same company controls both the shipping and receiving! 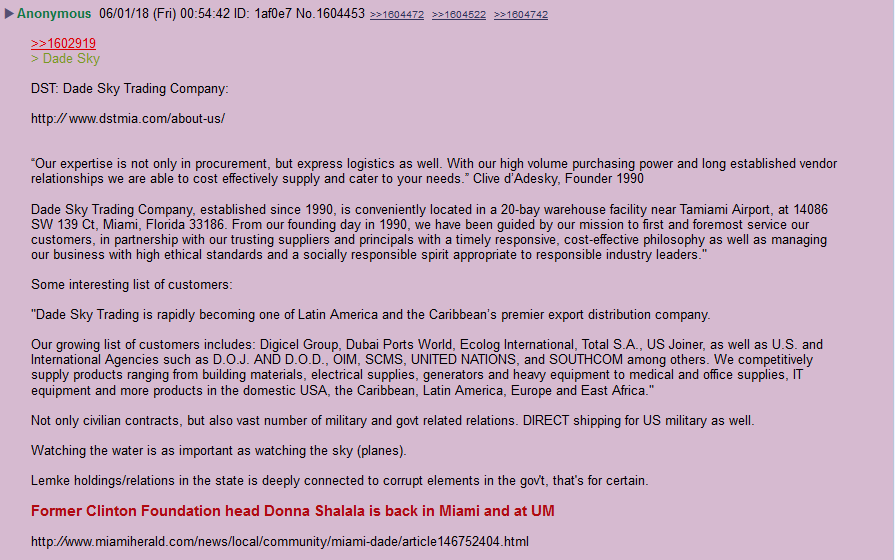 They traffick children from Haiti, through Miami, under the cover of “Christian missions work.”

They use cargo freight.

The cargo is never inspected.

And one company – owned by “Morally Repugnant Elite” – handles everything.

#TheCabal shudders as we begin to bring its evil deeds to light.

And this is just one example. We’re not even talking about things going on in Asia, or with the Vatican, or anywhere else.

This is just Haiti.

What happens from there?

Craig Sawyer gave us an idea when he published this video two nights ago:

We have to make these scum pay.