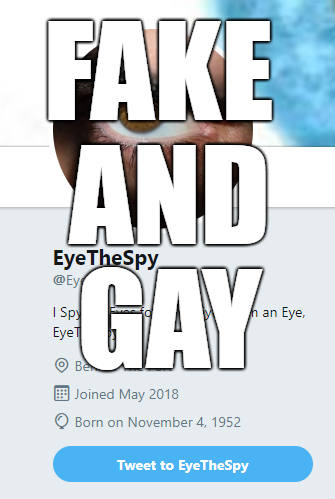 I’m going to be up-front. While this is a bit entertaining, it’s also kind of just #drama. I’d skip it if you’re as tired of that kind of stuff as I am. I’m only writing this because I keep getting asked about it. So here we go, Round 2 with EyeTheSpy.

Boy, EyeTheSpy really doesn’t like me for “some reason.”

He keeps tweeting about me literally every day in the wake of my article from 4 days ago, warning people about him being fake, spewing lie after lie after lie – not only about me, but about Q as well.

And I’ll show you exactly what I mean in a minute, but take a look at some of these tweets: 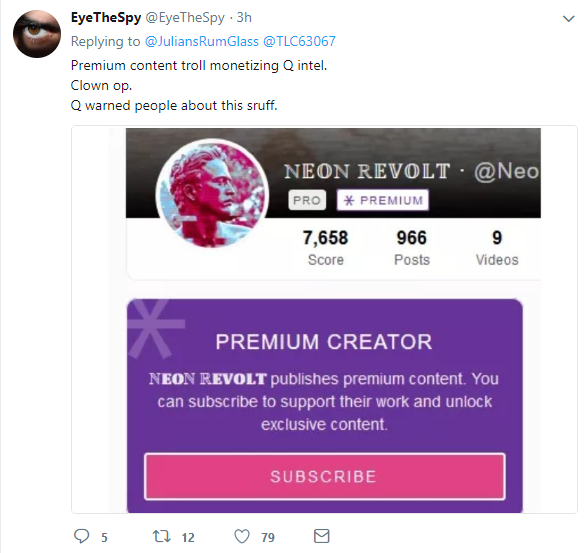 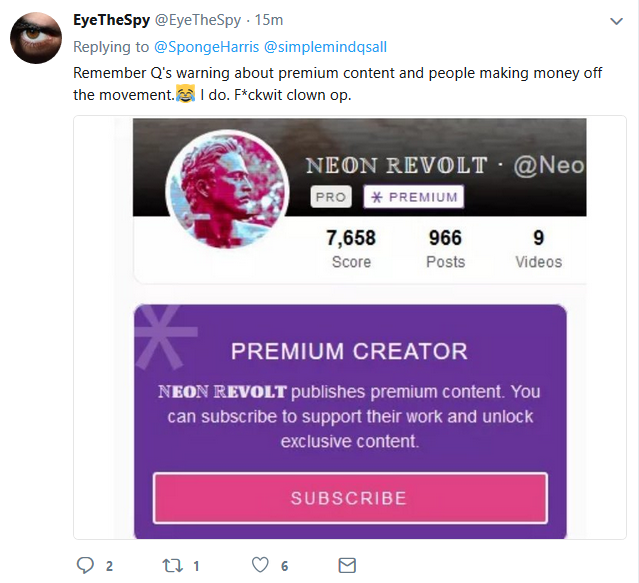 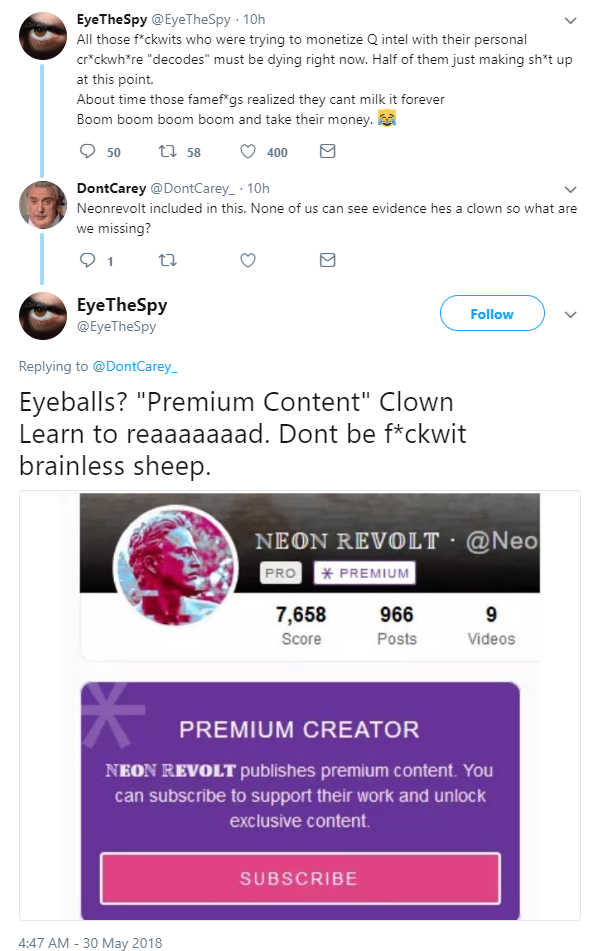 So his primary proof that I’m a clown  – which, let’s be clear, means I’m CIA – is that I’m “monetizing Q intel” (his words) and that this is somehow indicative of me being a clown.

Despite me being around for about two years now, across other sites and platforms – principally Facebook.

I also put a LOT of work into all this, and I think the worker is worth his wages.

But what did Q actually say about all this, and is EyeTheSpy accurately representing Q’s words? 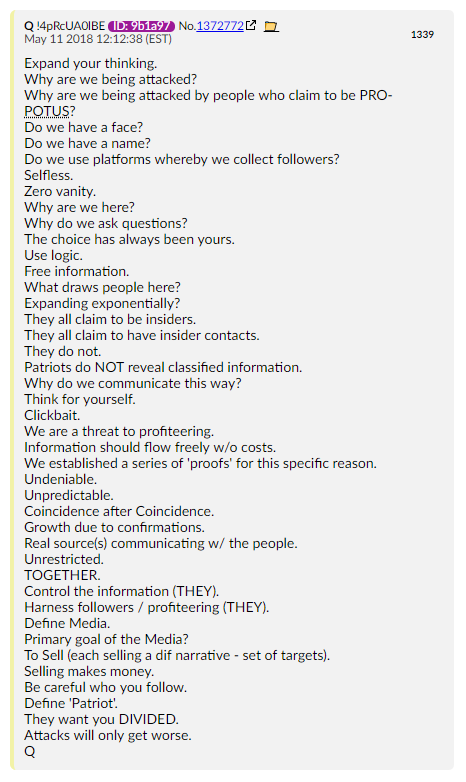 They all claim to be insiders.

As for me, you all know I’ve never claimed to be an insider.

The only thing I’ve ever claimed is that I’m an Anon who got really tired of being censored and deplatformed by the likes of Facebook and Twitter, and that I’m trying to organize and distribute information far and wide, as accurately as I can in the moment – giving the masses a sort of play-by-play, to the best of my ability.

They all claim to have insider contacts.

Hmmm… Kind of like how EyeTheSpy talks about allllllll his work for intelligence agencies, boasting about how much intel he has access to?

Of course he doesn’t. He’s a really obvious LARP who, frankly, was really easy to spot days ago, but who for some reason, has roped in a ton of gullible people.

Patriots do NOT reveal classified information.

Why do we communicate this way?
Think for yourself.

Because 8ch is a free and open channel – unlike Twitter – which literally has #TheCabal’s censorship algorithms built into it.

Funny how I’m banned from Twitter, and EyeTheSpy is able to operate freely on a Cabal-operated platform… Wonder why?🤔🤔🤔🤔

Sensationalism designed to catch people’s attention. An easy way to do this is to claim to be an individual with access above and beyond what’s available to the normal person.

Catnip for the gullible – especially during a time when Q has been silent.

Note – this is the opposite of what I do. I’m an Anon, on the boards, organizing info that everyone already has access to. I give credit to anons all the time. I basically serve as a navigator for the boards, for the masses. I do the work of filtering through everything, to get to the gems of real info that are already there, available to everyone.

This is my work – I go to the “mines” and “dig” for “gems” every single day. It’s hard work. It’s difficult work. But it’s work that many appreciate.

We are a threat to profiteering.
Information should flow freely w/o costs.

Which is why ALL my content here on the site is 100% free, and remains so for everyone – despite what EyeTheSpy says.

We established a series of ‘proofs’ for this specific reason.
Undeniable.
Unpredictable.
Coincidence after Coincidence.
Growth due to confirmations.
Real source(s) communicating w/ the people.
Unrestricted.
TOGETHER.

Q is your source. Simply put, all others claiming inside knowledge are charlatans. No, the NSA is not going to allow one rogue guy to start dropping intel on a Cabal-operated platform.

Control the information (THEY).
Harness followers / profiteering (THEY).

It’s all about control. Mind control.

Control and demoralize the masses. To divide with competing narratives, and conquer in the wake of division.

To Sell (each selling a dif narrative – set of targets).

They make you finance you own destruction.

Selling makes money.
Be careful who you follow.
Define ‘Patriot’.
They want you DIVIDED.
Attacks will only get worse.
Q

I want you to pay attention to that last line: Selling makes money. This is the carnal sin EyeTheSpy is accusing me of.

But what exactly am I supposedly selling?

But what does my donation page say?

In other words – it’s completely voluntary – and no, you won’t be getting any special content.

All this info has been up for days now, and yet EyeTheSpy keeps lying about me, saying I’m offering Premium Content when I’m simply not.

And if you still don’t believe me on this – you can check for yourself by donating to my Gab for one month.

You’ll find exactly 0 posts there [okay, save for one, where I said “Thank You” to my new donors – but that’s not exactly premium intel, is it? That’s just basic manners.

Here’s the post, so you won’t have to pay:

Huuurrrrr how horrible of me.

But again, because I feel the need to make this exceedingly clear: donations are different from selling.

EVERYONE gets the same articles and posts – regardless of whether they donate or not.

Donations are literally just a way for people to say “Thank You” for my work.

Seriously guys, I just had to shell out $120 bucks to keep this operation running for three more months.

Remember how my site went down the other day, because of bandwidth issues? Yeah, I’m not going to lie: I don’t have a lot of spare cash. And you already know I’ve been blacklisted from my industry – an industry which I may expose in the very near future, as I’ve turned up some very interesting information of late – but yeah, donations literally keep this site running.

Yeah, I’m dealing with real costs here, and I only expect costs to grow as the site grows in popularity, and more people reach out, looking for sources of reliable information on Q.

So, in the end, EyeTheSpy is not only lying about me – which, whatever, I don’t care. I’m still going to keep moving forward and plowing my proverbial fields, regardless. No, the thing you should really be concerned about is this:

He’s lying about Q and twisting his words as well.

Q isn’t anti-money. Remember #NoNeck Corsi accusing Q of being a communist? EyeTheSpy is just taking the inverse approach. Instead of saying “Q is a communist” as an insult, EyeTheSpy is basically saying it as a compliment.

And it’s amazing to me how many people are falling for it.

Of course, the reason he keeps tweeting about me every day, sometimes multiple times a day is because he’s dodging the challenge I issued to him when I wrote my original article:

What was that challenge? 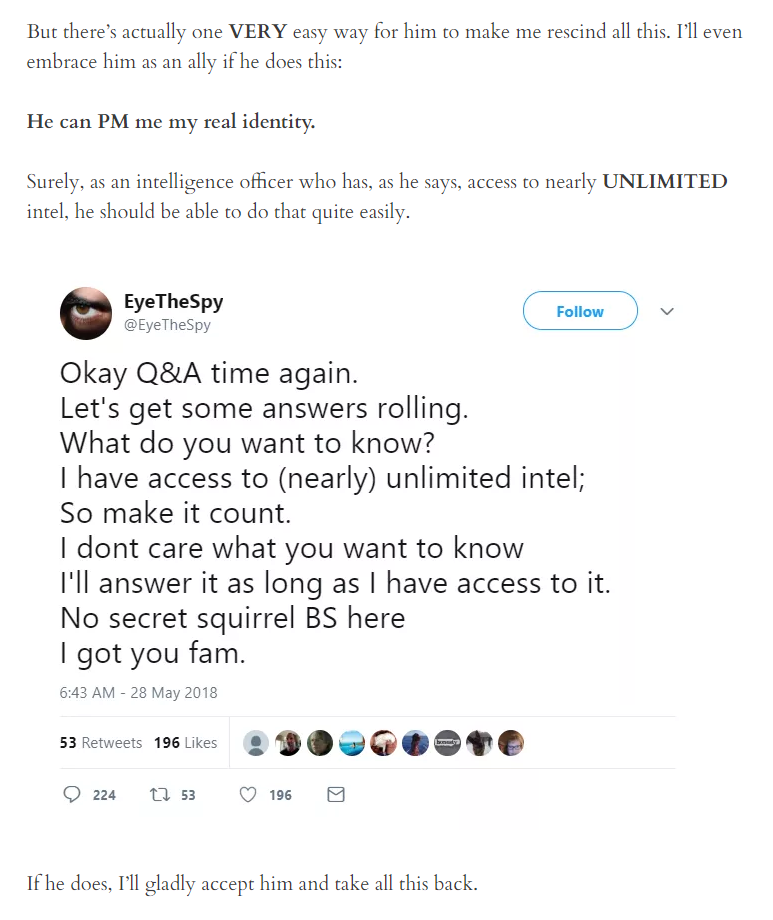 Again, EyeTheSpy claims to be Intelligence, with access to “(nearly) unlimited intel.” Again, those are his words.

So he should know who I am.

Yeah, he should have access to those financial records and see which bank account it’s going in to.

The simple fact is – if he’s really intel – he should know.

And he can tell me, legally. He wouldn’t be doxxing me. He’d be telling me what I already know.

Because he’s not real intel.

It’s been almost 100 hours since I issued that challenge, and the only thing EyeTheSpy has had to say for days now is

But if you claim to be a part of this movement – you do have to listen to Q.

And what did Q warn you about?

EyeTheSpy is a charlatan.

Or as we like to say on the Chans:

Hopefully, this will be the last article I write on this subject. Let’s get back to our regularly scheduled #QAnon broadcasts.

Oh hey! Hidden white text. Good find! Let’s see if EyeTheSpy does something tricky here and tries to photoshop a fake “premium content” post from me, now that he has a screenshot I posted of what my “premium posts” looks like. That will be hilarious is my white-text predicts this. Archiving this for an objective timestamp, too, so you’ll know I called it.