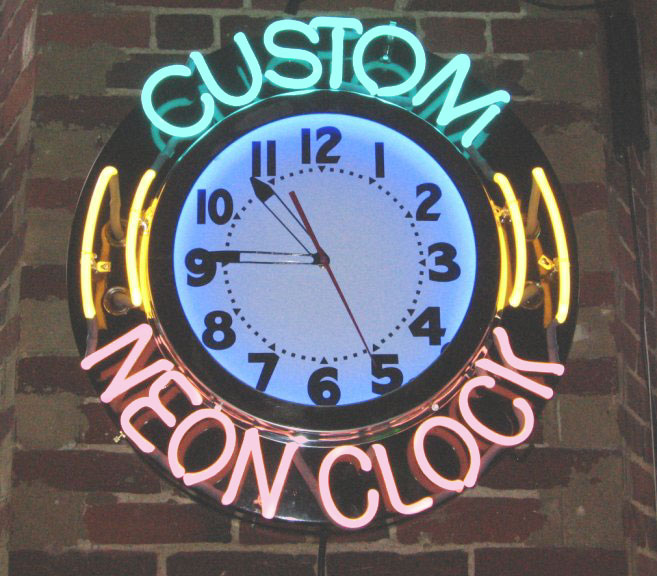 (Okay, I realize yesterday’s #QCipher post was a bit tough to follow at times, but don’t be intimidated by the title here. This one is easier, I swear!)

Ohhhhhh, how I was hoping this would develop into something I could report on!

It occurs to me that… I haven’t actually never gone over #QClocks in great detail with my Legionaries, so I’d like to amend that now. I know I’ve previously mentioned the #Qclock before, but I never really went into how it worked, or why it is the way it is. So I want to get in to that today, and really lay out all the details for you in a way that anyone can follow.

And while this will be easier to understand than my Qcipher post, you’ll still need to strap on your thinking cap.

I want to start with the phrase “Wind the Clock.”

“Wind the Clock,” as I’m sure most of you know, comes from Q himself. He first mentioned the phrase on January 6th, 2018: 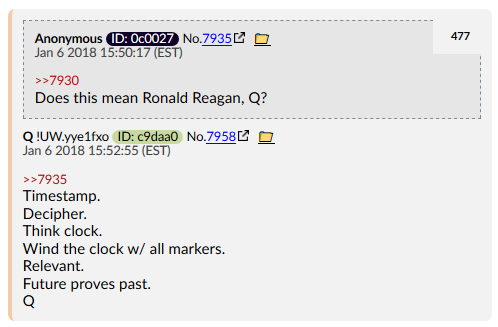 He then reiterates the next day, “Wind the clock.” 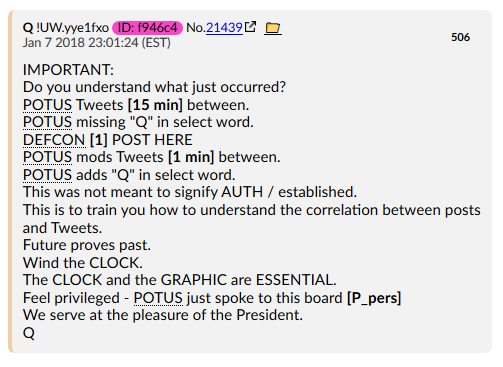 And also adds that:

The CLOCK and the GRAPHIC are ESSENTIAL.

So… what does it mean exactly to “Wind the Clock?”

Well, a LOT of theories have come and gone over the few months since, but the one that really stuck around is based off this chart, which I first posted here in an article a few days ago – and don’t worry if it doesn’t quite make sense yet, because I’ll explain everything: 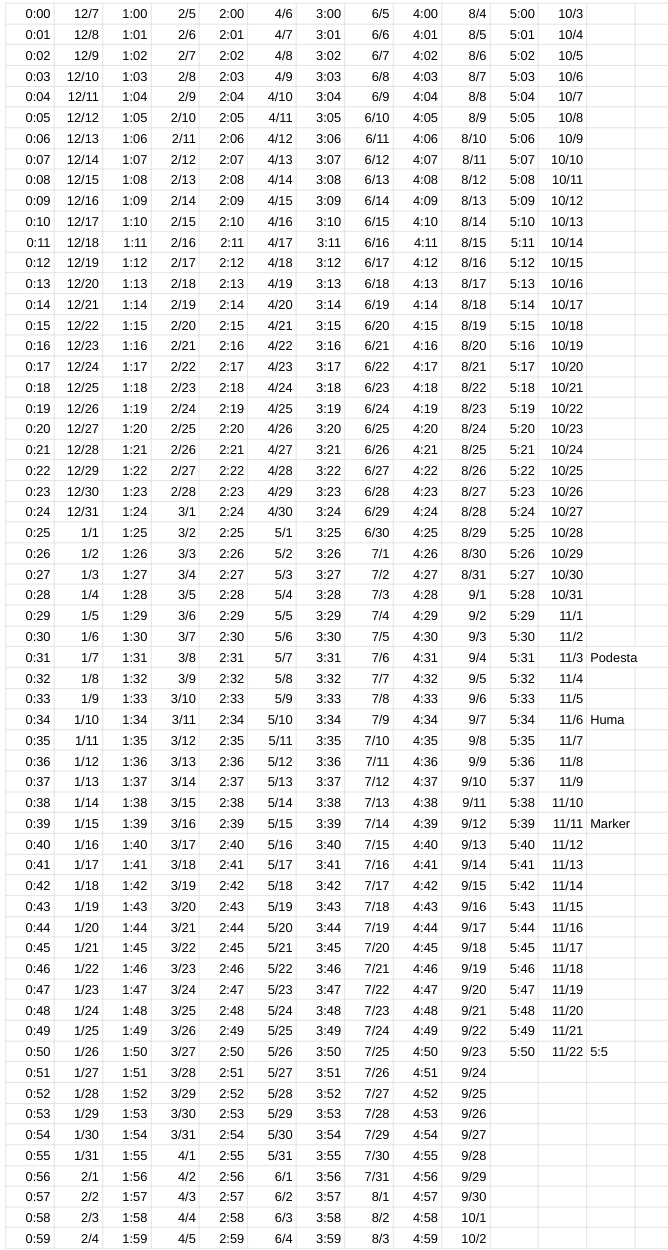 But before going further, I have to confess – I mislead you a bit before.

But it was for a good reason!

While the first mention of “Wind the Clock” happens January 6th, Q ACTUALLY mentioned the “clock” for the first time aaaaaaallllllllllllllllllll the way back on December 18th, 2017, when most of us were still wrapping gifts.

So from here, we have our starting date.

At the most basic, a clock is a tool that marks the passage of time. And what anons eventually landed on is that each day can be represented on the 60 degrees of a clock. Each day, then, is essentially equal to one “second” on the clock face.

And if you were to lay enough dates out in a circle, eventually, you would get something that looks like…. 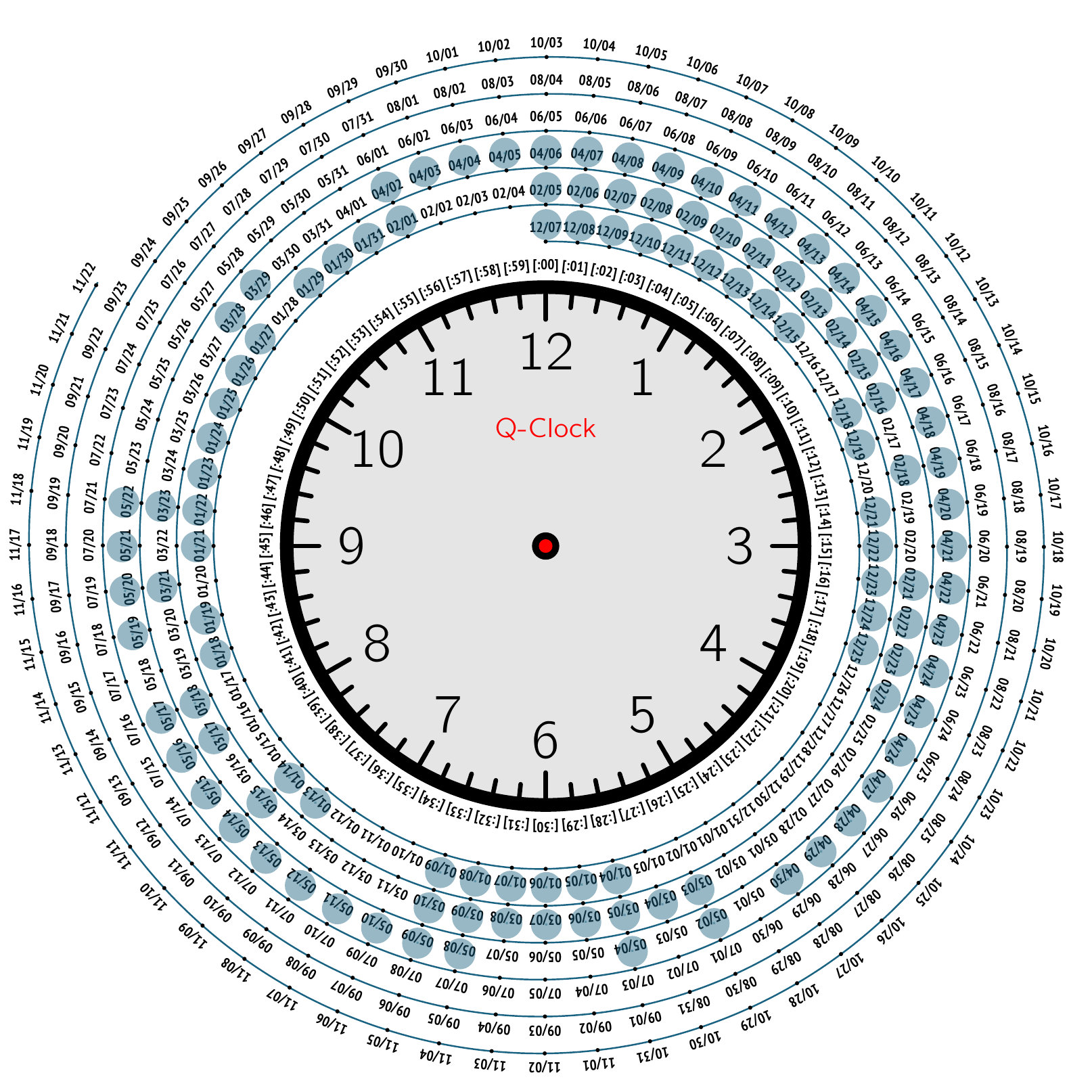 Impressive, right? Thank the Anons! A LOT of awesome work has gone into this.

Every date has a second. All the light blue circles indicate a day Q dropped posts. And frankly, it’s a beautiful piece of work.

And what you see starts to happen, when you arrange it all like this, is that patterns start to emerge. News begins to line up with past drops.

When Q says “Future proves past” he means that literally, because Markers and drops literally line up with events that are already planned in the future.

So, for instance, let’s look at the HAMMER marker.

Drops referencing “hammer” were on Jan 21 and Apr 6,

With that in mind, I would then look for Jeff Sessions-related news, on June 5 and July 20. (And this is kind of exciting to me, because these dates are rapidly approaching. We’ll be able to test this soon). So mark your calendars; I would not be surprised if news came out related to that on either of those days.

But remember – Q says wind the clock with ALL markers.

So, think back. We can track MOAB, HUMA, BIDEN, CHINA, [1] – and literally everything because that’s what Q said to do.

And that’s exactly what Anon’s are starting to do, starting with the day everyone wants to know about: 55!

He then went back and noticed some things lining up – notably the day AFTER being “Freedom Day” or [D]ay [o]f [D]ays – which would be 06/01 now, if we follow along.

And I’m going to correct a mistake anon made here, because Q’s post doesn’t actually have 55 exclamation marks.

Which would then line up with anon saying “tomorrow” is Freedom day, and Q responding with Day of Days.

As a side-note – and I said this to a few people privately – but I had a pet theory that we were experiencing another “10 days of darkness” given Q’s extended silence. I was saying to people, “I think Q will be back on 06/01. I think I might have even mentioned it in the MeWe group chat, but I’m not 100% sure. If this 55/56 theory is correct – then yes, we just had another 10 days of darkness.

And it lines up almost directly opposite the original 10 days of darkness, which occurred from 12/26 to 01/03!

I’m not sure I understand the mechanism for determining when these 10 days of darkness are scheduled to fall just yet, but if Q stays silent until 06/01, I think it’s just that much more evidence pointing to this clock being correct.

Which implies, they already know when certain things are going to not only happen, but when they are going to be reported in the media.

And one Anon uncovered this, today: 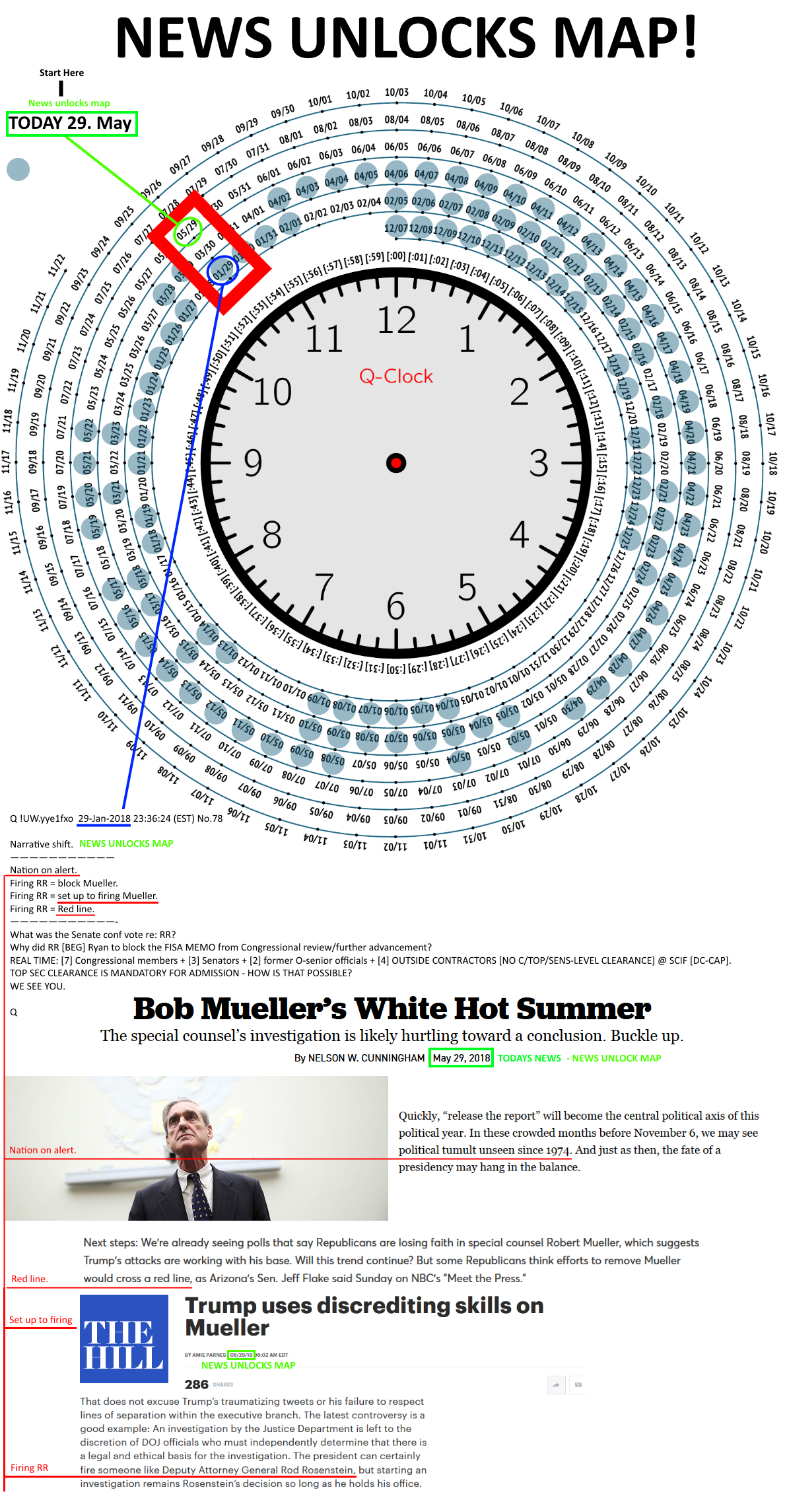 Kudos to eagle-eyed anon here for finding and correlating these stories.

Want to see how deep this can go?

Try this confirmation on for size, dealing with [53]: 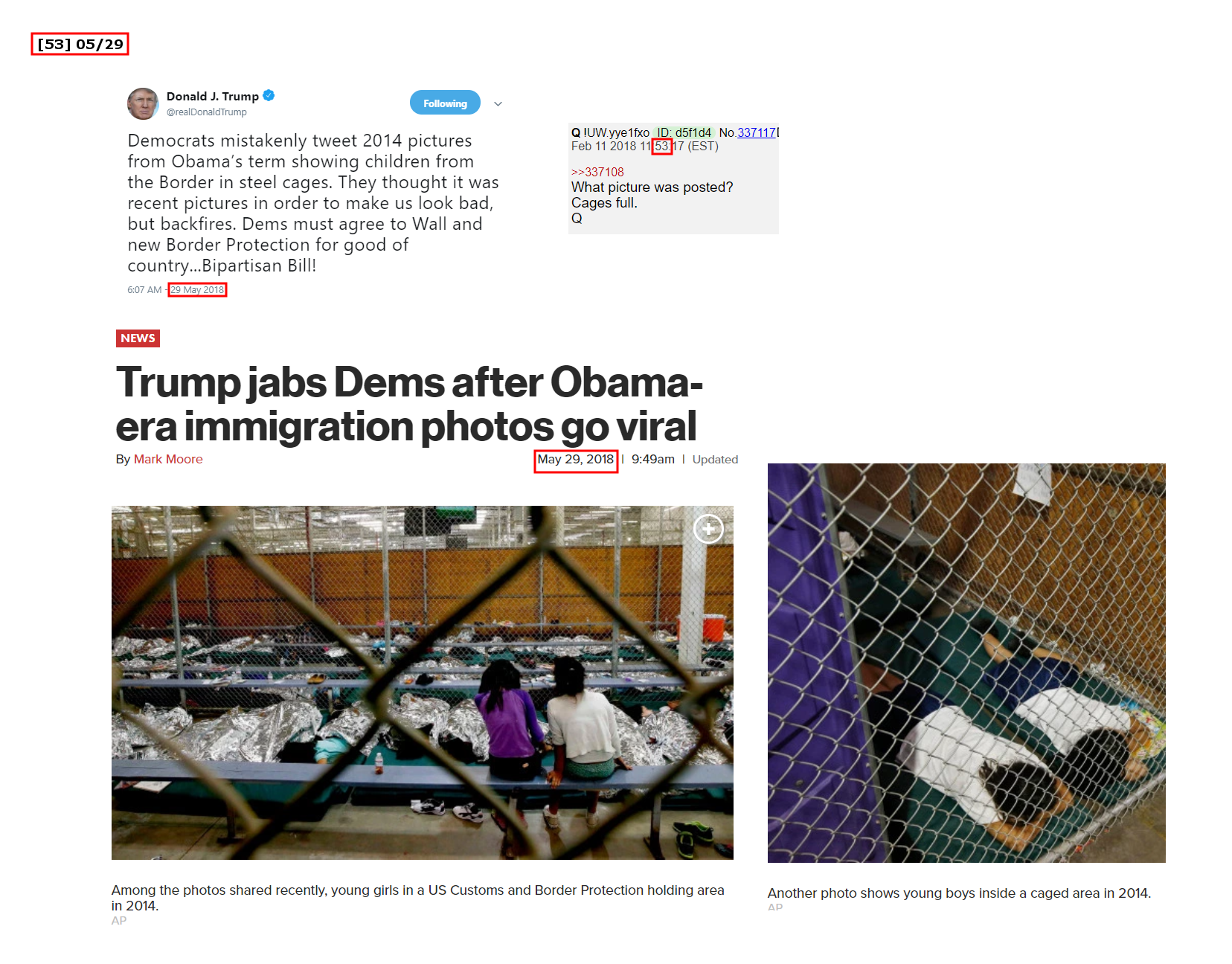 Do you understand the implications of that!?

QTEAM is behind the recent trafficking stories spreading across the media! THEY initiated it! Not the Mockingbird media!

But it gets wilder than that:

What about “Pen Proofs?” 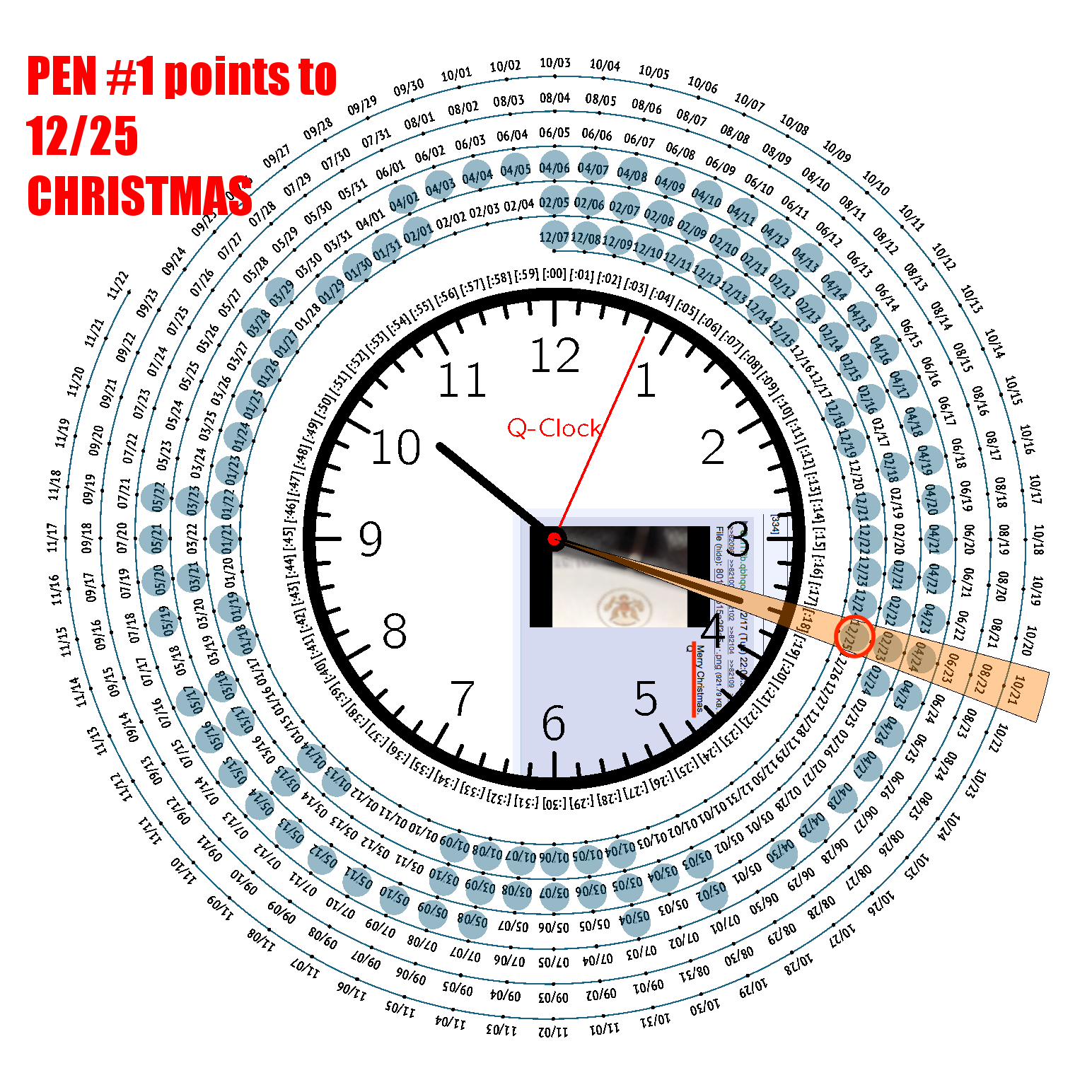 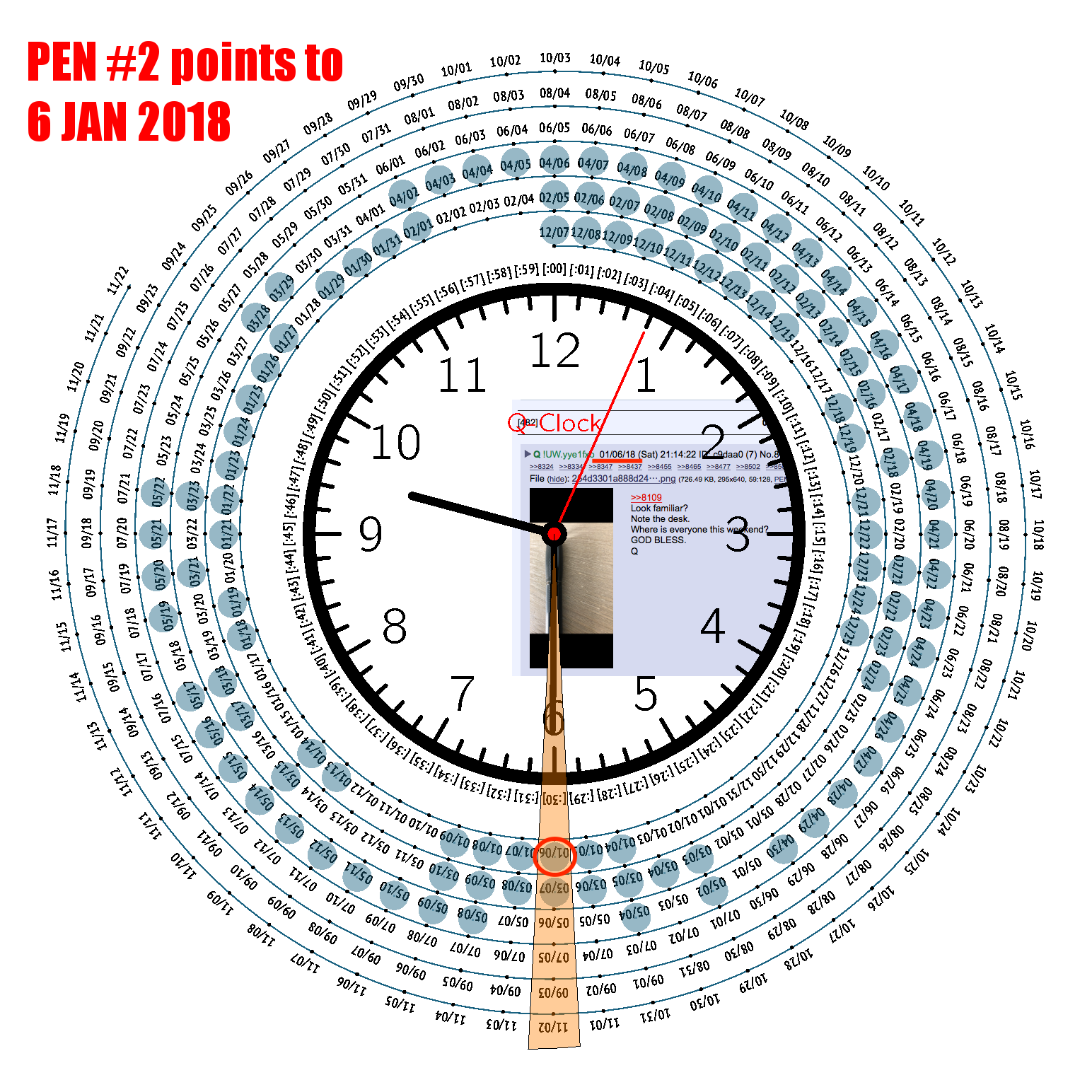 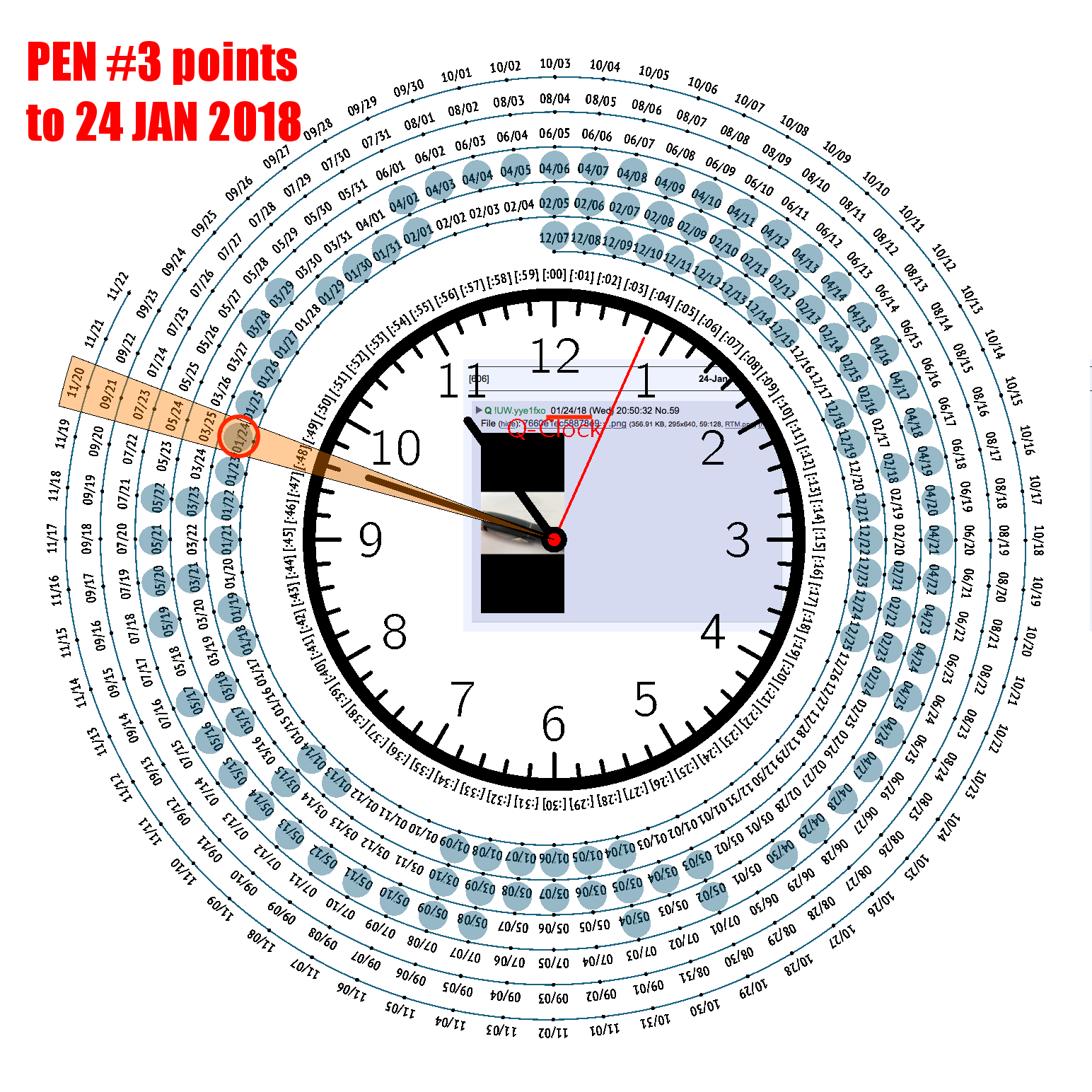 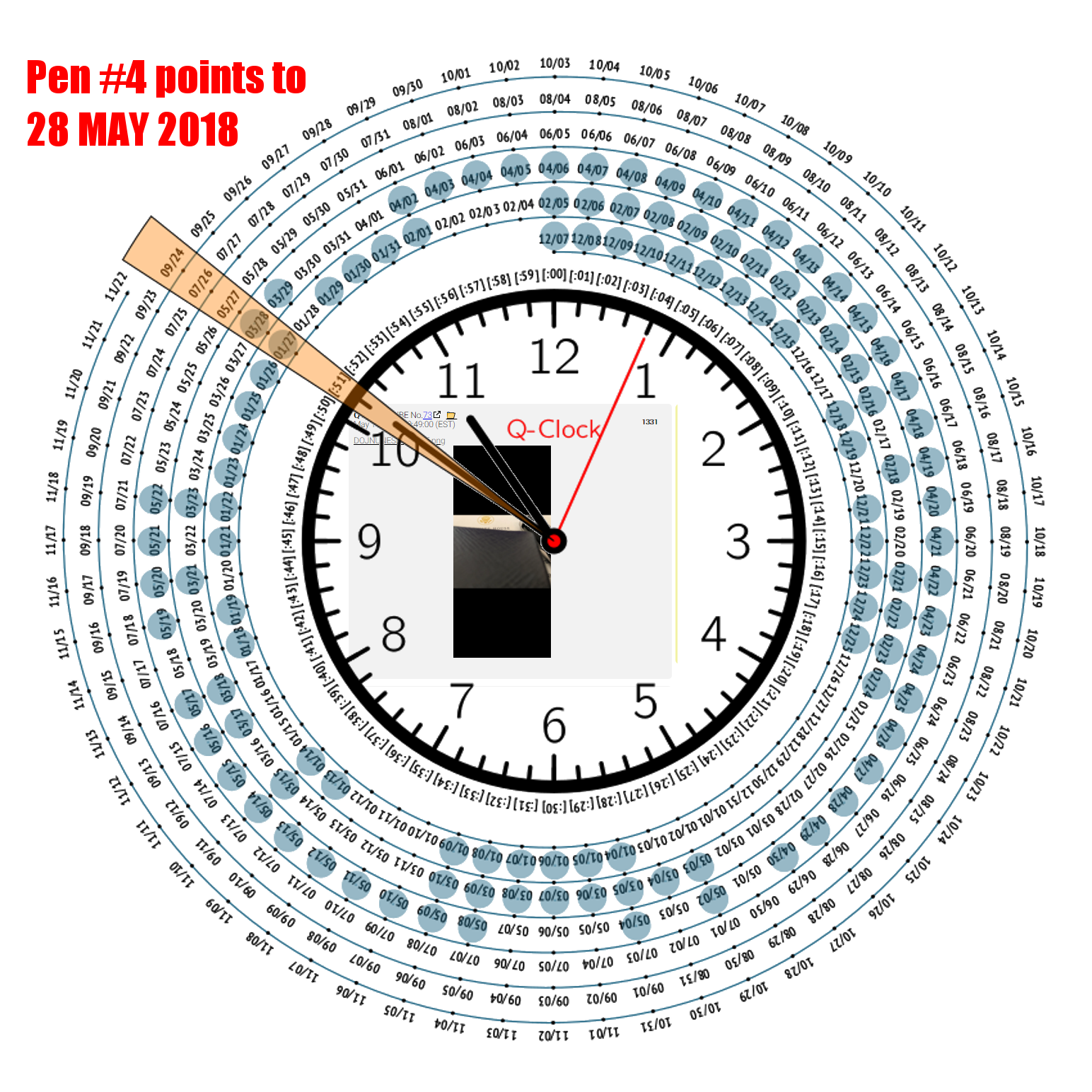 One last one, from the same anon who was looking into Freedom Day on 06/01.

And Trump’s own positioning of himself:

Guys! Really – if you’re not understanding this yet, take some time to re-read it. This is one of the biggest developments in Qresearch history. Time will, of course, tell if we’re right, but right now, it’s looking like more and more a MAJOR piece of the puzzle just fell into place.

Get ready. Because if this theory is accurate, things are about to go OFF!