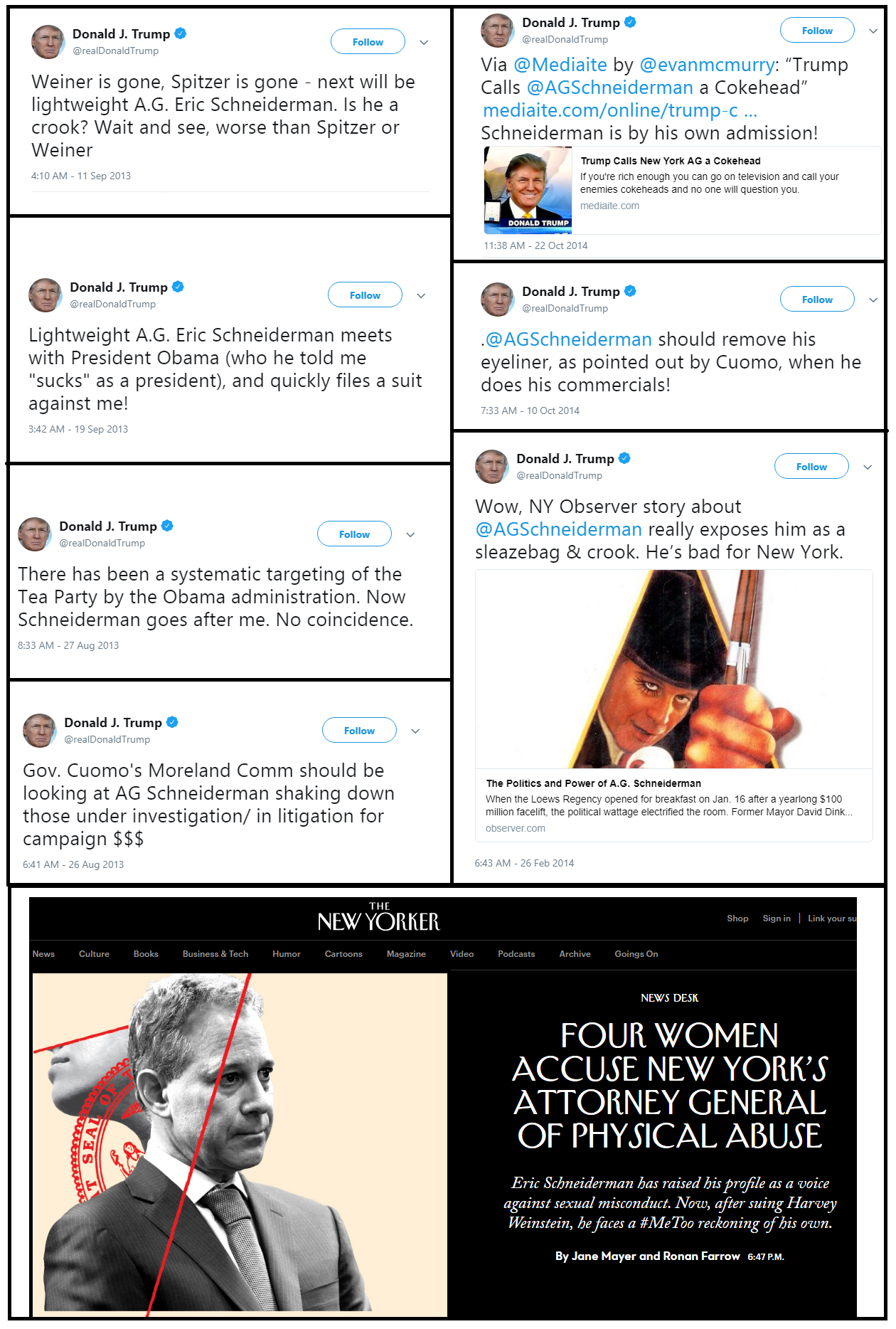 I held off on publishing this today, just to see if #QAnon would come back and add more, and he certainty did. But if you’re here and following Q, you know something weird just happened – and I think Q team was scrambling today.

Let’s avoid overreaction, and go into the drops. 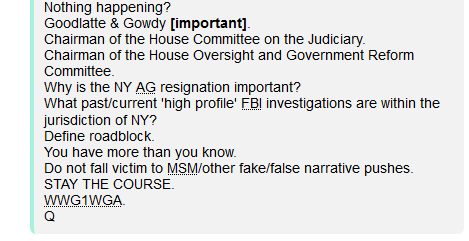 It’s a good list for reference purposes. The swamp is being drained, every day.

We applaud the Attorney General for demonstrating his commitment to this investigation by selecting an individual outside of Washington, D.C. to lead the review.

Why is getting rid of Schneiderman important? Besides being an all-around scumbag, who used and abused women (while simultaneously taking the stage for “women’s rights), he was the one who blocked the #NXIVM (pronounced: “Nexium,” like the pharmaceutical) investigation: 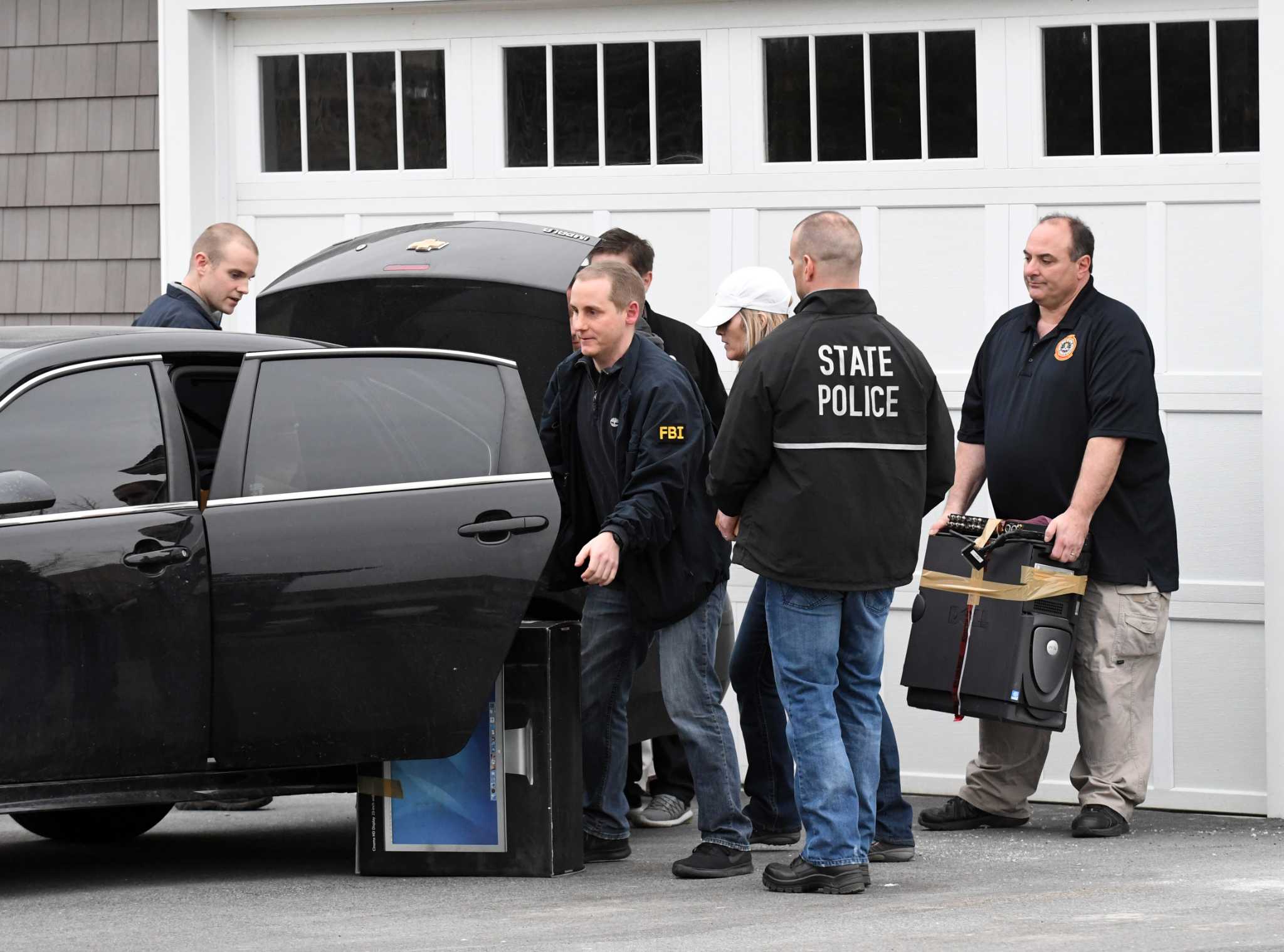 ALBANY — The state attorney general's office has suspended its investigation of a...

Also he was completely owned by #Soros: 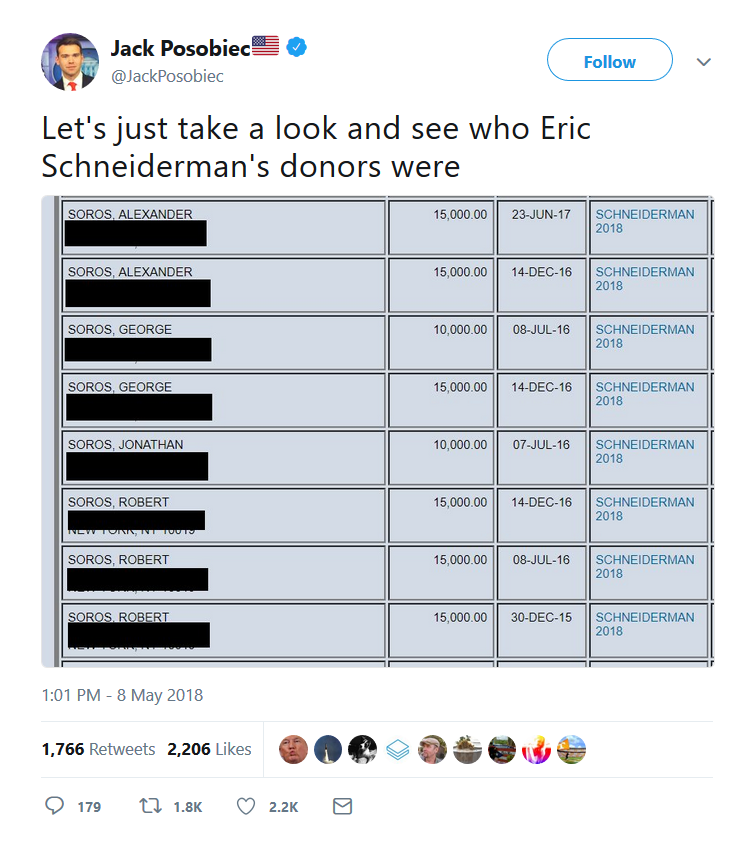 Also, Trump’s tweets about him were downright prophetic (and hilarious):

So yeah, he was a total dirtbag; part of #TheCabal, trying to protect its own. And I’m tellin’ ya; Trump has been in this for a long, long time.

But why is this important?

Remember, NXIVM ties directly back to the Clintons. I said a while back that NXIVM is the lead domino in all this, and will take out so many more in the process.

Now here is where things get interesting…

Someone decided to say “hey.”

Literally one second later, the real Q posted this. 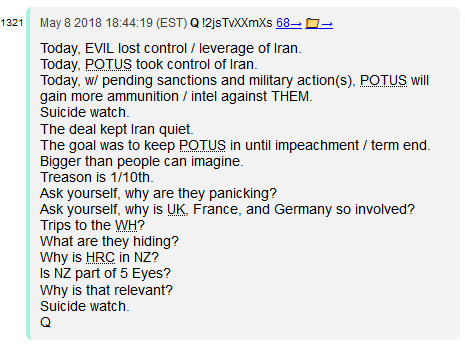 So bear with me as we dive in, and hold off on the login/tripcode issues for just a moment:

Trump killed the Iran deal today. And if you’ve followed the previous posts, you know this was because Iran was where #TheCabal was building their nukes; the nukes they would use to launch a false-flag attack against us, and use that as a basis to start WWIII.

If you’re just arriving here for the first time and that sounds crazy to you… you need to catch up. Start here:

Today, We Are CANCELLING The #Apocalypse. #NewQ #QAnon #GreatAwakening

The UK, France, and Germany are panicking because many Cabal actors there were helping facilitate all this. Remember; part of “the plan” was to keep Europe relatively safe and controlled. Bombs wouldn’t be falling on the European continent, according to the plan. So they figured they might as well make a buck while bringing about the end of the world.

What are they hiding?

They’re hiding the fact that they’re still trying to salvage their little plan for world destruction.

That’s right; don’t think for a minute that they’ve given up. They’re scrambling, trying to move around assets, timetables, and resources so that they can still spread nuclear devastation.

Hillary is in New Zealand – yes, a member of the Five Eyes – trying to do just that.

Her line of thinking is: So what if she has to wait a few more years? She’ll run again in 2020; they’ll steal the election, and by 2021, they’ll have nukes flying.

She needs to meet the firing squad long, long before that’s ever allowed to happen.

#LockHerUp is no longer severe enough.

Multiple #Anons took it upon themselves to warn Q to change his trip. Again, this is within seconds of it happening.

And if I had to speculate, good OPSEC would dictate that QTeam has a number of these tripcodes, ready to go.

Because this new tripcode was authorized to post on his own, private board /patriotsfight/.

In other words, QTeam created their own board, added their own list of pre-registered Q-affiliated tripcodes (for if/when they needed to make use of a new one), and were able to fall back to a new trip within minutes.

In other words, they had backup accounts ready to go at the drop of a hat. 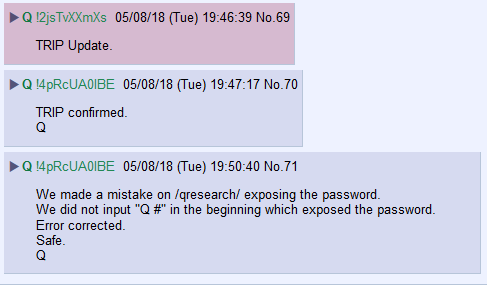 Everything is safe. Knowing how the chans work, it’s not a huge deal. QTeam was prepared for such an event.

Don’t be too hard on yourself, QTeam – and I think it’s important to note, yes, Q says “we” here.

I hope that will finally put to rest some of the talk flying around about Q being an advanced AI.

It probably won’t. But it should.