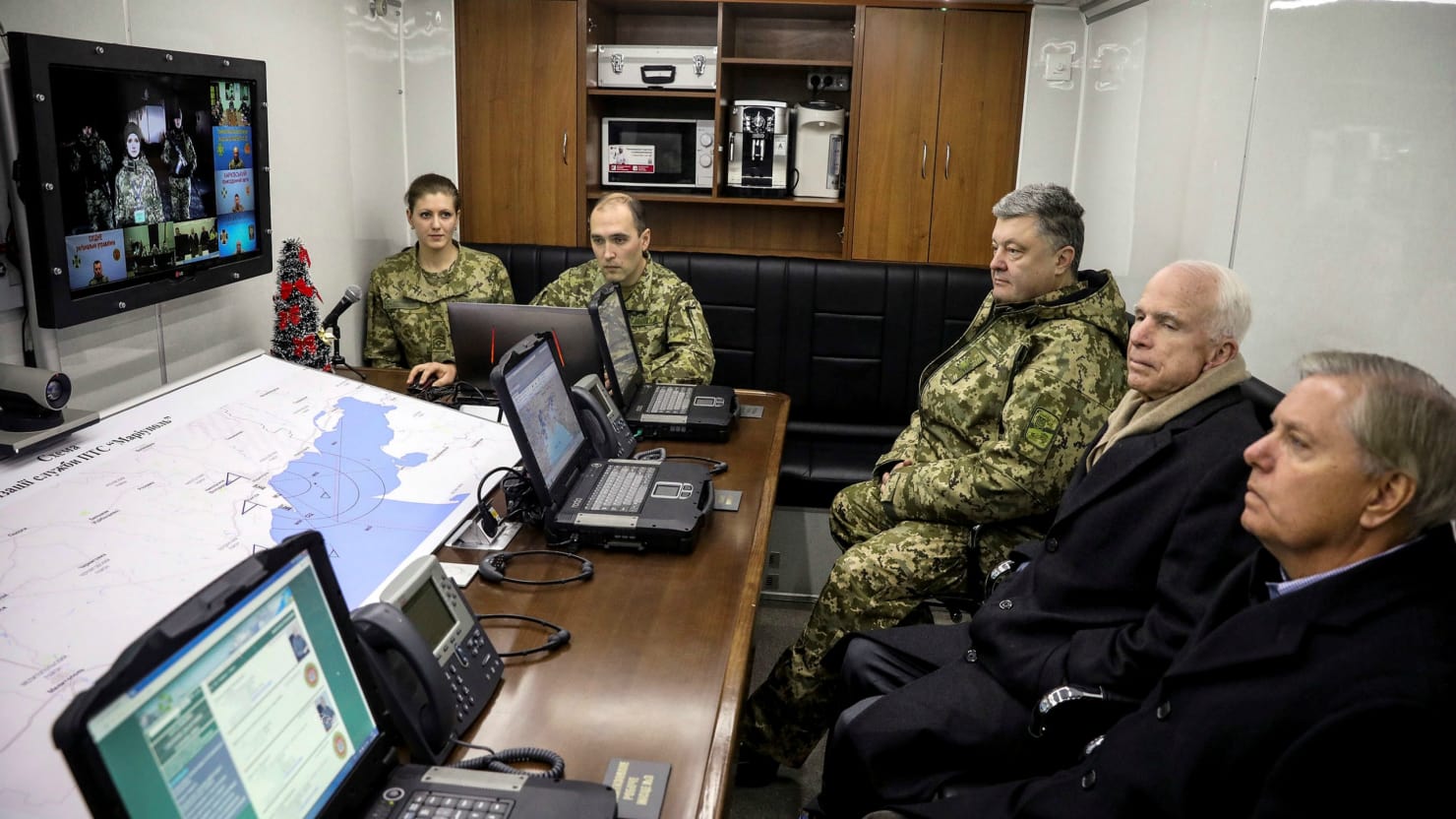 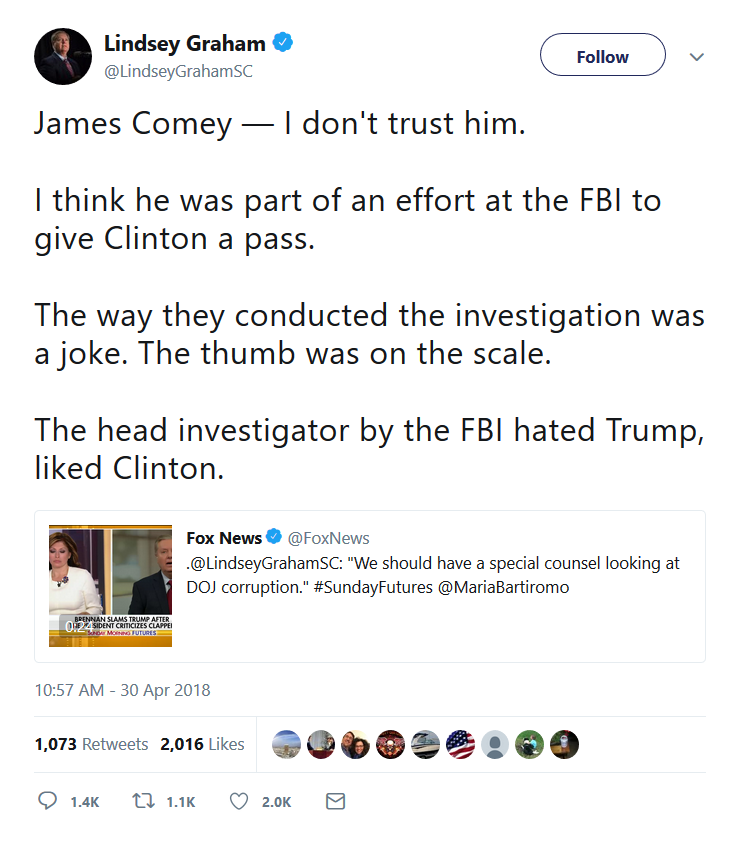 Huh, that’s out of character for Sen. Graham. Remember, he used to follow around #NoName like a puppy dog – even if he didn’t look entirely happy about it. Almost like NoName had him on a leash…

Looks like someone’s had his strings cut, and is now able to move and act and speak freely. 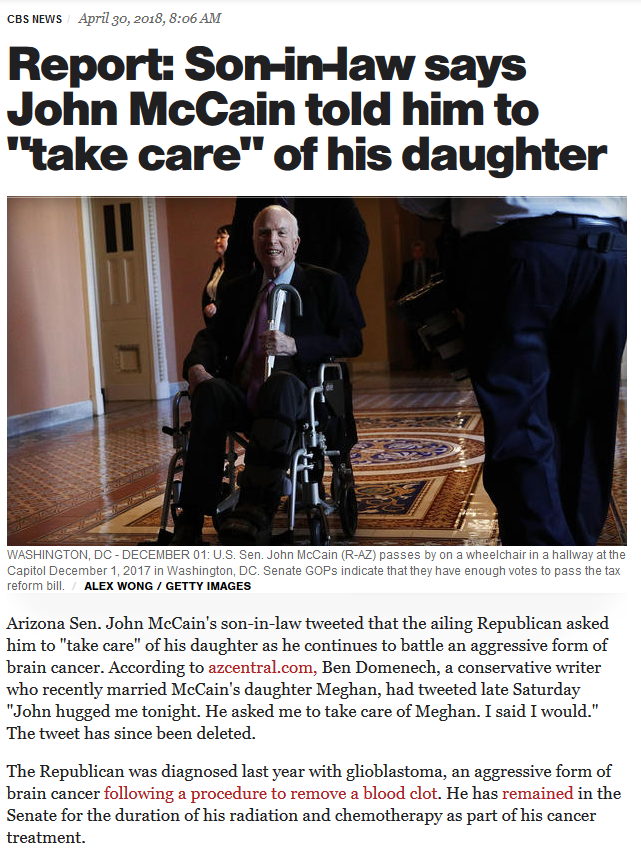 Traitor McNoName knows the end draws nigh for him.

#QAnon comes back with this drop about an hour later, sort of picking up where we left off last night… 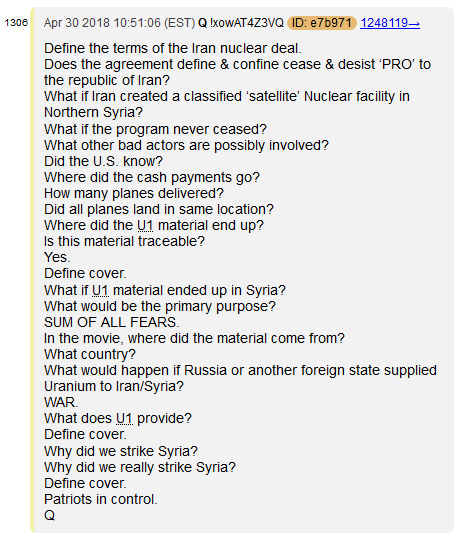 We know US and Jordanian Marines ran a joint-operation last night, taking out a [Renegade]-funded base.

Now, it appears the location of that base has come to light: 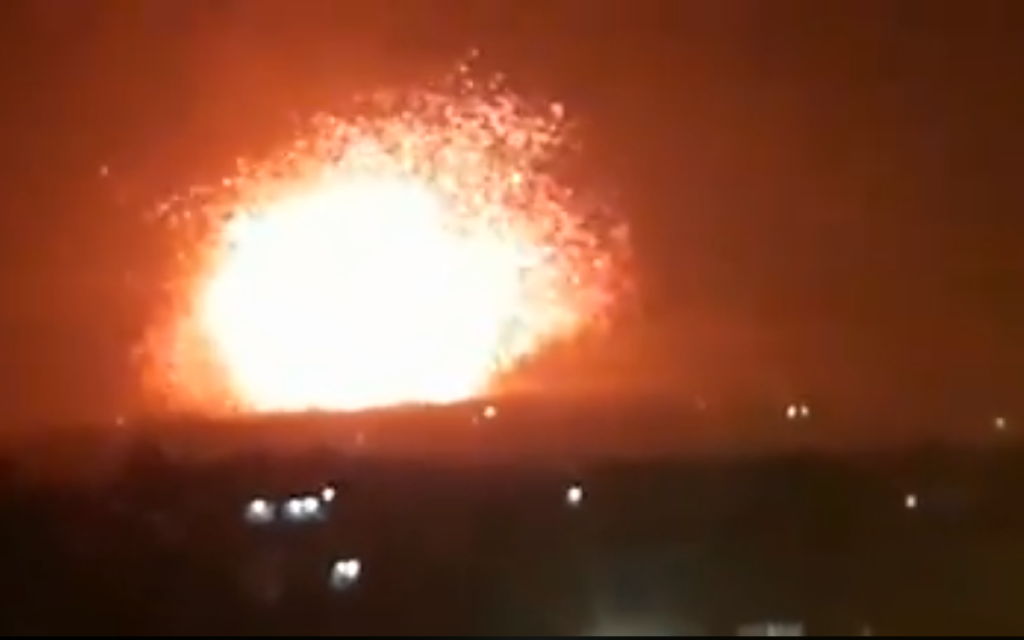 Explosions reported at alleged Iranian militia base in northern Syria

Iranian operators hanging out in Syria. According to Q, this is the “satellite” Iranian facility involved in manufacturing nuclear arms. These were the people Obama was funneling money to, through his little Iron Eagle shell company.

The other new bit of intel in these drops is that while Iron Eagle was used to cover up these “ransom” payments Obama made, Uranium1 was used to cover up the fact that Russia was providing the nuclear materials for sale to these nations! (Although there are some other possibilities, admittedly, which we’ll take a look at in a moment – but this is my reading of it).

Which, of course, implies that HILLARY had been colluding with the Russians the whole time, literally risking nuclear war and the destruction of our entire nation!

Go refer back to some answers on post 199, if you need help on the details: 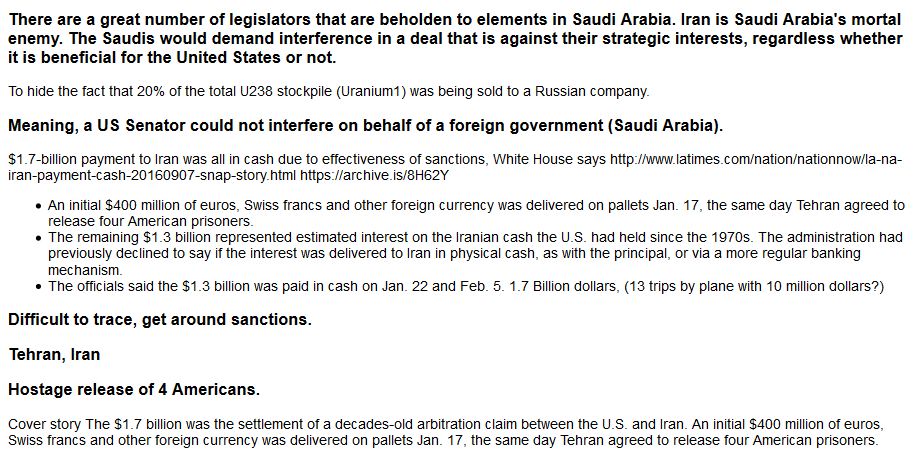 (Okay, here are some other possibilities, explained by #Anons): 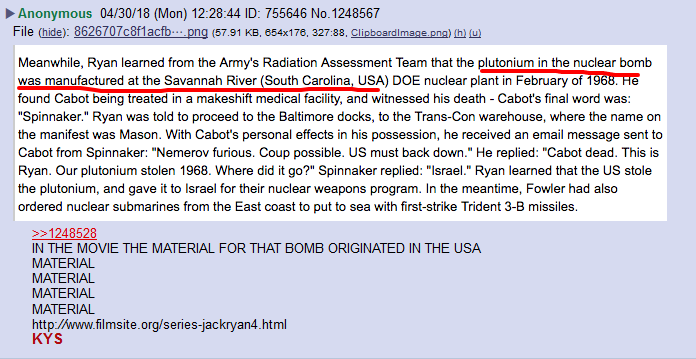 So there are a few candidates here, because of how many parties are involved. It’s hard to say who, exactly, right now.

But I tend to lean towards this view (Not sure I agree with the Putin bit, but it’s hard to say):

So what are we talking about as the end result here? 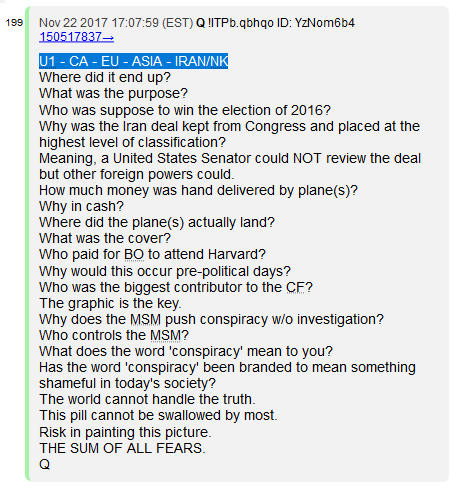 Materials procured from the US.

Money laundered to bad actors, to fund their operations.

Bombs constructed with the ultimate goal being that of the movie, Sum of All Fears:

And a Nuclear False Flag on US soil that could be attributed to Russia and start World War III.

Are you gaining a better understanding of what that all means:

Hillary and Obama LITERALLY sold us out.

They LITERALLY wanted us dead, so that they could profit and remain in control.

Go back to Q drop 570, where he starts going over the 16 year plan to destroy America:

DO YOU UNDERSTAND HOW CLOSE WE WERE TO THIS BEING REALIZED?!?

DO YOU UNDERSTAND THE MIRACLE WE RECEIVED WHEN TRUMP WAS ELECTED?

God literally canceled the apocalypse for us.

And then there’s this bit of posturing: 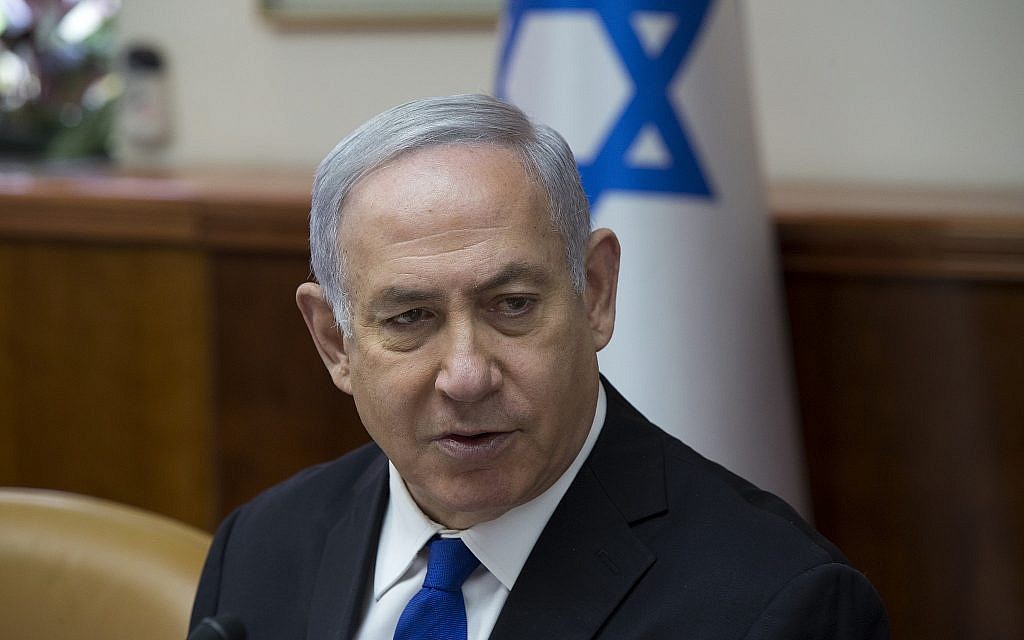 PM to speak, in English, at 8pm; TV reports say he'll reveal intel proving Tehran is not adhering to accord with world powers; Iranian FM: 'The boy who cried wolf is at it again'

I don’t trust this guy at all. I like Bibi – he has that great orator’s voice – but I don’t trust him. Israel has, arguably, the best military in the Middle East, and oh, by the way, they suddenly figured out what was going on in their own backyard? Nah.

This comes hot on the heels of their unilateral strike in Syria, which literally almost started WWIII. Trump managed to miraculously defuse that situation, and take out a ton of Cabal-affiliated chemical and nuclear facilities in the process.

I know Q says they’re saving Israel for last, but part of me can’t help but think they’re leaving the most dangerous player on the field for an uncomfortably long time. Not that I claim to know more than QTeam. I trust the plan.

Maybe Bibi is a good guy, in charge of a bad state. I’m not sure. I’m reserving judgement.

With that in mind, Q’s last line is very reassuring:

And just as I’m about to publish, Q comes back and addresses the “Bibi” Question: 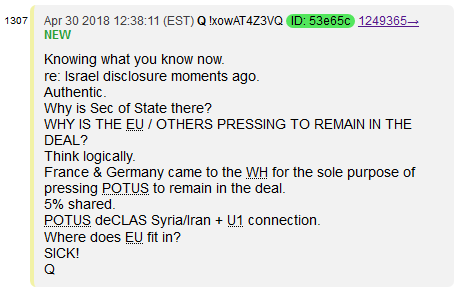 First thing that hits me: Wait, Pompeo is in Israel now? He was just in Jordan last night… 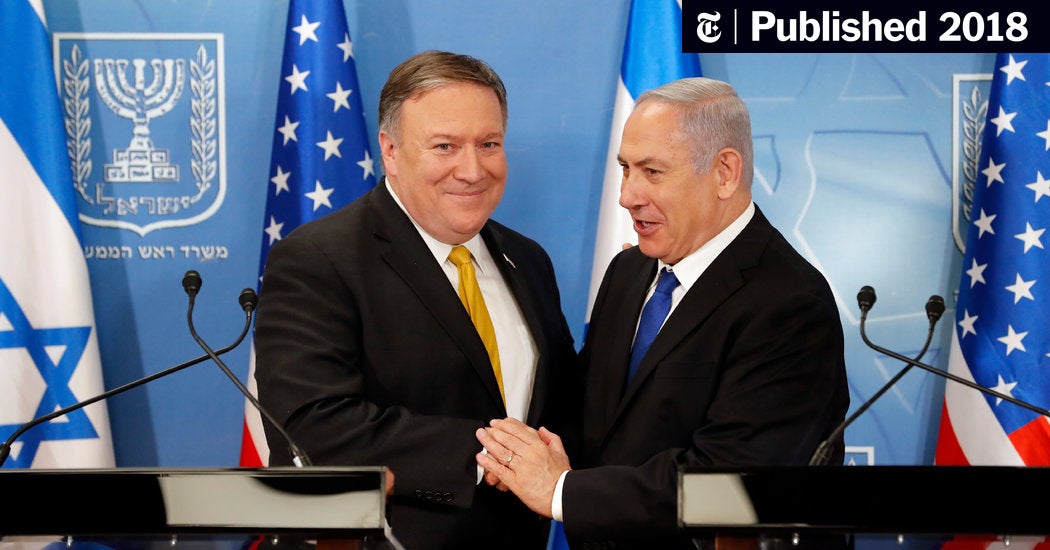 Secretary of State Mike Pompeo came to Israel in the midst of escalating protests in Gaza, but he did not meet with Palestinian leaders and kept the policy focus on Iran.

And you can be sure he’s negotiating something big.

As for the EU, they want us to remain in the Iran deal because they get a cut of all that cash!

All flowing into the likes of Hitler’s daughter’s coffers.

But… that begs the question. Iran wasn’t just giving money away to EU nations for nothing. Something was being exchanged. What did Iran get out of the deal, and what did EU nations get?

The EU were cover for the shipment of these nuclear materials.

I wouldn’t be surprised if they were providing more than that, but this implicates Merkel and so many others as entirely complicit in plotting the nuclear destruction of innocent Americans.

Our leaders sold us out.

Foreign leaders plotted to wipe us out.

And they did it all for a buck.

This is WAR! This is TREASON! And yes, its global in its scale.

That said, did anyone just catch Bibi’s live “powerpoint” presentation?

Sorry for the CNN link, but it’s the highest quality report I can find at the moment:

You better believe this is a HUGE deal, and a result of Netanyahu meeting with Pompeo.

As an anon put it:

66 thoughts on “Today, We Are CANCELLING The #Apocalypse. #NewQ #QAnon #GreatAwakening”