I made a #NewQ post last night, but was asleep by the time he pushed this last one to us. So I decided to wait and throw it in with the next drop:

The Democrats are terrified of Pruitt because he’s uncovered their “Slush Fund” which they hid inside the EPA, and which they used to funnel taxpayer money to all sorts of radical Leftists groups (and WORSE) across the country.

The EPA deposited more than $6.3 billion into an estimated 1,308 special accounts between 1990 and 2015, according to the agency’s website, and has spent more than half of the total. The agency doesn’t publicly report individual special account balances or expenses.

The “special accounts” are financed by legal settlements between the agency and parties responsible for polluting Superfund sites. Funds are deposited and spent without prior congressional approval. 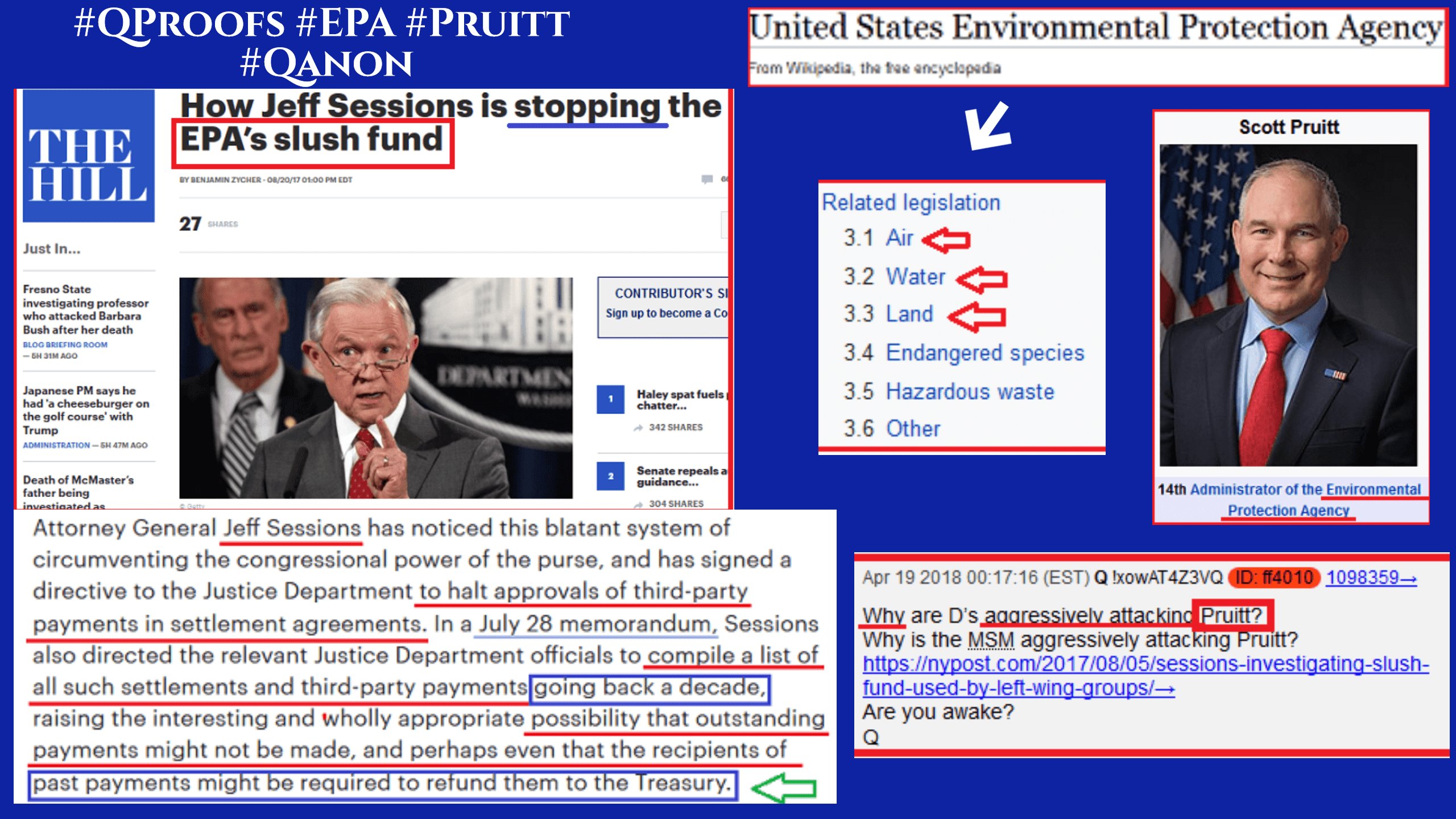 Best part is, he roped the media into talking about spending and accountability by purchasing an extravagantly-priced private phone booth. #FakeNews took the bait!

But refer back to this old #QAnon drop: 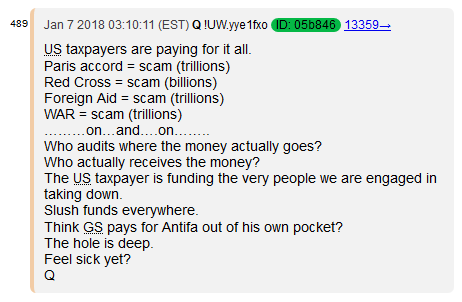 Is the picture becoming clearer?

But what can we do about all that right now? 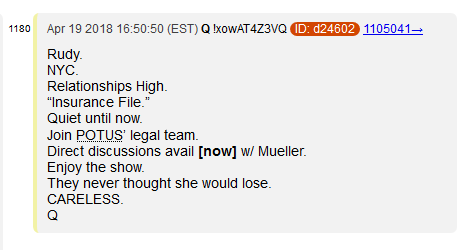 DID YA CATCH THAT?!? 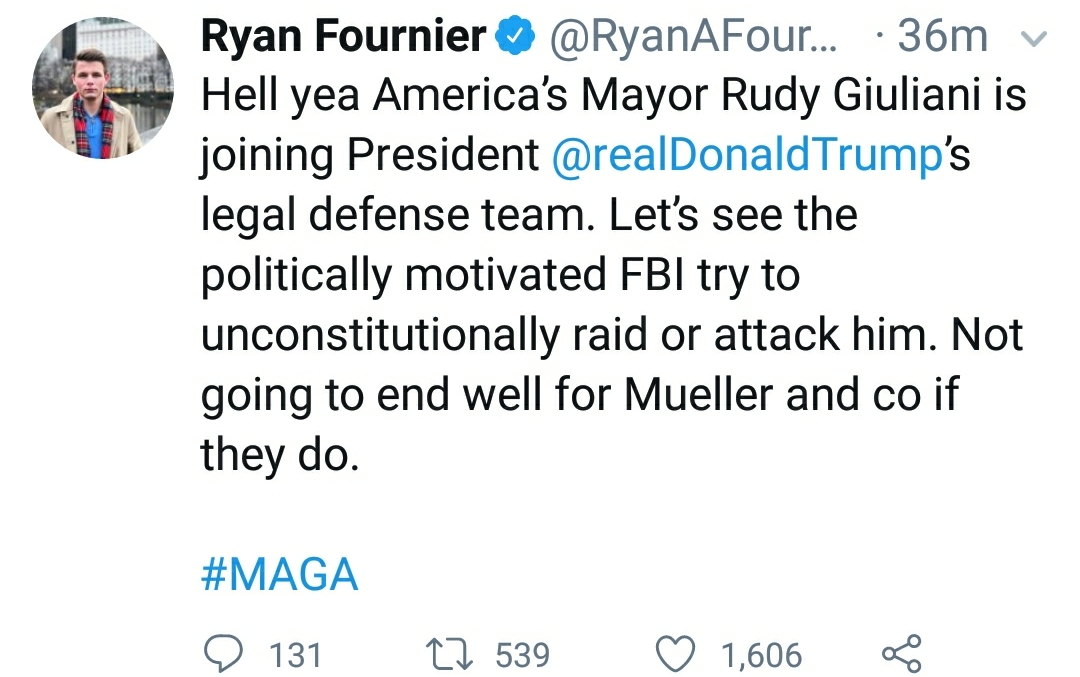 And NYC managed to preserve ALL of the “insurance” files on Weiner’s laptop!

Combine this with the recent warrant served to Jeffrey Epstein, Hugh Hefner dying, and well… 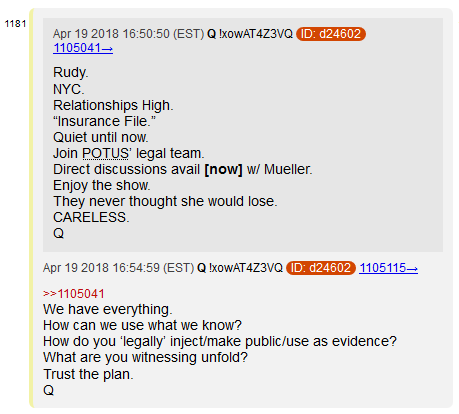 Perhaps… by having the FBI raid your offices and record everything seized as evidence. 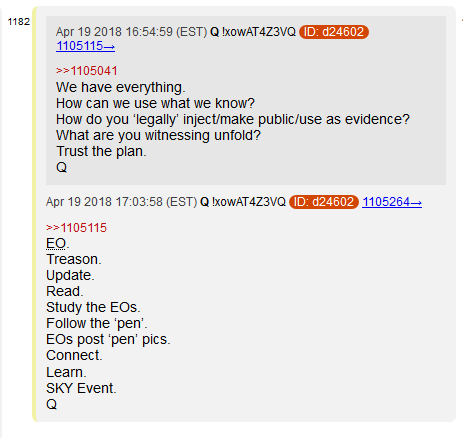 Q is referring back to the times he’s post pictures of the President’s pen, and asking us to review the Executive Orders from those dates. 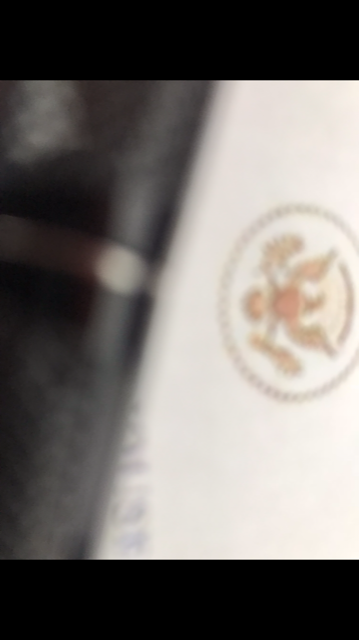 The executive orders signed on these days can be found here:

And the coup de grace:

Now… this is my speculation as to what EO’s Q is asking us to take a look at – but these seem the most relevant, within that span of dates.

There are others that are “closer” to the dates of the Q pic drops, but somehow I don’t think EO 13824: President’s Council on Sports, Fitness, and Nutrition is what Q wants us to look at.

Some highlights from these EOs, starting with Dec 20th:

Some may not realize this, but Trump declared a National Emergency with this EO, back on December 20th.

This grants him Emergency powers…

Namely the power to suspend the writ of Habeas Corpus, but also order sanctions, travel bans, freezing of U.S. based assets…etc:

The rest of the EO goes into great detail about what kind of criminal activities they’re seeking to put an end to, but most notably, it comes with a list of names in the Annex section: 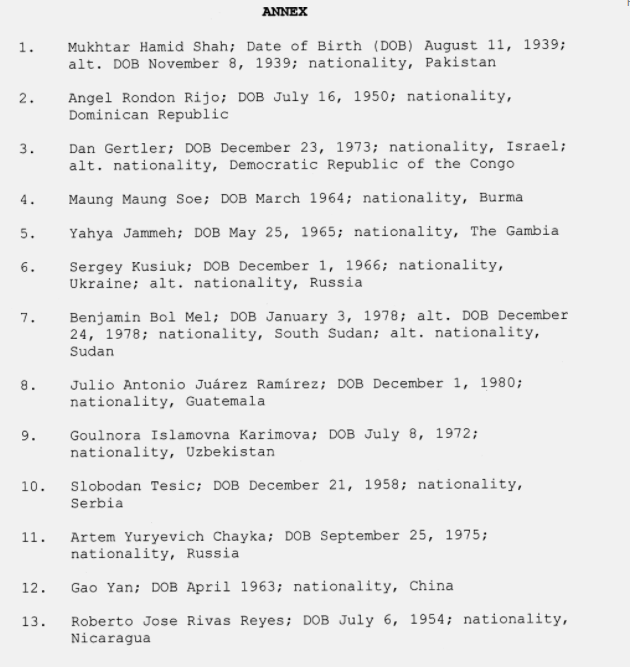 Wonder how many friends HRC has on this list…

Gitmo is legal, and they’re free to bring more criminals there:

Gitmo is not closing, which is what Barack Hussein wanted. It’s staying open and operational” 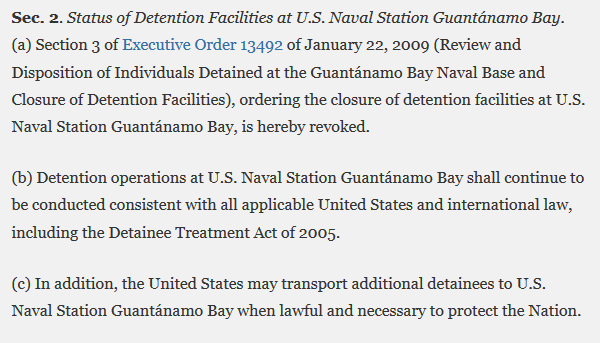 Those charged under a military commission get to stay there!

And lastly, from March 1st:

The EO itself is sort of boilerplate which basically says they’re updating the manual for Military Tribunals.

The manual itself is 456 pages long.

I skimmed it to see if I could find anything notable, and truthfully, it’s a lot of legal, procedural stuff. Minutiae that we don’t really need to be concerned with (as far as I can tell) – beyond Trump and team setting an inescapable trap.

No, have no fears. HRC, Obummer, and #TheCabal aren’t weaseling their way out of this court. Trump and team have gone over every detail to make sure no one escapes these Military Tribunals.

And if you’ve been following the site for a while, you know the probable location for these tribunals: Utah – far away from corrupt DC courts!

And you know what else they have in Utah?

Many of these on trial won’t even make it to Gitmo.

Beyond that, one last detail about Q’s post: SKY Event.

SKY is the callsign for Sky Harbor International Airport, in Phoenix.

AKA where the Tarmac Meeting happened.

But there is another possible explanation, however I feel this one is more remote: The Lyrid Meteor shower happening on the 22nd and 23rd:

Could be used as a cover for power outages or internet outages, or such. 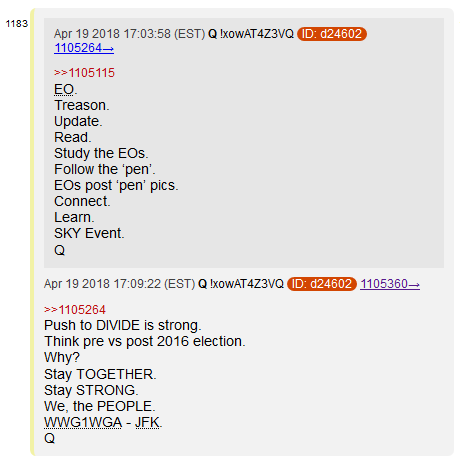 Why try to keep us divided? Because the Cabal is against the ropes, and we’re getting ready to deliver the KILLING BLOW!

The last hope of the Cabal is some kind of riot and violence!

Pelosi’s losing it in her old age. I don’t think any of us would have know this, had she not admitted it on stage. Anyway, here’s an excerpt:

And here’s the full link:

At her weekly briefing, House Minority Leader Nancy Pelosi (D-CA) answered questions on various topics, including North Korea, the farm bill, DACA (Deferred Action for Childhood Arrivals) and the Authorization for Use of Military Force (AUMF)) for President Trump.

But Q asks: “Why is this relevant?”

She’s made almost 200 MILLION DOLLARS despite her Congresswoman’s salary of 192,000 a year, and has long been a prime suspect in #Pizzagate, owning her own Satantic-themed pizzeria (not joking), called “Goat Hill Pizza,” in San Francisco.

She also lives less than a mile from the home of one of Backpage.com’s operators: 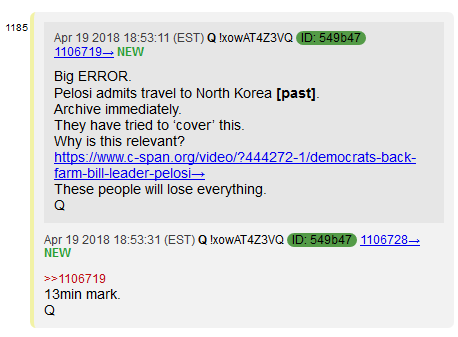 But beyond that, remember how NK was up until very recently, a Clown-operated state. They were given nuclear materials by Clinton through Uranium One, armed with missile tech by Elon Musk and SpaceX, and had their computer guidance systems rigged up by Eric Schmidt and Jared Cohen of Google/Alphabet.

So if Pelosi was over there with other Cabal-types, she was probably negotiating for something.

But is Pompeo the most senior official to visit NK since, though?

Probably not… But just like we didn’t know with Pompeo, we probably won’t know until after QTeam wants us to know. 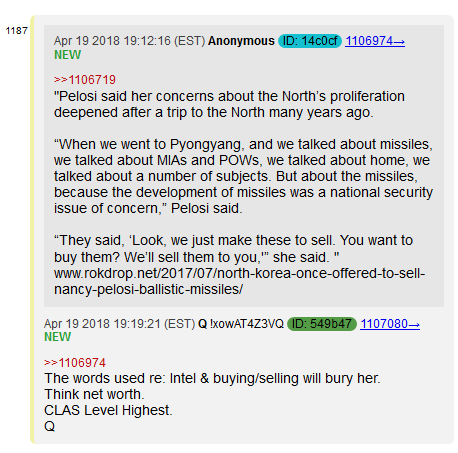 So that’s how she made her money; moving North Korean-made weapons systems around the world. BTW, she was only on that committee from 98, until 2001. Three years.

Pelosi is a friggin’ gun runner of the most heinous sort, selling missiles to who knows?

Probably the most evil scumbags on the planet.

So the likes of #Hussein funnel money to these groups, Pelosi’s relations move the weapons, and she gets to pad her coffers with taxpayers’ dollars.

And watch her giggle here, like a schoolgirl getting away with something naughty.

Q then orders the “Engineers” to mine everything on Nancy #Pelosi and 6 others.

That’s what the +1, +5 means. He wants profiles for all 7 of these Cabal operatives ready to go.

And right as I’m about to press “Publish,” Q drops this: 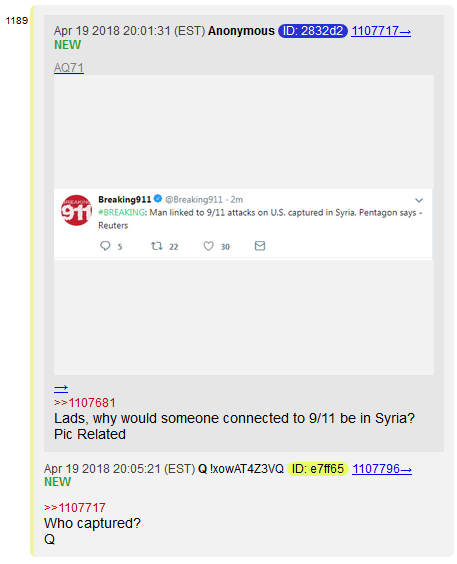 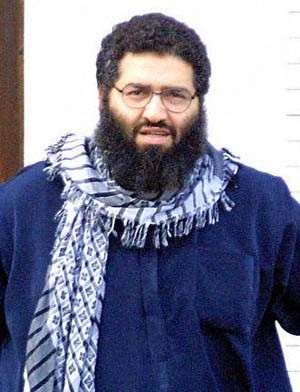 Man linked to 9/11 attacks on U.S. captured in Syria: Pentagon

A man linked to the Sept. 11, 2001, attacks on the United States, who was said to have praised "violent jihad," was captured in Syria by U.S.-backed forces more than a month ago, the Pentagon said on Thursday.

So we’ve got a mastermind Cabal operative here…

Hmm… wonder what they’ll get out of him?

Lots happening tonight. I’ll update here, if there are a lot of more drops… 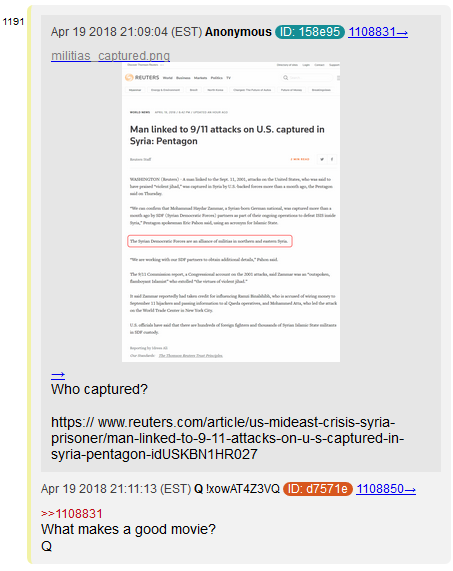 That’s the same article posted above.

WHOA! What a privilege! 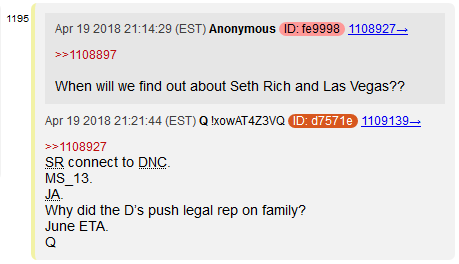 18 thoughts on “Pruitt, the EPA, Rudy Makes a Comeback, and Nancy Pelosi’s Illicit Fortune. All This and More in Tonight’s #NewQ! #QAnon #GreatAwakening”