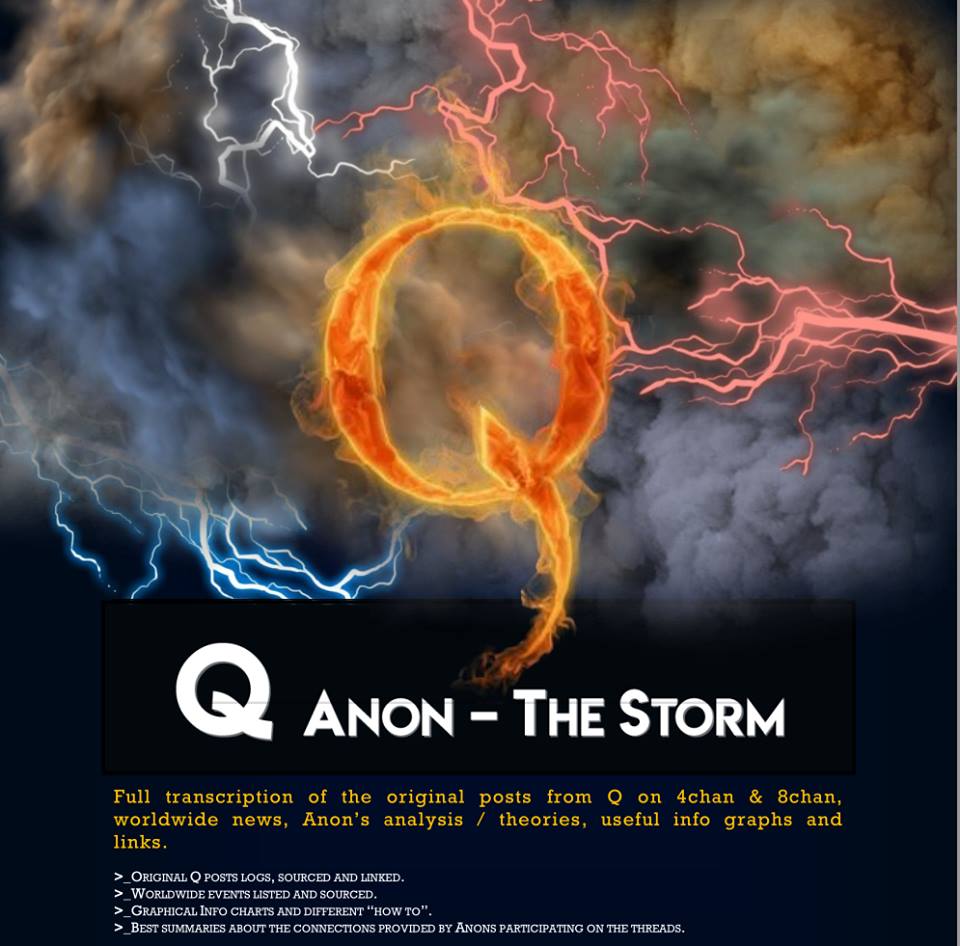 One of my most popular posts back on Facebook, before the Zuckenning, was my explanation/introduction to #QAnon. I’m going to attempt to re-create a newer, updated version of that, here, for reference purposes.

For those unfamiliar, QAnon is an Anon that appeared on the Chans back, late last year.

He claimed to be an intelligence agent with a Q-level security clearance, and has since been dropping “breadcrumbs” for the public to follow. These breadcrumbs are tidbits of knowledge, confirmations, answers to questions, and well… It’s kind of hard to sum up the specifics, because there’s been over 800 Q posts now.

How have we been able to keep track of this? Well, the chans have a feature called a tripcode, which allows him to secure his comms. (And on more than one occasion, he’s notified different chan administrators of security problems on their sites they needed to fix before he would start posting again).

Likewise, in response to some of the info presented, many just recoil and declare Q a LARP. There’s no way it could be real, right? Well… Q has a saying: “Future proves past.” Q will drop a breadcrumb with a key turn of phrase, or some hint. An event will occur in the public sphere. Maybe Trump will tweet out something with the same key phrase. And Q or other Anons will direct our attention to the drop, and yes, suddenly something that might not have made sense before now makes total sense.

But the important part to understand is that Q has been posting about the activities of the Deep State #Cabal with an unprecedented level of accessibility. Q himself says this is the highest level of intel any member of the American public has ever had access to.

Beyond that, Q says that specifically 8channers were selected for a special purpose. That purpose: to conduct large-scale information warfare and create a parallel construction.

Q says the crimes of the cabal are so great and so heinous, that when it comes out to the general public, the effect will be gut-wrenching, and most will have no idea how to handle it.

We’re paving the way for that moment, and conducting persuasive ops right up until it happens.

If you want to understand Q, you need to go back to the beginning and read his posts, the relevant answers given by other anons which contextualize his posts, and the answers to any questions collected by the community.

The absolute best way to do that is to download the Q Map PDF. This PDF is very detailed, while simultaneously being relatively easy to understand, which is no mere feat. It also gets revised with each new #Qdrop.

You can download the most recent version of the file here:

Alternatively, you can go to a functioning Q aggregator site, such as qanonmap.github.io/.

Prepare for a mind-blowing deep-dive when you get in to this. You’ll get to know all the key players on a level you never thought you would, learn secret, clandestine motives behind certain events, dive into alternate histories for things like the sinking of the Titanic, and more. This is the deepest and most compelling rabbit hole you could ever fall down.

I guarantee you it’s worth your time.